Where Is the Love Black Eyed Peas?

One can be easily captivated by “Where is The Love” by Black Eyed Peas, not because he/she is a fan, or lover of this particular musical genre, but because when listened carefully the lyrics express the hidden feelings of a generation, and of society in general. It describes how the war and terrorism are affecting out the world and it focuses on the bad decisions and poor role models in society. It talks of bombing, terrorism, discriminations of all kinds, and the type of values that we as a nation are not showing the youth of today.

Don't use plagiarized sources. Get your custom essay on
“ Where Is the Love Black Eyed Peas? ”
Get custom paper
NEW! smart matching with writer

It is to raise the awareness on how much others are suffering in the world and for people around the world to reflect about the events that show the ugly and dirty side of the world. It encourages us to spread some love and not to discriminate. ”Where is The Love”, is also written to free people from discrimination. This song was written around the time the World Trade Center, in New York City was attacked.

This song uses a pathos appeal because throughout the music video they used children that are facing this hate-filled violence, and they’re praying to the sky asking for help. This song broadens the knowledge of what’s really going on in today’s society. Also in the song it had a question mark in a rectangle which was surrounded by a white border. They used this symbol to represent the question “Where is the love” throughout the song.

This symbol is used throughout the entire song. For example the question mark was used on the World Trade Center. It was also used on the negative things that surrounded the community and children, such as the alcohol bottle the man was purchasing, and the violent video games the children were playing. This song brings out the cries from our society that’s facing discrimination. It also describes how all different races are desperate to find out where is the love. Another thing that struck me was the background the rapper was rapping in front of, “We are not a minority”. According to “Pacific Standard Talk”, Javier Montanez created this piece to raise awareness in the Mexican culture. It expresses a demanding and striving for equality. The fence in the portrait represents a force in mural, and the painting is trying to escape from discrimination and the corrupt society. The message behind the fence brings awareness that we are all equal to one another. Finally the colors painting represent a sense of unity, harmony, and coming together.

This song opens the eyes of American. It points that yes people in other countries aren’t doing good but look at what we’re doing. We’re opposing and killing each other. We’re poisoning our children’s mind with the pornography, and violent entertainment. Throughout the song it stated that “People killin’ people dyin’, Children hurt and you hear them crying, can you practice what you preach and would you turn the other check”? This song is exactly what the title is asking, where is the love? This world is so corrupted. The violence and the problems are continuing to arise. We have forgotten that we are human beings because the hate has turned us into barbarians. If we embrace the fact that everyone is different and learn to accept to love each other for our differences, then maybe we can overcome our problems and live in peace. We should practice what the bible says; love is patient , love is kind. It does not envy, it does not boast, it’s not proud. It is not rude, it is not self-seeking, it is not easily angered, it keeps no wrong doings. Love doesn’t delight in evil but rejoices with the truth. It protects , always trust, always hopes, and always perseveres

Violence and terrorism are escalating. These things have become a common issue. This is a great song about present day problems and how society changes with them. “Where is The Love” is a beautiful song it talks about how the world is today. It talks about how we need to do as we say and proclaim and not turn our cheeks against our words. At times you have to tell lies to get out of trouble but our world with the people in it have lied so much it’s not funny. This world we live in is confusing and demanding from the average human it is not humane. This song is very broad and talks about how cruel this world really is and how we need to love each other to make it through all of this. If people say hate fills this world they are absolutely right without any question. Love has evacuated the nation without a doubt. No one cares about the people who live in this world
they only care about themselves and what they can get out of it. Our society needs to listen to understand what this world has come to and what we need to change. We need to change some of the things we progress through our minds. Surround ourselves around positive influences. Stop allowing our children to displaying violent entertainment. Parents need to teach the concept of right and wrong and set examples. The best way to approach this, is to address the situation. If nothing is said or done then corruption of this world will continue to expand in this country.

Where Is the Love Black Eyed Peas?. (2016, Apr 01). Retrieved from https://studymoose.com/where-is-the-love-black-eyed-peas-essay 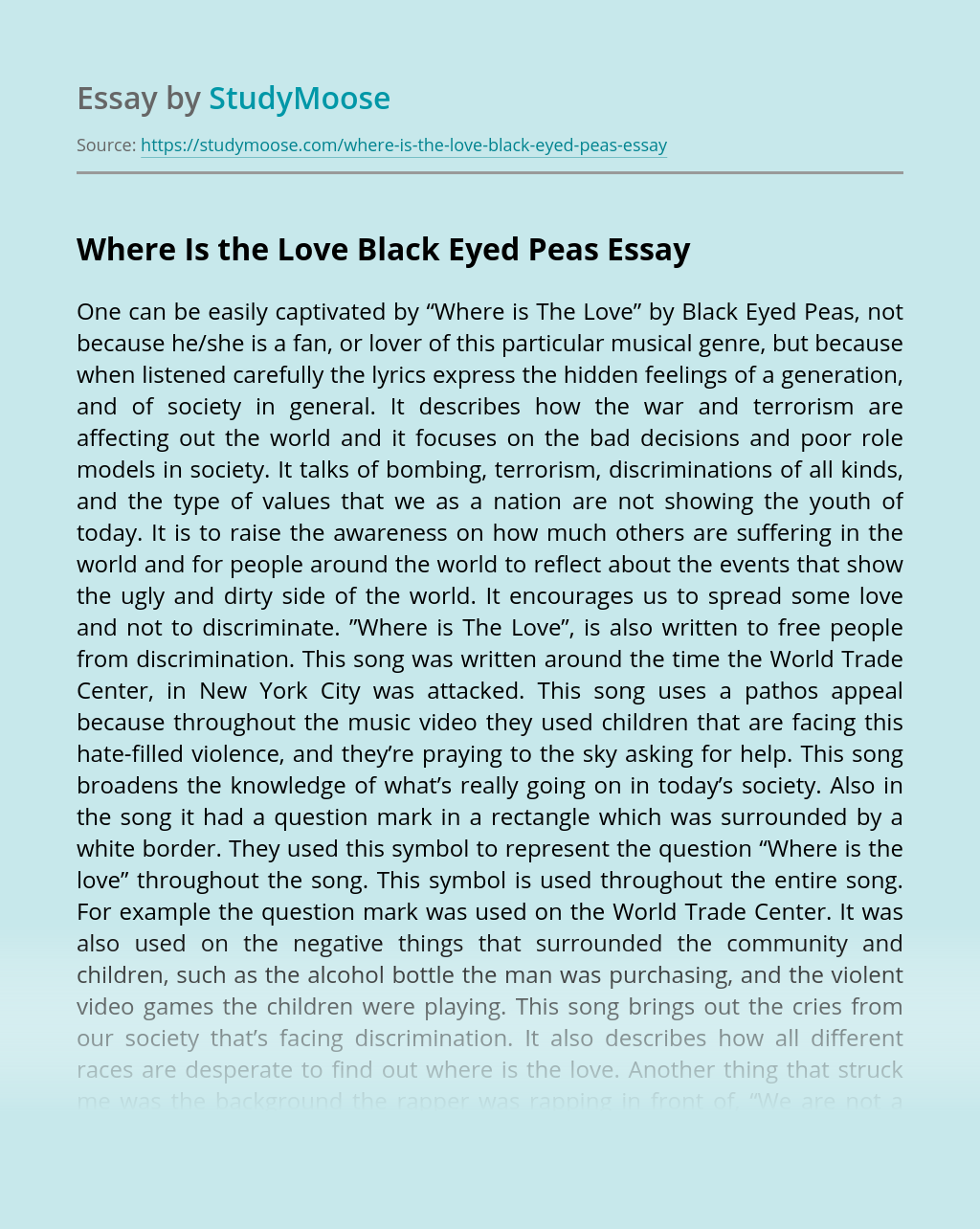