Block chain Technology is spread all over the world in various sectors. Blockchain Technology is transparent in various areas such as supply chain management, international payment, interbanking, and so on. Recently rapid increase is reported in incidents of scrutiny and security breaches compromising users’ privacy call which leads into question about blockchain technology security. These days due to excessive usage of e and m i.e; internet and mobile third-parties collect and control massive amounts of personal data and transaction.

Don't use plagiarized sources. Get your custom essay on
“ When Malicious Attacks Meets Blockchain Technology: An Insight ”
Get custom paper
NEW! smart matching with writer

This paper provides a review regarding the intersection of dangers ,malicious attack ,Cyber crime and risks relying on blockchains. This paper we describe, explore and analyze the security issues and highlight several attacks that might be occurred in the proposed system. Is blockchain technology capable to fight against the malicious online activity i.e. blockchain technology is safe or not?

A blockchain is a is a discrete database records or public guideline of all the transactions or digital events that have been implemented among all the participating parties .Blockchain extent approval ideal deals with brokers by way of the Internet itself. The blockchain contains a valuable records of every single transaction which made by user. Blockchain technology is best described as one that enables records to be shared by all network nodes, updated by miners, monitored by everyone, and owned and controlled by no one.Blockchain called as the backbone of the whole crypto-currency system.

The Blockchain is typically accessed by a peer-to-peer network, observing to a protocol for validating original chunks. Once recorded, the data in any given chunk cannot be altered retroactively without the modification of all blocks and knowledge of the network majority. Bitcoins are a crypto-currency and digital payment system. Bitcoins exist only in the cloud, like Paypal, Citrus or Paytm. Even though they are virtual, rather than physical, they are used like cash when transferred between people through the internet.Blockchain technology and the bitcoin have today become a similar platform where societies have been carrying out their normal transactions.

All online transactions rely on trusting someone to verify the truth it can be a certification authority telling us certain digital certificate is trustworthy,a bank telling us that a financial remittance has been deliveredreliably to a creditor ,an email services provider verifying that our email has been delivered ,or a social network such as posting of life events on social network like Facebook.The real fact is that we live our life precariously in the digital world by relying on a central trusted entity for the security and privacy of our digital assets[4].These third party sources can be hacked and hateful attack.Although blockchain technology prevents several types of hateful attacks and reduces many risks, it does not remove all types of attacks [2]. This paper has review the blockchain technology for identifying online fraud, identifies certain fraud and malicious activities that the blockchain technology can effectively prevent, and makes recommendations for strategically fighting various attacks to which blockchain technology may be weak. Further research is necessary to recover the technology and related anti-attack measures for digital identity theft, money laundering, and hacking.

The block chain is the source of where the data is stored and all old transactions are secure transactions by storing them in a Merkle Tree [2] [5] that prevents an operation can be carried out for duplicate or without the corresponding funds or double spent. – Mining [1] .The mining process is unique and is the basis for the creation of the block chain and the generation of new currency. No mining there is no way to guarantee blocks consistency. Also, this method provides satisfaction to BitCoin generating new currency. BlockChain, makes it very attractivetechnology to solve the current Financial as well as non-financial business problems.A blockchain is a continuously growing list of records, called blocks, which are linked and secured using cryptography. Now a days cyber-attacks have become even more complicated and advanced. The evolution of crypto currency and Blockchain technology has been so prompt, that even those who haven’t listen and knowledge about crypto-currency or blockchain. . Fig 1: HowBlockchain Technology Works [2]Features of Block chain technology: SHA256 Hash Function: Hash function is useful for a one-way’ cryptographic function, the output is not encryption’ i.e it cannot be decrypted back to the original text. Public Key Cryptography: This technique helpful for the user to create a set of keys referred as Public key and Private Key. In this technique, Public key is shared with others whereas the Private Key is kept as a secret by the user. Distributed Ledger & Peer to Peer Network: All the blocks of data is spread among all users by Blockchain technology , i.e., the ledger has no main location where it is stored. Every user are on the network having their own a copy of the ledger.

Proof of Work: The online message has a unique identity .It gives us proof of ownership of document, online successfulpayment message. It gives the proof that the transaction is genuine.

They provide transactions are absolute .Public block chain can hide the actions of user transaction.An designer liable for evolving and optimizing blockchain protocols, crafting the architecture of blockchain systems, developing smart contracts and web apps using blockchain technology are commonly called blockchain developer,but somewhere between the two private and semiprivate sector block chain developers chose public and private blockchain. That time Government which are not responsible for implementations of blockchain ,limiting the users who may participate in the blockchain and bitcointechnology. Blockchain technology includes features necessary for creating trust inan information system namely many unknown stakeholders, fraud and a missingcommon framework, lack of transparency, and different IT capabilities.Therefore, it is essential to consider carefully, in which cases the use of blockchain makes sense. Personal data, and sensitive data in general, should not be trusted in the hands of third-parties, where they are susceptible to attacks and misuse.I

In addition to that blockchain technology is best described as onethat enables records to be shared by all network nodes, updated by miners, block chain technology may offer ,an understanding of the attendant risks and dangers is necessary.Blockchain technology enables decentralized, trustless, encrypted transactions and events to be recorded and stored publicly, optimists believe it can prevent online fraud and attacks [8]. To assess these capabilities of blockchain technology, first check existingtechniques for battling malicious attacks in cyberspace.

The complexity of the miningprocess.RecordHacking Records in the ledger are modified or fraudulentTransactions are inserted into the ledger. Distributed consensus51%Attack A single miner node with more computational resources(51%) than the rest of the network nodes dominates theverification and approval of transactions. Detection techniques; wide adoption of the blockchain technologyIdentityTheft The private key of an individual is stolen. Identify and reputation blockchainsIllegalActivities Parties transact illegal goods or commit money laundering. Detection techniques; laws and regulationsSystemHacking The programming codes and systems that implement ablockchain are compromised. Robust systems and advanced intrusion detection methods. Table 1: Malicious attacks to blockchain and defensive measures[8]

Personal data, and sensitive data in general, should not be trusted in the hands of third-parties,data, since it is computationally tamper-proof.Although blockchain technology prevents fraudulent behaviors, it cannot detect fraud by itself. For this existing system monitored and detected by supervised machine learning and data mining algorithm which is based on patterns. Todetect outliers by using deep-learning neural networks, support vector machines, and Bayesian belief networks for fighting various malicious attacks to which blockchain may be become at risk. Government understand mechanisms and impacts of blockchain technology and improve government laws, polices and regulations to govern the use of blockchain technology. 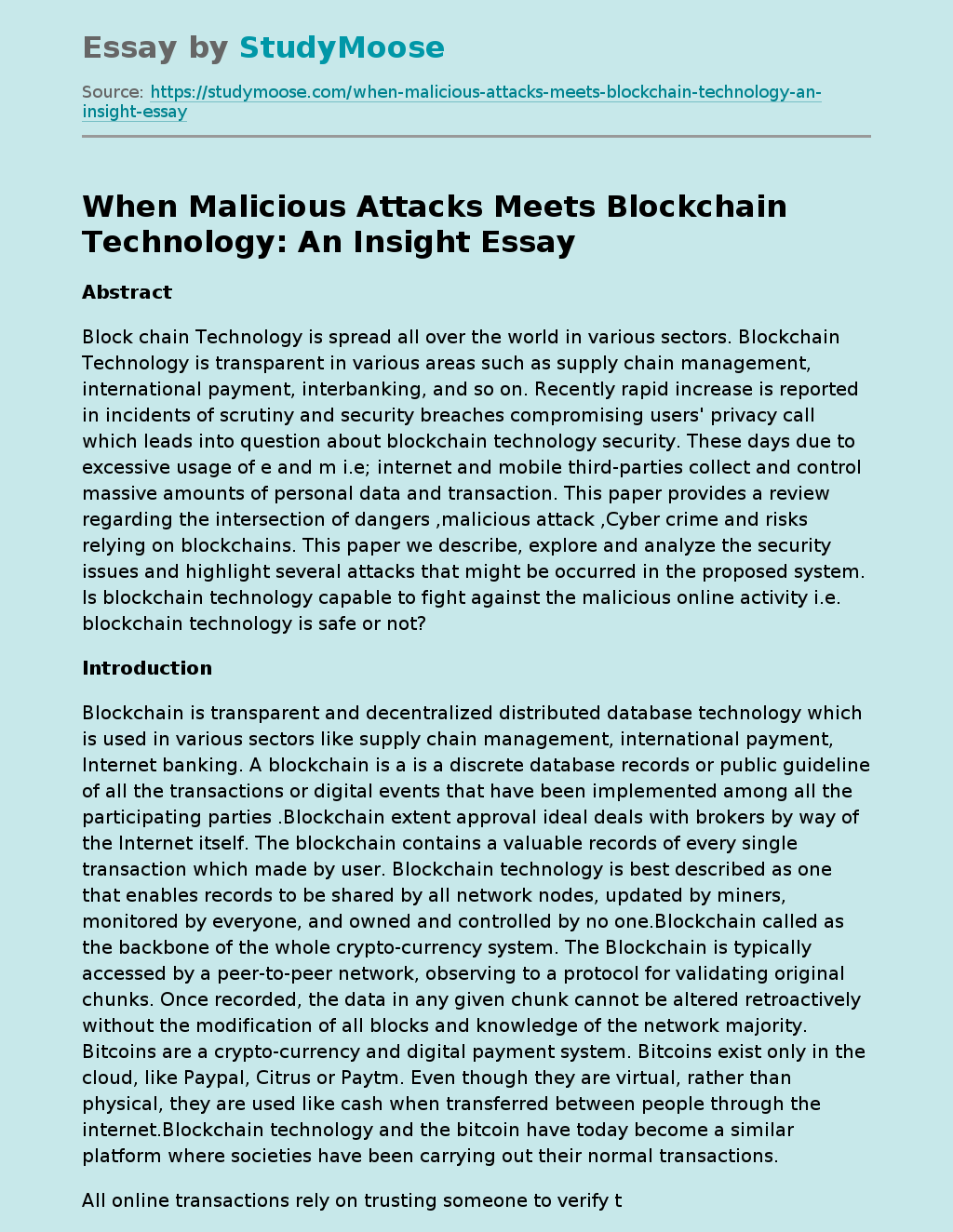