Blockchain technology and the place of blockchain in financial management

Money can be defined as a generally accepted exchange tool, the common value measure, as being a means of payment, being a tool of value storage, being an instrument of economic policy. The use of money by citizens can be ensured by the state and it can be spontaneous without such power.

The features to be found in money can be summarized as having value stability, portable, divisible, durable, uniform and uncommon.

Mankind had exchanged the goods and services before the invention of money.

Don't use plagiarized sources. Get your custom essay on
“ Blockchain technology and the place of blockchain in financial management ”
Get custom paper
NEW! smart matching with writer

Afterwards, some goods such as sea shell, ivory, iron and salt were first used as a means of exchange, which could be called the commodity money. After then the gold and silver are rise out of the ruck. They are considered to be money, because they are non-toxic, solid, brightly colored, non-flammable, non-corrosive and easy to mine.

The evolution of money

The commodity currency system has evolved over time into the representative monetary system. Moneychangers and banks, in exchange for commodity money, if desired, can be converted into commodity money, printed coins.

In this system, the gold or silver was kept as much as the total value of the money printed.

Due to the failure of gold reserves to adapt to economic growth in the 1920s, the gold or silver indexing of money value and the limitation of money supply to gold reserves were abandoned.

After the abandonment of the gold standard, it was decided that many countries made their own currency based on the only American dollar with the participation of 44 countries.

In the course of time, in addition to the nominal paper money, the digital currency which is stored and transferred electronically is being used. Digital currencies in bank accounts are representative of nominal currency notes. The last step is the crypto-money. They do not have a physical reality that they represent, nor do they have an authority to support them. They are under the guarantee of a supervisory authority issuing them. Confidence in crypto-money is ensured by the belief that the majority of those who use this system will not do wrong.

Due to the excessive volatility in the values ??of the crypto-money, they are said to be unable to fulfill their functions of being a means of exchange and a measure of common value, therefore they can not be considered as money in their current state. However, the possibility of a more stable currency in the future is also raised.

The Bitcoin virtual currency ID is generated based on a registry that is open to the control of all users who are involved in an encrypted computer algorithm called Blockchain to destroy various security risks. In other words, the blockchain is a distributed database that provides encrypted transaction tracking, allowing each information to be processed in blocks and with advanced encryption algorithms and linked to each other without being connected to a center. The blockchain is defined as the data structure representing an account movement record and is securely signed in a virtual way. These account movements take place on a network and are constantly updated. With a decentralized and complex security network, the system can operate safely and quickly without the need to control it from a single center.

The block chain is used not only in the flow of money but also in many systems because it is fast, safe and easy to monitor and it provides convenience in three basic points. The first is low cost and fast processing without the need for any intermediary. Secondly, the possibility of corruption is very low due to lack of central control, and finally the ease of follow-up and control at the transfer of assets enables the highest level of control. The main problems related to the system are summarized as; the complexity of a complex structure and the absence of a standard, the need for the development of the technology to be developed, the problems of system performance, the risk of control over some systems, high processing costs and high electricity consumption. O. Dwyer & Malone had mentioned in their work at 2014, the estimation is that the electricity consumption for the bitcoin infrastructure is around 3 GW, which is the approximate electricity consumption of Ireland. It is known that Blockchain technology is not only associated with crypto-money, but it is used as a system with high reliability in many areas requiring technology infrastructure, especially in areas such as banking. It is believed that the system will have a very high modifying effect on commercial activities in the coming years.

According to Figure 4 and Figure 5, the exact ends hide the blocks they’ve verified, so they don’t hide any blocks they can’t verify. All ends of a block have the same meaning that it is reconciled on the block. In rare and short-term transient situations, recently added blocks may vary at some ends. However, this problem is solved automatically by the system in a short time.

All the processes in the block are summarized in pairs, and the summaries are summarized in pairs. The result is a single summary. Each block contains the hash of the preceding block. Hash can be followed by the first block. When a change is made to any block, such as when a user tries to write extra money to him/her, it is rejected by the system. Because the next block will be incompatible with hash.

Blockchain technology is developed about 25-30 years ago. It is said that this technology is not only in money and financial systems, it is also a candidate for use in many areas that require central registration and it has serious advantages. As a result, Satoshi Nakamoto had developped a self-functioning monetary system using this technology.

Bitcoin (Crypto-money), which is called digital or virtual currency and the block chain system in its infrastructure means the safe and fast money transfer with the principle of approval. Its infrastructure means that for instance; whenever we liken to the internet technology to Block Chain, we can liken to the e-mail service which is an application inside the internet technology to Bitcoin.

Whenever the Bitcoin system was installed by Satoshi Nakamoto in 2009, the real Bitcoin system was installed in the pool, and the amount of Bitcoin was limited to 21 million units. Bitcoin is currently circulating in the market in excess of 16 million. In the meantime, without the intermediary role of a financial institution, on the other hand, electronic money transfer to the other party was created and the chain system prevented double payment.

The more difficult technical problems belong to the system has been announced by the System Administrators and whenever somebody solve it, they have been rewarded with Bitcoin and the Bitcoin amount in the market increases just like money supply. Those who have professional knowledge and technical skills, can obtain a certain amount of Bitcoin if they solve the problem, while those who do not have the technical infrastructure, can buy over the market price. Since the number of bitcoins is limited, as long as the bitcoin’s value increases, also its demand and its investors increase and hence the bitcoin’s value increases incrementally.

Bitcoin is used through the internet in the market, the virtual currency that is independent of the central authority or the intermediary institutions, in other words, it refers to only one of the money called crypto-money (encrypted money). Some examples of almost a thousand different types of crypto-money are Ethereum, Ripple, Litecoin, Dash, Monero, Neo, Moisture. However, Bitcoin is the first widely emerging digital money in crypto-money and is now widely used. In the world, the total digital money market has increased by 900 percent in the last 10 months and approximately 65 percent of this amount (approximately $ 130 billion) in this market, which has already exceeded 200 billion dollars, is in Bitcoin. Common features of all such money; as we are accustomed to, they are not registered as tangentially as the Dollar, Yen, and other currencies, they are not connected to the central bank of any country, they are not affected by the economic situation of the countries; the lack of threats, the value of the value of the supply and demand varies according to a value, called a block chain called encrypted process control stored in a database.

There are around 1500 new crypto-money in the market which is not limited to Bitcoin and the market size has reached to 450 billion USD today.

Regarding with Bitcoin, the speed capacity has been reduced due to network payments that cannot progress at the sufficient speed, and the transaction costs have increased in terms of both price and time. As a result of this situation, other crypto-money prices, which are a bitcoin alternative, have started to be in demand in the market. As of 1st of August on 2017, the system, which reduces the network density and processes three payments per second, converts the system into a system that will process twenty-four payments per second, has been realized in a very short time and in exchange for only a few cents.

There are many academic publications that the money will be converted into digital money in the future. The definition of electronic money can be positioned in the form of cash in a virtual wallet, which can be stored with the help of a technological tool in the simplest way. Bitcoin dry varies according to market demand and supply. It is not connected to any real currency. There are several platforms where real money can be exchanged with bitcoin. In addition, people who want to use bitcoin, this money by selling products or services, or computer products, and the process of mining are obtained by a process. Mining is very complex and the process of dissolving the mathematical formulas with computer power is called, and mining and computer systems, thanks to computer systems to solve a certain number of new bitcoins are given, new bitcoins are produced in this way. Bitcoins purchased through certain software that users download to their computers are stored in the digital wallet that is still protected on the computer. With Bitcoin, a currency circulating transparently into the market has come up, with users gaining a monetary value as if they were in their own banks. Thanks to Bitcoin, a resource is created which can be delivered instantaneously, and this transportation can be controlled, which is ready for immediate use, without the need for the creditors to pay credit card at the time of payment.

Blockchain technology and the place of blockchain in financial management. (2019, Dec 18). Retrieved from https://studymoose.com/takehome-ersin-erduran-example-essay 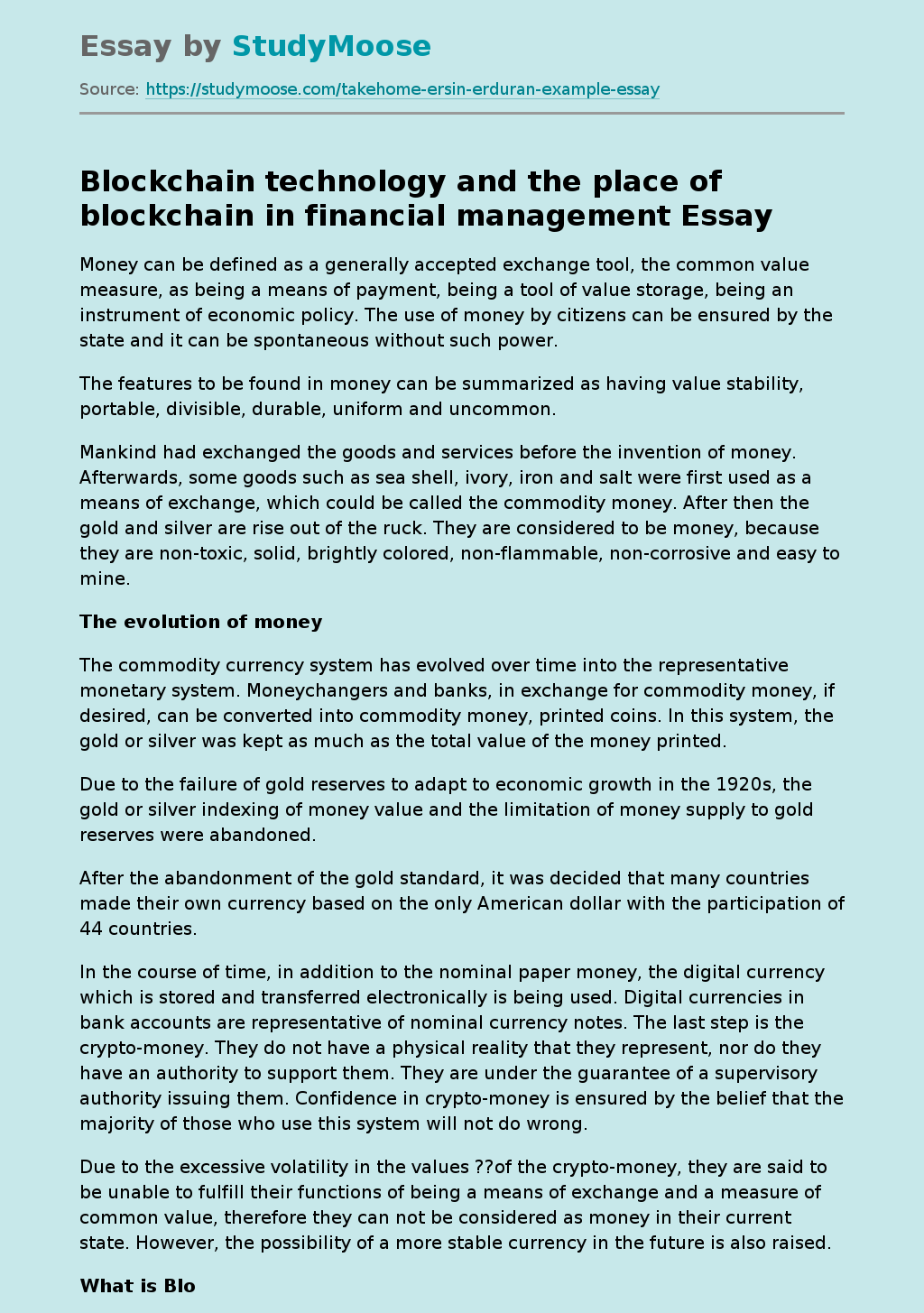