What were the responses of the Catholic authorities in the sixteenth century to the challenges posed by the Lutheran Reformation?

The Catholic Church responded to the challenges posed by the Lutheran Reformation.

Don't use plagiarized sources. Get your custom essay on
“ What were the responses of the Catholic authorities in the sixteenth century to the challenges posed by the Lutheran Reformation? ”
Get custom paper
NEW! smart matching with writer

Catholic authorities got rid of corruption within the church. For example, absenteeism, simony, pluralism, and the selling of indulgences, were abolished. Bishops were no longer able to practice absenteeism or pluralism. They were not able to hold more than one church office at a time nor were they able to be absent from the spiritual duties of the position they held. Furthermore, simony was no longer tolerated. People were no longer able to purchase church offices.

Catholic authorities began affirming the beliefs of Catholicism. Authorities stated faith and good works were necessary in order to achieve salvation. They had also stated they believed in transubstantiation, where the bread and wine would turn into the body and blood of Christ during consecration.

Catholic authorities had acknowledged the 7 sacraments and Ideas such as monasticism, celibacy of the clergy, and purgatory. The Pope’s teachings were infallible and the Pope continued to interpret scripture for the people. Reaffirming Catholic beliefs was an important process because it allowed people to see the difference between Protestant and Catholic theology.

Catholic authorities would also check the growth of Protestantism. The Catholic Church began censoring books that contained Protestant thoughts and ideas. People would be severely punished if they possessed a censored book. Moreover, catholic authorities limited the printing press because it was able to spread Protestant ideas. In addition, catholic authorities began the Roman Inquisition because they wanted to end heresy against the Catholic Church. Ignatius Loyola was able to create the society of Jesuits. The Jesuits began educating young Europeans about Catholicism and even opened schools. The Jesuits were able to limit the spread of Protestantism by bringing Catholicism among European people. The Ursuline order of nuns had set up schools for girls and wanted to go against heresy through education. Furthermore, baroque art, had also limited Protestantism. Baroque art would consist of religious themes that had emotional involvement and brought people closer to god. These steps taken by the Catholic Church were able to limit the growth of Protestantism.

What were the responses of the Catholic authorities in the sixteenth century to the challenges posed by the Lutheran Reformation?. (2016, Mar 07). Retrieved from http://studymoose.com/what-were-the-responses-of-the-catholic-authorities-in-the-sixteenth-century-to-the-challenges-posed-by-the-lutheran-reformation-essay 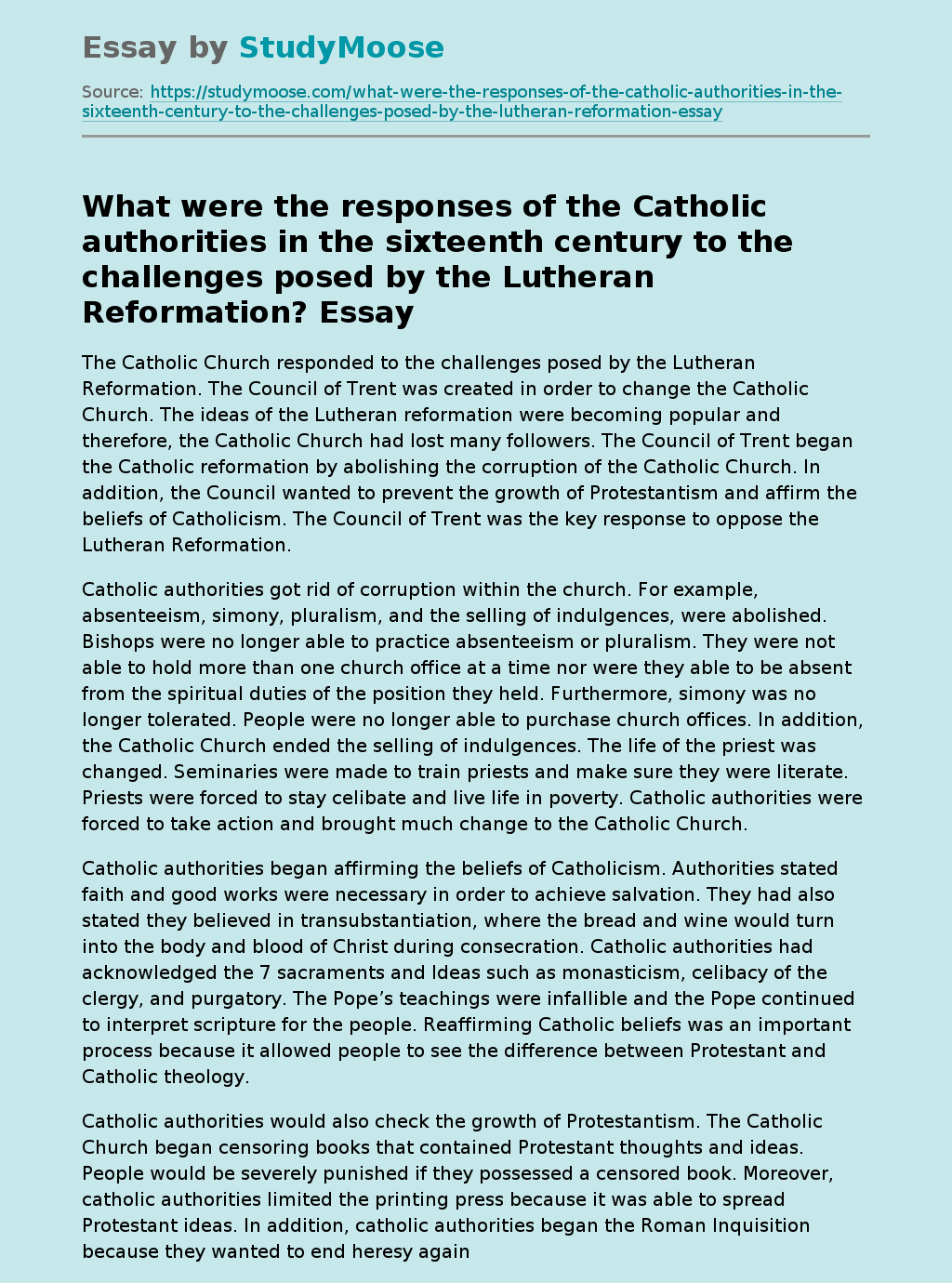