In the article,“ What We Really Miss About 1950’s,” Stephanie Coontz states that “In a poll by the Knight-Ridder news agency, more Americans chose the 1950’s than any single decade as the best time for children to grow up. ” However, Coontz has her own view of the 1950s. Using strong and logical facts, she informs the audience of her own opinions about this decade. Although the nostalgia of the 1950s is vastly strong in some people, some fail to notice the negativity and reality of it.

Turn in your highest-quality paper
Get a qualified writer to help you with
“ What We Really Miss About 1950’s? ”
Get high-quality paper
NEW! AI matching with writer

Coontz does not believe that the fifties were the best because there were changes in values that effected racism and sexism discrimination against women. Unlike we do now, the fifties did not offer equal rights but offered less rights to people. Coontz speaks of the reality of poverty, racism, and sexism, issues now discussed in the world. It was a time of change and success in the face of all the social problems of the thirties and forties.

Coontz argues that it really was a good time for a lot of Americans because the country was coming out from World War II, so people were happy about victory.

There was a high level of anticipation in people to start over again. People wanted to form families; they bought their first homes quickly, and wanted to be involved in their communities. Her statement confirms the reality of the fifties. For example, well-paid jobs were much simpler for men to find because of the low fertility of previous the generation offered many jobs and companies seeking to increase production were competing for workers, therefore wages raised.

Life was much easier and simpler, so it seemed for people.

It was an era right after the war and people were putting their lives back together. The essay states out that the fifties was probably the best time for kids to grow up, maybe because couples were trying to maintain the family, therefore the divorce rates were low. This decade was also known as the nuclear family era, because marriages and birthrates were also at very high points. In her essay she goes on stating facts about how the fifties compares to other decades. For example, using previous birth rate and age statistics to the present statistics.

Coontz argues, “The lack of media coverage of problems such as abuse or incest was terribly hard on the causalities, but it protected more fortunate families from knowledge and fear of many social ills. ” It is apparent that she is convinced that not everyone felt that the same way about the living situation. She describes the fact that people defined as “others” like African–Americans, Puerto Ricans, Jews, the poor, gays and the “red” experienced great hostility. In conclusion, the fifties were not ranked the best period for nothing.

There were certainly a lot of things that were happening that we would love to have now, Coontz states. It was a time when families stayed together, when work led to better pay and it was a time when you did not need to have a college degree to be successful. On the other hand however, it was also a time of prejudice, a time when peace and wealth was succeeded by discrimination and lack of knowledge. Stephanie Coontz reminds us that things weren’t quite as perfect as they seemed by using strong and logical points. 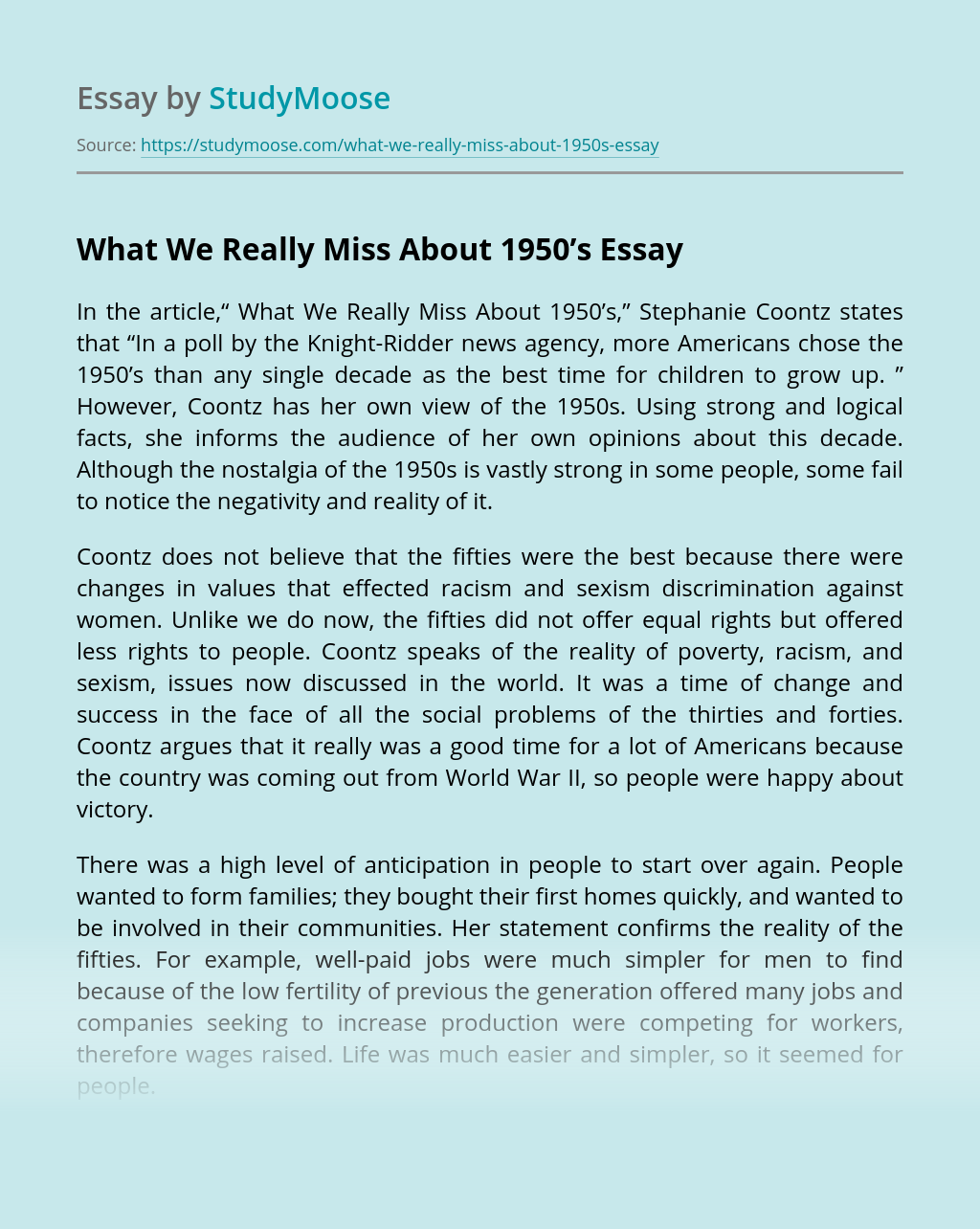 Turn in your highest-quality paper
Get a qualified writer to help you with
“ What We Really Miss About 1950’s? ”
Get high-quality paper
Helping students since 2015
Stay Safe, Stay Original