What Was the Dust Bowl?

Imagine this. You’re living in a time period where you are surrounded by dust 24/7, not being able to breathe or see, no food sources available, and you’re not even able to get into your own house without a huge amount of dust inside. Well, this is what happened during the 1930s. Intense dust storms hit the western horizon. Many people died and were not only struck with the depression, but their land was ruined and lots of people were unemployed.

Don't use plagiarized sources. Get your custom essay on
“ What Was the Dust Bowl? ”
Get custom paper
NEW! smart matching with writer

One of the reasons was the lack of short grass. A sheepherder from Texas said “…Grass is what holds the earth together.” (Doc B) Even though the grass in the southwest wasn’t very tall, the grass acted as a barrier for the earth, preventing the soil and sand from blowing around everywhere.

When the farmers plowed the grass, there wasn’t any more grass after and they left the dirt uncovered and bare, and when the winds struck, all the dirt was flying everywhere creating massive dust storms.

The next reason is, the heavy farming machinery (tractors and plows) that was being used destroyed the plains and eventually led up to the Dust Bowl. Fred Folker, a farmer, purchased and used a tractor that “…did the work of ten horses” (Doc C). Using this new tractor, farmers were able to do the work a lot faster and cheaper.

The number of acres harvested from 1879 and 1929 decupled. (Doc D). As a result of the new machinery they used, it crushed up the dirt into smaller pieces and could be swept up by the wind very easily.

The final reason for the cause of the Dust Bowl was the lack of rainfall and droughts. The great western explorer, John Wesley Powell discovered that the minimum amount of rainfall for success in farming was 20 inches. (Doc E). However, the average rainfall decreased from starting at 33.4 inches in 1923, to 12.74 inches in 1940. (Doc E). Clearly, the amount of rainfall wasn’t enough to grow crops, that was how massive droughts were caused.

Although, the Dust Bowl was a very depressing and stressful time. Many people and families were hit by these crazy dust storms and depression. If the lack of short grass, heavy farming machinery, and the droughts didn’t exist or ever happen, we wouldn’t have had such a difficult time and it would’ve been much easier.

What Was the Dust Bowl?. (2020, Oct 01). Retrieved from https://studymoose.com/what-was-the-dust-bowl-essay 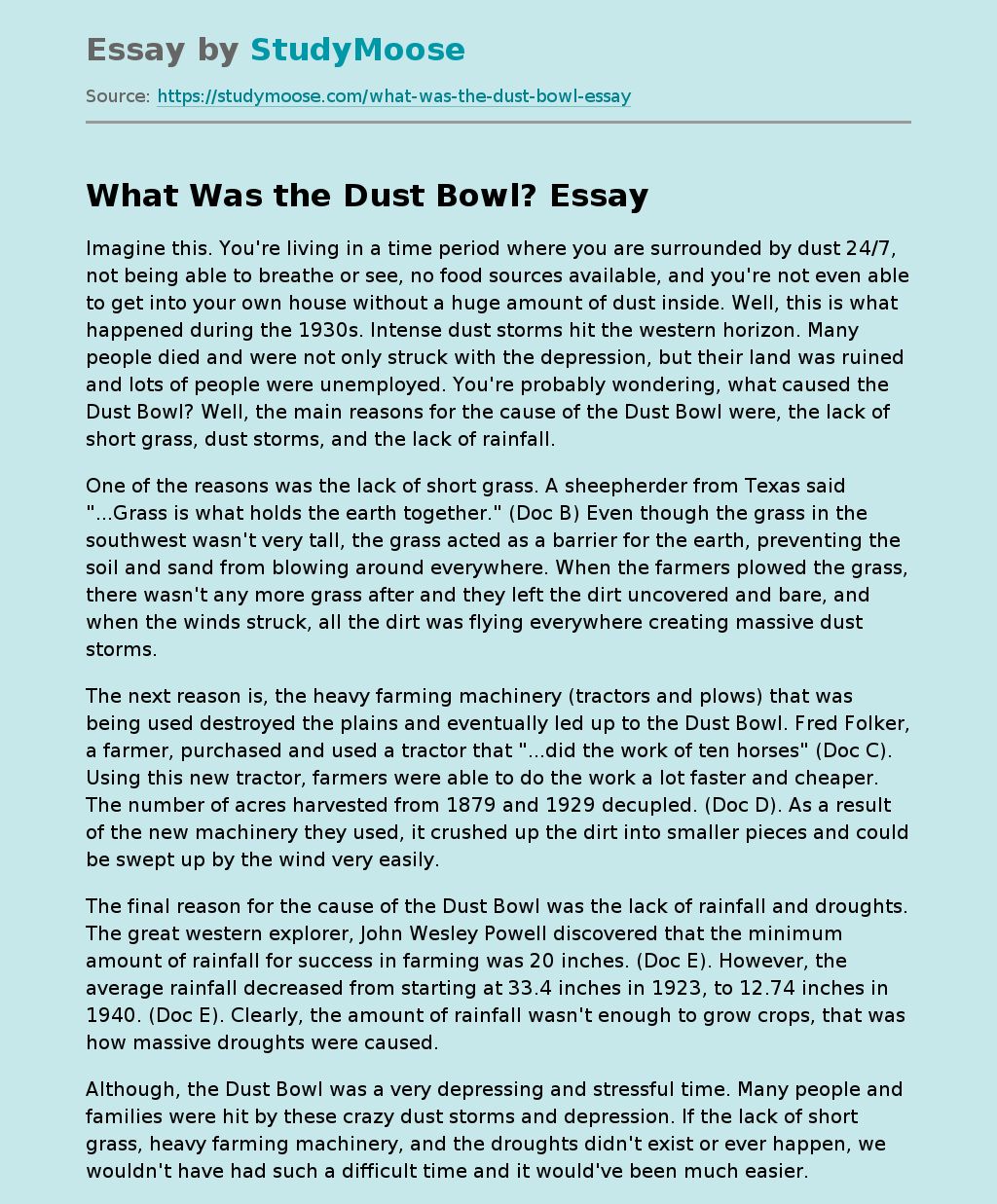