What To Do When Wrongfully Accused Of A Crime?

Anyone who has been wrongfully accused of doing something they know they did not do will understand the immense frustration that comes with it. Fortunately for most people, that boils down to someone saying they took the last donut or let slip a bit of gas. Unfortunately for others, it involves horrible crimes that lead to hard time in prison. Here is one of the cases of people being accused and convicted of terrible things they never actually did. Darryl hunt, Race relations are always a touchy subject, and they were at the heart of the 1984 case of Darryl Hunt, an African American man from Winston-Salem, North Carolina.

Don't use plagiarized sources. Get your custom essay on
“ What To Do When Wrongfully Accused Of A Crime? ”
Get custom paper
NEW! smart matching with writer

At the age of nineteen, Hunt was convicted of the rape and murder of a white woman named Deborah Sykes, despite the fact that there was no physical evidence tying him to the crimes. Even with zero evidence pointing to Hunt, he was sentenced by an all-white jury to life in prison. In 1994, Hunt was actually cleared of the rape when DNA testing proved he had never committed that crime.

Despite the rape being central to the overall crime, he spent an additional nine years in prison until a man named Willard Brown confessed to both acts. So after nineteen years of life in prison, Hunt was finally exonerated in 2004. Since being released from prison, he has worked with “The Innocence Project” and founded the Darryl Hunt Project for Freedom and Justice, as well as the Darryl Hunt Freedom Fighters, in order to help other wrongfully convicted men and women.

Even the criminal justice system goes astray sometimes. How quickly police officers, prosecutors and judges catch those errors can mean the difference between justice and tragedy. Still, a Winston-Salem judge says he saw no reason for a new trial. Despite the efforts of local activists in the black community, Hunt languished in prison for 19 years. Then a one-in-a-million DNA match found Sykes’ real killer. Affairs investigators that, to him, every young black male in Winston-Salem was a suspect. Quoting what he said “Wrongfully accused of rape and murder I couldn’t live with myself. I could not bring myself to say that I committed a crime that I didn’t not commit.

Even being in prison for something I didn’t do, in my heart, I was at peace. The hardest part for me throughout making that decision was convincing the people around me that I could not take this deal. Do I miss all the years that I lost? Yes, and there’s no way I could get those back. So I try not to focus on the loss, I just tried to focus on the future and whatever I have left. I try to cherish every moment I have left. ” He knows deep inside that he did not commit the crime, but you ask yourself why me?. When the only person that may believe you is yourself, and everyone out there outnumbered you media, rumors, etc. Its probably a horrible feeling, espeacially for Mr. Hunt as he experienced something he never had in list of living his life. I suppose everything happens for a reason, and my beliefs are that no human could live with such a thought that they raped or killed someone. Knowing that the person is suffering for his own actions of stupidity, yet I bet he couldnt help it anymore and confessed. Boy 19 years in hard prison for being a dark skinned color person in a all white prison, its tough enough. really it isnt all the mistake of the law even the littlest leads they have well give a judge the state frame of mind that he/she is guilty for whatever the action may be.

Then sometime later someone comes up to confess, after he or she has done some time which can be alot, or just a little. If you’re lucky. Hunt served nearly 19 years in prison after being accused and twice convicted of one of Winston-Salem’s most notorious crimes the 1984 rape and murder of newspaper copy editor Deborah Sykes. The case helped divide the city along racial lines, even though it turned out that the man who committed the crime, Williard Brown, was, like Hunt, black. It had to do with how the case was attacked by the judicial system: the failure by police to pursue other possibilities once Hunt became a suspect, the refusal of prosecutors and judges through the years to consider the mountain of evidence pointing to innocence, including, in 1994, DNA results that showed Hunt was not the man who raped Sykes. “Q. And others who aren’t innocent, as you were? A. Much harder . When you’re convicted, you have this tremendous cloud over you that hangs there and it just continues to hang and people won’t let that go. You can serve your time, you can be remorseful, whatever, but people will not let it go.

They will continue to hold that conviction over you forever, and when you’re in that circumstance, you have a problem because you can’t find a job, nobody will hire you. I’m fortunate I had a community to support me, but so many people don’t. They can’t find housing, they can’t even go stay with their mothers, grandmothers, so it becomes a big problem. ” Today, Hunt, 43, has his family his wife, April, and his three stepchildren. And his work, the Darryl Hunt Project for Freedom and Justice, which operates out of an office building across from Forsyth Superior Court in downtown Winston- Salem, the heart of the very system that put his life on hold for so long. A trial without witnesses when it involves a criminal, a criminal matter, is not a true trial. Ive been wrongfully accused before of things I really didnt do, but I never let my guard down.

The city of Winston-Salem will pay more than $1.6 million to a wrongfully convicted inmate cleared by DNA evidence. The City Council announced the settlement Monday night at its regularly scheduled meeting. Hunt would receive about $90,000 for each year he spent in prison. The state has paid Hunt $358,545 in restitution for being wrongfully jailed. By law, Hunt had three years to file a lawsuit after being exonerated. Last week, Mayor Allen Joines said Hunt had settled with the city rather than file a civil rights lawsuit. The city had initially offered $500,000. Hunt’s attorneys had asked for $2.6 million. Even now, though, there are members of the Winston-Salem police department who remained convinced of his guilt. “There have been some minor incidents” of police intimidation, he says. “Sometimes I’ll be followed close for a quarter mile or so, then they’ll speed off and go around me.” Fortunately, though, time –which may or may not heal all wounds –does have a way of clearing dead wood out of a police department. “The new [black] chief has a better rein on the department,” says Hunt. “And a lot of the officers today are new.”

What To Do When Wrongfully Accused Of A Crime?. (2016, Mar 17). Retrieved from http://studymoose.com/what-to-do-when-wrongfully-accused-of-a-crime-essay 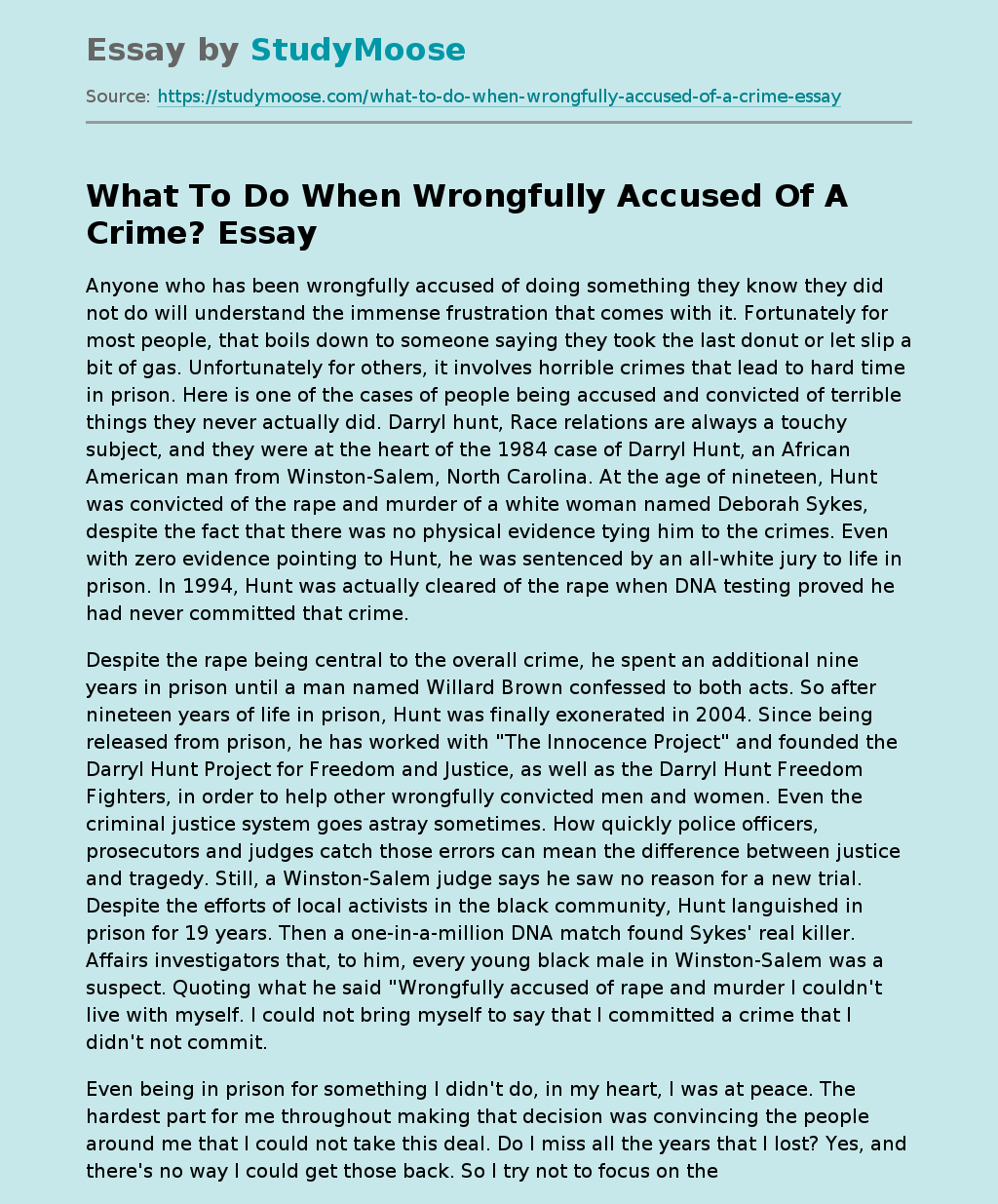