In this essay I will be looking at what motivates Iago’s character from different approaches from sociological perspectives such as the Marxist perspective, the feminist perspective and structuralism, and from a historical or generic standpoint. I will also be looking at the text, including schools of critical theory. Iago is in almost every respect the very direct opposite of Othello. Where Othello is open and straightforward, Iago is not only crooked in all his dealings but also actually reveals in his crookedness.

Don't use plagiarized sources. Get your custom essay on
“ Samuel Taylor Coleridge believes the character of Iago reveals ‘the motive hunting of motiveless malignancy.’ ”
Get custom paper
NEW! smart matching with writer

Where Othello judge’s men by his own high motives and standards, to Iago men are no more than animals upright. Above all, while love is the soul and centre of Othello’s world, without which ‘chaos is come again’ (3. 3. 92), Iago lives, moves and has his being in a world of pure hatred. Iago, unlike Othello, is seen as the villain, he is a master manipulator of people and gets the other characters in the play to do just what he wants.

He has no typical motive for what he does, such as revenge, as he doesn’t really care about the outside world and its revolutions he only cares about the power he uses or can use.

Iago is the most notorious character in Othello as he is able to keep his true thoughts and motives from everyone. Samuel Taylor Coleridge has described Iago’s attitude to life as ‘the motive hunting of motiveless malignancy’. The last two words are often quoted by themselves as if they gave an sufficient account of Iago’s character, but we should note that Iago, far from not having any motives for what he does, has too many.

In the first place, he has been deprived of the lieutenancy, which he desired.

Secondly he is clearly prejudiced against Othello’s race and colour. Finally, there is the tiniest hint in Shakespeare’s play of Iago’s dissatisfied love for Desdemona. But the trouble with these motives is that we are not convinced that they really are the main reasons of Iago’s villainy, at times it seems as if he throws a motive so casually at us that we feel as if he is not interested in convincing us, let alone himself. He tells us of his hate first and offers a motive afterwards, ‘I hate the moor… will do, as if for surety’ (1. 3. 371-375).

At other times he expresses the same motive with such virulence that we feel he is trying to convince himself, to build himself up for action, ‘For that I do suspect the lusty moor… till I am evened with him, wife for wife. ‘ (2. 1. 286-290). Either way, what we are always aware of is the gap between what Iago does and the reasons he offers for what he does; the two seem to spring from different levels of his being. This is the point of Coleridge’s remark about ‘motive hunting’. The tragedy of Othello arises from Iago’s sense of class inferiority.

His hatred of Cassio arises from this, as does his duping of the upper-class fop Roderigo. Iago’s sense of violence comes from this class suppression, a malcontent. Marxist, Karl Marx argued that there are two basic social classes the bourgeoisie (the owning class) and the proletariat (the working class) Iago as the working class man in a strictly hierarchical society with a grudge against, moneyed classed which could be a hint that Iago holds this grudge against Othello, as he is this sort of man.

As early as the first scene of the play Iago shows us strong motives for his actions. In this first scene we see that Othello has made Cassio his new lieutenant. Iago feels he truly deserves his promotion as he says “I know my price, I am worth more no worse a place. “(1. 1. 10) Here Iago is confused why Othello has made such a ‘stupid’ decision. Iago is a man with a huge ego who knows, and sometimes overestimates, his worth. Roderigo understands Iago when Iago said that he is “affined to love the Moor. (1. 1. 36-37) What Iago really means is “I follow him to serve my term upon him. “(1. 1. 39) Iago wants to use Othello for his personal goals so we have put ourselves into Iago’s shoes. He is a man whose self-esteem and professional carrier have just been torn apart. Iago makes his actions of revenge toward Othello almost immediately by informing Brabantio “an old black ram (Othello) is tupping (his) white ewe (Desdemona). “(1. 1. 85-86)

From a historical or generic standpoint, looking at Iago as a character, in specifically Renaissance drama, who possesses elements of the Malcontent and the Machiavellian, being or acting in accordance with the principles of government in which political expediency is placed above morality and the use of craft and deceit to maintain the authority and carry out the policies of a ruler is described, this is characterized by subtle or unscrupulous cunning, deception, expediency, or dishonesty. This aspect of Iago’s character comes from the ideas of the Italian political thinker Niccolo Machiavelli.

He claims that ‘he is concerned not with what men, particularly rulers of states, ought to be or were supposed to be, but with what they actually are, that is, with the rules that actually govern political behaviour’. In England, and particularly in the drama, this ‘political realism’ led to the creation of ‘Machiavellian characters’ whose only real criterion of action was convenience and self interest, but who, to achieve their aims, had to dissemble their real motives and appear to be open, honest and virtuous. Othello can also be seen as a woman’s tragedy, which happens because of male insecurities and male constructions of sexuality.

Women are marginalized, abused and silenced in the play and Desdemona is literally silenced (her voice ‘smothered’ at the end of the play). Feminists argue that a lot of mainstream sociology has been focused on the concerns for men and has failed to deal with the concerns of women, and the unequal position they have traditionally occupied in society. For example, the minor role of Bianca adds as a contrast towards both Desdemona and Emilia. She is the “whore” of society, and her character is dehumanised through being Cassio’s call woman.

She truly loves Cassio but because of her status in society, none of the characters in the play take her seriously. The sub-relationships in the play, both Iago and Emilia, and Cassio and Bianca also give insights into the reality of woman in society. Emilia’s relationship with Iago’s is somewhat loyal, but her desperate attempts towards her husband’s attention show his sexist feelings towards women, she is loud and cynical-especially about men, this is because of years of living with the sexist Iago. Even though she does not hold her husband with high regards, she does not suspect him of plotting out his elaborate schemes.

She dies at her husband’s hand after disclosing the truth about Desdemona’s fidelity. In Act 2 Scene 1, Iago makes provocative comments about women in both the presence of Desdemona and Emilia so it seem that he has no respect for both Desdemona and his wife. From a structuralist approach, the individual is like a puppet, whose strings are pulled by society. Othello hinges on a number of contrasts and binary oppositions from a superficial poetic level to a deeper structural level, such as heaven and hell, black and white. Read Iago’s Motives essay

Iago’s schemes and many if the misunderstandings in the play, arise from the duplicitous nature of language and its ability to be misunderstood. During Iago’s speech, in act 2 scene 1, he tries to assure himself of the true love Cassio holds for Desdemona when he says “that Cassio loves her, I do welll believe’t” (2. 1. 277) In this speech we are able to see Iago act more as a human than a monster. He tries to make himself feel better by convincing himself that his lies are actually true. If he was a ‘devil’ who does evil for his own sake, than he wouldn’t care if his lies were true or not.

Iago speaks of how Othello would prove to be a good husband to Desdemona; he also admits that he loves Desdemona. “Now I do love her,”(2. 1. 282) he admits, “Not out of absolute… but led to diet revenge. ” (2. 1. 283-285) This claim of love for Desdemona has a nonsexual implication: Desdemona is an object, which enables Iago to seek revenge on Othello. Again, Iago does “suspect the lusty Moor,”(2. 1. 286) had an affair with his wife Emilia.

His motive is to seek revenge and get even with Othello as he says “Till I am evened with him wife for wife. ” (2. 1. 90) Iago’s motive is to make Othello overcome by jealousy, “At least into a jealousy so strong,”(2. 1. 292) that he will not be able to see or think straight. Iago says that jealousy is an affective judgement, which completely corrupts their lives because it causes Iago to show his true self, which in turn triggers Othello to undergo an absolute conversion that destroys the lives of their friends. Iago, who is “most honest” in the eyes of his companions, is, in fact, truly the opposite. In conclusion it is unclear what motivates Iago to wreck Othello’s love for Desdemona.

Whether from jealousy, cruelty, boredom, or the desire to control other people, Iago turns Othello against Desdemona by suggesting that Desdemona has been unfaithful. Although Desdemona is innocent of any crime, and Iago has no evidence to bring against her, he manages to convince Othello that he has been cheated on. Iago plays on this difference in the first scene, using racist language to suggest that Othello and Desdemona’s love is like two animals having sex, because of their different races. Iago is an egotistical man whose self-esteem is hurt. 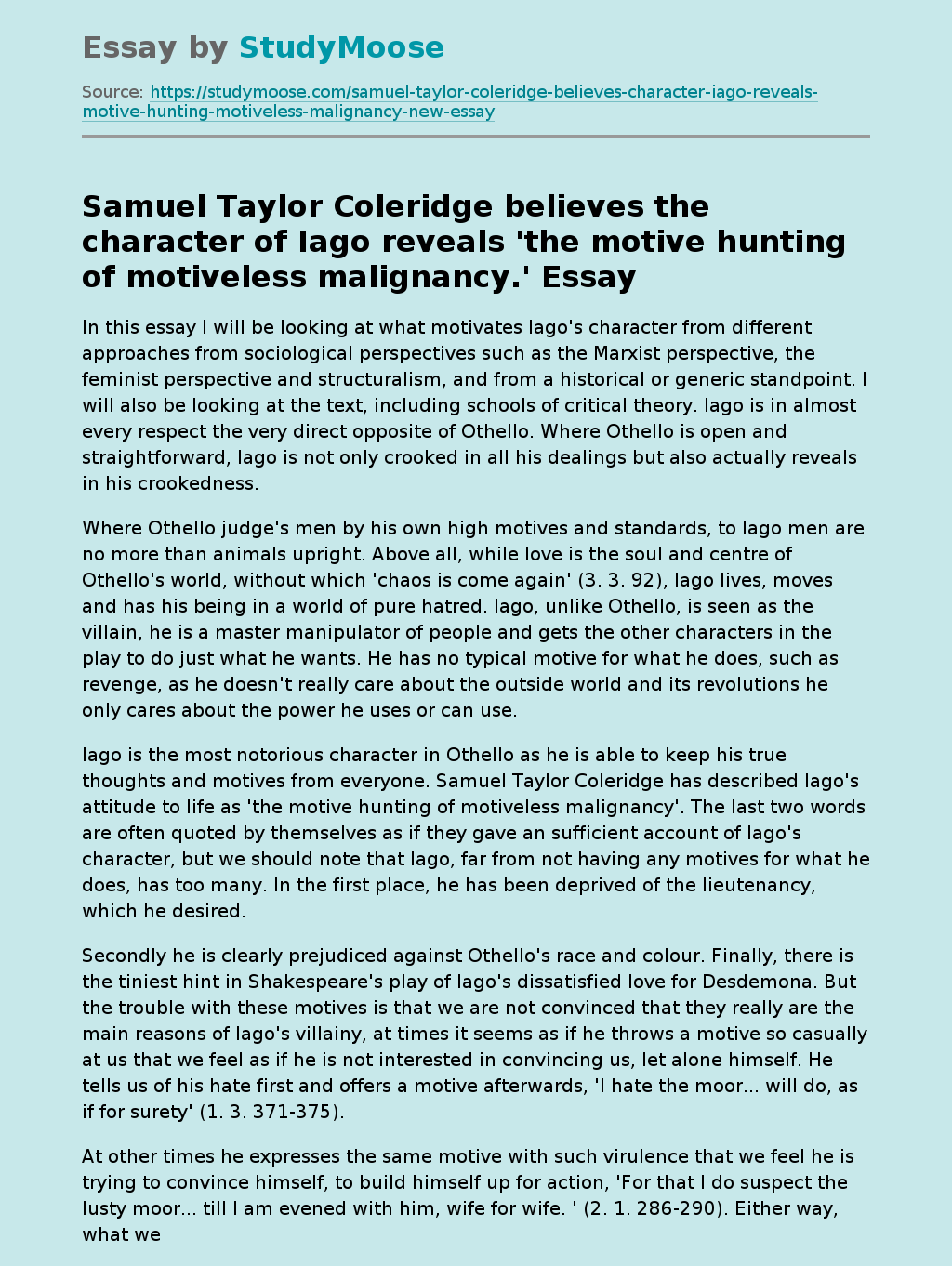