Explain communication as a process and as a transaction

Communication is the way in which we express feelings, ideas and share information. This activity begins from birth. A new born baby communicates with his mother ? when baby cries this sends a message to his mother, either that baby is hungry or sleepy. Communication develops as we get older. A child at age seven wouldn’t cry to show she is hungry but rather cry when she falls off her bike while playing to express pain.

To express hunger, she may simply state to her mother that she is hungry. This method of communication is called speaking. Other types include reading, writing and listening.

Hybels and Weaver (2007) define communication as “any process in which people share information, ideas and feelings”. It involves not only the spoken and written word but also the body language, personal mannerisms and style — anything that adds meaning to the message.

Since communication is a process this implies that it is continuous.

It is a continuous action as long as the participants prolong the exchange. Communication consists of various elements which include sender-receivers, messages, feedback, channels, noise and setting. These elements wield the outcome of communication, stated differently; these elements influence the results of the communication process.

The process of communication begins with conceiving a message. The sender is one who wants to transfer a message. If one has something to share — feelings, ideas or information — one forms whatsoever he/she wants to communicate.

The second step is encoding the message.

This involves structuring the message in such a way that the receiver understands. Language, tones and gestures are part of encoding the message. This severity of those factors would depend on the situation. For example a manager conceives that he wants to address Kerry a subordinate in his office. The urgency of her presence in his office would be translated by him in the way he encodes the message.

Once an appropriate channel is selected and used the receiver now receives the message. Here he/she must decode the message. Meaning is attached to the various symbols and the channel used by the sender and now the receiver must interpret the message. This interpretation involves gaining an understanding from the message and is influenced by the receiver’s personal experiences, relationship with the sender, knowledge, perceptions and culture.

Feedback is the final step in the communication process. Feedback is the response the receiver sends to the sender. In feedback the receiver conceives, encodes and selects the channel just like the original sender did. The original sender then becomes the receiver since he decodes, interprets and responds (feedback) to the response (feedback) the original receiver sent. Hence communication is a process, it is continuous. It informs the sender on the effectiveness of the message and allows the sender to clarify misinterpreted meanings. “Feedback plays an important role by indicating significant communication barriers: differences in background, different interpretations of words, and differing emotional reactions” (Bovee & Thill, 1992).

Since communication is an act of sending and receiving it can also be described as a transaction. A transaction in general relates to some form of exchange thus giving and receiving. Transactional communication consists of three principles, the first being that participation is continuous and simultaneous. One could both be a receiver and a sender for instance Rob is crying over the death of his grandfather and his friend Sean is consoling by extending a hug.

Sean receives the message of Rob’s grief and responds by hugging him thus Sean is both a receiver and sender in this situation. The second principle is that transactional communication has a past, present and future. Past experiences influence what your expectations of people and situations. Knowing that someone is a CEO you would expect him/her to be intelligent, smooth and articulate. In communication roles are also played. People do not behave similarly with everyone. For example a teacher would not play the role of lover to her students but that of an informative teacher, and lover to her husband.

Communication is not as easy as it seems. Yes, we inherit it from birth but effective communication is a skill that is mastered like any other skill through practice. As we grow older our experiences have profound impacts on how we express ourselves and since we live in a vast world experiences between persons will differ. This difference causes communication barriers such as language, noise, assumption and culture to arise.

Language plays an important role in communication particularly through oral and written channels not non- verbal symbols as they typically do not involve the use of words. The wider the vocabulary of senders and receivers the more likely the message will be clearly encoded and decoded. Articulate persons are generally better at explaining their feelings and ideas since they have more choices to choose from i.e. words. The choice of words is vital since the sender wants the message to be understood. For example a lecturer must adjust his speech to fit the academic level of an audience filled with mostly juniors.

People also tend to attach meanings to certain words so speakers should be aware of any negative meanings attached to certain words in certain cultures. For example the word “nigger” is used to refer to people of the black ethnicity, if this word is used in America or anywhere else for that matter, black people consider it as very offensive. However if one uses that words amongst his own ethnic group (black says to black) it is tolerated.

Speakers must also be aware of specialist jargon, dialects and slang when communicating with certain people. A doctor would simplify an illness to his patient using general words instead of the complicated medical terms because only one who studies medicine would understand such terms. He would however speak to his assistance using the jargon since she would have studied medicine and have experience in the field hence he adjusts to her educational background and knowledge. Altering one’s language according to these factors gives the receiver a better chance at accurately decoding the message; effective communication is achieved.

Noise, another communication barrier is any event that obstructs the clarity of the message. Noise can be further divided into three categories. Internal noise refer to obstructions in peoples mind i.e. what they or thinking or their state of mind. Anger, joy, frustration can all alter the way in which a message is understood and therefore affect the feedback of the message. External noise is occurrences in the environment that block or alter the meaning or comprehension of the message such as, uncomfortable weather and chaotic surroundings. Semantic noise is the meaning one attaches to word hence your emotional reaction to the word. This meaning varies throughout countries and the various cultures. It is important that receivers clear all contradicting mental thoughts in order to interpret more accurately the message sent.

Assumption and judgment is another communication barrier. People often hold opinions to various situations. Their views are somewhat unreasonable since they draw conclusions from one occurrence. A typical example of this is stereotyping which are preconceived notions or ideas about people or situations. Take the Guyanese issue in Barbados. Barbadians hold the view that all Guyanese immigrate in their land to steal their jobs.

However, this may not be entirely true, maybe they came to experience the advantages of a much more stabilized country, better living conditions, better education, all of which do not display an intent to “steal” jobs from Barbadians. This conception has caused tension between the two nationalities. Misconceptions generally cause tension since people don’t wait to ascertain the full picture; instead they draw conclusions from one occurrence and tag it on all other similar situations.

Culture is the set of norms, traditions and customs practiced by a society. Culture varies from country to country since different experiences and events have taken place between the countries. Cultural differences therefore are another form of communication barriers. Difference between persons can cause a message to be interpreted incorrectly. People interpret messages based on their experience and knowledge. With the culture barrier the two participants’ culture are different hence the receiver will interpret the message differently from what the sender intended to encode. In France it is a norm to be late for a meeting or any engagement however in the American culture this is considered as rude lack of interest and disorganization. Another illustration is where in American cultures maintaining eye contact while speaking displays confidence and surety whilst in Japan this is seen as impolite.

Based on the barriers defined above the chances of the barriers affecting communication can be minimized by the sender and receiver being aware of their differences i.e. in culture and language. One should use general words, words that fit the academic or social level of the receiver. In terms of the assumption barrier persons should understand that grouping situations into one heap because of one or few occurrences is not advisable. Persons should try to communicate objectively and leave out thoughts and feelings that categorize the other participant (receiver) and rather take the person in their context and try to communicate on a level that would give them a fair chance.

What is Strategic Flexibility?

A business operates to satisfy customers and to outmaneuver competitors in order to achieve a competitive advantage. Strategic flexibility is a characteristic most organizations should try to possess since it allows the business to examine the internal and external environment so appropriate adjustments to resource use can be made and decisions can be implemented to adapt to the ever changing environment. Strategic flexibility provides a range of alternatives when making strategic decisions and it provides a source to learn from mistakes so it is a favorable characteristic for any organization.

Strategic flexibility emphasizes the idea of being able to adapt to the environment. Slocum and Hellriegel (2007) describes perception as the process by which people select, organize, interpret and respond to information from the world around them.

Strategic flexibility in relation to self perception and self concept depends on what perceptions managers have of the company and the self- concept of themselves (if they are capable in driving the business into success). For example a newly established firm with low profits. When managers decide to carry out a SWOT analysis their perception and self concept will directly affect the business. A weakness may be discovered however since their perception of the business is negative no effort is made to override this weakness and mould it into a strength.

Therefore in strategic flexibility managers must possess positive self concepts and perceptions in order to adapt to the environment and also spot strengths that may be hidden in the form of a weakness and opportunities in the form of threats. Perception and self-concept therefore have a bearing on the success of the business and once these factors are approached positively the chance of success is greater.

The better one understands verbal communication the higher the chance that the message will be communicated accurately. Also in strategic flexibility how managers express their messages will influence how they perceive strengths, weaknesses, opportunities and threats. Therefore in strategic flexibility great verbal communication skills needed. It provides clearer and more accurate anticipation, assessment, evaluation, selection and application of major business ventures.

What is Communication?. (2016, Jul 27). Retrieved from http://studymoose.com/what-is-communication-essay 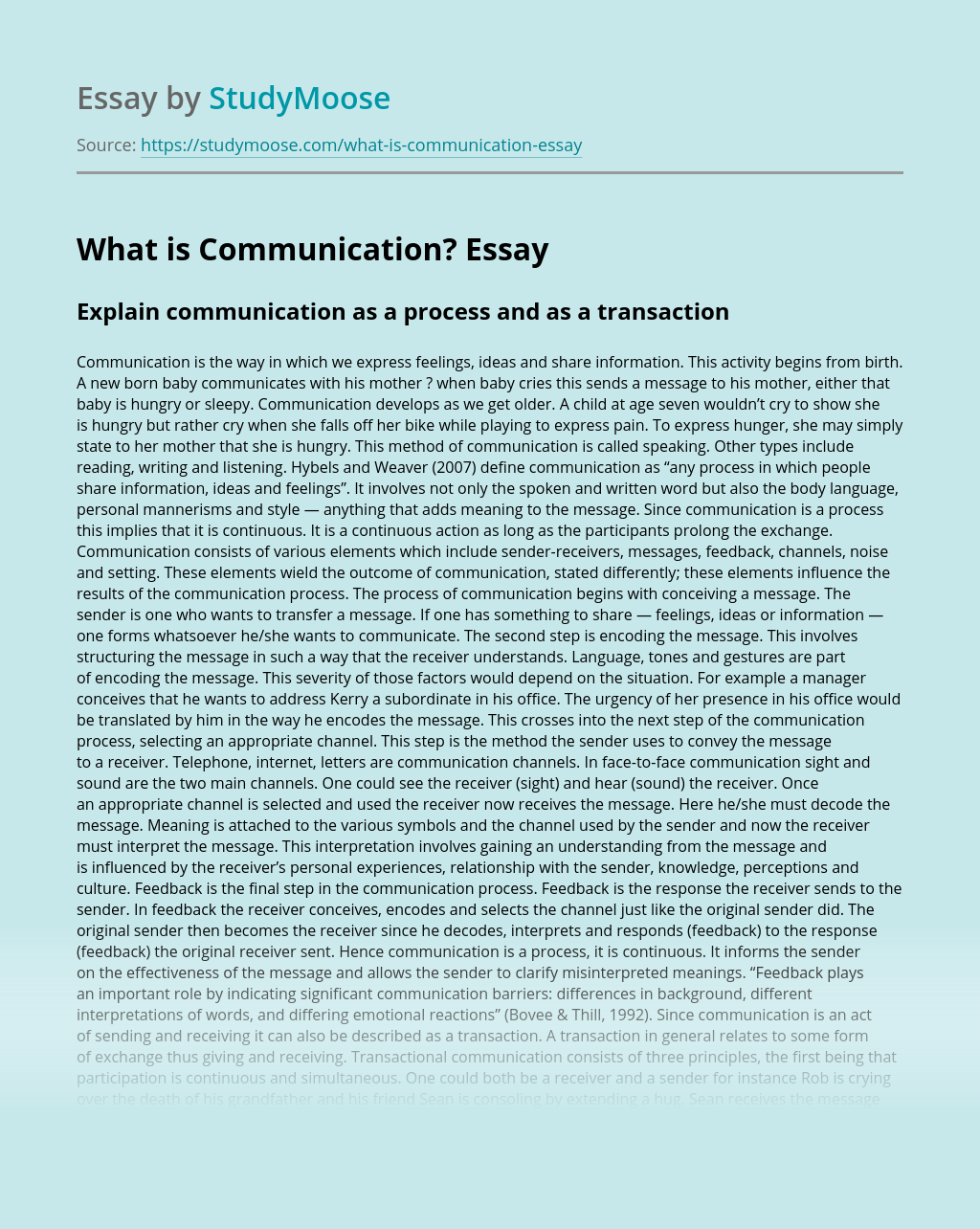 Don’t waste time
Get a verified expert to help you with What is Communication?
Hire verified expert
$35.80 for a 2-page paper
Stay Safe, Stay Original