The world was a different place when I turned 18 and had to start making decisions about my own finances. It was 2005 and the economy was still on fire. I was preparing to start college majoring in Finance because it seemed like that industry could do no wrong.

My parents believed, accurately, that it would be good to have a credit card in my name so that I could start building up a credit history. Credit scores factor in the age and variety of your credit accounts, so it is beneficial to have different types of credit (car loans, student loans, credit cards, etc) and to have accounts open for a long time.

Don't use plagiarized sources. Get your custom essay on
“ What I Wish I Knew About Personal Finance When I Was 18  ”
Get custom paper
NEW! smart matching with writer

I was just about to start taking out student loans and they felt that getting a credit card at the same time would be a big help for my future credit score once I was graduated and out in the world.

Someone who is currently 18 might not believe that this was possible, but I went to my local bank branch and was given a credit card with a $6,000 limit and a 7.

49% interest rate. Had I a better sense of historical perspective at the time, it might have occurred to me how ridiculous it was that a bank was willing to extend that kind of credit to an 18-year-old.

Fast forward a few years and things had drastically changed. I was taking my senior-level Macroeconomics class in the fall of 2008, which was probably the most exciting time for macro in several decades.

Watching the financial services industry nearly collapse and require multiple rounds of nearly-unprecedented government support was fascinating and terrifying for someone who was planning to build a career in that field.

On a smaller scale, the impact of those changes was even noticeable around campus. There were no longer tables set up outside every student event where banks had sign-ups for new credit cards. Sign up for a credit card and they would even give you a free hat or t-shirt. Nobody thought it was odd at all that they were so willing to open credit accounts for teenagers and young adults with no full-time working history and (usually) no or limited income. If you included spending on school, nearly all of us were earning large negative amounts of money every year.

As soon as securitization markets dried up, so did all those offers for student cards. I still enjoyed my card with its huge limit and tiny interest rate, but I was also behaving myself (financially speaking, at least) and not carrying a balance. One thing my parents taught me was to use the card regularly but keep it paid off. This way you can accumulate rewards points and have better buyer protection (credit card protection is much stronger than debit card protection in the event of fraudulent charges) but get those benefits essentially for free since you’re not paying interest.

My problem began when I needed to replace my laptop during my senior year. I looked around at several models and found one that was at the top of my budget but seemed to meet all my needs. I was interviewing for several post-college jobs at the time and felt good about my chances (who better to feel confident than someone not even done with school yet), so it seemed reasonable to buy the nice one even though it would mean having a credit card balance for a bit.

It was at this point (shameful to admit for someone about to graduate with a degree in finance) that I found out that credit cards don’t force you to make big payments towards eliminating your balance each month. In fact, they only require very small amounts (relatively speaking) that include interest plus a tiny amount towards your principal. I didn’t see the harm in making only the small payments and waiting until I started working to pay off the balance. I wound up carrying a balance for the next several years, letting it slowly accumulate higher and higher because I was not focused on my budget and the small increases each month didn’t seem like much at the time.

This all came to a head after a few years when I made the biggest single mistake in my financial life, which was when I missed a payment due date on my card. When this happens, the credit card company immediately raises your rate from the normal one on the account to what’s known as the “Default Rate”. In my case, my interest rate immediately jumped from 7.49% to 23.49%. The amount I was paying in interest skyrocketed and the minimum payments suddenly took up a decent chunk of my paycheck. It took several years of very strict budgeting to eventually pay off that balance after the tremendous rate increase. The combination of spending beyond my means in my early 20s plus not setting up autopayments (seriously, it’s so easy) cost me many thousands of dollars that could have gone into savings (or something more fun like a vacation).

I certainly wish I could have used my knowledge of amortization tables to see how much money it cost me in the future to spend too much at the time, but learning something the hard way is often a good way to make sure you don’t make the same mistake twice

What I Wish I Knew About Personal Finance When I Was 18 . (2021, Dec 09). Retrieved from https://studymoose.com/what-i-wish-i-knew-about-personal-finance-when-i-was-18-essay 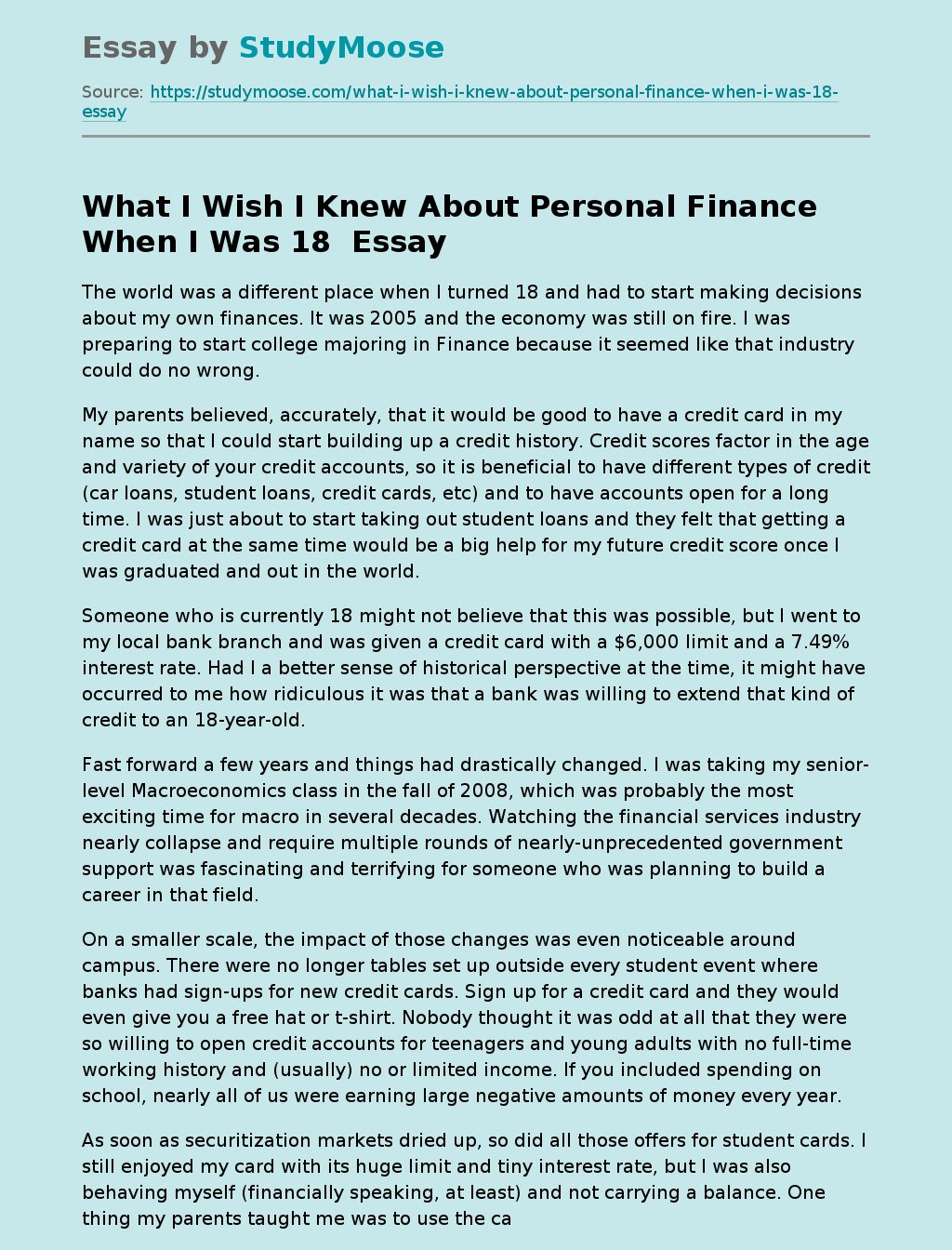