﻿What are the qualities of an efficient employee?

In recent times, companies have to very competitive. Many companies want to improve their productivity. When it comes to productivity, employee and management effectiveness is of the utmost importance so companies can make more profit and compete better against other companies. Therefore, this essay will explain the qualities of an effective employee and outline the way bosses can increase the employees’ effectiveness.

There are several factors that can make employees more efficient. The first factor is welcoming criticism.

Don't use plagiarized sources.
Get Your Custom Essay on ﻿What are the qualities of an efficient employee? Just from $13,9/Page

This is something that a lot of people hate. Conversely, good workers like it more than hate it. For instance, excellent employees will think criticism from others can lead to solving problems (Simmons 2008-2010). In addition, Simmons (2008-2010) reports that good workers actively pursue other people’s opinion rather than avoiding them. The author goes on to say that good workers will listen to criticism from everyone even when they know the other worker dislikes and disagrees with them.

The second factor is increasing self discipline. It can help workers to work more consistently and seriously. An example to illustrate this point is that effective workers should have high spirits anytime, even when they are not feeling stimulated and energetic (Simmons 2008-2010).

In addition, they must work diligently even though they are in a bad mood (Simmons 2008-2010). Furthermore, Simmons (2008-2010) explains that they need to give the boss one hundred percent support all the time. The final factor is in tackling opportunities. Successful employees will not miss any opportunities because it is a good chance to show their ability. According to Simmons (2008-2010), excellent employees look at the weak points in their organization as an opportunity to demonstrate their ability and leadership with better results. In addition, opportunities can be anywhere in the workplace, so they need to keep thinking intelligently and creatively (Simmons 2008-2010). In short, a lot of things can make workers more effective, such as welcoming criticism, increasing self discipline and tackling opportunities. Therefore, employees choose to study certain subjects to improve their qualities and make them more effective.

On the other hand, bosses can improve employees’ efficiency in certain ways. Firstly, bosses need to understand staff needs. For example, bosses need to have more connection with workers to make workers feel more valuable and feel that the company is like a good family (Smith 2006-2010). Moreover, Smith (2006-2010) reports that bosses can assign different type of tasks and make one day a week as casual dress day for workers because they need variety. Bosses can commend workers that have good qualities and award good workers because they need to feel appreciated in their job (Smith 2006-2010). Secondly, bosses need to know it is important to have a balanced lifestyle for workers. According to Smith (2006-2010), workers can overwork and neglect to look after their health.

Thus, bosses should care about work timetables to make sure workers have adequate free time for leisure to relieve their stress (Smith 2006-2010). Furthermore, Smith (2006-2010) explains that bosses can encourage staff to seek their hobbies. Finally, bosses can be positive and enthusiastic around workers. An example to demonstrate this point is that bosses instill hope around workers because it is a positive guide for workers in the future (Smith 2006-2010). When sales are down, bosses can instill enthusiasm to raise sales so employees become more productive and effective (Smith 2006-2010). In addition, hope can push workers to pursue their goals, such as a higher position. In brief, managers need to know about staff needs, understand significance in balanced lifestyle and instill hope to improve employee’ efficiency.

In conclusion, better workmanship can be affected by the qualities of employees and bosses using different ways to improve staff efficiency. These include listening to all opinions, improving self discipline and tackling all opportunities. On the management side the result can include recognizing workers needs, understanding the importance of a balance between work time and free time for staff and giving hope to workers. The business world is a highly competitive world. If workers are more effective, it can improve company competitiveness and survival strength.

﻿What are the qualities of an efficient employee?. (2016, Mar 18). Retrieved from https://studymoose.com/what-are-the-qualities-of-an-efficient-employee-essay 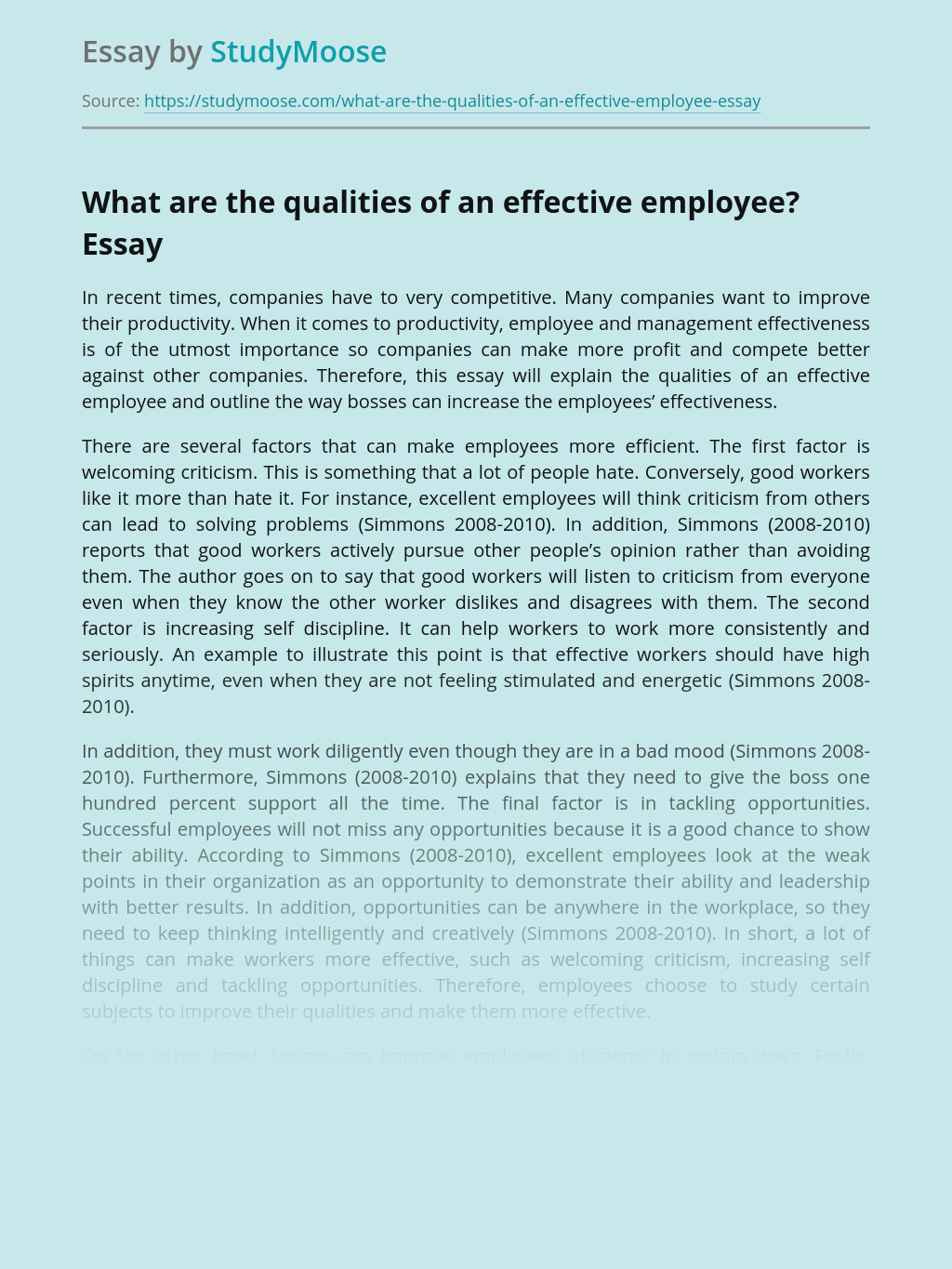 Qualities of My Ideal Job

Rate this post The ideal job is a career path where you do work which you love and which completely satisfies you. It is the profession that one is good at, interested in, and most importantly, happy doing, and getting rewarded with a source of income for it. To understand what work would be ideal...

Rate this post 1. Table of Contents: Preface i. Ethics and Fair Treatment at Work ii. What Determines Ethical Behavior at Work? iii. How Managers Use Personnel Methods To Promote Ethics and Fair Treatment? iv. Managing Employee Discipline and Privacy v. Managing Dismissals 2. Why I Selected This Book/Article: For the Course HRMN250 Human Resource...

Get Essay
Importance of On the Job Training

Rate this post If you’ve left university and don’t yet have a job, here are tips on creating an action plan for finding work. It’s widely acknowledged that it’s harder than it used to be to land your first graduate job, and more people now find they are graduating without a job to go to...

Rate this post 1 Introduction SG Cowen, located in the United States, is an industrial company established in July 1988. Orientated in the financial sector, SG Cowen constituted a hiring approach containing diverse steps with methods, approaches and decision criteria. To asses the job applicants and to make a decision about the most eligible candidates,...

Rate this post In this paper I will look at the core attributes of being an excellent good example and efficient leader and reflect upon how these compare to my attributes and characteristics in the function I perform in my work as a manager. I will likewise go over how I can establish as a...

Does School Prepare You for Work

Rate this post Nowadays, it’s harder for fresh graduate to get employed because of the competition among one another. Many people have degree certificates now, as it is becoming more common and institutions are looking more for experiences over certificates. But then the purpose for going to colleges or universities are not mainly for the...

Rate this post This assignment is prepared under the subject Human Resource Management which contrasts about the strategic and cooperate concepts of achieving competent workforce and goals of an organization. This report mainly addresses about the role of Human Resource Department of Public Service Media in Recruiting and selecting the potential candidates. Moreover, to assure...