Was The Reconstruction Success Or Failure

Reconstruction was a time when the government thought that all people needed human right even African Americans. Until this point African American had no right. Some say it failed because blacks were not equal to whites after reconstruction at the end of the period, black were still much poorer than whites and they were not able to vote and were subject to segregation. I feel the reconstruction was a time of success and failure for different economic, political and social reason.

Don't use plagiarized sources. Get your custom essay on
“ Was The Reconstruction Success Or Failure ”
Get custom paper
NEW! smart matching with writer

From what I’ve read recently, I can’t say it was a complete failure or success because the Reconstruction was a not an economic boom or failure because of differing policies.

Most of the opinions on the side of Reconstruction were after it “ended” by historical record. In 1882, after the Reconstruction was ended, Fredrick Douglas, a former slave wrote: “The Negro after his emancipation was precisely in the states of destitution. Now, poverty had no change against wealth the landless against the landowner, the uneducated against the intelligent, the freedman was powerless.

” From my research, I have found this position to be completely true. This was one of the worst failures of Reconstruction. The black code, alluded to in Douglass’s quote “the negro was in a state of destitution” is because the Northerners were scrambling over how to do Reconstruction so the black stayed poor. Even with the Freedmen’s Bureau and other programs to help the South, “the southern states passed laws that all but returned the Negro to slavery.

” Also less than 10 million of economic aid went to South.

Was The Reconstruction Success Or Failure. (2016, Mar 19). Retrieved from http://studymoose.com/was-the-reconstruction-success-or-failure-essay 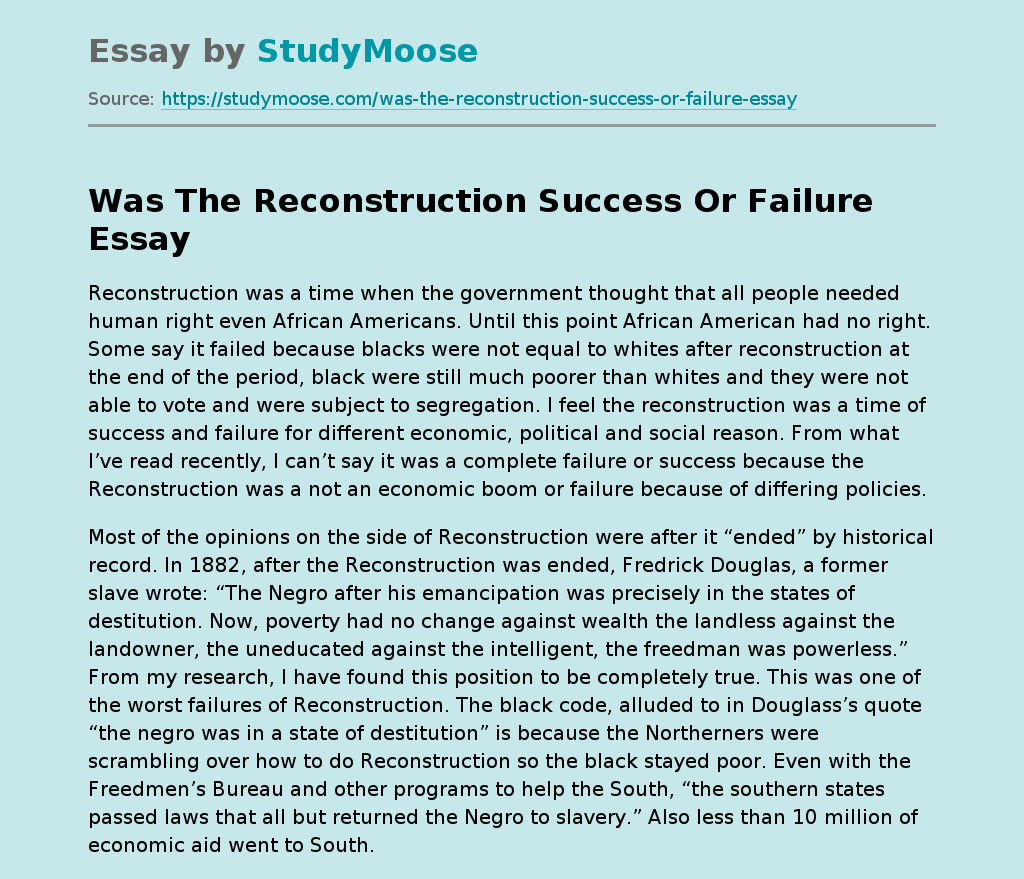