Magma bubbles and smolders with calefaction below the coarse crust of our planet. It yearns for liberation from the constricting rocks and crevices in which it adheres. It roars with anticipation as it looks to advance into a forbidden dwelling. CRACK! It breaks the barrier of segregated ground, FREEDOM! In A Raisin in the Sun, by Lorraine Hansberry, the main dynamic protagonist, Walter Lee Younger, also longed for an escape. He was forced to face an enemy that felt even more extreme than Earth’s inner core.

Don't use plagiarized sources. Get your custom essay on
“ Walter Lee Younger ”
Get custom paper
NEW! smart matching with writer

Racial discrimination consumed him like a vacuum. Skepticism besieged from his family, destroyed the remnants of his former self. Although Walter encountered these hardships, continuously, he discovered himself to be his most prominent enemy. Despite his role as a major protagonist, Walter’s negative possession of gullibility as well as compulsiveness unceasingly enabled him to make poor decisions. Walter’s impetuous perception on the world finally comes to a halt, when he selfishly gave his sister, Beneatha’s medical school money away as well as his own.

Although tragic and detrimental, the loss brings the Younger family closer together and in turn helps Walter find pride in himself. Walter Lee Younger is the quintessence of a dissatisfied person.

Although unsuccessful, he is a dreamer and knows he is capable of greatness. When in the presence of money, determination and hope floods his mind and he blabs it to anyone who will listen. “Just tell me where you want to go to school and you’ll go.

Just tell me, what it is you want to be—and you’ll be it…Whatever you want to be—Yessir! You just name it, son … and I hand you the world!” (Hansberry 108). Walter wants Travis to be proud of him. Walter’s actions impact the plot and accentuate the feeling of racial prejudice that absorbs the Youngers. Walter looks his biggest enemy, racism in the eye every time he walks out of the squalid apartment that he calls home. Lorraine Hansberry cleverly uses Walter as a symbol of a victim of social injustice and discrimination that African Americans were constantly faced with in the 1950’s. Walter has dreams. He wants to believe that he can be just as successful as any white man. Walter’s disappointment in himself, and in society is prevalent throughout the play. The use of Walter’s sulking attitude ameliorates the theme by showing how racism in the United States prevented high success among African Americans. Walter cannot help but to feel sorry for himself, by the lack of entrustment his mother, wife and sister instill in him about potential investments.

Ultimately, Walter’s conflict with himself is that he doesn’t want to settle with a life where he is anything less than completely successful. Walter and his family frequently encountered racial discrimination through the hard times, living in Chicago in the nineteen fifties. When Mama decided to buy the house in Clyborne Park, the family had to come to terms that they would be very unwanted. In buying the house, it acted as a symbol of the true hardships that African Americans were faced with as they struggled to assimilate in a predominately white society. Karl Lindner shows the opinions many people had towards African Americans as he attempted to buy the house back from the Youngers. “What do you think you are going to gain by moving into a neighborhood where you just aren’t wanted ” (Hansberry 80). It is evident that the Youngers would face discrimination as they looked to a future without racial segregation.

The Youngers purchase of a house in Clyborne Park, where black people are not welcomed, displayed the Youngers desperation and desideratum to advance their situation of living out of the confined and vexatious apartment in which they previously resided. Walter’s family began to lose faith and confidence in him as the insurance money disappeared. Throughout A Raisin in the Sun, Walter learned why it is so necessary to maintain adequate relationships with family, as well as in business. Walter realized this at the end of the play, and it helped him in showing his son why love and pride in ones self supersedes materialistic success. As humans, we falter in out ability to make sound decisions, yet realize that it is more crucial that we don’t fail our support system of family. 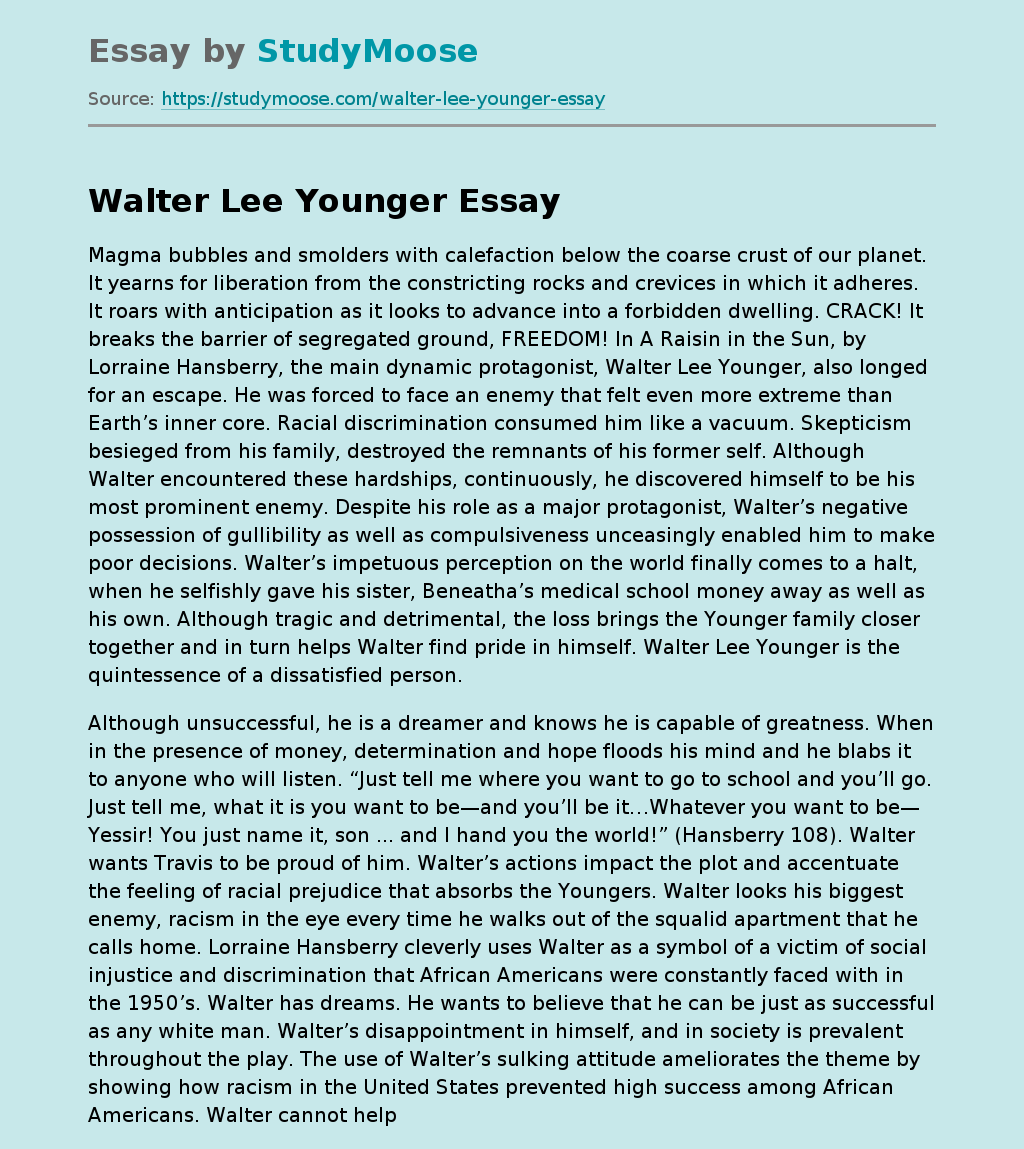