The normal eating schedule in today’s world is three meals per day: breakfast, lunch, and dinner. Eating only three meals a day sometimes just doesn’t cut it, especially for children whose bodies and brains are continuously growing. A snack in between meals is a good way to regain energy and to stay focused. School’s today have vending machines that are filled with snacks and drinks, which is a good thing for students because they provide a quick outlet to help settle growling stomachs.

Don't use plagiarized sources. Get your custom essay on
“ Vending Machines in Schools: Pros and Cons ”
Get custom paper
NEW! smart matching with writer

The only downside to having a snack in between meals is what they are snacking on. Most vending machines today consist mainly of junk foods and sodas, which is not the best thing for children. A snack out of a vending machine is a good thing, as long as it is the right snack.

Today, child obesity is increasingly growing throughout our country. Unhealthy food is becoming easily accessible for children, resulting in overweightness at a young age.

As a parent, it would be hard to monitor what their child is eating while the child is away from their parents at school for most of the day. The parent could choose not to supply the child with money, but that child could find a way to get a candy bar if they really wanted it. Packing a healthy lunch is a great idea to make sure the child gets the proper nutrition they need, but who says that child is actually eating their packed lunch and not just throwing it away or trading it for something that is more appealing to their taste buds.

With unhealthy foods in machines at school, it makes it very difficult for the parents to make sure their child is sticking to a healthful diet.

Eating junk food can prohibit the intake of critical nutrition for young kids. The years from newborn to adults is a very important time, our bodies are growing and need the proper nutrients. If a child is overeating on junk foods and not sticking to a somewhat healthy diet, then they run the risk of becoming overweight and potentially being diagnosed with diabetes. The Centers for Disease Control and Prevention (CDC) reports that in 2010, 215,000 people under the age of 20 had the diabetes. Unhealthy eating habits are not the only cause for diabetes, but it is one of the leading causes (Cari Oleskewicz, Global Post). With so much junk food and soda in schools today, the White House even took a stand to fix the problem. In February 2014, the First Lady Michelle Obama proposed a new law. The law limits the marketing of foods and beverages with low nutritional value in schools.

This will prohibit companies, such as Pepsi, to advertise their logo on scoreboards or anywhere in the school’s facilities (The Boston Globe). The First Lady even started a campaign to help end childhood obesity called Let’s Move. Michelle Obama’s Let’s Move also has a website, offering tips and information on how to stay healthy. Michelle played a big part in the passing of the Healthy, Hunger-Free Kids Act of 2010, which has helped make healthier options available at schools including more whole grains, fruits, and vegetables. I think this is a great step. I hope to find that schools have devoted more attention to nutrition in the classroom as well. I am also curious of the link between schools promoting healthy foods and students making healthy food choices beyond school. Do students resist? Are parents on board?

President Obama is also trying to fix the problem of unhealthy foods in vending machines. As part of obamacare, vending machines are now required to display the calorie information. “The new rules apply to more than 10,000 vending machines companies nationwide that operate 20 or more machines” (CNN’s Christine Romans). Romans also says that “The FDA estimates it’s going cost the industry about $25.8 million, maybe $24 million every year after that.” By doing this, the information displayed may help the consumer make a healthier choice. This is costing companies extra money they probably do not want to spend, but may result in a healthier youth or even adults. As schools are still transitioning into providing healthier choices, I decided to explore what these changes will mean for the child. A 2005 study surveyed students from Los Angeles high schools that already had a nutritional policy of their own. The Los Angeles Unified School District (LAUSD) had implemented The Healthy Beverage Resolution, which banned soda, and the Obesity Prevention Motion, which banned junk food, in 2004.

Together, these policies prohibited the sales of all foods that the school district considered to be junk foods, and soft drinks to students during school hours (Vecchiarelli, p. 526-527). Of the 399 LAUSD students surveyed, 55.5% of the students said that the beverage policy affected what drinks they consumed at school, while 16.2% of the students said the policy affected their choice of beverage at home. 52.6% of the students said the junk food policy affected the snacks they consumed at school and 20.2% percent stated that the policy affected what they chose to snack on at home. Unfortunately, about one-third of those who claimed that the policies affected what they consumed at home stated that they ate more of the restricted items (Vecchiarelli, p. 528, 530). The results of the study show some positive effects on students’ attitudes towards eating more nutritious, but it also shows negative effects. The fact that many students in the LAUSD survey rebelled against the soda and junk food policies by eating unhealthier outside of school not only shows a lack of embrace by some students but it also shows a lack of support from parents. I believe this lack of support comes from a lack of knowledge.

Schools may be unable to educate parents, but they can educate their students. Setting a policy in place and not educating the students about the importance of it will only cause them to resist. A more coordinated approach involving nutrition education would be most effective. According to the National Center for Chronic Disease Prevention and Health Promotion, childhood obesity tripled from 1980 to 2010. In 1980, 5% of kids between the ages of 12 and 19 were considered obese. By 2008 that number increased to 18.1%. With obesity come many health risks, such as cardiovascular disease, high blood pressure, cancer, and diabetes (Spring, p. 48). In 2012 the Institute of Medicine (IOM) released Acceleration Progress in Obesity Prevention: Solving the Weight of the Nation. The report suggests many goals that aim towards resolving the obesity epidemic; including making schools the primary leader. The report calls for everyone from politicians, business owners, to people of the community to coordinate with schools to support obesity prevention. The report recommends that schools conduct their efforts by requiring effective physical education and physical activity, applying nutritional standards for all foods and drinks available at schools, and educating students in nutrition (Nihiser, p. 28).

Studies show that the public supports measures taken by schools to combat obesity. In a 2009 study, over 92% of parents surveyed believed that health education and physical education were just as important as the core subjects math, science, and English; 96% of parents believed that junk foods and soda should be limited by schools; 80% of parents claimed they wanted to get involved in helping make schools a healthier environment (Nihiser, p. 28). A main goal of our government is educating students for the global economy. Therefore, there is extensive testing in subjects such as math, science, and English. No teacher, politician, scientist, or any person for that matter can argue against the point that optimal nutrition promotes better learning. I did not do any research to prove this because I did not want to waste my time. It is common sense.

My point is, if our government is so worried about competing in the global economy then they should first think about the nutritional health of students. Before you go on a road trip you’re going to check the oil, other fluids, and put gas in the car. A lot of the gas that our student’s are getting contains contaminants. Just as a car needs clean gas, a human needs a clean nutritious diet to perform at a high level. If we can transform the average student into being an individual who is conscious of how the body works and the nutrition it needs to work efficiently, and who is aware of the problems that come with a poor diet, the effect would be monumental. Not only would we see positive changes in our youth, we would see positive changes for our future. We are educating future parents, workers, and consumers. If we transform the consumer, the market will change as well. Education is key, and that of nutrition could change the world and ultimately help us evolve as a human race. A snack is good for us, as long as it is the right snack. 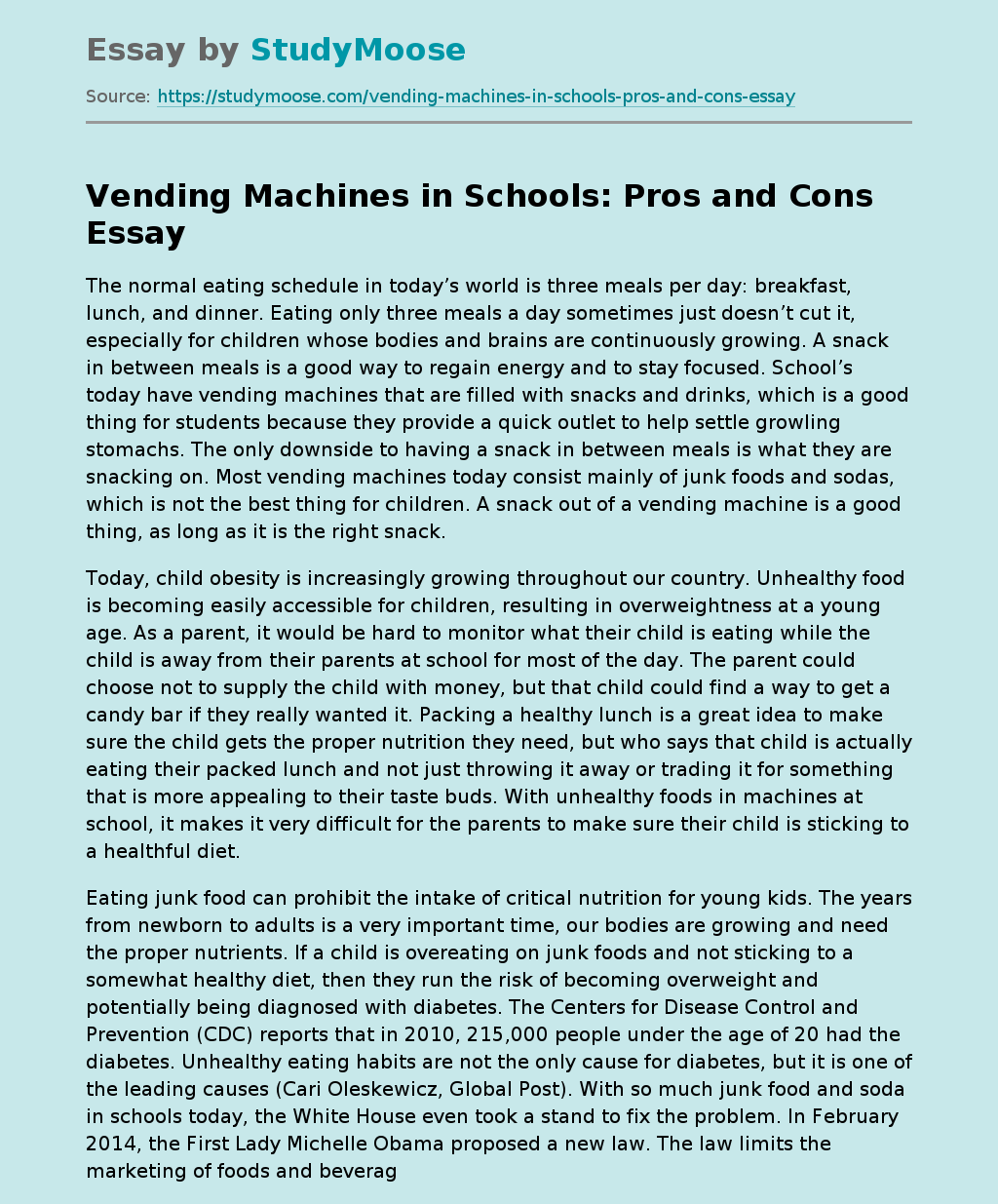