Also, overweight adolescents are more likely to be overweight as adults, and they are at higher risk of cardiovascular disease and diabetes.

Don't use plagiarized sources. Get your custom essay on
“ Vending Machines in Schools ”
Get custom paper
NEW! smart matching with writer

All-cause mortality is also higher among men who were obese during adolescence” (Forshee et al. 1121-135). The cause of increased overweight or obese adolescents is highly disputed. One hypothesis claims that the availability of foods high in sugar and fat in schools is to blame. “The school environment is recognized as having a powerful influence on students’ eating behaviors.

Ecological models of health behavior posit that such influence is multilevel and includes not only intrapersonal and social and cultural factors but physical factors as well” (Kubik et al.

1168-173). School environment is ever more important because children are spending more and more time in schools than they are with their parents. This has led people to question whether the present day school environment is having a negative impact on adolescent’s dietary behaviors. It is argued that school vending machines carry drinks and snacks that may not be the healthiest options for the youths.

A survey from the Center for Science in the Public Interest (CSPI), a Washington-based consumer group, “found that the vending machines in middle and high schools are filled with candy, cookies, chips, soft drinks and other sugary beverages, and very few fruits or healthy snacks” (Hellmich). This problem has gained significant interest and many solutions have been suggested. There is an ongoing debate between two frequently suggested solutions.

The first solution suggests that the removal of vending machines is necessary as it facilitates unhealthy dietary habits in adolescents. The other points out that removal will only shelter the youth from making dietary decisions they will eventually face. After further review of the two, it seems a ban on vending machines in schools is the only plausible solution. A major reason for the ban is that most vending machines contain unhealthy foods. A number of parents point out that the school environment does not reflect the health messages that they try to convey to their children.

A study by Weicha et al pointed out that “The great majority of US secondary schools sell items a la carte in the cafeteria and through vending machines, and these 2 sources often contain low-nutrient, energy-dense foods and beverages, commonly referred to as junk food” (1624-30). Another study by Martha et al. showed that “school-based snack vending machines were negatively related to the average total daily servings of fruit consumed by the young adolescents. With each snack vending machine present in a school, students’ mean intake of fruit servings declined by 11% (P=.03)” (1168-173).

The solution to this may sound as easy as replacing the “junk food” with healthier options, however healthier options don’t sell. This affects both the school and the vending companies. “Pouring rights contracts exist in the majority of schools and/or districts with whatever influences they carry on the promotion of soft drink sales in the schools, but they almost certainly create an incentive for school administrators and school boards not to discourage the sale of soft drinks to students.

Threshold incentives, whereby the school receives added incentives for meeting certain sales goals, above and beyond the percentage of soft drink receipts they routinely receive under the pouring rights contract, still exist in schools attended by a quarter of middle school students and nearly one third of high school students” (Johnston et al. 209-25). Vending machines are a good source of income for schools and this extra income allows them to offer more activities to their students. However, the extra income is not worth risking the health of students.

Governmental involvement to help regulate the contents of vending machines may be a plausible solution. However, currently there isn’t much regulation and a complete ban on vending machines is the only plausible solution for now. In addition to that, most adolescents, especially those in elementary and junior high levels, do not have the mental capacity to be making the right decisions at that age. This is a key reason as to why the purchase of alcohol and tobacco is controlled by age restrictions.

A study by Kubik et al stated that “more machines at school represent more low-nutrient snack selections and more opportunity to purchase such items” (1168-173). Their findings also suggest that “students with access to snack vending machines at school are choosing low-nutrient vending snacks instead of fruit, a practice that undoubtedly contributes to the habituation of unhealthy dietary behavior” (Kubik et al. 1168-173). Also another study by Weicha et al concluded that “among students who use school vending machines, more report buying sugar-sweetened beverages than any other product category examined” (1624-30.).

Also some students may not be able to get to the cafeteria before it closes for various reasons; vending machines provide them with the convenience. They also allow for students to grab a drink after vigorous exercise. However, a problem with all this is that it may disrupt regularly scheduled meals. This in turn “greatly disturbs the natural biorhythms of the body. Because the body performs certain functions on a time schedule, irregular eating habits disrupt the natural clock-work of bodily processes” (“Is Eating Between Meals Healthy? “). As mentioned above, vending machines are loaded with junk food.

Junk food is known to increase blood sugar levels which can lead to behavior problems and impaired learning ability in children. This is sometimes called the spike and crash syndrome. It is defined as “the rapid ups and downs of children’s blood sugar levels when they eat too much sugar and overly processed carbs, especially on an empty stomach” (Lapine). The children start “acting as if they’ve had four cups of coffee and are bouncing off the walls and then, in a predictable amount of time, they crash — growing sleepy, lethargic, and cranky.

For people who are particularly sensitive, the crash may be accompanied by shakiness, irritability, fogginess, and a feeling of intense hunger even though they just ate an hour ago” (Lapine). Finally, vending machines undermine the school lunch program.

The school lunch program can be used to make sure children’s nutritional needs are met and allows for a more controlled food environment. Having vending machines allows children to skip the lunch program and eat whatever they want; whenever they want. All in all both solutions have their strong and weak points and after further review it seems the removal of vending machines from schools is the only solution to this problem.

It is important to note that most of the major problems are not caused by the presence of vending machines in schools but by what is sold or contained in them. The only time their “presence” could be a problem is when their availability begins to disrupt regularly scheduled meals. The solution however is not as simple as replacing the contents of vending machines. Schools and vendors are having a hard time selling healthy options to children. This creates a conflict of interest. Schools need the money to fund student activities and vendors need to make a profit. Government involvement is needed to help with the problem.

More states need to follow the example set by the State of California which “despite some resistance from school food providers, contractors, and industry lobbyists; implemented a new policy that mandated the elimination of vending machines or, if there were vending machines on public school property, they had to offer only healthy products” (Suarez-Balcazar et al. 335-45). Works Cited “Fact Sheet – Childhood Overweight and Obesity Prevention Initiative. ” Office of the Surgeon General (OSG). U. S. Department of Health and Human Services. Web. 24 Oct. 2009. . 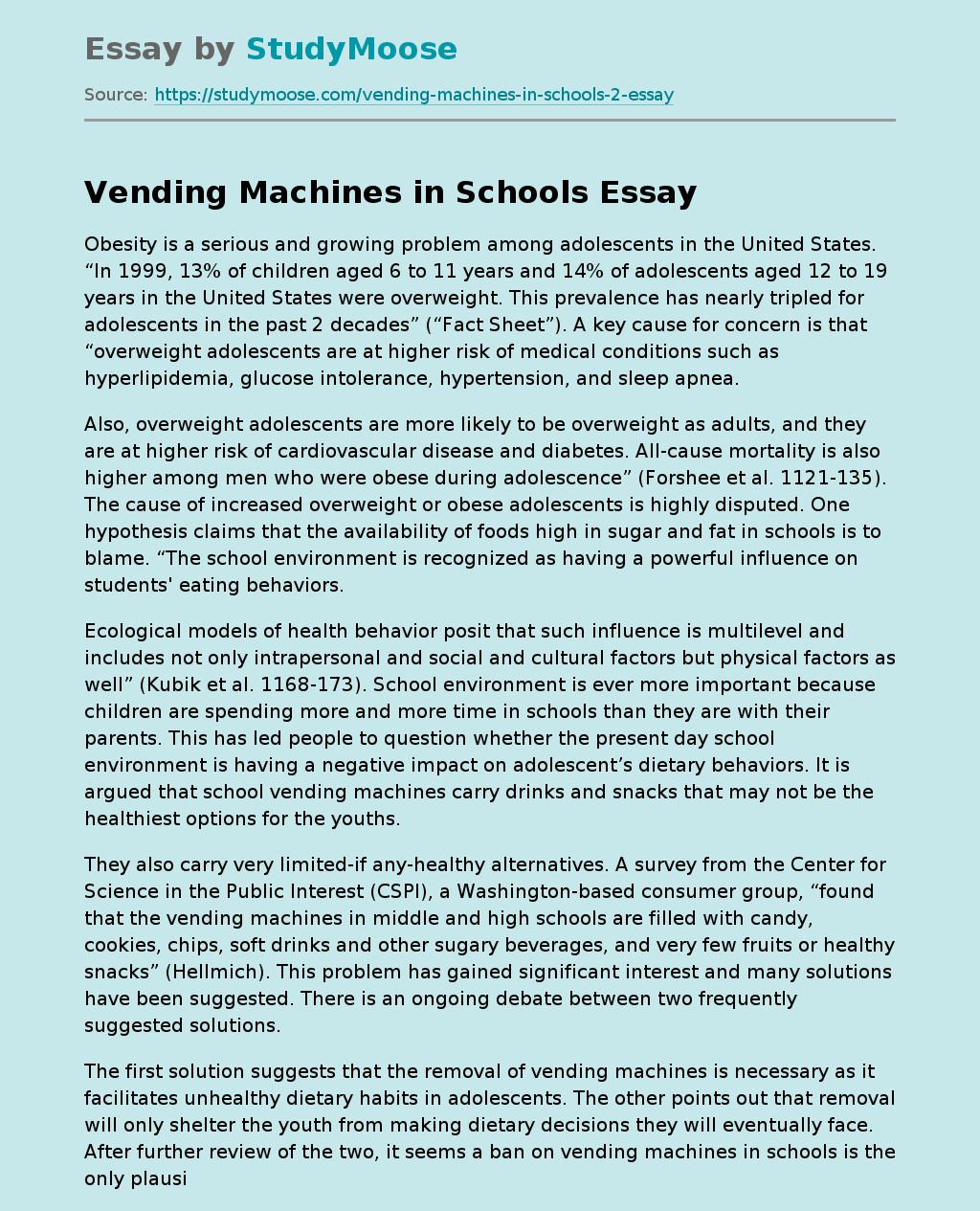