Values in The Club by David Williamson

On the outer surface, David Williamson’s ‘The Club’ is an intriguing and humorous play about the power-plays within a Melbourne football club. But when delved in more deeply, it can be seen that this seemingly simple Australian comedy is a serious indictment of our life and times.

Selfishness, jealousy, envy and greed. These are the images portrayed by the characters of ‘The Club’. In essence, they are driven by self-interest, willing to compromise personal and institutional integrity for personal greed and gain.

All six characters demonstrate this in one way or another – from the obvious egocentricity of Jock and Gerry to the seemingly loyal and unfaltering Laurie: firstly in his previous ploy to eventually oust Jock and then contemplating sacrificing Danny if it meant he had a better chance of rising to the top:

GERRY : Laurie, what if I told you I could swap, Danny for Tony Marchesi?

That’s made you stop and think, hasn’t it?

GERRY : No, but it made you stop and think, which goes to show that the central assumption of the science of economics – that we’d sell our grandmothers if the price was right – isn’t all that far wide of the mark.

How does this relate to the ‘real world’? Some may say it doesn’t – that it is just a fictional story about football; but the behaviour and personality of the characters, if not the characters themselves, are easily recognisable in everyday life, and that in itself is an indictment on our life and times.

‘The Club’ brings to light the power struggles that are eminent all around us – not only in football clubs, but at all levels – from business to politics to international relations. The audience is intrigued by all of this – absorbed by the double-dealings and the turn of events that lead to the downfall of others. This reveals personality traits centred around individual gain, and the fact that life is dominated by this kind of behaviour is also a reflection of the society we live in.

TED : The very first thing I did after the election was go out and buy the best administrator in the business, and now, eighteen months later, Jock is in cahoots with my administrator and the two of them are running the Club. (page 30)

JOCK : That’s crazy talk, Laurie. Do you honestly think I’d sabotage the club just to get back at you?

What is ironic is that Gerry and Jock’s continued success relies on the failure of the team. This again demonstrates a common will to compromise institutional integrity for personal greed and gain. All of the characters are driven by aspirations of greatness – to be the best, and are happily willing to trample over others to achieve this. Ultimately, to be the best at all costs.

The power struggles and egotism evident in the play are not the only condemnations of the life and times we live in. Geoff’s tale about his ‘connections’ with his mother and ‘legless sister’ serves as a pivotal point in bringing to light the shortcomings of the ways of thinking and the attitudes which plague modern life. Regardless of whether they believed the story or not; the fact that this is used as comedy, and is taken as a joke by readers and audiences, is a cause for concern. What this shows is a social order lacking in moral fibre. It also touches on a number of important issues – women’s rights being one of them.

The role women play in society is an important issue raised by Williamson. In the script, they are regarded as irrelevant. The issues of domestic violence and women’s rights are considered unimportant, even funny. This is epitomised first in Jock’s account of bashing his wife (not for the first time) and then again in Ted’s outburst at being accused of assaulting the stripper:

JOCK : Tubby Robbins took me apart in the ’39 Grand Final and when I got home Rosemary said, ‘I think you met your match today,’ and I thumped her one. (page 25)

TED : She egged me on all through her act, Laurie. Eyed me off, stroked my hair, asked me to take off her garter – I played the vamp for all she was worth, but then when I went round backstage she switched it all off and treated me as if I was dirt under her feet. Nobody treats me like that, Laurie, least of all a little trollop like that. I’m the President of the greatest football club in the history of the game and I won’t have some little slut laugh in my face. (page 58)

Statements like these are disregarded as trivial, and in Jock’s case, they are regarded as part of everyday life. Ted and Laurie even imply that the assault of the stripper would have been brushed under the carpet under ordinary circumstances. This is true. We live in a society where even though domestic violence and abuse are illegal, they are not taken as seriously as they should. Cases go unreported, and the issue as a whole is even considered as a joke by some.

In short, ‘The Club’ uses intrigue and humour to expose the faults and shortcomings of the society we live in. By taking a good look around us, we can see bits of Jock, Ted, Gerry, Laurie, Danny and Geoff; and the values that they stand for are evident everywhere in society.

Values in The Club by David Williamson. (2016, Jun 21). Retrieved from http://studymoose.com/values-in-the-club-by-david-williamson-essay 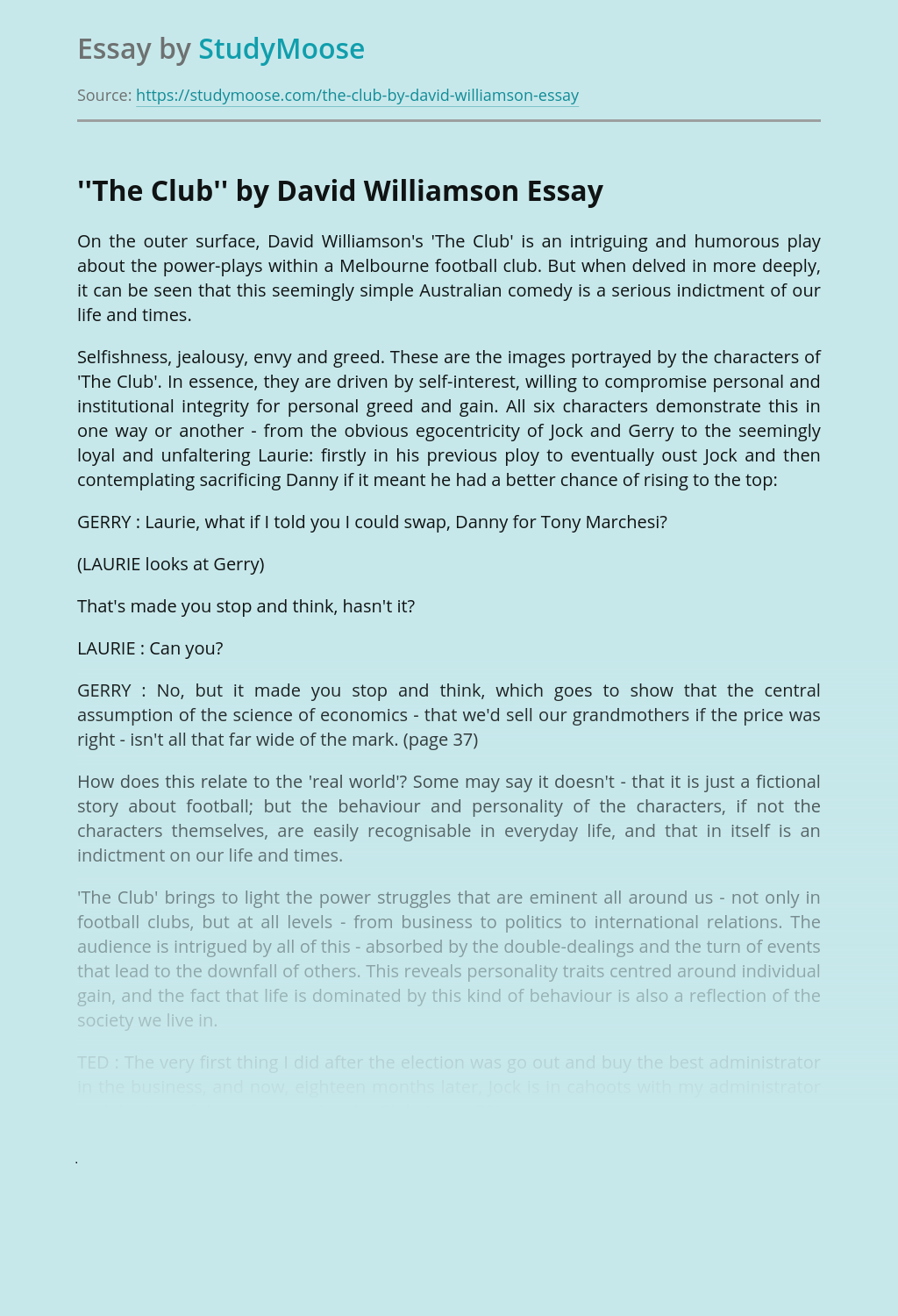 Don’t waste time
Get a verified writer to help you with Values in The Club by David Williamson
Hire verified writer
$35.80 for a 2-page paper
Stay Safe, Stay Original