A survey showed that an average woman takes 300 hours applying makeup and spends an enormous $13,000 on it in her life time. Everyone wants to look and feel their best and that is one aspect that we as humans share in common. People often say beauty is in the eyes of the beholder, but if you really analyze it, beauty is in the eyes of society which was the case in Ancient Egypt. According to past records, aesthetic beauty was prized just as it is today.

Don't use plagiarized sources. Get your custom essay on
“ Using Cosmetics ”
Get custom paper
NEW! smart matching with writer

Using cosmetics to enhance beautiful features such as the eyes or lips, has been around for centuries dating all the way back to Ancient Egypt.

The Ancient Egyptians are accredited with the earliest archeological records of cosmetology 3100 B.C. Paintings and hieroglyphics of Ancient Egypt suggest the use of cosmetics was not just for woman, but also helped distinguish Egyptians of upper-class. Both men and females wore eyeliner, weather it being for mere fashion or class.

Wearing eyeliner was actually beneficial to protect them of the scorching sun, bugs, harsh desert conditions, or other forms of disease, however, the ancient Egyptians believed that these positive effects where magical rather than medical and therefore incorporated the use of cosmetics in religious ceremonies or rituals. One of the greatest findings of evidence for the use of cosmetics back in ancient Egypt, was when the tomb of the pharaoh Thutmosis 3 was discovered and all sorts of consorts of cosmetic jars were found filled with mascaras, lipsticks, eyeshadows and cleansing oil.

The use of eyeshadow was also quite popular for both men and woman, eyeliner was made by grinding a substance known as kohl, which then was used to accentuate the eyes. Eyeshadow was made out of green Malachite for the Egyptians to imitate the appearance of their many gods. Soon after, the trend of wearing makeup spread to Rome where its popularity grew and there even was a period that women were not considered beautiful if they did not wear it. This lead to the inflation on prices and only women of high class were able to afford it. While history does state that the Ancient Egyptians were the first to cultivate the use of cosmetics it was the Romans who embraced it and managed import much of the Egyptian secrets and products back to their country.

As the Empire of Rome expanded its realm, they integrated the traditional customs of the nations and the Greeks including cosmetics. Soon the Romans were known for their aqueduct water system in which they pumped water from miles away into baths, hence the first spas were born. The ancient Roman women usually had an array of popular remedies of their own for fighting against sunspots, wrinkles and freckles that may occur over time. A younger appearance was accomplished by painting the eyes a variety of colors to produce this effect and an illusion of longer eyelashes. Eyebrows were tinted and having white teeth was a sign of beauty for the roman women, some even managed to make false teeth by using paste or ivory. Contrast to Rome’s white elegant smile, China and Japans style was to blacken out the teeth completely using soot or ash. Both Chinese and Japanese women would spend hours each day tending and brushing their hair to meet the standard of beauty.

In the Renaissance era, typically light-skinned was not only informing people that they were wealthy, but was also considered a sign of delicacy and was beautiful by society’s standard and so many sought after it. In addition to having a fair complexion, woman would pluck their eyebrows thin or even remove them and then either pencil them in of any color or apply false eyebrows on, which were made out of mouse skin. Because at this time in history sunscreen was unheard of, woman having fair, smooth skin was a rarity especially in the lower class who had dark skin due to the damage caused by the sun. As a result, women lightened their skin using white lead paint in the 16th century and even Queen Elizabeth 1 of England was notorious for using this toxic mixture of lead in her daily beauty routine. This motley mixture would be left on for days even weeks, and when they would take it off they would often use rosewater, honey, lemon juice or crushed eggshells. Many women thought it made their skin feel resilient and soft, but in reality, the poisonous cosmetic mixture was eating away of their skin, creating more blemishes they were trying to hide in the first place.

While applying this concoction of lead of vinegar may have smoothed a woman’s complexion every day, over time it caused hair loss, skin discoloring and even rotted teeth. However, this information still did not stop women coming up with their own concoctions to help them achieve the fashionable fair complexion. By wearing creams and powders made of lead, arsenic, vinegar, bleach and mercuric chloride, many women who still believed it was worth the cost, fell sick in a brief amount of time while others used this new found knowledge to their advantage. A handful of wealthy women who wanted complete authority over their household’s wealth or suspected an unfaithful spouse, would ask for a kiss on the check by their husbands, eventually killing them by the poisonous cosmetic, however, if the powder was grounded fine enough it would kill the wearer too.

Because of the high death rate, the Catholic officials of the Church actively discouraged the use of makeup, but not just for the health of the people of England. The Church also believed that wearing makeup arouse sinful thoughts in men and that only sinners such as prostitutes or Satan worshippers would wear it. Kings and queens made public statements that how wearing makeup was not appropriate and deemed only acceptable for stage actors to use them, but only for performances. Comparing from the past, cosmetics that were popular in the time of the 16th century England are drastically different from our current world and trends we wear today. Although the Elizabethan woman were trying to achieve a very different look, it is important to understand the ideal model of beauty and standards of society are always changing. 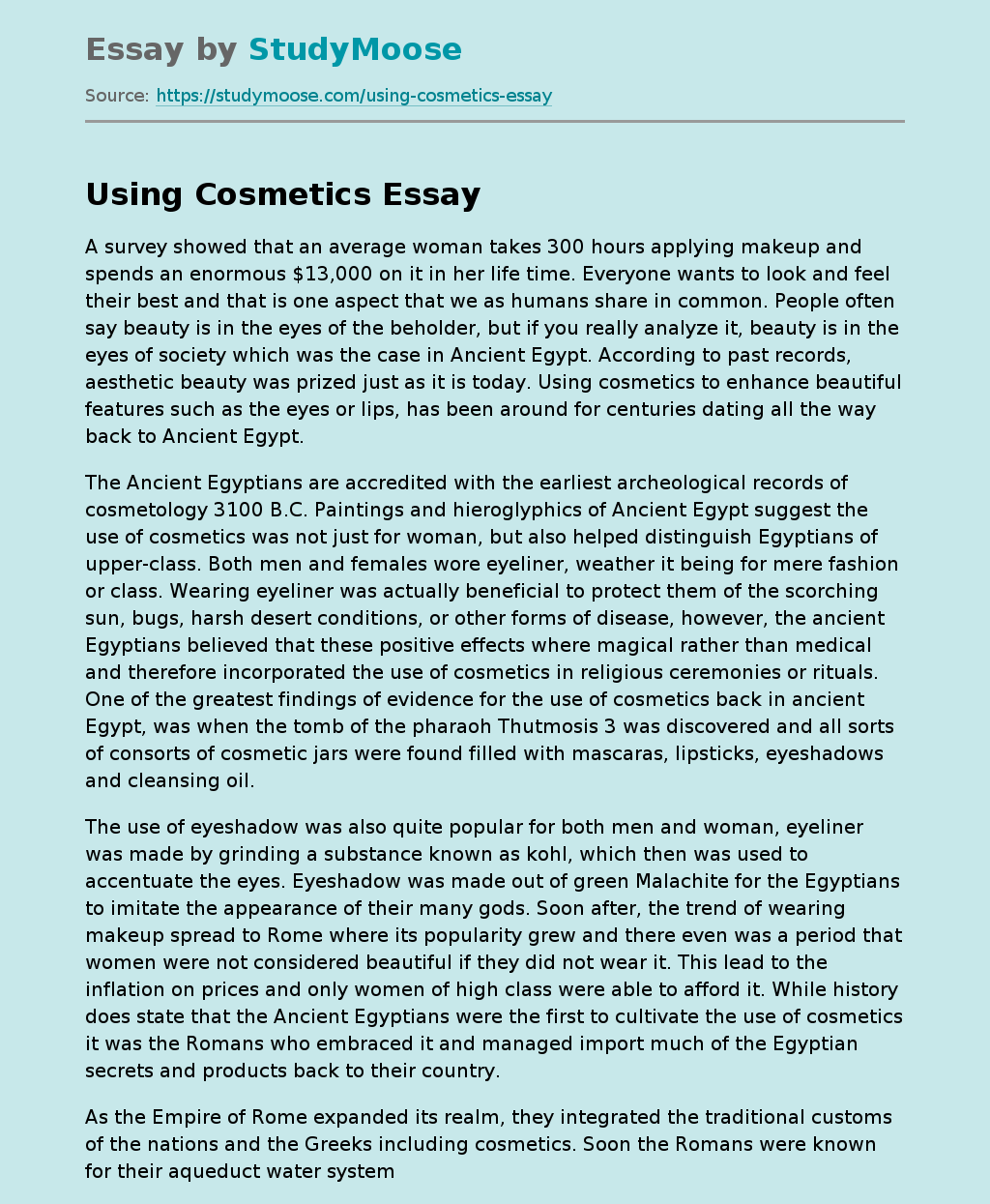