There are numerous reasons for identifying unknown bacteria. Some of these organisms have distinct qualities that set them apart from one another, such as the exposure to certain environments. Through out the semester in the laboratory, we are able to encounter some of the few microorganisms that we as humans have come into contact with. With the knowledge gained from the sessions in the laboratory, we can now integrate what we have learned to the process of finding out the unknowns given.

The professor gave out the unknown specimens. It contained one-­‐gram positive and one-­‐gram negative bacteria from the given list. I was assigned unknown A. The process of identification was achieved by utilizing procedures learnt during the semester. Procedures were followed as stated in the lab manual (1). Since the sample contained two unidentified bacteria, the first step was to isolate each bacterium using streak plate technique. Tryptic Soy Agar (TSA) plate, and differential media such as mannitol salt and Eosin methylene blue (EMB) were used for isolation streak technique.

This step is imperative because the bacteria need to be separated and isolated before they can be identified. Moreover, gram staining was used to understand the basic morphology of these bacteria. As these plates were incubated and grown, the presence of two separate bacteria colonies was visible. The colonies from the mannitol salt were used to incubate a TSB broth to grow the gram-­‐positive culture. The purity of this broth was tested using gram-­‐staining technique.

A circular colony from the TSA plate was used to incubate a TSB broth for gram-­‐negative growth. Similarly, examining the morphology of the bacteria-­‐using gram staining technique tested the purity of the both.

After the isolation of gram-­‐positive and gram-­‐negative bacteria from unknown A, specific biochemical tests were performed. The results of the biochemical tests along with deductive reasoning and elimination led to the identification the unknown bacteria. The following tests were performed on the gram-­‐positive bacteria: 1. Mannitol salt streaking 2. Gram stating of the pure isolate 3. Oxidase test 4. Catalase test 5. Coagulase test The following tests were performed on the gram-­‐negative bacteria: 1. Gram staining of the pore isolate 2. Blood agar plate streaking 3. SIM (Sulfide, Motility, Indole) test 4. Catalase test Results

SIM (Sulfide, Motility, Indole) test 1. To determine the ability of an organism to liberate hydrogen sulfide (H2S) from

SIM medium and indole reagent The medium showed no color change, motility, or color change when indole test was done.

sulphurbearing amino acids producing a visible, black colour reaction. 2. To determine the ability of an organism to split indole from the tryptophan molecule. 3. To determine if the organism is motile or non-­‐motile. Discussion and Conclusions:

The biochemical tests performed on the gram-­‐positive bacterium worked systematically to narrow down the possible species, and eventually eliminate every organism on the list except the correct one. The gram stain, that showed the gram positive cocci and the transformation of the mannitol media to yellow color left me with two choices that fit this profile-­‐ Micrococcus luteus and Staphylococcus aureus. Biochemical tests that differentiate these two were performed. These included, oxidase, catalase, and coagulase test. The results of

these tests (oxidase negative, catalase positive, coagulase positive), confirmed that the gram-­‐positive microorganism in unknown A is Staphylococcus aureus. After the Gram+ bacterium was identified as such, further tests were performed to narrow down which particular Gram- species this was. The first test done was blood agar plate. The results show that after incubation the blood agar media displayed beta hemolysis, metallic sheen, and blue-­‐green pigmentation.

Colonies of Pseudonomas aeruginosa often display similar result on this medium (2). To confirm the inference, oxidase, SIM, and catalase tests were performed on the gram-­‐negative isolate. The results showed that the bacterium was oxidase positive, SIM negative (-­‐/-­‐/-­‐), and catalase positive. Similar results are characteristic of P. aeruginosa. Hence, the gram-­‐negative microorganism in unknown A is Pseudonomas aeruginosa. Appendix:

Fig.1. Photograph of the blood agar medium (after incubation) streaked with the gram-­‐positive isolate of unknown A. References (1) Harley, J. P. (2014). Laboratory Exercises in Microbiology . University of Kentucky : McGraw Hill 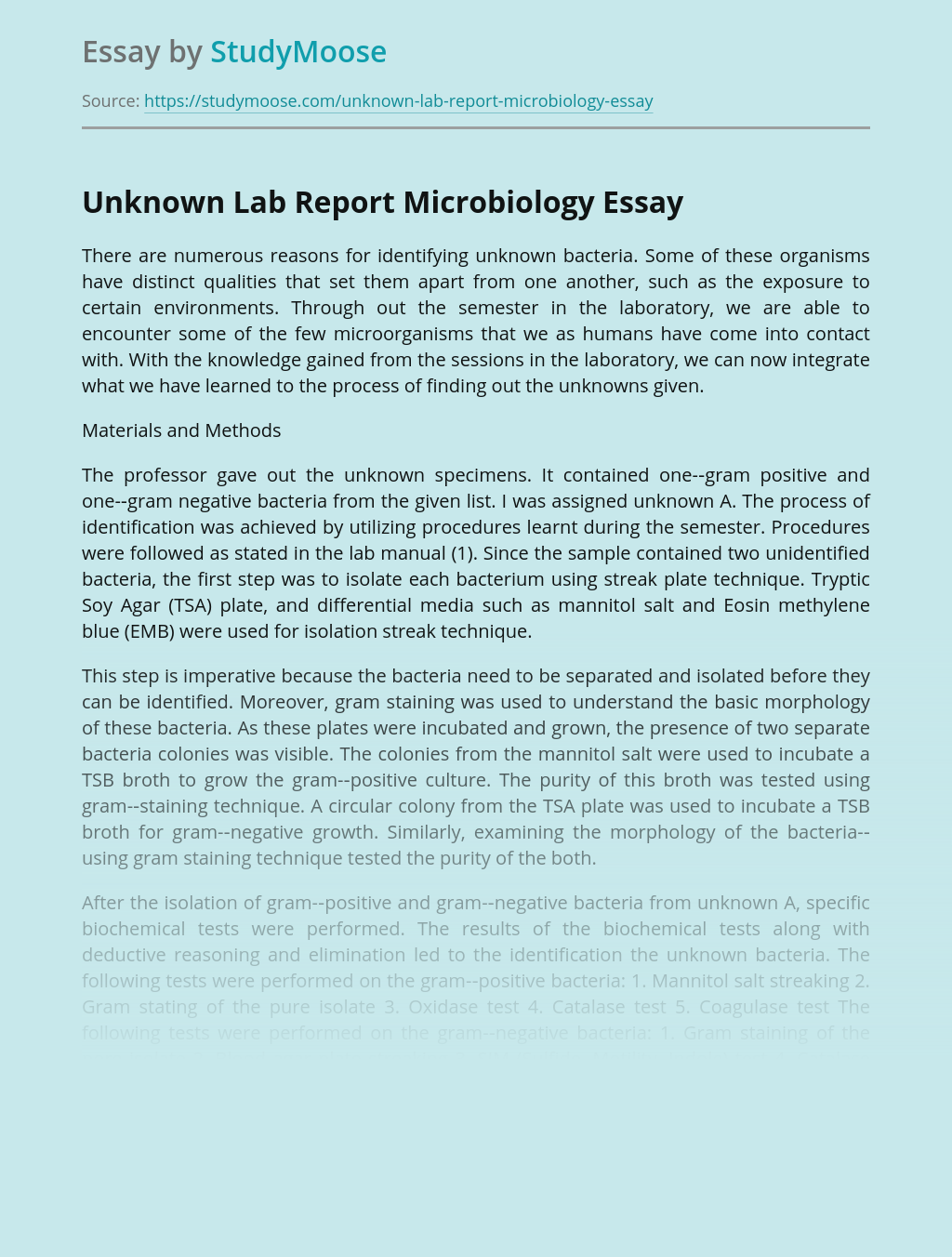 During the month of Kartik in the Bikram Sambat calendar

Introduction It is the responsibility of the HR department of Landslide Limo services to provide data for the task proficiency and an analyses and minimum qualifications to staff the business. The HR department is responsible for speaking with candidates, incorporating info gathered by the rest of the department to determine financial and wage recommendations and...

A careful analysis of the teacher-student relationship at any level, inside or outside the school, reveals its fundamentally narrative character. The relationship involves a narrating Subject (the teacher) and patient, listening objects (the students). The contents, whether values or empirical dimensions of reality, tend in the process of being narrated to become lifeless and petrified....

Do the rich really live happier lives? Every week ‘70% of Britain’s adult population’1 rush out to buy a lottery ticket, that’s a staggering 45 million people who dream of having their lives changed by an influx of wealth. All of us have dreamt about winning the jackpot on the lottery at least once in...

The concepts of surrogate, pneumatic, animality and soma have an important function on the allegorical level for their repetition strengthens the allegorical meaning. These words symbolize the state of dehumanized man the condition to which man in a totalitarian society might easily be reducec. And our society has traits of the totalitarian in it. Bernard...

Question 1 – A Leadership has been brought up more and more over the years which led to numerous definitions and interpretations of the concept. The most unsophisticated definition for it would be “having followers” according to Storey et al. (2016). A great amount of skills and qualities has to be on deck in order...