The United States of America has been struggling to resolve the issues of its health care system for decades now. Looking at the history of previous policies, all issues have stemmed from one major common factor, the cost of health care. With cost at an all-time high, the quality of and access to health care are relatively affected. Therefore, the reshaping of the health care system can only be effective by improving the affordability and quality of coverage for those who are currently insured, and improving the access to and the overall quality of care that individuals receive; thereby conquering the ultimate goal of constraining the growth of health care costs.

Don't use plagiarized sources.
Get Your Custom Essay on U.S. Healthcare Costs Just from $13,9/Page

Health care spending had increased drastically over the past years. As a result, approximately 52 million Americans today are uninsured. Some are forces to make life decisions in regards to paying for services. While on the other hand, those who have insurance cannot seek the best care available as the coverage’s are limited, yet the premiums are high.

In addition, there are those who have limited access to service. Some of the reasons include lack of transportation, being elderly, or even living in a lower income neighborhood. Another major problem of the health care system is the quality of care as geographic location, religion, or sometimes, social status may be determining factors in the level of care given. Let’s explore some major developments in the evolution of our health care system and where we stand today as a country, while viewing the status of the current reform.
How a problem is defined determines the consequences of public policies. Because of health care spending, fiscal issues have dominated the strategies, courses of action, and outcomes of Medicaid. It is stated that 1.2 billion Americans retained coverage in the first year. By the year of 2007, that figure vastly increased to 333 billion Americans with Medicaid, surpassing Medicare in the year of 2001. At this time, fifteen percent of health care spending was comprised of Medicaid (“Congressional Digest”, 2007).

The textbook describes the various stakeholders in the United States health care system as the public, which are the people who will receive the benefits. The employer is the payer of the medical service that will be given out to their employees. Providers consist of medical professionals
who provide the service to the community. From a government perspective, their role includes payer and regulator. Institutions such as hospitals and pharmacies creating availability for providers to service care are the facilities. While an organization that dictates levels of coverage based on age, sex, weight, health status, and the chosen policy is the insurance company (Sultz, 2012).

Ironically, United States of America citizens are highly dissatisfied with the cost of healthcare, the quality of the service given, and the access to proper healthcare. Lack of health insurance or increasing insurance premiums (that may not cover the necessary service) was the main underlying issue. This issue further created the problem of “duplication and inefficient care”, which means the quality of service is affected. When quality is affected, the cost is directly affected. Respectfully, if the cost is affected negatively or positively, satisfaction is indirectly influenced. Satisfaction determines the status of any business, even the healthcare system. The P.P.A.C.A. (Obamacare) is a health care reform designed to create a better healthcare system. According to Jennifer Tolbert, the Associate Director for the Kaiser Commission on Medicaid and the Uninsured, the goal of the Obamacare “spanned into four key areas: expanding coverage to millions of Americans who lack it today; improving the affordability and quality of coverage for those who are currently insured; improving access to and the overall quality of care that individuals receive; and constraining the growth of healthcare cost” (Tolbert, 2010). If everyone is obligated to have insurance or pay a fine regardless of health status (pre-existing conditions), then it is assumed that the cost of health would be spread amongst all Americans. The ending result seems to be the increase in insurance premiums. As a result of increase in premiums, states are acting individually, challenging the constitutionality of the P.P.A.C.A. (Faria, 2012). In the end, American citizens are hoping for the best outcome, a better health care system.

So, where do we stand as a country
In conclusion, there have been several attempts to resolve the issues of the United States health care system. Dated as far back as 1954 when the tax incentives were given to the current reform, the P.P.A.C.A. of 2010, the cost of health care is still a major concern. Compared to other countries, our health care spending is highest and our quality ranks on of the lowest. In order for this country’s health care system to progress, everyone has a part to play. Whether a government official, medical personnel, third-party insurance, public insurance, or the person receiving care, every part is equally important. Without consistency, implementation will fail. With inconsistency, affordability and quality cannot be improved; access will grow scarce in rural areas, which will continue to negatively affect the cost of health care. Although life has no price tag, the cost of health care as a worry can be eliminated if rules, regulations, policies, and procedures are implemented properly to constrain and manage health care cost. 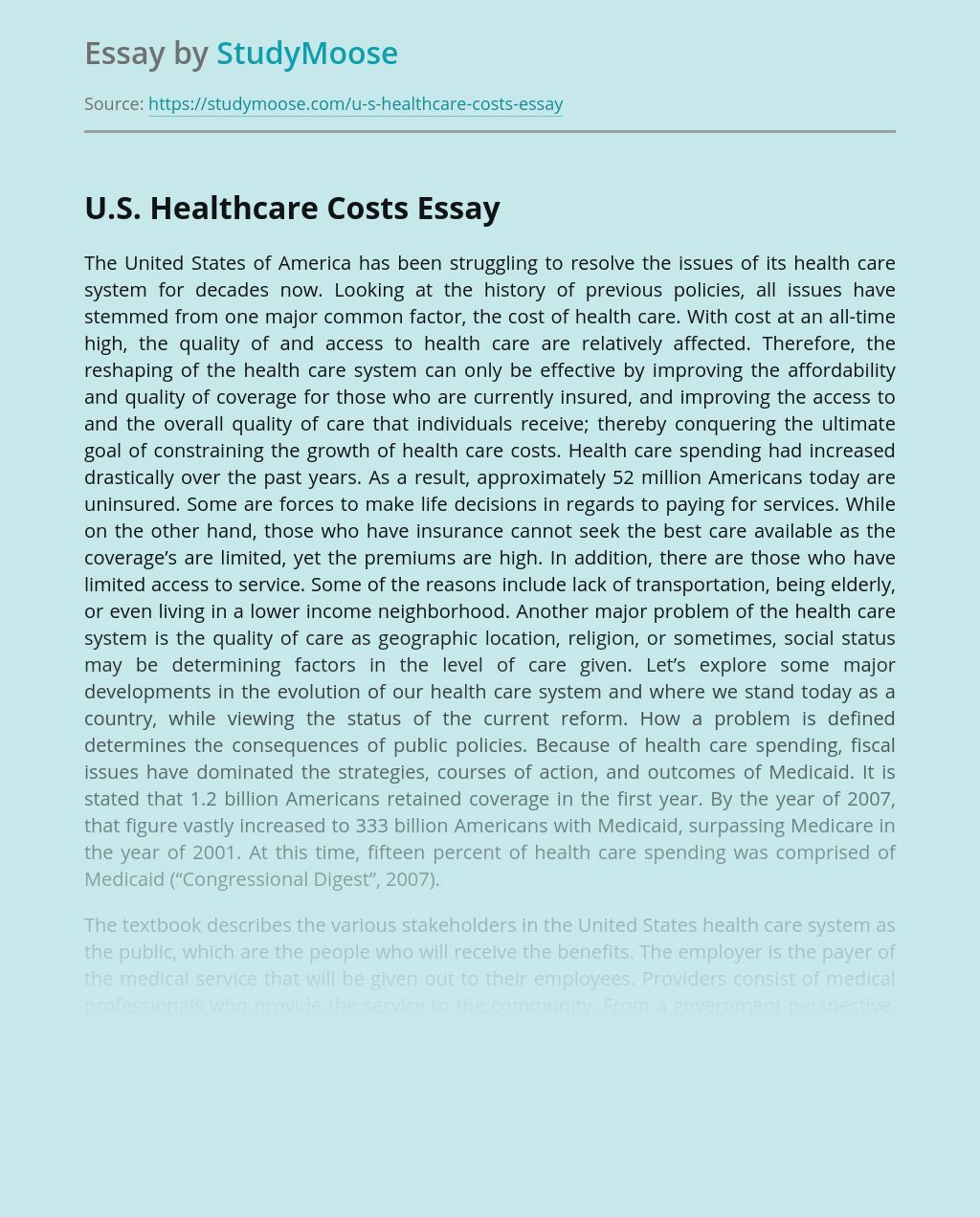 1. If Wilkerson were to cut prices, based on contribution margin, to just cover short-term variable costs, what consequences could it experience? (5 marks) Several break-even-point assumptions are made in calculation: 1) Total fixed costs do not change with volume, and will exist regardless if the products are sold or not. 2) Sales mix will...

The function of this analysis is to maximize revenue of Shelby Shelving Business, manufacturing 2 kinds of shelves for supermarket; Model S (basic model) and Design LX (heavy duty model). The plant’s engineer suggested that Model S manufacturing need to be cut off as they are sold less than their production cost. On contrary the...

After making some wise short-term investments at a race track, Chris Low had some additional cash to invest in a business. The most promising opportunity at the time was in building supplies, so Low bought a business that specialized in sales of one size of nail. The annual volume of nails was 2,000 kegs, and...

A contact lens for chickens invented by Optical Distortion, Inc, is most likely a remarkable tool for farmers to manage their chickens easily. A chicken wearing the ODI lenses has its vision minimized enough to acquire the etiquettes the farmers anticipated. These great habits would significantly reduce cannibalism, which is the primary factor for high...