Activity 1 The Muscle Twitch and the Latent Period

Motor unit-A motor unit consists of a motor neuron and all of the muscle fibers in innervates.

Electrical stimulus- used to mimic the contractions of skeletal muscles Latent period-Latent period is the period of time between the generation of an action potential in a muscle cell and the start of muscle contraction.

End plate potential is caused by the events that occur at the neuromuscular junction.

Describe the three phases of a skeletal muscle twitch.

The first phase is the latent period- this is the period of time that elapses between the generations of an action potential in a muscle cell. The second phase is the contraction phase- in this phase, the muscle fibers shorten.

The third phase is the relaxation phase- in this phase, the muscle is going back to its original stae of relaxation and it will once again lengthen.

Activity 2 The Effect of Stimulus Voltage on Skeletal Muscle Contraction

Describe the effect of increasing stimulus voltage on isolated skeletal muscle. Specifically, what happened to the muscle force generated with stronger electrical stimulations and why did this change occur? How well did the results compare with your prediction? As the stimulus voltage is increased, the amount of force in the muscle also increases. Each time the voltage was increased more fibers activate and it causes the total force produced to increase.

How is this change in whole-muscle force achieved in vivo? It is achieved by recruitment of more motor units that increase the total muscle force.

In this experiment you observed the effect of stimulating the isolated skeletal muscle multiple times in a short period with complete relaxation between the stimuli. Describe the force of contraction with each subsequent stimulus. Are these results called treppe or wave summation? These results are a treppe. This is because there was a isolated skeletal muscle stimulated multiple times in a short period. Each stimulus increased progressively in step like formation to a maximum limit where a plateau in force occurred.

How did the frequency of stimulation affect the amount of force generated by the isolated skeletal muscle when the frequency of stimulation was increased such that the muscle twitches did not fully relax between subsequent stimuli? Are these results called treppe or wave summation? How well did the results compare with your prediction this was a wave summation. This is because the stimulation frequency was increased to the point in which relaxation did not occur. The muscle twitches overlapped.

Compare and contrast frequency-dependent wave summation with motor unit recruitment (previously observed by increasing the stimulus voltage). How are they similar? How was each achieved in the experiment? Explain how each is achieved in vivo. Frequency-dependent wave summation is dependent upon stimulation by the nervous system. The motor recruitment depends upon the number of motor fibers available

Indicate what type of force was developed by the isolated skeletal muscle in this activity at the following stimulus frequencies: at 50 stimuli/sec, at 140 stimuli/sec, and above 146 stimuli/sec. at 50-unfused tetanus

Beyond what stimulus frequency is there no further increase in the peak force? What is the muscle tension called at this frequency? maximal tetanic tension

What are some proposed causes of skeletal muscle fatigue? the build up of lactic acid, ADP and Pi in the muscle fibers.

Turning the stimulator off allows a small measure of muscle recovery. Thus, the muscle will produce more force for a longer time period if the stimulator is briefly turned off than if the stimuli were allowed to continue without interruption. Explain why this might occur. How well did the results compare with your prediction? Turning the stimulator off, creates a period of rest. This allows concentrations intracellular concentrations of lactic acid to decrease. With that at a decreased level, the length of time for maximum tension increases. If the .

List a few ways that humans could delay the onset of fatigue when they are vigorously using their skeletal muscles. We cold delay onset fatigue by doing multiple sets of low repetition in exercise, allowing for multiple times of rest and a healthy diet and good amount of exercise.

Describe d happen in the following experiment: A 2.5-g weight is attached to the end of the isolated whole skeletal muscle used in these experiments. Simultaneously, the muscle is maximally stimulated by 8.5 volts and the platform supporting the weight is removed. Will the muscle generate force? Will the muscle change length? What is the name for this type of contraction? The muscle will still generate force and change length. This type of reaction is an isotonic contraction. 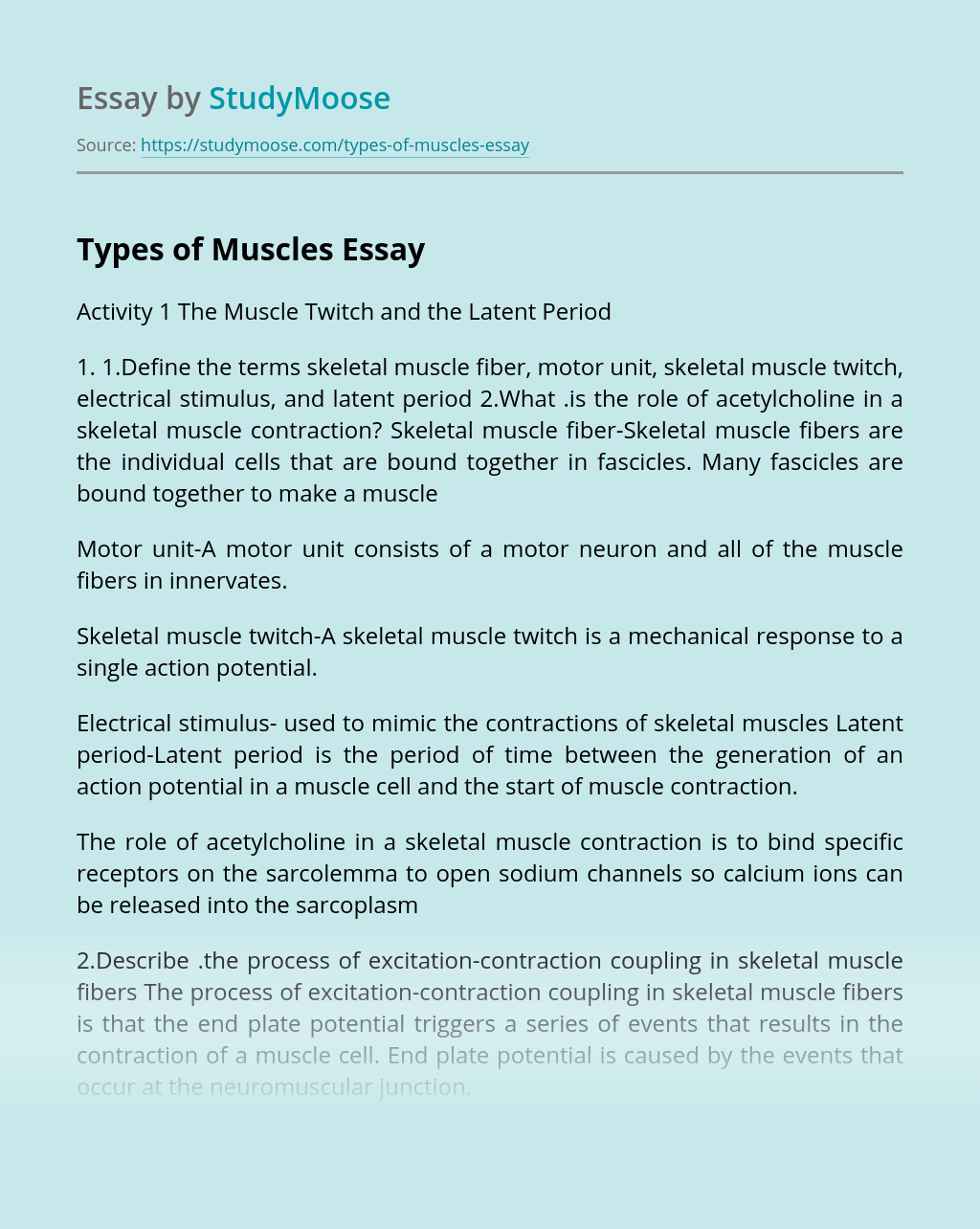