1950s America saw the nation fall into a period of national tension and idealogical turmoil following the McCarthy Trials and the Cold War, which produced a flourish of works such as Regnald Rose’s ‘Twelve Angry Men. ’ Using a jury of twelve anonymous men, the play scrutinizes both the strengths and flaws of the American judicial system. The case of a fictional “delinquent” who faces capitol punishment under charges of patricide acts as a vehicle to examine the moral dilemma of prejudice and judgement, and its importance, underpinning American jury rooms in a time of profound social division.

Through his structuring and characterizations, Rose does not merely attack the system, but contends is functionality stems from the very individuals within it, and their ability to see with objectivity and compassion. The New York skyline lying in the back of the room, and the very sparseness of the setting offers a constant reminder of the significance these characters play, not as individuals, but as representations of wider social groups of 20th century America.

This is used by Rose to mimic the social division of American society, scrutinizing its effects on its citizens.

The fate of the young and “dangerous killer” appears predetermined from the beginning, as eleven of the jurors are already convinced of his guilt, and believe he “knifed his own father. ” In particular, it is the 3rd Juror who epitomizes the notion of unjust judgement, as a consequence of his experiences and beliefs. Constantly upholding the proceedings of the case and undermining other jurors, he is determined to see his ill-founded criticisms put into practice and have the defendant prosecuted, expressing “we’d be better off if we took these tough kids and slapped ‘em down before they make trouble.

” It is evident from this statement that he holds very little regard for human life and he is unable to see the truth objectively. This inability to divorce personal pain from the cathartic decisions he makes is encapsulated in his final plea to see the boy killed, voicing “How they kill you everyday … I can feel that knife goin’ in. ” Rose has used the 3rd Juror’s inability to see the facts presented objectively and his actions mimicking those of a “self-appointed public avenger” to depict the grave impact a narrow minded view will hold on the deliberations of the jury.

Rose’s unresolved ending serves to ensure the audience do not determine a conclusive fate for the young and “dangerous killer. ” This is pivotal in his play, as it states that the truth of the case is of little consequence and will never be revealed, therefore emphasizing the significance of the deliberation itself. The 10th Juror displays characteristics similar to those of the 3rd, however his judgements are based solely on the socioeconomic and ethical status of the defendant, as he exclaims “They are wild animals/ It’s those people!

I’m tellin’ you they let the kids run wild up there. Well maybe it serves ‘em right. ” This statement not only depicts a lack of intelligence, but a mind distorted by what he believes. The 10th Juror is then revealed to have been raised in a similar context. which is pivotal in the development of his deeply racist thoughts, which stem from his inability to feel sympathy for those who had faced similarly difficult circumstances in their lives.

Described as an “ignorant man,” his xenophobic and bigoted sentiment are the obvious reason for his “guilty” verdict, which is based merely on his inability to accept other ethnic and social groups. A storm suddenly begins, mirroring the darkened mood and the growing tension between the jurors as they begin to distance themselves from the racist 10th Juror. One of the final jurors to change their vote, he merely accedes to the majority without ever understanding the notion that he or the witnesses may be wrong.

His expression “what, bust my brains over scum like that? ” again shows he is incapable of putting himself in others’ shoes, a factor imperative for his position if justice is to ever be achieved. However, it is not merely a one way deliberation, as the prejudices held by some are often challenged by the 8th Juror, a man tempered with strength and compassion. Through the 8th Juror’s moral actions, Rose presents the reader with a contrasting side of the judicial system, one of justice and equality.

The 8th Juror is able to single handedly stand against those who use bigotry and peer pressure to force their own distorted opinions upon others. “It’s not easy for me to raise my hand and send a boy off to die without talking about it first” juxtaposing the 3rd and 10th jurors, this highlights and champions the impact of individuals such as the 8th Juror, and the importance in objective thought. The 9th Juror is also used by Rose to help the reader ponder the importance of deeper rationale and impartial thought.

He is able to reflect on the facts presented objectively, allowing him to understand the personal incentive of the elderly witness’ potential perjury. Through his experience as a man defeated by life, he is able to sympathize with the witness’ motives, and understand that “a quiet, frightened, insignificant old man who has been nothing all his life” may have testified simply “to be recognized, to be listened to, to be quoted just once. ” This demonstrates the 9th Juror’s ability to use his own experiences not to judge others, but to think with greater depth and reason.

Characters such as these help to portray the importance of impartial thought within the jury system. Reginald Rose’s ‘Twelve Angry Men’ does not merely attack the jury system of 1957, but encourages the reader to ponder the social and civil responsibilities of those chosen to enter a courtroom, and the importance of open thought in achieving justice. Through the anonymous jurors, Rose explores the various groups of society within America, and the wide difference in views towards those of other ethnicities.

His characterization of the 3rd and 10th jurors displays the impact they may have on the democratic system, however the 8th and 9th and 11th jurors depicting integrity and impartial thought counter this. The 11th Juror clarifies “We have nothing to gain or lose by our verdict. This is one of the reasons we are strong. We should not make it a personal thing,” such words mirror Rose’s belief that the jury system is strongly reliant on its jurors ability to divorce their decisions from their personal beliefs and experiences. 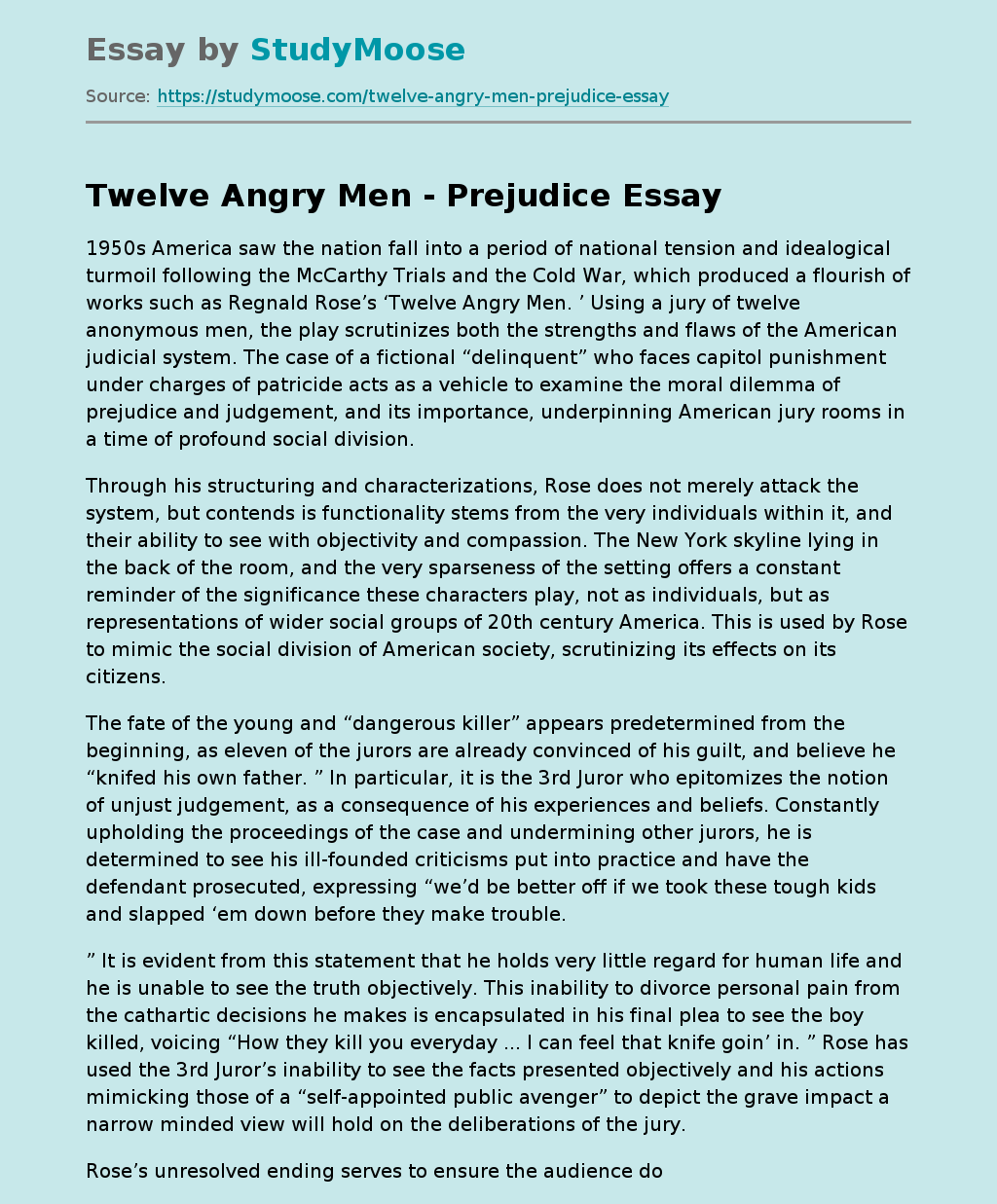