As a leader, one must be able to get people to follow him. A leader also know as the president must have certain character traits. But the most important qualities a leader must have in today’s society are: a vision, dedication, and integrity.

A leader must have a vision to where he can see his success. Which means he has have the drive to succeed and fulfill his vision. He can not sit and just hope for something to happen.

He has to make it happen. This can only be possible if he use his creative mind to come up with a plan to improve the flaws that are in the government/organization. A leader must also have the support of the people. In order to do that, the leader must explain his vision to the people so he can get them to accede with him In other words, the leader must be a person who is “on top of their game.

Dedication is a quality that all leaders must have. When a leader is dedicated, he is committed. He does whatever it takes to finish his task no matter how much sleep he has to lose over it. With such commitment his people will respect him because it shows he cares for them. This kind of work ethics will inspire others to work hard and have the same dedication. Which is good because a leader is supposed to set positive examples for others. Integrity is another essential quality a leader must have in order to do well in office. His actions must be the same as his feelings inside. This is a kind of person who can be trusted because he never veers from inner values, even when it might be expeditious to do so. And a leader must display integrity in order for his people to trust him because they can trust that his honest, reliable and looking out for their best interest. A leader is a role model. One who sets positive examples for others.

Tun Dr. Mahathir bin Mohamad (born 10 July 1925) is a Malaysian politician who was the fourth Prime Minister of Malaysia. He held the post for 22 years from 1981 to 2003, making him Malaysia’s longest serving Prime Minister. His political career spanned almost 40 years. Born and raised in Alor Setar, Kedah, Mahathir excelled at school and became a medical doctor. He became active in the United Malays National Organisation (UMNO), Malaysia’s largest political party, before entering parliament in 1964. He served one term before losing his seat, before falling out with the then Prime Minister, Tunku Abdul Rahman and being expelled from UMNO. When Abdul Rahman resigned, Mahathir re-entered UMNO and parliament, and was promoted to the Cabinet. By 1976, he had risen to Deputy Prime Minister, and in 1981 was sworn in as Prime Minister after the resignation of his predecessor, Hussein Onn. During Mahathir’s tenure as Prime Minister, Malaysia experienced rapid modernisation and economic growth, and his government initiated a series of bold infrastructure projects.

He was a dominant political figure, winning five consecutive general elections and seeing off all of his rivals for the leadership of UMNO. However, his accumulation of power came at the expense of the independence of the judiciary and the traditional powers and privileges of Malaysia’s royalty. He also deployed the controversial Internal Security Act to detain activists, non-mainstream religious figures, and political opponents including his sacked deputy, Anwar Ibrahim. Mahathir’s record of curbing civil liberties and his antagonism to western diplomatic interests and economic policy made his relationships with the likes of the US, Britain and Australia difficult.

As Prime Minister, he was an advocate of third-world development and a prominent international activist for causes such as the anti-apartheid movement in South Africa and the interests of Bosnians in the 1990s Balkans conflict. He remains an active political figure in his retirement, having become a strident critic of his handpicked successor, Abdullah Badawi, and actively supporting Abdullah’s replacement by Najib Razak.

1) Economic modernization and liberalization: During his tenure, largely agricultural Malaysia made an impressive leap into a modern economy based on manufacturing and services. While still clearly not as developed as the West, Malaysia remains the envy of Southeast Asia, perhaps second only to First World Singapore. 2) Navigating the 1997 Asian financial crisis: 1997 was a gravely tumultous period for many Asian nations. Ignoring conventional wisdom and advice from the IMF, Mahathir picked an unconventional path for the nation. The result? Malaysia emerged relatively unscathed and critics, like the IMF and World Bank, acknowledged that his approach worked.

3) The education system: As Education Minister and later Prime Minister, he was the principal architect behind today’s education system. PMR (SRP) and SPM – that was all him. Because of his profound impact on the national syllabus, he basically remains the nation’s headmaster. 4) Multimedia Super Corridor (MSC): Stretching from the Petronas Twin Towers to the Kuala Lumpur International Airport (KLIA), the MSC was an ambitious project aimed at propelling the nation into the digital age. Sure, we Malaysians may still suffer from crappy Internet speeds and unstable connections. But we’re light years ahead of most of the Third World. 5) Petronas Twin Towers: True, Malaysia is more than its famous Twin Towers. But for better or worse, no other national landmark comes as close to embodying the face of Malaysia on the international stage.

A leader is a role model. One who sets positive examples for others. A leader who doesn’t have the motivation, respect, and the right mind-set will not and can not do well in office. it’s the ones who see the world as an optimist who will make great leaders.A leader must also have the determination to achieve and put together a better government. A leader can not be a slacker. He/she must be a person who is “on top of their game.” 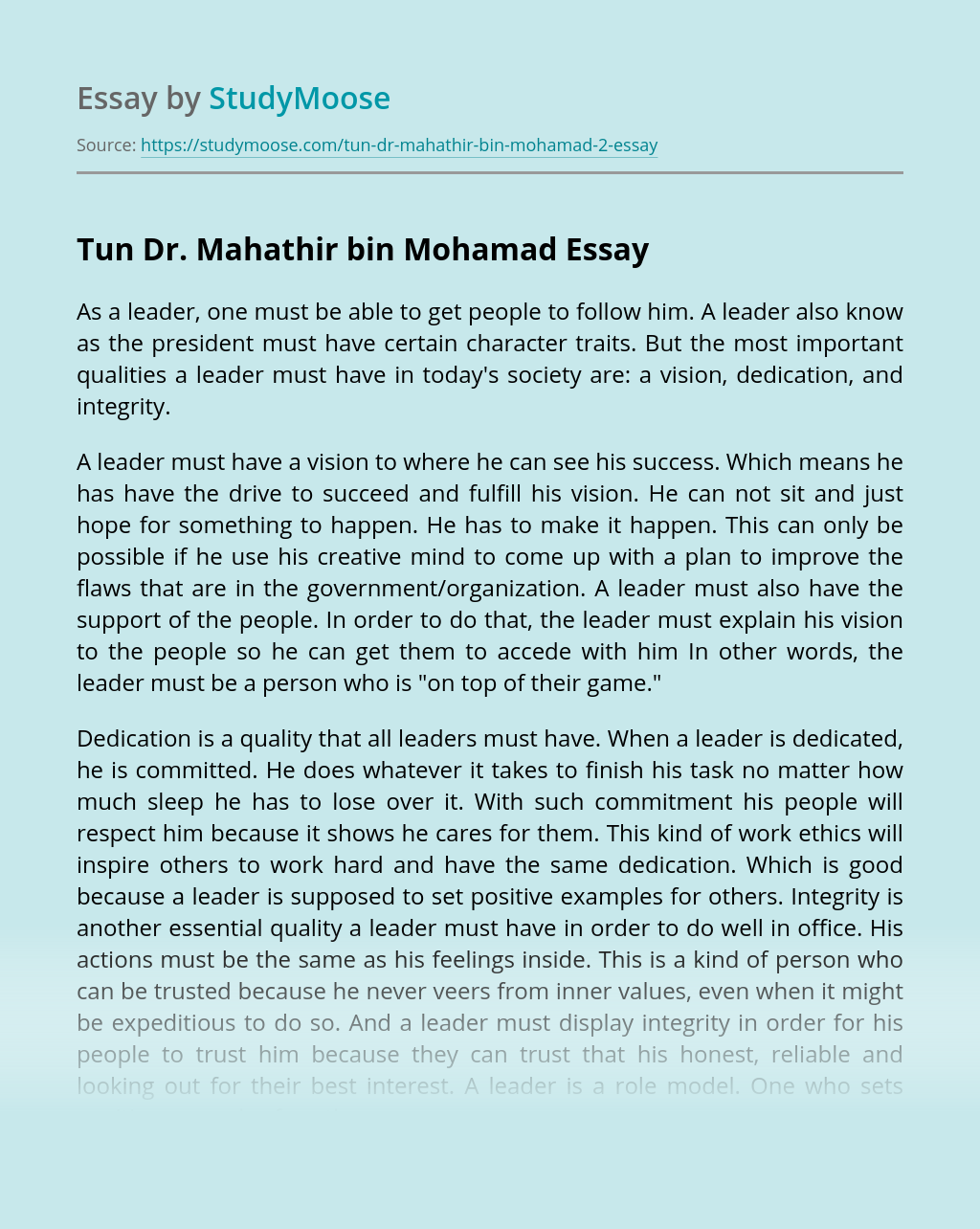 Freedom of speech from the perspective of mass media, to what extend it has been practiced in Malaysia?

Introduction Mass media are means of communications (as newspapers, radio, or television) that is designed to reach the mass of the people1. Besides playing the role to inform individual with news, the media together with a sound legal system and an independent judiciary is part of a triumvirate that is essential for a well-functioning democracy2....

Geographical Location and Climate of Singapore

Singapore is located at the southern sight of Malaysia about 85 miles north of equator. Climates of Singapore As like as other Asian countries Singapore is hot and humid country. Temperature never drops below 20 degree Celsius and highest temperature is 30 to 35 degree Celsius. In November and December is the rainy season, and...

Get Essay
Tolerance Among Malaysian

Malaysia is well-known as a multi racial country that has variety of races such as Malays, Chinese and Indians with many types of religions and its own cultures. What makes Malaysia a unique country is the diversity of the people. 1 Malaysia concept has been introduced by our honoured Prime Minister which is basically to...