Don't use plagiarized sources. Get your custom essay on
“ The Berlin Wall ”
Get custom paper
NEW! smart matching with writer

The history behind the creation and destruction of the Berlin Wall is truly tragic. It was built due to the fact that the relationship between the Soviet Union and the other three Allies was crumbling over different views and once World War II was finally over, it was clearly evident that they weren’t going to be able to resolve their issues. The Allies (Western Germany) wanted to help fix Germany after being conquered and turn it into a democracy, but The Soviet Union (East Germany) disagreed and wanted to make Germany Communist.

Neither side wanted to budge with their views so each side continued life under their completely different controls with the split being within Berlin. While West Germany was prospering, East Germany was falling apart. They could of been compared as night and day from each other. At a certain point, East Germany was losing so many people to West Germany, that in the middle of the night, The Soviet Union built a “rough draft” of the Berlin Wall.

The Berlin Wall was a split between East (Communist) and West (Democratic) Germany, but its destruction was almost as sudden as its creation. (Body)

(Why the Berlin Wall was built)

Before the Wall was built, people from either side could “freely” cross the boundaries every day for work or to just visit, but on August 13, 1961, that all changed. A quote that I found by Peter Galante summarized the day the Wall went up perfectly! “It was like splitting Manhattan down the middle of Fifth Avenue from the Battery to the Bronx; like splitting London with a zigzag line from Barnet to Croydon. . . . If you lived on one side and your office was on the other, you couldn’t go to work. . . . If your mother lived on one side and you lived on the other, you couldn’t go visit her. . . . The aim was simple and brutal: to shut a people in and annex to Communist East Germany what she had not been given by agreement, East Berlin.

Its effect was cruel and horrible. At seven in the morning on the first day, a man went to see his child. Barbed wire, concrete blocks and armed police stood between them. For the people, it produced misery. From the people, it produced fortitude and heroism (Galante, 1965).” There are many reason of why the Berlin Wall built. One reason was due to the fact of economic reasons – too many people were moving from East to West Germany and this was crumbling East Germany faster. The second reason was political – West Germany was prospering and East Germany simply was not. (finish) (Why the Wall caused so much controversy)

It is almost bluntly obvious to why the Berlin Wall caused so much controversy among the citizens of both East and West Germany. When the Wall first went up, it abruptly separated entire families, kept people from their jobs, and just basically tore people’s lives apart. No matter what they tried to do, they weren’t able to get through the boarders without some kind of conscience happening – being shot or attacked. People from East Germany tried to apply for visa’s to travel to West Germany and were regularly denied. Little by little, with the communist rule of East Germany locking its people within the city, people slowly but surely became frustrated and upset, which they had every right to be. (talk about different things people did to try and escape from East Germany) (Why is came down)

(What was the aftershock of the wall coming down)

(What is the significance of this event to today’s society) For almost 30 years, the sections of that Berlin Wall that still remain were the iron and concrete embodiment of the symbolic Iron Curtain between western democracies and the Communist world of the Soviet Union. I don’t know if the wall itself has any impact today other than as a reminder of how bad things were in Eastern Europe in the early 1960’s until the end of Communism there in the late 80’s and early 90’s. However, today we think of international terrorism, usually from the Middle East as the major threat, but when it was built by the Soviets and East Germans in August, 1961, the fear of Communism and nuclear war was as strong as the fear of Islamic terrorists, today, maybe stronger. (help?) (Conclusion)

Today, although there is barely anything left of the Berlin Wall besides what is left as memorials of that horrible event, the scares of those 28 years are still “fresh” to those who had to go through or even witness that kind of torture. It is hard for us to truly imagine what life was like during that time. Having your town, city, state split straight down the middle, separated from friends, families, and loved ones for years by concrete and iron, and not being able to see them – that is truly unimaginable. I know I can’t imagine being separated from my family and knowing that if I “tried” to get passed that wall to see them, that I would either be shot, attacked by dogs, or something else, is scary. (need help finishing this) 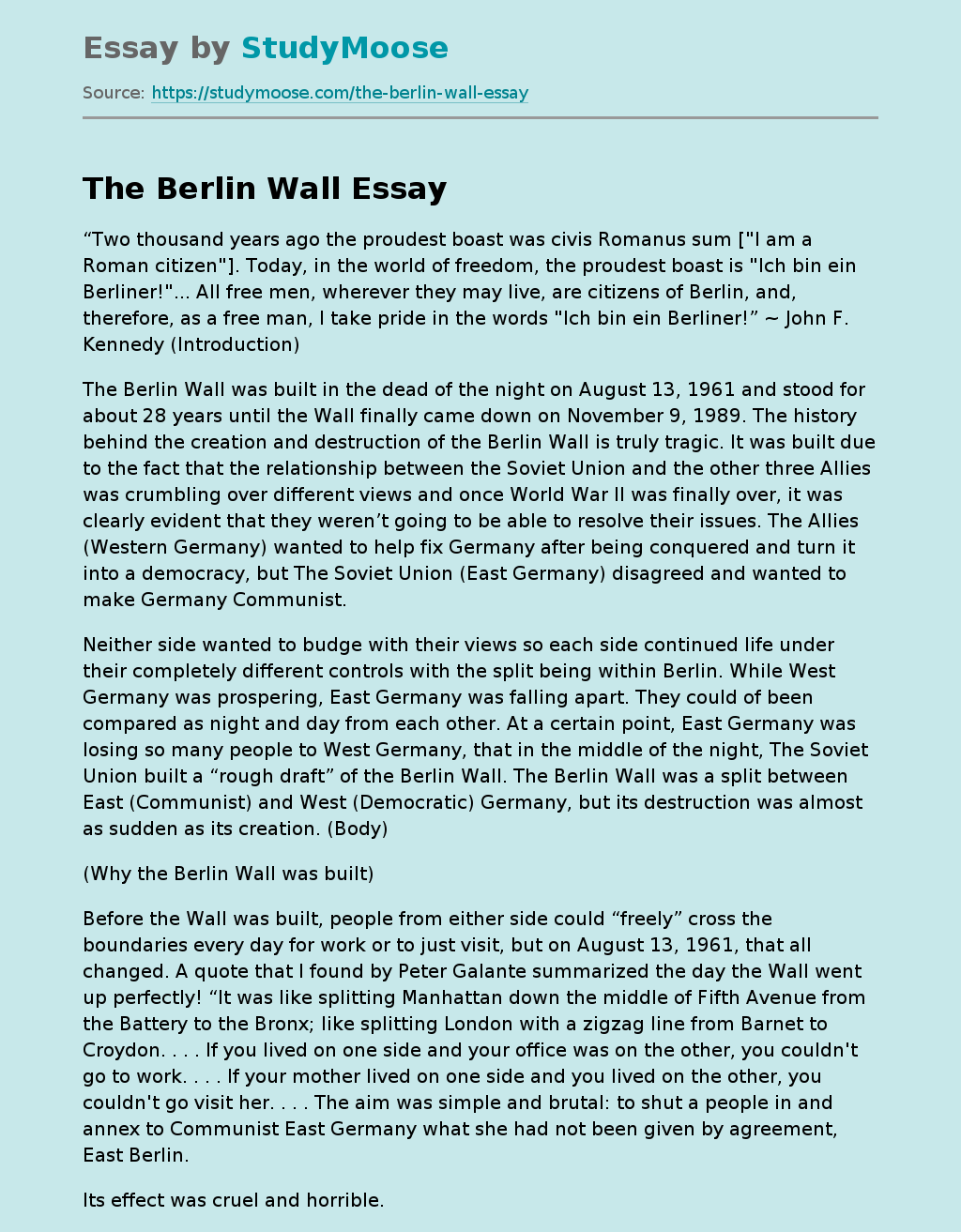