The moment of inertia I is a measure of the resistance of a body to angular acceleration [1]. An important factor as the resulting moment governs the analysis of rotational dynamics with an equation of the form M=I∝ which defines a relationship between several properties including angular acceleration and torque [2]. The polar moment of inertia is the measure of a body’s resistance to torsion and is used to calculate the angular displacement and periodic time of the body under simple harmonic motion [3].

The moment of inertia of any mechanical component that will encounter rotational motion must be analysed as part of the design phase.

From the complex assembly of a steam turbine to the simplicity of a flywheel, the periodic time for a component can be compared with other prototypes in order to find the most efficient assembly before going into production. The trifilar suspension is an assembly that is used to determine the moment of inertia of a body about an axis passing through the body’s mass centre, perpendicular to the plane of motion [4].

Loading the assembly with various objects and with an understanding of the parallel axis theorem, it is possible to determine the total moment of inertia for the entire assembly.

The moment of inertia of a solid object is obtained by integrating the second moment of mass about a particular axis. The general formula for inertia is: Ig=mk2
WhereIg = inertia in Kgm2 about the mass centre
m = mass in Kg
k = radius of gyration about the mass centre in m
In order to calculate the inertia of an assembly, the local inertia Ig needs to be increased by an amount mh2 Wherem = local mass in Kgh = the distance between parallel axis passing through the local mass centre and the mass centre for the overall assembly The Parallel Axis Theory has to be applied to every component of the assembly.

The polar moments of inertia for some standard solids are:
Cylindrical solid| ICylinder= mr22 (r : radius of cylinder)| Circular tube| ITube= m2(ro2+ ri2) (ri and ro : inside and outside radius)| Square hollow section| ISquare= m6(ao2+ ai2) (ai and ao : inside and outside length)| Table 1: Polar moment of inertia for some standard solids

An assembly of three solid masses on a circular platform is suspended from three chains to form a trifilar suspension. For small oscillations about a vertical axis, the periodic time is related to the Moment of Inertia. Ø600

From Figure 1, ϴ is the angle between the radius of the circular platform R and the tangential reference line x sinϴ=xR
Since ϴ is very small sinϴ= ϴ = tanϴ so ϴ= xL (1)

Figure 2: Free body diagram
tanϴ=ϴ= Fmg (2)
Substituting equation (1) into (2) and rearranging for the force F F= mgxL (3)
Understanding the standard equation for torque, FR=I∝
Wherex=Rϴ
∝ = d2ϴdt2
-mgϴR2L=Id2ϴdt2 (4)
The equation of motion for figure 1 is:
Id2ϴdt2+ mgR2Lϴ=0 (5)
Comparing this to the standard equation (2nd order differential equation) for Simple Harmonic Motion d2ydx2+ ω2y=0, the frequency ω in radians/sec and the period T in seconds can be calculated. Assuming the general solution for equation (5) is ϴ= ϴsin(ωt) dϴdt= ϴωcos(ωt)

And
d2ϴdt2= -ϴω2sin(ωt)
So equation (5) can be written and rearranged to derive an equation for the frequency ω ω= mgR2LI (6)
From the angular frequency equation ω=2πf= 2πT, we can substitute equation (6) for ω and calculate the period T in seconds T=2πLImgR2 (7)

The trifilar suspension is a piece of apparatus that consists of a circular platform that is suspended by chains from a hanger.

A wooden metre stick was used to measure the length of the chains and the radius of each solid object from the centre of the platform – accuracy ± 1mm. Stop watch – accuracy ± 0.01s.

The trifilar suspension was assembled and the lengths of the chains were measured, recording their average length. In order to repeat the experiment, applying the same amount of force each time, a tangential reference line was drawn on the circular platform and marked with a corresponding point on the table. At first, the period for five oscillations of an empty platform was recorded and repeated, noting the average time taken for one oscillation. The platform was then assembled scattering the solid objects and noting their radius from the centre of the platform. Once again the period for five oscillations was recorded, repeating step 1 and the average time taken for one oscillation noted. Finally the solid objects were placed directly in the centre of the platform, stacked on top of each other and the subsequent period for one oscillation noted.

The moment of inertia is defined as the integral of the “second moment” about a chosen axis [5]. The trifilar suspension incorporates this factor, calculating the polar moment of inertia of an assembly about the vertical axis z with the use of the parallel axis theorem. For small oscillations about a vertical axis, the periodic time is related to the moment of inertia so an accurate comparison of the relationship between experimental/theoretical time and the ratio of Im can be explored.

Figure 6: Theoretical time vs. Im
Both figure 5 and 6 highlight a linear relationship, identifying that the ratio between Im and time are directly proportional to each other. The results from figure 5 do indicate some minor experimental error, justified as the gradient of the line decreases slightly and from the error analysis between the experimental and theoretical values for periodic time.

Experimental Period (s)| Theoretical Period (s)| Percentage Error %| 1.94| 1.97| 1.5|
1.39| 1.49| 6.7|
0.88| 0.9| 2.22|
Table 4: Error analysis between experimental and theoretical results Sources of experimental error:
1. Although the accuracy of the stopwatch is to ± 0.01s due to the reaction time under human operation, this accuracy is reduced to roughly ± 0.30s. 2. The torque force applied to the trifilar suspension was not exactly according to the tangential reference line, implying an inconsistent force was applied. 3. The apparatus may not have been completely level due to the individual chain length and as a result, the torque applied will not have been a pure force component, perpendicular to the axis of rotation. 4. The average period for 5 oscillations was taken but not every oscillation reached the tangential reference line as the system lost momentum due to the moment of inertia of the assembly and frictional forces.

The trifilar suspension proves the relationship between the polar moment of inertia and the equation for periodic time as derived from the simple harmonic motion of the assembly. The experiment concluded that the time period for both experimental and theoretical approaches were directly proportional to the ratio of Im taking into consideration minor experimental errors. 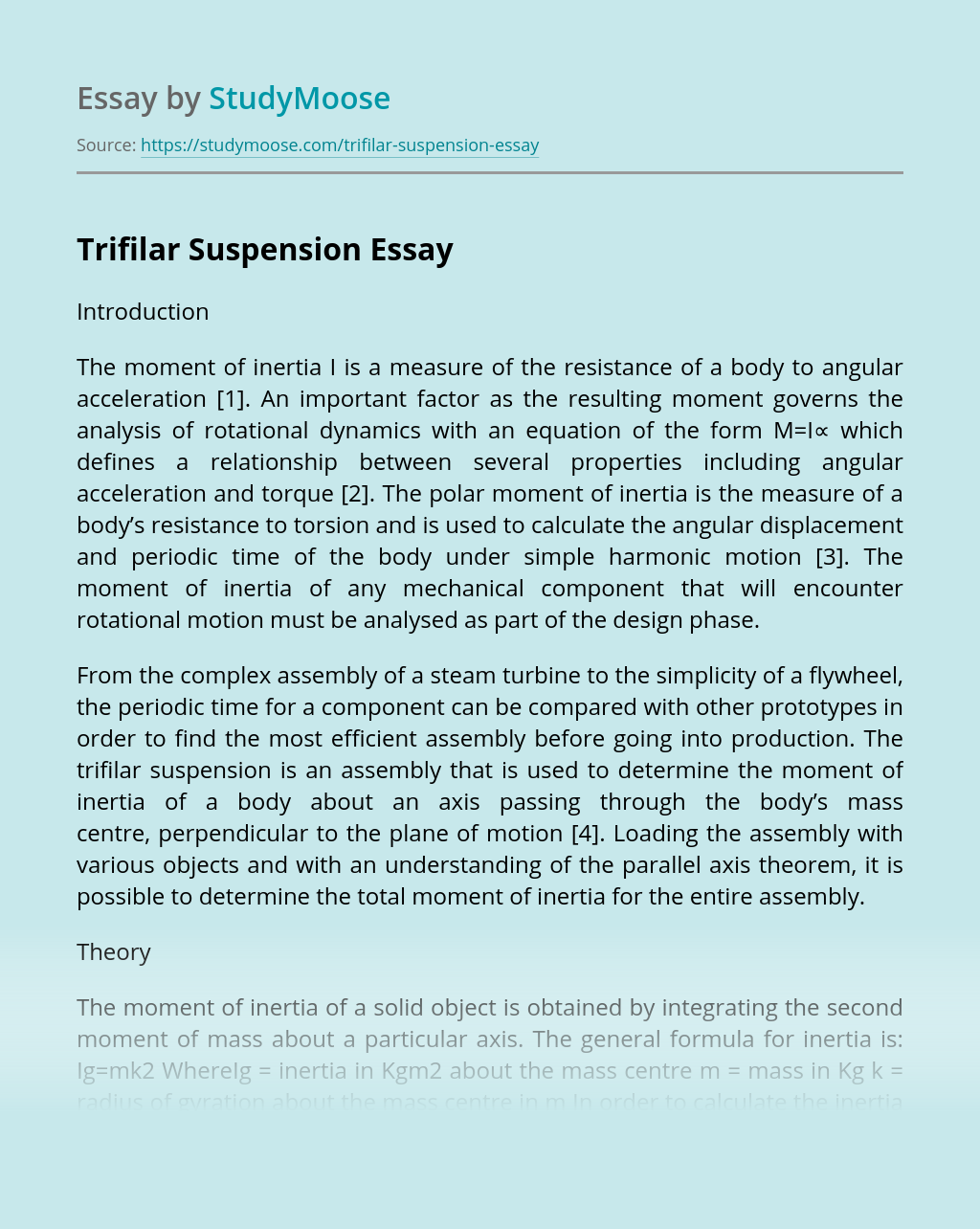