With the relocation of the colonial capital to Auckland, the increased prices of goods and the course of trade reduced, many chiefs suffered economically. The Crown was held from their exclusive right of land purchase to satisfy the northern chiefs who didn’t want any restrictions on who they dealt with. The Pakeha and the Maori both had different interpretations of what the treaty meant which led to disagreements and confusion. When the government got involved with Maori affairs, many Maori chiefs and tribes became upset.

Don't use plagiarized sources. Get your custom essay on
“ Treaty of Waitangi: British Colonial History ”
Get custom paper
NEW! smart matching with writer

Hone Heke and Te Ruki Kawiti began to rebel again the British, writing letters however as that did not stop the British interfering, they cut down the British flag pole to make a stronger point. Hone Heke did this three times before Governor Fitzroy placed soldiers around the area. Some Maori aided the British troops as fighting broke out between the British and the Maori. Heke’s action threatened the basis of FitzRoy’s authority and settlers urged him to take a firmer stand with the Maori.

Heke allied with Kawiti so they could have a stronger force.

The flagpole in Russell was cut down four times between 1844 and 1845 as a consequence of the British settling there and as Heke saw it as a symbol that Maori had lost their status and the British ruled the country. This was a way to get a strong point across to Pakeha without affecting settlers or the economy. Heke ordered Te Haratua to cut the flagstaff down as he did not want to break his promise with Henry Williams.

FitzRoy sent troops from New South Wales and set up a meeting with Maori chiefs. Heke did not go but the other chiefs promised to keep an eye on him in return for the meaning to be removed of his actions.

FitzRoy agreed and removed customs duties for all ports, replacing it with a property tax. The flag was put back up and the troops sent back. Heke called for united action as tribesmen began attacks. Heke gave Kawiti a greenstone smeared with his faeces to represent what the Maori felt they were being treated like. The township was burnt down and looted, leaving only the churches to remain the same and residents were evacuated to Auckland. In January an announcement was made in both languages offering a reward for Hone Heke’s arrest. Maori defensive enabled them to beat the British troops, making them victorious as the British withdrew.

In 1845 British troops and their Maori allies fought against Maori. The British were victorious and the Maori accepted the fact that the British has authority in Aotearoa. In 1846, the British government instructed that all Maori landownership was to be registered; land deemed to be unused or surplus was to become Crown land. Bases were essential for water and other supplies on dry land. Whalers favoured the shores of the Bay of Islands as they were warm and lush. Maori use of firearms in tribal battles resulted in many more deaths. This along with the whalers’ indulgences brought pressure for an extension of British government.

France’s interest in the country added an incentive, leading to the appointment of a resident, James Busby. He was quite powerless to make improvement in the state of affairs. Captain William Hobson was appointed for stronger actions. He introduced and finalised the Treaty of Waitangi with as many Maori chiefs that could persuade to sign. No one’s land would be secure unless it received Crown’s agreement. British reports were very biased and made it seem like they had taken on a much bigger battle, multiplying the amount of Maori warriors, wounds and deaths. The British command was blamed for total inability to do something successfully. 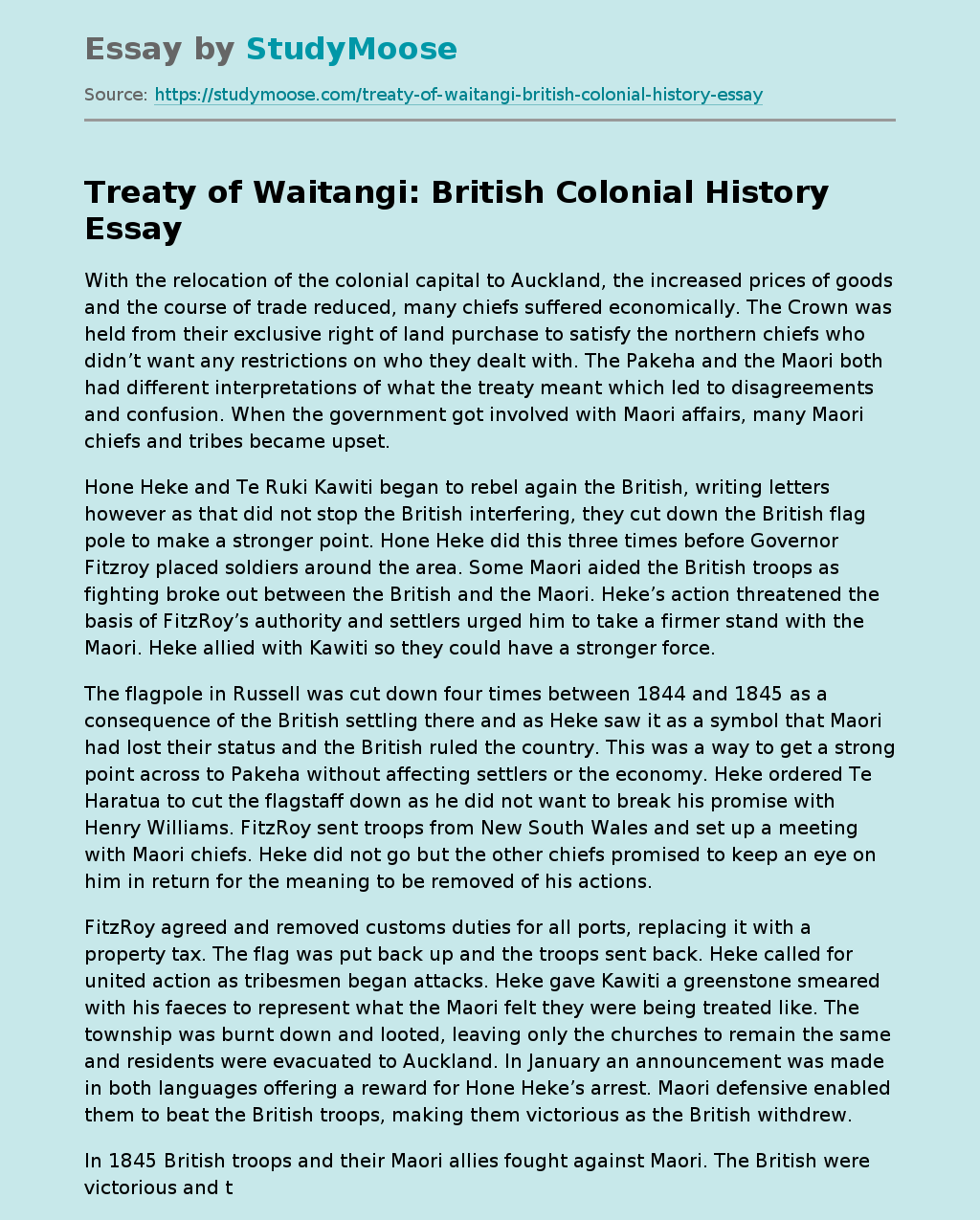