Power In To Kill a Mockingbird

As a child progresses in their life, they learn proper behavior; most of which is learned through mistakes. For example, if a child participates in an immoral act, such as swearing, a parent could yell at that child and punish them for cursing. By punishing a child for doing something wrong, the child realizes they made a mistake, and will be less likely to make the same mistake in the future. However, if the parent had not yelled at the child, the child would not know any better and most likely continue cursing.

Don't use plagiarized sources. Get your custom essay on
“ Power In To Kill a Mockingbird ”
Get custom paper
NEW! smart matching with writer

The method of a child learning by mistakes is very effective in any situation, and instead of fearing mistakes, children can learn to embrace errors and move forward with maturity, success and wisdom. Power In To Kill a Mockingbird, by Harper Lee, Jem and Scout Finch learn many lessons about appropriate behavior, such as don’t judge people by your own standards, especially when you are more privileged than they are, it is wrong to harm things that don’t harm you, and show courtesty and respect to others always…don’t let others get to you.

Firstly, Scout and Jem Finch learn the following lesson: don’t judge people by your own standards, especially when you are more privileged than they are. In Maycomb County, many people were poorer than the Finch’s were. For example, a specific family, the Cunningham’s, were known all around Maycomb for being one of the lowliest families. When Walter, one of the Cunningham children, went over to the Finch’s house for dinner one afternoon, he began pouring molasses all over his food.

Pouring the hot syrupy mixture on food must have been a custom in the Cunningham family, but Scout, however, thought it was disgusting. In front of everyone at the dinner table, including her father and Calpurnia, their maid, Scout began to protest the fact that he had drowned his dinner in syrup, and that it was highly repulsive. Upon hearing Scout’s blatant distaste, Calpurnia pulled Scout into the kitchen to yell at her. Calpurnia told Scout that when they have company, she must be respectful of their ways, since not everyone eats like they do.

When Scout protested that Walter was not company, he was “just a Cunningham,” Calpurnia said, “‘Hush your mouth! Don’t matter who they are, anybody sets foot in this house’s yo’ comp’ny, and don’t you let me catch you remarkin’ on their ways like you was so high and mighty! Yo’ folks might be better’n the Cunninghams but it don’t count for nothin’ the way you’re disgracin’ ’em-if you can’t act fit to eat at the table you can just set here and eat in the kitchen! ’” With that, she sent Scout back into the kitchen, but not before a memorable smack on the head.

Having Calpurnia scold and hit Scout caused her to learn the necessary lesson in a brutal, yet efficient way. Had Calpurnia not punished Scout, the lesson would not have been learned and Scout would probably have continued to believe that if she was socially above someone, she had every right to make them feel low. The lesson that you cannot judge people by your own standards, especially when you are more privileged than they are, is important for the Finch children to learn considering the upcoming Tom Robinson trial.

Tom Robinson is a black male, living in the 1930’s. The 1930’s was when The Great Depression occurred, and was also a time of much prejudicing against black people. The lesson relates to the fact that white people in that time did not understand the ways of black people, and just because they had different customs, white people considered them lower, and did not hesitate to make them feel it. White people thought they were more superior to blacks, but Jem and Scout needed to know that they should still be treated the same.

The lesson Scout learned with Walter Cunningham helped her understand that just because someone may do something differently than her, does not mean it is necessarily wrong or revolting. Therefore, Scout and Jem successfully learn the lesson: don’t judge people by your own standards, especially when you are more privileged than they are. Secondly, another lesson learned by Scout and Jem was the following: It is wrong to harm things that don’t harm you. In the book, Atticus buys Scout and Jem a rifle for Christmas.

Immediately, Jem wanted to try shooting at the birds in the yard. In return, Atticus said, “I’d rather you shot at tin cans in the back yard, but I know you’ll go after birds. Shoot all the bluejays you want, if you can hit ’em, but remember it’s a sin to kill a mockingbird. ” Jem had never heard his father talk about anything to do with religion and sinning until then, thus he was curious. When he asked Miss Maudie about it, she said, “‘Your father’s right,’” she said. “‘Mockingbirds don’t do one thing but make music for us to enjoy.

They don’t eat up people’s gardens, don’t nest in corneribs, they don’t do one thing but sing their hearts out for us. That’s why it’s a sin to kill a mockingbird. ’” Miss Maudie explains that since mockingbirds do not do anything wrong, and they just bring enjoyment to people, they should not be killed. It relates to the lesson Jem just learned that it is wrong to harm things that don’t harm you. Mockingbirds do no harm to anyone, so why would anyone ever think of harming them in return?

The lesson is important in regard to the Tom Robinson trial as well. Oftentimes back in the 1930s, black people would not do anything to harm anyone in any way, yet regardless, white people still lashed out and harmed them. The lesson with the mockingbird is another step in Scout and Jem learning that black people really did nothing wrong to deserve the place they were thrown into during that time, yet white people still hated and hurt them anyway. Thus, Scout and Jem learn the lesson that it is wrong to harm things that don’t harm you.

Power In To Kill a Mockingbird. (2020, Jun 02). Retrieved from https://studymoose.com/to-kill-a-mockingbird-new-essay 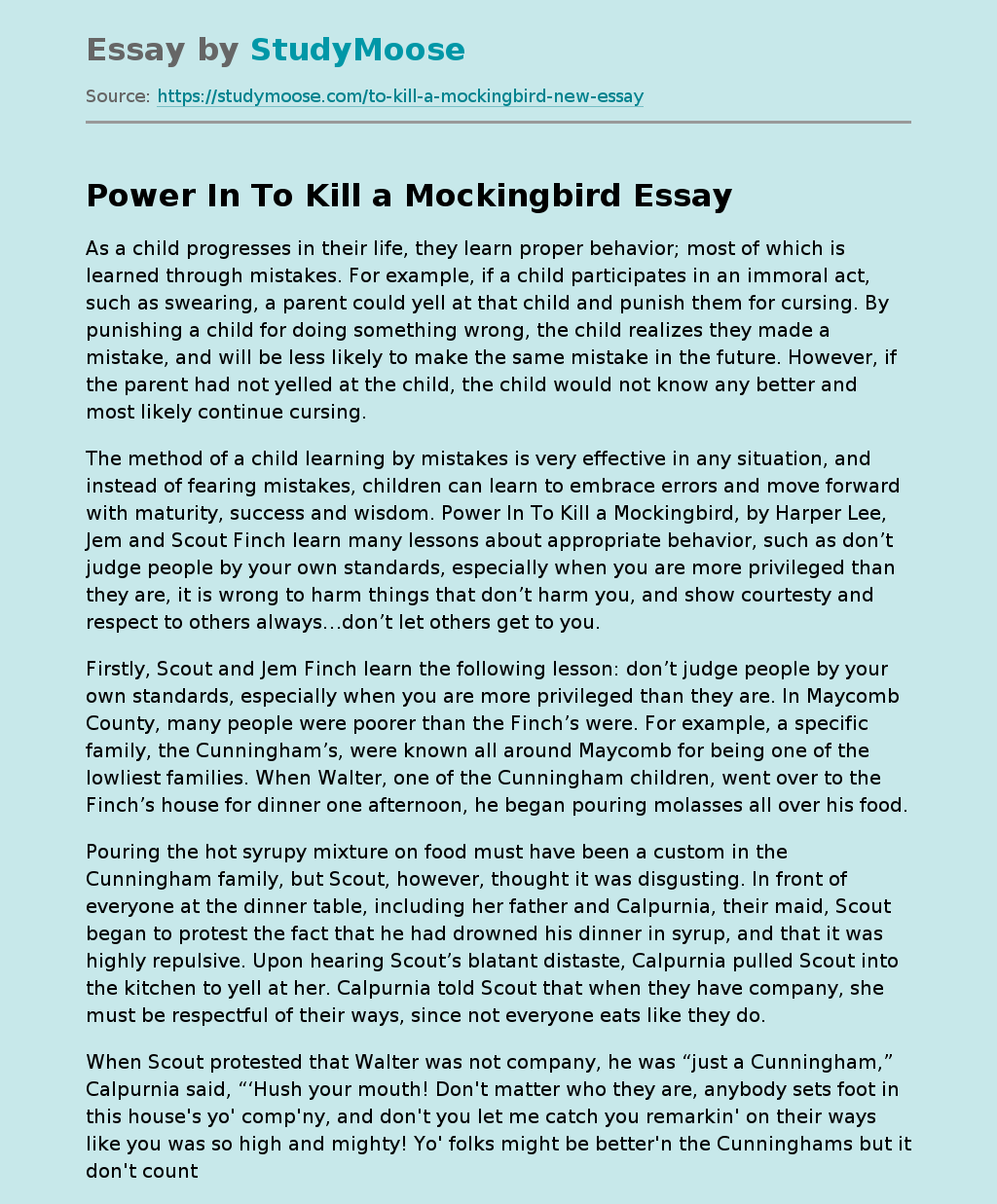