Tiger’s Real Name: Eldrick Woods. The nick-name “Tiger” was given to him by his father. It’s the same nick-name of a South Vietnamese combat buddy, Nguyen Phong, who saved Tiger’s father’s life a few times in the Vietnam War.

Don't use plagiarized sources. Get your custom essay on
“ Tiger Woods ”
Get custom paper
NEW! smart matching with writer

Rumor had it that Tiger was planning to official change his name to Tiger Woods when he turned 21 this past December but sources say he didn’t do it for some reason.

Tiger Born: December 30, 1975 Long Beach, California. Tiger now lives in a new home in Isleworth, Florida. Near the west side of Orlando. Tiger moved to Florida because of the great golf weather and because he is always flying and time zone changes tired him out as he alway lost time when having to fly back to California.

Tiger’s Religion: Tiger believes in Buddism. Not every aspect, but most of it. Tiger was 11-months old when he first started swinging a sawed off golf club in his garage. Some sources say he was actually 10-months old.

Tiger’s Education: In the 7th grade Tiger had a GPA of 3.86! (Now there’s the real important stuff.) Tiger spent 2 years at Stanford University in California majoring in Business.

Tiger has 2 half brothers and 1 half sister from his fathers first marriage. Tiger loves McDonalds (CheeseBurgers) and Taco Bell.

Tiger’s Caddy (Guy who carries Tiger’s clubs for him): Mike “Fluff” Cowan, used to caddy for another pro, Peter Jacobsen. Tiger’s Driver (Big Golf Club) is only 43-inches long, an inch shorter than most clubs used by other professionals. Tiger’s Driver Club head is moving at an average speed of 122 mph at impact with the ball. Tiger uses a soft-covered three piece golf ball. My source says he uses the Titleist Pro 100. Others say he also uses the Titleist Pro 90. Tiger has a 35-inch sleeve length. (I know everything!) Tiger has a 28-inch waist size. (He’s much stronger than he looks!) Tiger’s Golf Coach: Butch Harmon Tiger’s Agent: Hughes Norton of International Management Group Most Recent Award: ESPY (ESPN) Award “Breakthrough Athlete of the Year” Tiger is working on 2 golf books with Warner-Books he’s getting paid $2.2 Million for them. Tiger’s first professional win was the 1996 Las Vegas Invitational. He won $297,000. Tiger’s Girlfriend: NONE. Actually, rumor has it that Tyra Banks (The SuperModel) is interested in him. It’s was rumored that Kelli Kuehne (Great young female golfer that Tiger played with at the JCPenney Classic) might be in the running but I’ve been told that she just got engaged to someone else. Tiger continues to suggest that he wants to stay single though. Tiger Woods is Michael Jordan’s hero! This is a quote from Michael Jordan that is taken from the book Tiger Woods ‘The Makings of a Champion’, by Tim Rosaforte. “I admire [Tiger] for what he’s done thus far because for so long it was truly a game that a lot of minorities couldn’t play …so in that sense he’s carrying an extra burden along with him, to succeed and expand across all racial barriers.” To this quote author Tim Rosaforte added, “I admire him, too, for establishing a new plateau, a higher ground, if you will. I really do believe he was put here for a bigger reason than just to play golf. I don’t think that he is a god, but I do believe that he was sent by One.” 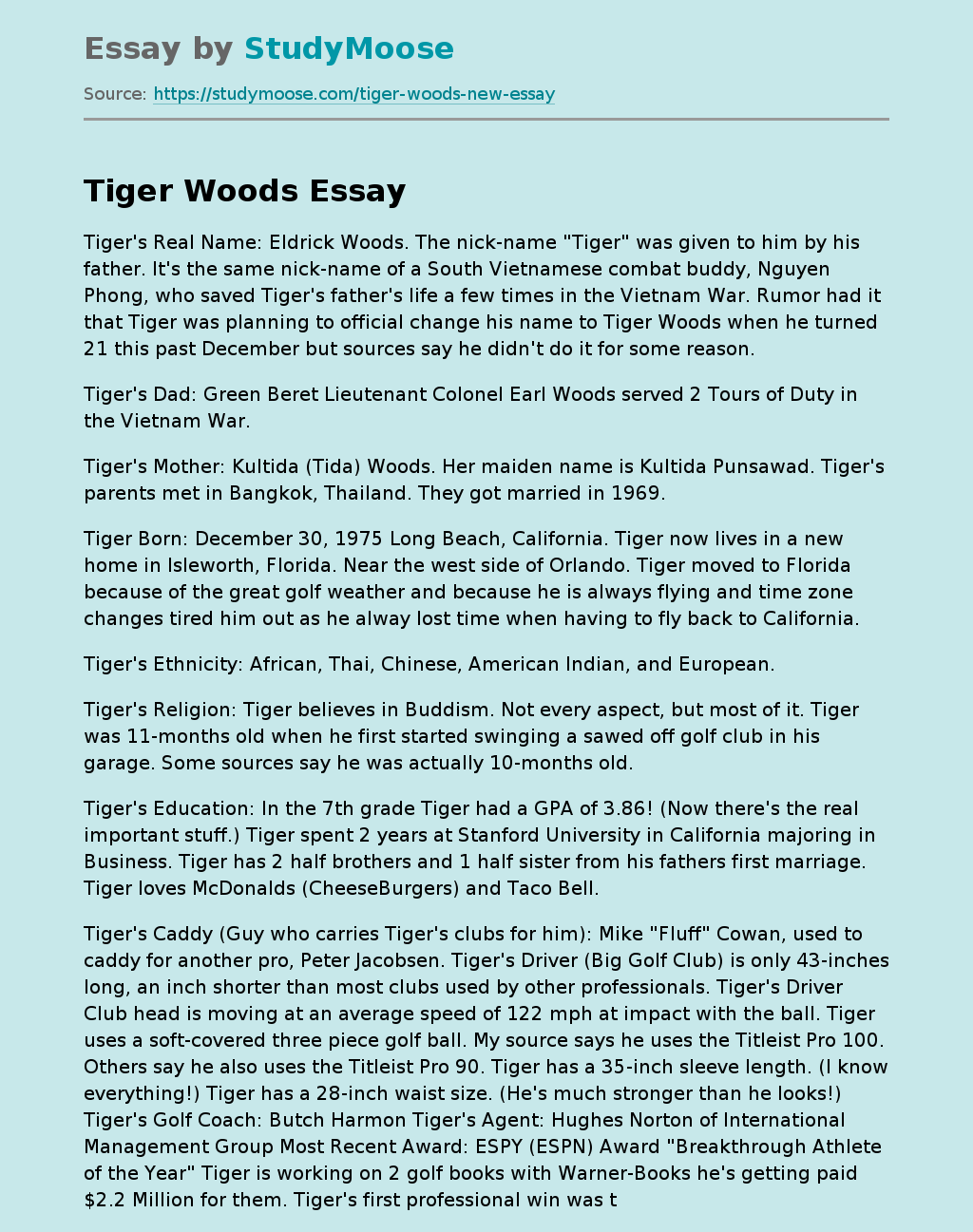