Achebe in “Things Fall Apart” narrates the colonialism era of Nigeria that started from British invasion and their extensive administration all over the country. The novel has the widespread coverage over the collision of two cultures. The story revolves around a wealthy farmer Okonkwo in an Ibo Village and his achievements. He has many hobbies, ambitions and goals. He’s also a great wrestler, member of egwugwu, and very popular among the village. Achebe describes the events in the late 19th century occurring in that village.

Don't use plagiarized sources. Get your custom essay on
“ When Things Fall Apart ”
Get custom paper
NEW! smart matching with writer

“The conflict of the novel, vested in Okokwo, derives from the series of crushing blows which are leveled at traditional values by an alien and more powerful culture causing, in the end, the traditional society to fall apart,” G. D. Killam. The conflict that arose between the two cultures after colonialism caused much frustration and un-satisfaction. Okonkwo was unable to adjust in this situation. He kills one of the Africans employed by British company and then kills himself.

Okonkwo is an old powerful man from Nigeria; he is very strong person and resembled more like wartime soldier.

He was stable in his believes and never converted to Christianity as other did when British rule became widespread in their village. When he found that his village was excessively westernized he wasn’t able to adjust. He never wanted to live a kind of slavery for other people. He’s a very tough gentleman and hardworking and has a lot of respect among his villagers. In the novel, “Things fall apart” Achebe portrays many views of a village life and the cultural aspects.

“In Things Fall Apart, Achebe carefully makes the readers aware that the traditional Igbo culture that Okonkwo claims to represent varied from clan to clan and was very dynamic. Okonkwo’s flaw is his rigidity. Achebe is critical of any culture that is stagnant. .. Achebe’s achievement in fact was that he communicated meaningfully both with his Western readers, who were for the most part ignorant of the material he was handling, and with those who knew it very intimately.. ” (MonkeyNotes) Achebe easily created a communication bridge between the two contrasting cultures to inform both of them their values.

His point of focus is that each culture has its own identity and each culture is unique. We’ve to value other’s culture, ethnic and religious background. If we’ll try to impose our egos on others then it will only create hatred and distraction. “The story of Okonkwo and the Ibo people of Nigeria is the story of British colonization and the collapse of the indigenous culture. The first to arrive were the missionaries, who appear to the village outcasts as having a superior faith. ” (Things Fall apart) The message novelist gives is that whatever status we have in the society we cannot impose our will or our egos on others.

If we want to do something for others then it must be for the general interest of the society and the people. It must be for humanity. We cannot impose our own thoughts, reflections and egos on others. Clash among different cultures is due to the same fact. After reading this novel one can get a clear idea about the life of Nigerians specifically and Africans in generally. The novel gives us the complete picture of the life from which these Africans were passing through when British administration was widespread in the area.

However, in his writing there is a lot of irrelevant stuff like unnecessary scenes. Okonkow, the main character, beats his wife and kids in much frustration when he sees them adopting westernized culture. According to Killam “in showing Ibo society before and after the coming of the white man he avoids the temptation to present the past as idealized and the present as ugly and unsatisfactory. ” The novel depicts the European imperialism and the cultural aspects between the two contrasting civilizations. The striking disparity between the two resulted in the inevitable cultural shock.

“Chinua Achebe (1930- ), Nigerian novelist and poet, transports the reader into the African culture with unsentimental abruptness as the tragic, satirical, and ironical give way to a vivid articulation of the traditions and speech of the Ibo people. ”(Blasen, 2003) Tragic consequences of collision of two cultures made the prevalent condition in the society of Ibo land satirical and ironic. This was written in response to some British authors to give them how Africans view imperialism. The cultural differences posed many problems for the Africans to absorb.

The use of language is shown as one of the cultural dissemination. The downfall of African culture occurred when Europeans take over the entire Africans. Author mentions that African culture was rich but it was threatened after European rule spread there. African culture came in danger when Christian missionaries established over there and Christianity started to spread. The traditional African culture and European culture collided and still had a separate identity. Ethnic values of Africans were quite different from Europeans.

Christianity, a new religion for them was unacceptable. Achebe’s ability to use language is flawless in transcribing the cultural values and differences that separated them inimitably (Rao). The language they adopted was a new kind of African English with a different accent. The Ibo land ethnic, cultural and aesthetic values were well defined and stood apart from English culture. He describes the pains and the dilemma African culture faced. “The African culture is described as savage while European culture as civilization. ” (Blasen, 2003)

Achebe gave a different view of African culture, a totally different view from novels of British authors who always see Africans as uncivilized society and backward culture. “Chinua Achebe provides a remarkably alternative view of African culture for which modern society may feel proud of and maybe even regretful for destroying. Certainly Achebe has succeeded in tearing down the Western concept of “civilization” and “savagery” and in its place he presents us with the very real human world behind the brush along the river. ” (Blasen, 2003)

Achebe’s goal is to have respect and arrogance for the Blacks. He did not want to see that Africans are always spotted as uncivilized society. However, there was an absolute alienation and contradiction between the two cultures that was marked in this novel. His character, Okonkow was mentally disturbed when his son converts to Christianity and joins European missionaries. After his exile when he returned home he saw much devastation and exploitation of African culture at the hands of Europeans. The westernization of Ibo village produced disintegration between the two.

The suicide of Okonkow show his personal alienation and disturbed mental condition that caused things fall apart. Whole novel revolves around the fact that Africans suffered at the hands of these Europeans. It was the reaction of collision of two contrasting civilizations. As cultural shock can be defined, “Culture shock is the reaction one faces when confronted with a new cultural environment; the effect of going from culture into another. By the time you begin orienting yourself, you could be experiencing the first signs of culture shock. “(Cultural Shock) 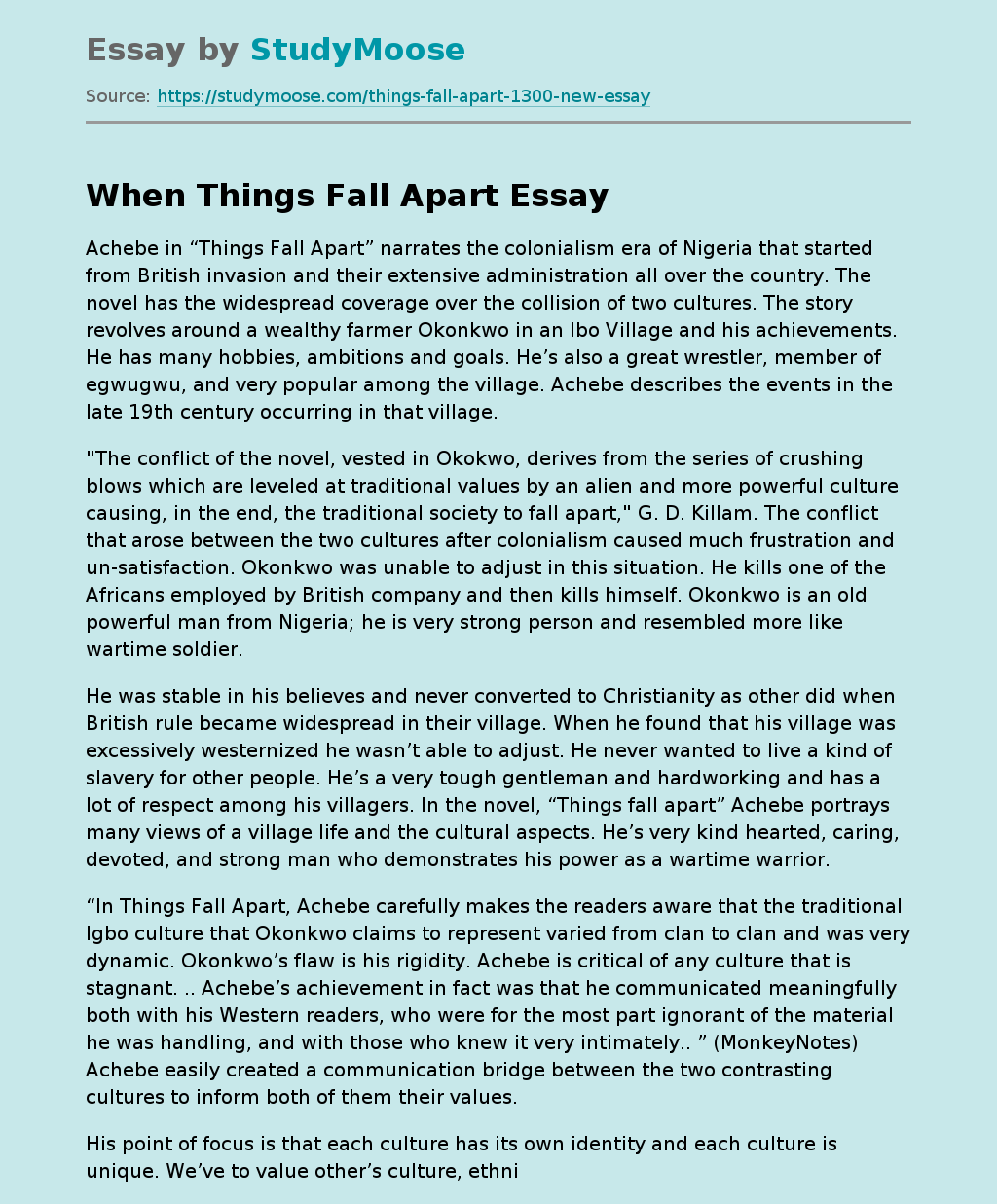