961 Beer, the first craft brewing company has been the epitome for start-ups on how to enter the then-monopolized market under the most adverse conditions. While in UAE, as the CEO of RAK, Mazen Hajjar met Henrik and explored the possibilities of this Lebanese beer. In early 2006, Hajjar called the quit and returned to Beirut for the entrepreneurial venture. From overcoming the political instability to be up against Almara, the Lebanese market dominator, 961 created its Point of Difference by striking on the Lebanese touch chord.

961 is Lebanon’s country code and usage of predominantly Lebanese resources in the production process.

Marketing was done through social media and interactions were established with customers rather than just broadcast messages. The Facebook group garnered about 1300 members. In 2007, the bar was set up in Beirut’s Gemmayzeh district, the idea behind being to introduce beer varieties to keep people excited. Word-of-mouth was vital, grabbed the attention of local and international media. Each new beer was additive to sales than cannibalizing the existing product-line.

But pricing was challenging, cost price of $13.6 to $12.5 market price.In February 2009, the capacity limits were reached which amplified the need of a strong future strategy.

Sales has started picking up and in February 2009, it has reached its annual production limit of 288,000 bottles.To keep up the pace, 961 Beer had to manage limited production capacities and resources. Stiff competition had led to undermining its own business as other bars are reluctant to stock and sell 961 Beers.

The consistent political trouble is hampering the business too.

961 Beer is at the crossroads, posed with the option to consolidate or grow.

It can go for consolidating the business of the Beirut bar.Working on optimizing the production and operations is crucial to growing demand.To expand their business across Lebanon is what 961 Beer can also look at.Also, if the political turmoil continues to haunt, then venturing inti the International market is the go for option.

The criteria on the basis of which the analysis has to be carried out is would be holding on to 961’s value and label through the slogan of “change” and maintaining the brewing standards without compromising those values.Scaling up the production incorporating technological advancements and hiring professionals for the same.Capital Investment is required at the start to set the foundation well.Timeline to accomplish the target has to be precise to not overdo on effort.Also, the reach across Lebanon could be scrutinized to reach the optimal level.Business security from political fragility is of concern as we look into the long term perspective.

When the company has to look into consolidating the business of the Beirut bar, the prime concern is being able to stick to quality and meet the growing demands of the region. It offers variety and elaborate yet simplified spread on the menu. The focus is set here and the process can be carried out by less of capital and ensure a faster implementation of the plan. But the pricing still remains a concern if variants have to be kept intact and country turmoil continues to affect business.

The most revenue bleeding in the unit can be stopped by optimizing the operations. This can be best done by hiring professionals who can make desirable changes to the production unit to bring the unit cost of craft beer down and reversed the profit profile and meet the growing demands simultaneously. This option gives it all that will stabilize the foundation platform but then the external environment still remains intact in hampering business.

If we decide to capture the Lebanese market, we get to address larger mass but then we fail to address the cost issue and the even greater demand that may pour in. The political condition is unfavorable across the region which leads to unresolved problem statement. Also, a huge investment with respect to all the bars and restaurants establishment costs that the company has to incur along with the risks for failure too.The timeline may get extended too.

Going for the International market would be the best option if the difficulties with regards to politics does not get resolved and the company loses the Lebanese market.Though the problems of pricing is not looked into, the reach to the mass and popularity is leveraged.But licensing and trade issues may arise. The pricing issue persists.

I recommend optimizing operations as it addresses 916’s need of the hour to scale up capacity.A balance between production levels and investment has to be made so as to be at par with the competition and demand simultaneously.Costing has to be dragged down.The quality kept intact and the quantity optimized is the best way to cover all business objectives.

There is a need to focus on the brewery as the production levels have to be met and quality is to be kept intact.The price difference has to be reversed.Inclusion of technology and experts carrying out the optimization of production process is a must.The artisanal feature of the craft beer is important for the company.

The focus shift is away from the bar right now as there is a capacity limit to that single bar.The sales through other bars and restaurant owners is crucial to 961’s profit. Meeting the growing demand is essential for its survival through satisfied customers.This would all put 961 Beer as a progressive company across the region than as the aggressive one.

961 Beer can open up new bars across Lebanon if unable to overcome the reluctance from other bar owners.

Also, where the political turbulence continues to affect the local business operations, it is better for Hajjar to expand across the borders and channel the international media’s attention to leverage on growing its company. 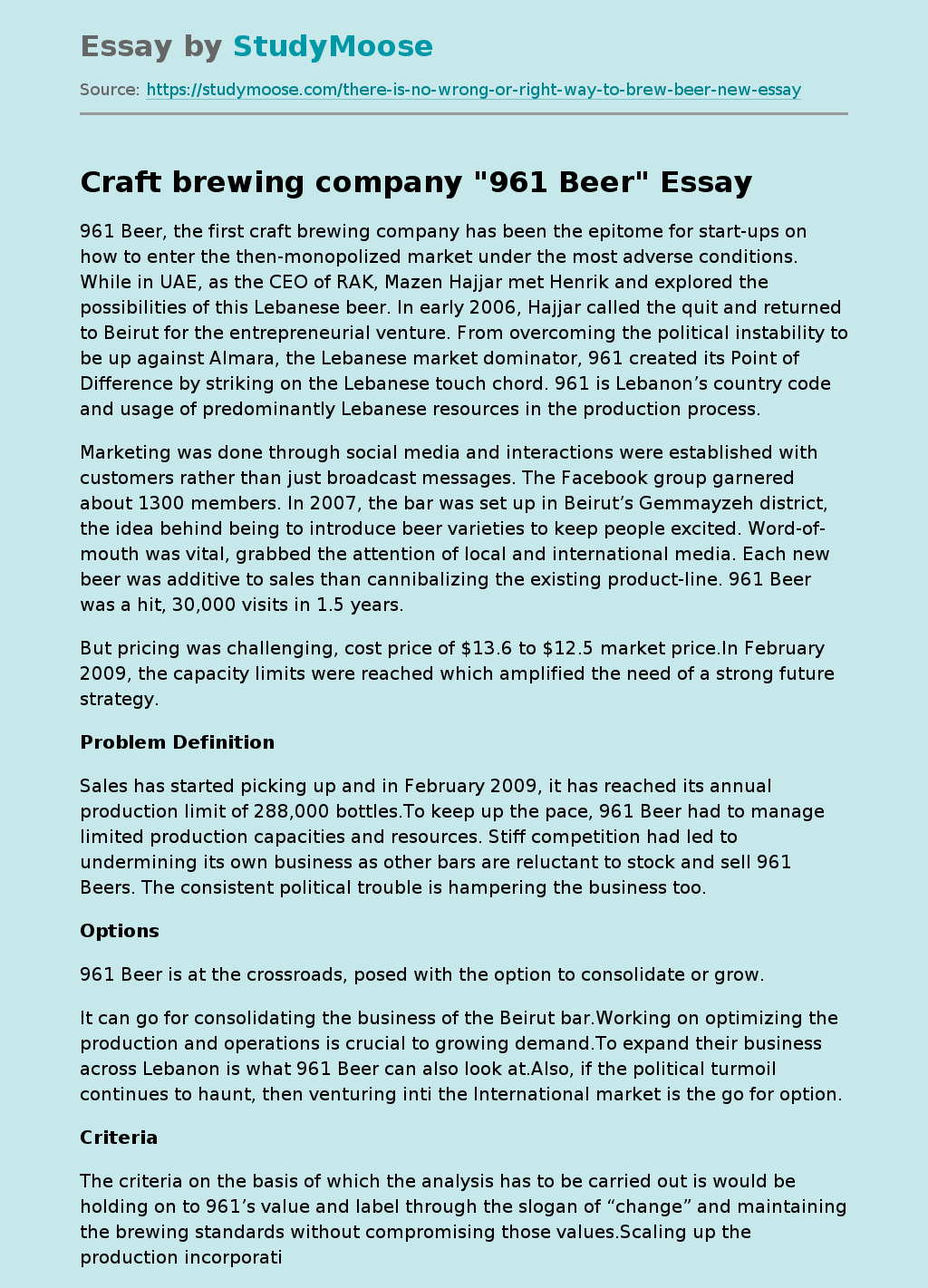