In the early years of the 21st century, European brewers faced a surprising paradox. The standard centre of the beer market around the world and home to the world’s largest developing companies, Europe, was turning off beer. Beer usage was falling in the largest markets of Germany and the UK, while blossoming in emerging markets worldwide. In 2008, Europe’s biggest market, Germany, ranked only fifth in the world, behind China, the United States, Brazil and Russia. China, with 12% annual growth in between 2003 and 2008, had actually become the biggest single market by volume, alone accounting for 23% of world usage (Euromonitor, 2010).

Don't use plagiarized sources. Get your custom essay on
“ Global Forces and the Western European Brewing Industry ”
Get custom paper
NEW! smart matching with writer

Decrease in standard key markets is due to a number of aspects. Governments are campaigning strongly versus intoxicated driving, impacting the propensity to drink beer in dining establishments, pubs and bars. There is increasing awareness of the effects of alcohol on health and fitness. Particularly in the United Kingdom, there is growing hostility to so-called ‘binge drinking’, excessive alcohol intake in pubs and clubs.

White wines have actually likewise become progressively popular in Northern European markets. However, beer usage per capita differs widely in between nations, being four times greater in Germany than in Italy, for example. Some typically low intake European markets have actually been revealing excellent development.

The drive versus inebriated driving and binge drinking has helped shift sales from the ‘on-trade’ (beer consumed on the facilities, as in clubs or restaurants) to the off-trade (retail). Worldwide, the off-trade increased from 63% of volume in 2000 to 67% in 2008.

The off-trade is significantly controlled by large grocery store chains such as Tesco or Carrefour, who often utilize cut-price deals on beer in order to lure individuals into their stores. More than one fifth of beer volume is now sold through supermarkets.

German retailers such as Aldi and Lidl have had considerable success with their own ‘private-label’ (rather than brewery-branded beers). Pubs have suffered : in the United Kingdom, an estimated 50 pubs closed per week during the recessionary year 2009. However, although on-trade volumes are falling in Europe, brewers flavoured satisfied the sales values are generally premium rising, as brewers introduce higher-prices premium products such as non-alcoholic beers, extra cold largers or fruits flavoured beers. On the other hand, a good deal of this increasing demand for premium products is being by the import of
apparently exotic beers from overseas (see table 2). 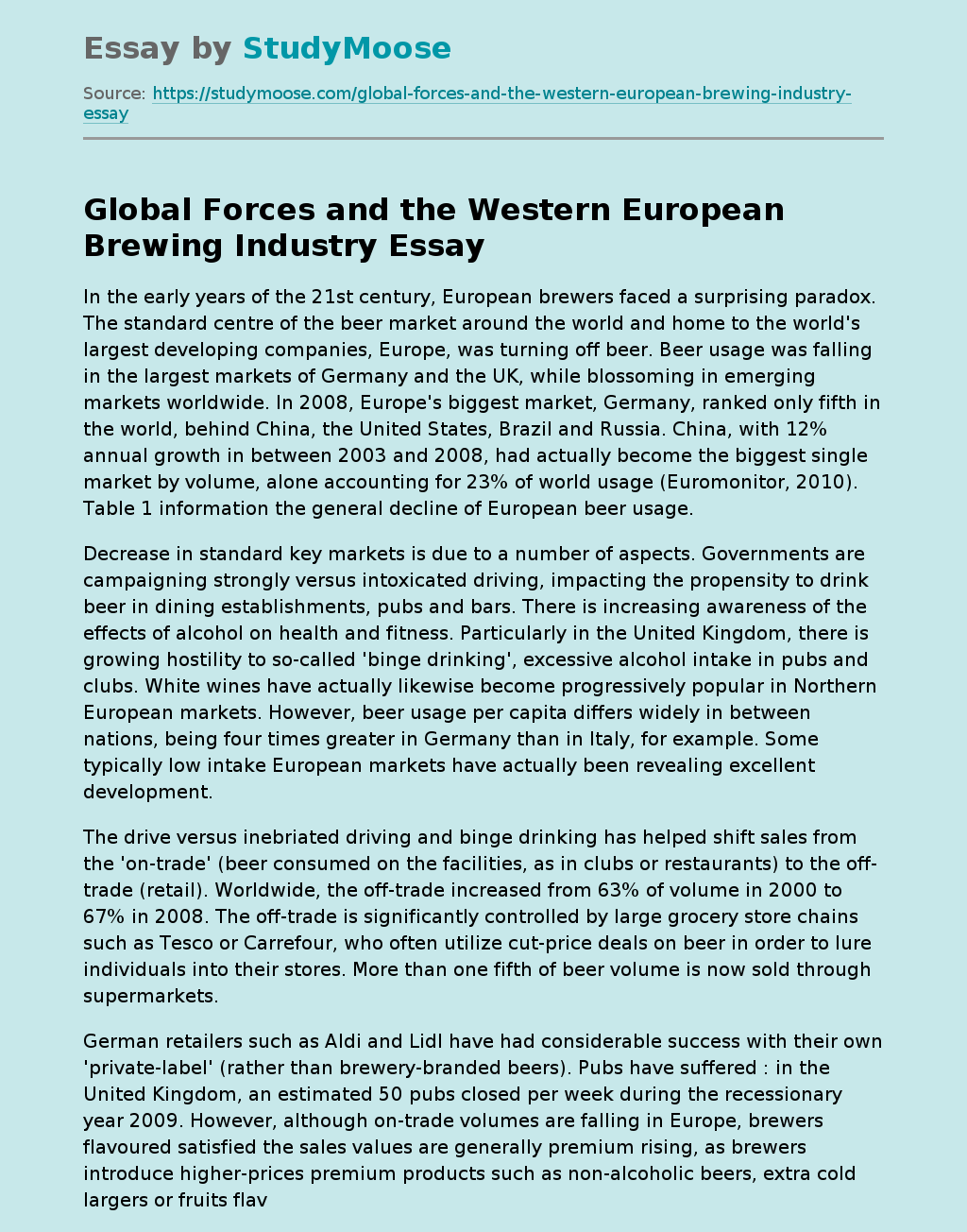