Okonkwo’s struggle to live up to what he perceives as “traditional” standards of masculinity, and his failure adapt to a changing world, help point out the importance of custom and tradition in the novel. The Ibo tribe defines itself through the age-old traditions it practices in Things Fall Apart. While some habits mold tribe members’ daily lives, other customs are reserved for special ceremonies. For example, the head of a household honors any male guest by praying over and sharing a kola nut with him, offering the guest the privilege of breaking the nut.

Don't use plagiarized sources. Get your custom essay on
“ Themes of Things Fall Apart ”
Get custom paper
NEW! smart matching with writer

They dank palm-wine together, with the oldest person taking the first drink after the provider has tasted it. Ceremonial customs are more elaborate. The Feast of the New Yam provides an illustration. This Feast gives the tribe an opportunity to thank Am, the earth goddess and source of all fertility. Preparations for the Feast include thorough hut-cleaning and decorating, cooking, body painting, and head shaving. Relatives come from great distances to partake in the feast and to drink palm-wine.

Then, on the second day of the celebration, the great wrestling match is held.

The entire village meets in the village playground, or llo, for the drumming, dancing, and wrestling. The festival continues through the night until the final round is won. Because the tribe views winning a match as a great achievement, the winner earns the tribe’s ongoing respect. Tribal custom dictates every aspect of members’ lives. The tribe determines a man’s worth by the number of titles he holds, the number of wives he acquires, and the number of yams he grows.

The tribe acknowledges a man’s very being by the gods’ approval of him.

Without custom and tradition, the tribe does not exist. Choices and Consequences In Things Fall Apart, Okonkwo makes a choice early in life to overcome his father’s legacy. As a result, Okonkwo gains the tribe’s respect through his constant hard work. The tribe rewards him by recognizing his achievements and honoring him as a great warrior. The tribe believes that Okonkwo’s personal god, or chi, is good (fate has blessed him). Nevertheless, they realize that Okonkwo has worked hard to achieve all that he has (if a man says yes, his chi says yes).

When he breaks the Week of Peace, however, the tribe believes that Okonkwo has begun to feel too self-important and has challenged his chi. They fear the consequences his actions may bring. The tribe decides to kill Ikemefuna. Even though Ezeudu warns Okonkwo not to be a part of the plan, Okonkwo himself kills Ikemefuna. Okonkwo chooses to kill the boy rather than to appear weak. When Okonkwo is in exile, he ponders the tribe’s view of his chi. He thinks that maybe they have been wrong—that his chi was not made for great things. Okonkwo blames his exile on his chi.

He refuses to accept that his actions have led him to this point. He sees no connections among his breaking the Week of Peace, his killing Ikemefuna, and his shooting Ezeudu’s son In Okonkwo’s eyes, his troubles result from ill fate and chance. Alienation and Loneliness Okonkwo’s exile isolates him from all he has ever known in Things Fall Apart. The good name he had built for himself with his tribesmen is a thing of the past. He must start anew. The thought overwhelms him, and Okonkwo feels nothing but despair. Visits from his good friend, Obierika, do little to cheer Okonkwo.

News of the white man’s intrusion and the tribe’s reactions to it disturb him. His distance from the village, and his lack of connection to it, give him a sense of helplessness. Even worse, Okonkwo’s son, Nwoye, joins the white man’s mission efforts. Okonkwo’s return to the village does nothing to lessen his feelings of alienation and loneliness. The tribe he rejoins is not the same tribe he left. While he does not expect to be received as the respected warrior he once was, he does think that his arrival will prompt an occasion to be remembered.

When the clan takes no special notice of his return, Okonkwo realizes that the white man has been too successful in his efforts to change the tribe’s ways. Okonkwo grieves the loss of his tribe and the life he once knew. He is not able to overcome his sense of complete alienation. Betrayal In Things Fall Apart, Okonkwo feels betrayed by his personal god, or chi, which has allowed him to produce a son who is effeminate. Nwoye continually disappoints Okonkwo. As a child, Nwoye prefers his mother’s stories to masculine pursuits.

As an adult, Nwoye joins the white missionaries. Okonkwo also feels betrayed by his clan. He does not understand why his fellow tribesmen have not stood up against the white intruders. When Okonkwo returns from exile, his clan has all but disintegrated. Many of the tribe’s leaders have joined the missionaries’ efforts; tribal beliefs and customs are being ignored. Okonkwo mourns the death of the strong tribe he once knew and despises the “woman-like” tribe that has taken its place. Change and Transformation

The tribe to which Okonkwo returns has undergone a complete transformation during his absence in Things Fall Apart. The warlike Ibo once looked to its elders for guidance, made sacrifices to gods for deliverance, and solved conflicts though confrontation. Now the Ibo are “woman-like”; they discuss matters among themselves and pray to a god they can not see. Rather than immediately declare war on the Christians when Enoch unmasks the eg-wugwu, or ancestral spirit, the Ibo only destroy Enoch’s compound.

Culture Clash. The arrival of the white man and his culture heralds the death of the Ibo culture in Things Fall Apart. The white man does not honor the tribe’s customs and strives to convince tribesmen that the white man’s ways are better. Achieving some success, the white man encourages the tribesmen who join him, increasing the white man’s ranks. As a result, the tribe is split, pitting brother against brother and father against son. Tribal practices diminish as the bond that ties tribesmen deteriorates. Death eventually comes to the weaker of the clashing cultures. 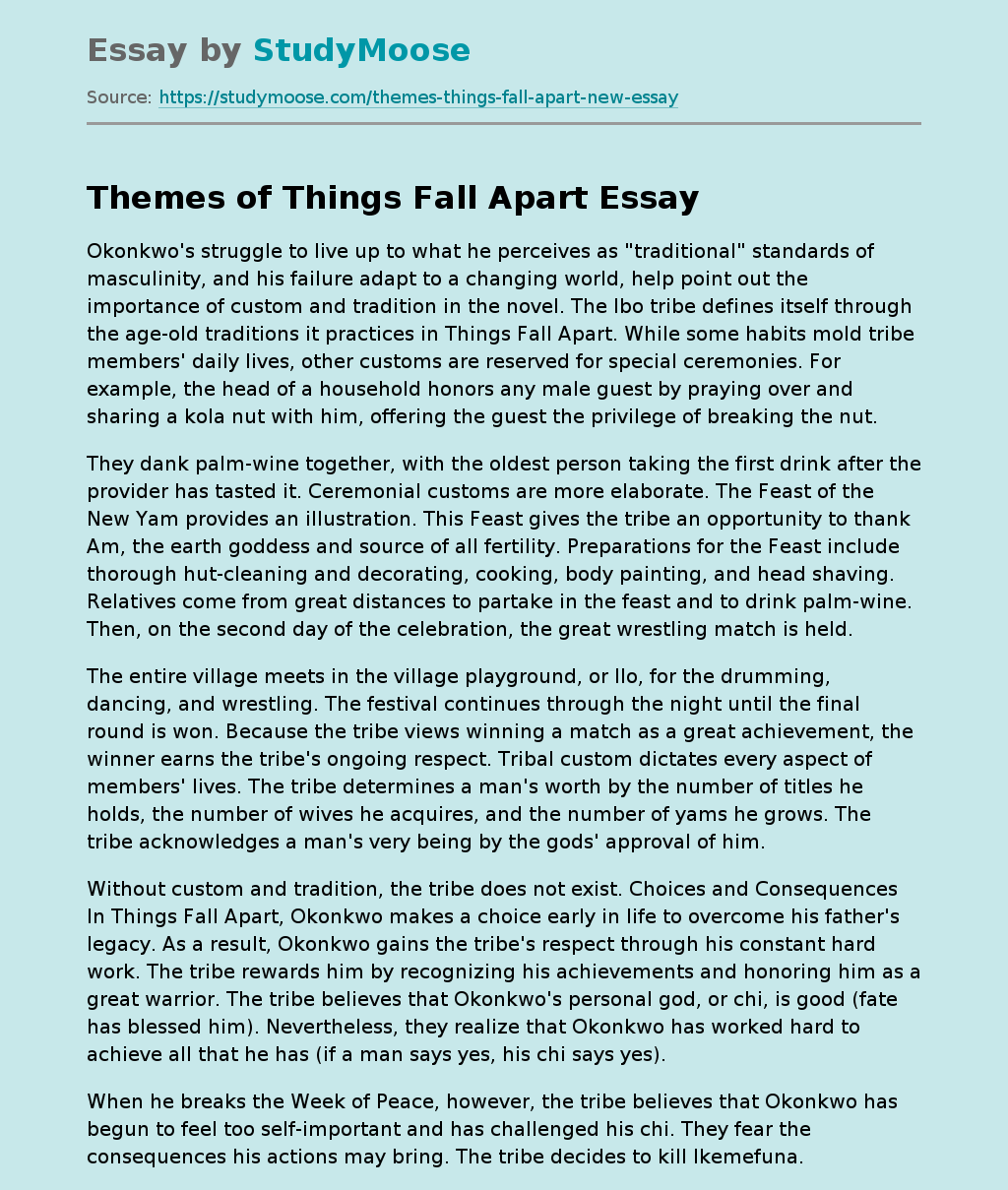