Theme of Friendship in Bridge to Terabithia

Bridge to Terabithia is a family film about a 5th-grade boy, Jesse Aarons or Jess, who deals with the struggles of balancing the pressures at school and home all while trying to figure out who he is as a person (Csupó, 2007). In the movie, viewers can really see how Jess develops as a person throughout and how his new friend, Leslie, helps him truly find himself. Individualism and friendship are the main themes in this movie, but Terabithia is a significant symbol or theme of childhood in the movie (Csupó, 2007).

Don't use plagiarized sources. Get your custom essay on
“ Theme of Friendship in Bridge to Terabithia ”
Get custom paper
NEW! smart matching with writer

Terabithia is a place that Jess and Leslie create after becoming new friends. This place they create symbolizes a place where children can go to escape from the responsibilities and pressures of the ‘real world (Csupó, 2007).’ It is a place where they can be children and express their creativity and imagination. At the beginning of the movie, Jess is skeptical of Leslie creating or imagining the Kingdom of Terabithia (Csupó, 2007). By the end of the movie, Jess learns that being creative and imaginative is a good thing and he builds a new strength of learning how to balance being a child while becoming more mature and dealing with the challenges in his life.

Proficient in: Bridge To Terabithia

Friendship is displayed throughout Bridge to Terabithia between Jess and Leslie (Csupó, 2007). She is someone that moved into the house next to Jess,’ and they build a great bond or friendship. After they become friends, they each grew as individuals. Jess loves to draw, and Leslie’s creativity and imagining helped him build his artistic abilities.

Leslie learns from Jess how to have courage and strength to stand up for herself or be the bigger person with bullies at school. They went through their hardships together, learned about each other and themselves, and built a special place, Terabithia, where their childhood and true selves are represented (Csupó, 2007).

Another theme is individuality. Jess is a child that is quiet and struggles with dealing with the demands of his home life and bullies at school. In the beginning, we see that he is someone that doesn’t hang out with other kids in his class because he is not interested in what they do and they bully him (Csupó, 2007). At home, his parents have high expectations for him and they never really acknowledge him for who he is. Once he meets Leslie, he starts to express his true self and be a child. Unfortunately, Leslie passes away towards the end of the movie but their friendship made a huge impact on him, and he gains the strength to live on with the memories of her because of the things their friendship taught him.

A child’s sense of self or their social, emotional, and personality characteristics are a part of their affective development (Tu, 2019). In the movie, Jess is 5th grader that loves to draw and run. He lives in a rural, poor area and has two older sisters and one younger sister. Since he is the only boy in the family, his father holds high expectations for him to be a ‘man.’ Learning theories of affective development include modeling and reinforcement of others (Tu, 2019). A child looks up to people such as their parents, so it is important that parents display positive modeling behaviors. Their home is very unorganized and chaotic, and Jess is the only one expected to help around the house. This ‘model’ shows Jess that he is supposed to grow up and be the ‘man’ in the house even though he is still very young and should be enjoying his childhood with some responsibilities. Reinforcement of others is doing something right and being positively rewarded (Zembar, 2009).

Jess is constantly helping around the house ,and he likes to offer his help to his father because all he wants is his dad’s approval or reinforcement and attention, but it is lacking. The lack of those things changes by the end of the movie. Jess’ parents start to realize that he is still a child but he is also very mature and they start being less demanding and show their affection. The movie portrays reinforcement somewhat inaccurately because Jess continues to want to help out without rewards because he so longingly wants his father to be proud of him or give him attention.

A child’s personality consists of patterns of thinking, feeling, and behaving that are unique to each (Tu, 2019). The way a person reacts or interacts with other people or their environment can help define their personality, and there are five major parts (Tu, 2019). At the beginning of Bridge to Terabithia, Jess starts as someone who is very avoidant, quiet, shy, and does not interact with other children at school. At home, he does what he is supposed to, such as chores or homework, and then goes to his room to draw or go to bed. After Jess meets Leslie, he becomes more engaged with the world around him. He engages in music class, goes out and plays with Leslie in the woods, and overall seems happier and outgoing. Jess is a character that really has a lot of compassion for others. There was a scene where an animal broke into their greenhouse and destroyed all their vegetables, so his dad was pretty upset (Csupó, 2007).

Jess felt terrible that this had happened and offered to help clean up the mess. Jess is very encouraging and was the person that convinced Leslie to be the bigger person and talk to one of the bullies that were dealing with some challenges at school. This shows that he felt empathy even towards his own bully. He is also someone that is disciplined and has impulse control but is also willing to try new things. He was skeptical at the beginning of the movie to try things that Leslie was suggesting because they weren’t real, but he learned quickly how to use his imagination and collaborate with Leslie to create their Kingdom (Csupó, 2007).

I would say that Jess is emotionally stable and knows how to control his emotions. His emotions were mostly appropriate for the situations that he was dealing with except after Leslie’s death. He was overwhelmed with all his emotions and ran into the woods very upset. Overall, Jess is a very mature child that really opens up and finds himself throughout the events of the movie. The portrayal of Jess’ personality in the movie is accurate with the concept or theory because a child’s personality is developing and changing during middle childhood which is what we see with Jess.

Self-efficiency is believing in your own abilities to achieve something (Zembar, 2009). Jess built his self-efficiency by watching Leslie’s perspective on life. She was someone that was very joyful, positive, and creative and Jess brought those characteristics into his own life. Verbal encouragement also contributed because people were encouraging and caring towards Jess’ needs or feelings. Jess loves art, and one of his teachers encouraged him not to let other children’s negativity get in the way of something he loves to do (Csupó, 2007). He also had words of encouragement after Leslie’s death by one of his teachers and his dad. Jess’ teacher explained that she knows how he feels because she dealt with the death of her husband and that it is okay to express your emotions and cry about something that must be so hard to understand (Csupó, 2007). His father made a major contribution to his self-esteem and self-efficiency when he comforted Jess and told him that Leslie’s death was not his fault and that she was a special person in his life and he should hold onto that to keep her alive in his heart (Csupó, 2007).

Jesse Aarons is an excellent example of how important it is during middle childhood that children explore and express themselves to build their identity. Bridge to Terabithia displays so many changes and challenges that Jess went through to become the person that he is. It is also a great movie to show that children need their childhood for this reason. Parents need to be aware of the pressures that they are putting on their children in this stage because they are still learning about themselves. Middle childhood is an essential stage of development for children to transition from their childhood to adulthood because the people that they become during this stage will follow them into their adulthood. It is a stage where every child really finds their true self that will impact the rest of their lives.

Theme of Friendship in Bridge to Terabithia. (2021, Dec 02). Retrieved from https://studymoose.com/theme-of-friendship-in-bridge-to-terabithia-essay 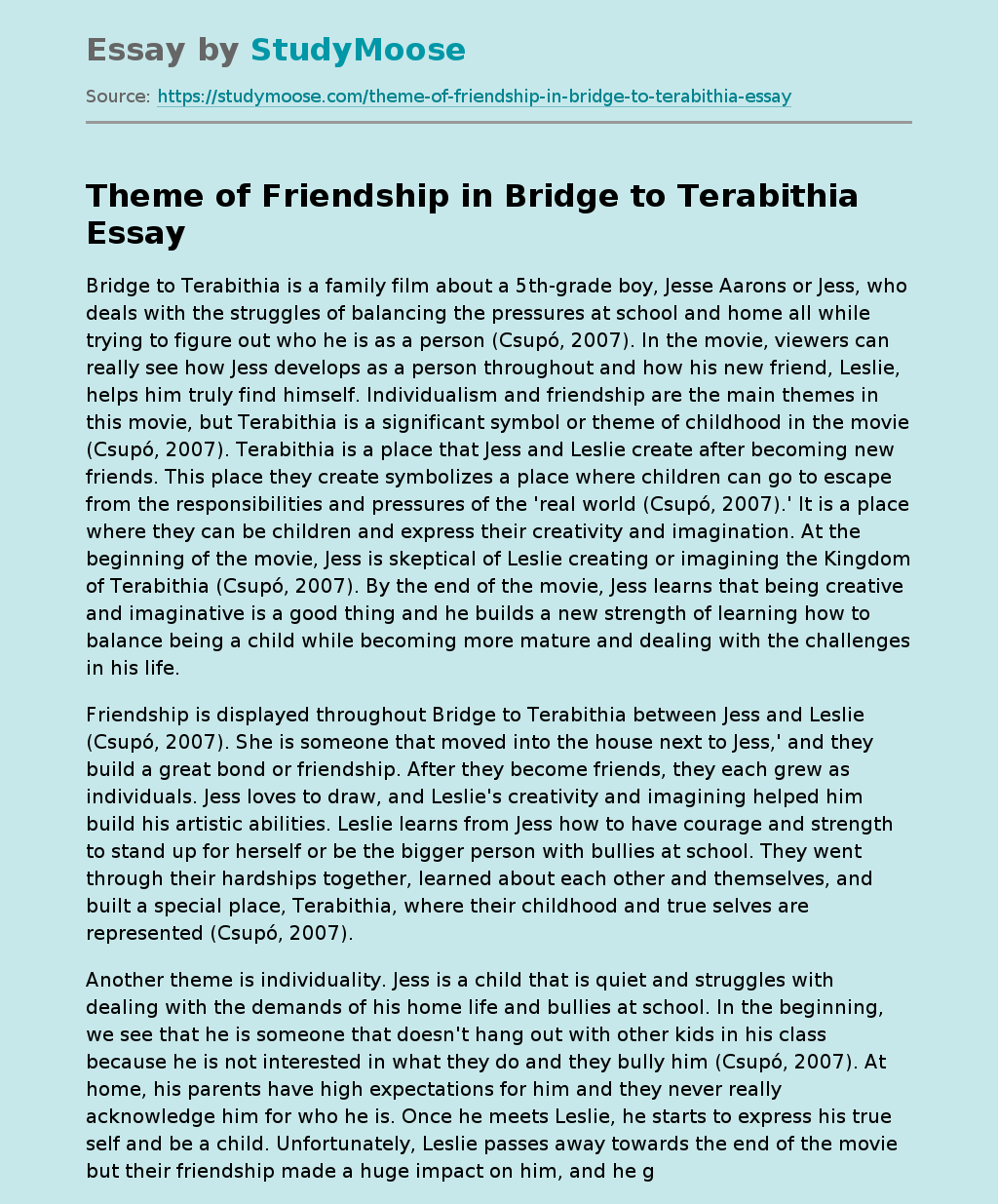