The oil on canvas painting titled simply ‘Sunflowers’ (NG) is one of the most famous works of art depicting still life. Also called Vase with Fifteen Sunflowers, the original painting is currently housed in the collection of the National Gallery in London, England. The 92. 1 x 73cm oil painting was created by Dutch painter Vincent Van Gogh (1853-1890) in Arles, in 1888, as one of a series of several sunflower paintings. The sunflowers in the painting are at various stages in the plant’s life cycle symbolic in its relevance to the cycle of human life, from wilting to fresh new bloom and stand in a simple vase on a table.

Don't use plagiarized sources. Get your custom essay on
“ The Van Gogh Sunflowers ”
Get custom paper
NEW! smart matching with writer

The vase, table and background have also been painted in yellows and yellowish brown tones giving the whole painting a special bright quality. These seem like blocks of color underneath the detail of the sunflowers and in the painting overall Van Gogh used a variety of techniques ranging from pointillist dots to chunky brush strokes in sculptural form.

The subject matter was significant for Van Gogh as Dutch literature shows that the sunflower represents devotion and loyalty and the color yellow was a symbol of happiness for the artist.

Van Gogh uses curvy forms and intensive brush strokes to paint the sunflowers reflecting his emotions while the rest of the painting has no complex shadows, texture or lines ensuring the flowers are the focal point. The painting has harmony in color and balance with the centered vase, and there are two chromatic areas in the painting with the emphasis being on the top heavy composition of the flowers rather than the narrow surface below.

Breaking the cardinal rules of 2 painting at that time, Van Gogh was unable to use the impressionist style in his work and could not play down the intensity he felt while painting so he rejected using conventional principles of art. Van Gogh created several canvases immortalizing sunflowers during the late 1800’s and some are hard to distinguish but for very small differences to prove that they are different from one another. He also experimented with dead nature paintings where he again used sunflowers thus keeping to the same theme.

In ‘Dead Nature with Two Sunflowers’ he used dry flowers without a vase which displayed his thick, doughy strokes more effectively. A contemporary of Van Gogh who also used sunflowers as a subject was Claude Monet. His oil on canvas painting ‘Bouquet of Sunflowers’ (Met Museum) was produced in 1881 and is now housed in the Metropolitan Museum of Art in New York. The 81. 3 x 101cm painting depicts the same flower yet the color, light and style of the two art works are very different. Claude Monet (1840-1926) was a Paris born artist who is still considered to be one of the leading masters of impressionism of his era (Columbia).

Never very interested in portraits or the human form, he was more subdued in his paintings and used nature and, very often, his own garden to produce works of still life or landscape. In his painting of the sunflowers he used a blurrier outline for the flowers, vase and table. Instead of a flat block of color for the background, he created a moving space made by hundreds of short brush strokes in brown and blue tones. In comparison, the two artists relied heavily on expressive use of color in both paintings and, while different in style, the brush strokes of both blend together providing the paintings with mottled backgrounds.

Due to Van Gogh’s exposure to the Impressionist movement in Paris, he 3 was influenced by the use of color and experimented with unmixed colors as used by Monet and they both similarly use color most generously. In comparison to Monet, who had lessons in modernism very early in his life when he went to Paris in 1859 (Emmons 18) he also has a distinct artistic aura and interprets his own vision of what he sees. Although Van Gogh did not use any shading or depth in his painting, both pieces have a three dimensional quality.

In contrast, the colors of the vase in Van Gogh’s painting are brighter and tend to jump out whereas Monet’s is vague and it is hard to notice that the vase is not balanced in the center of the composition. The most striking contrast is the lack of a light source in Van Gogh’s ‘Sunflowers’ whereas Monet has made use of shading and texture in the tablecloth and the background and used different colors for each section of the composition; however, although the colors are very subdued, they are softer and of a calmer palette.

Monet used short and swift strokes of the brush and labored longer over his work while the wilder Van Gogh’s were longer and thicker and slightly more random. Van Gogh expresses his emotions with vigor in his ‘Sunflowers’ while Monet offers contentment and absolute beauty. Van Gogh was dismissive of the Impressionist movement in general finding it too decorative and preferred the emotion and symbolism of the Post-Impressionists. He preferred to paint expressively and reveal his pain and personal torment through his work. He had a restless attitude to life and this reflects in his belief in energetic, intense colors.

He was influenced by Japanese art and the Asian philosophy of life and the significant theme of his work is the struggle of self-discovery. The ‘Sunflowers’ played a large role in the influence Van Gogh had on the Symbolist movement and highlighting his artistic vision (Met Museum). 4 In my opinion, Van Gogh displayed his feelings about life and death in the ‘Sunflowers’. However, unlike some of his work depicting labor, poverty and simplicity, his still life painting of the flowers symbolizes a time in his life when he may have been experiencing optimism and a turning point in his life for the better. 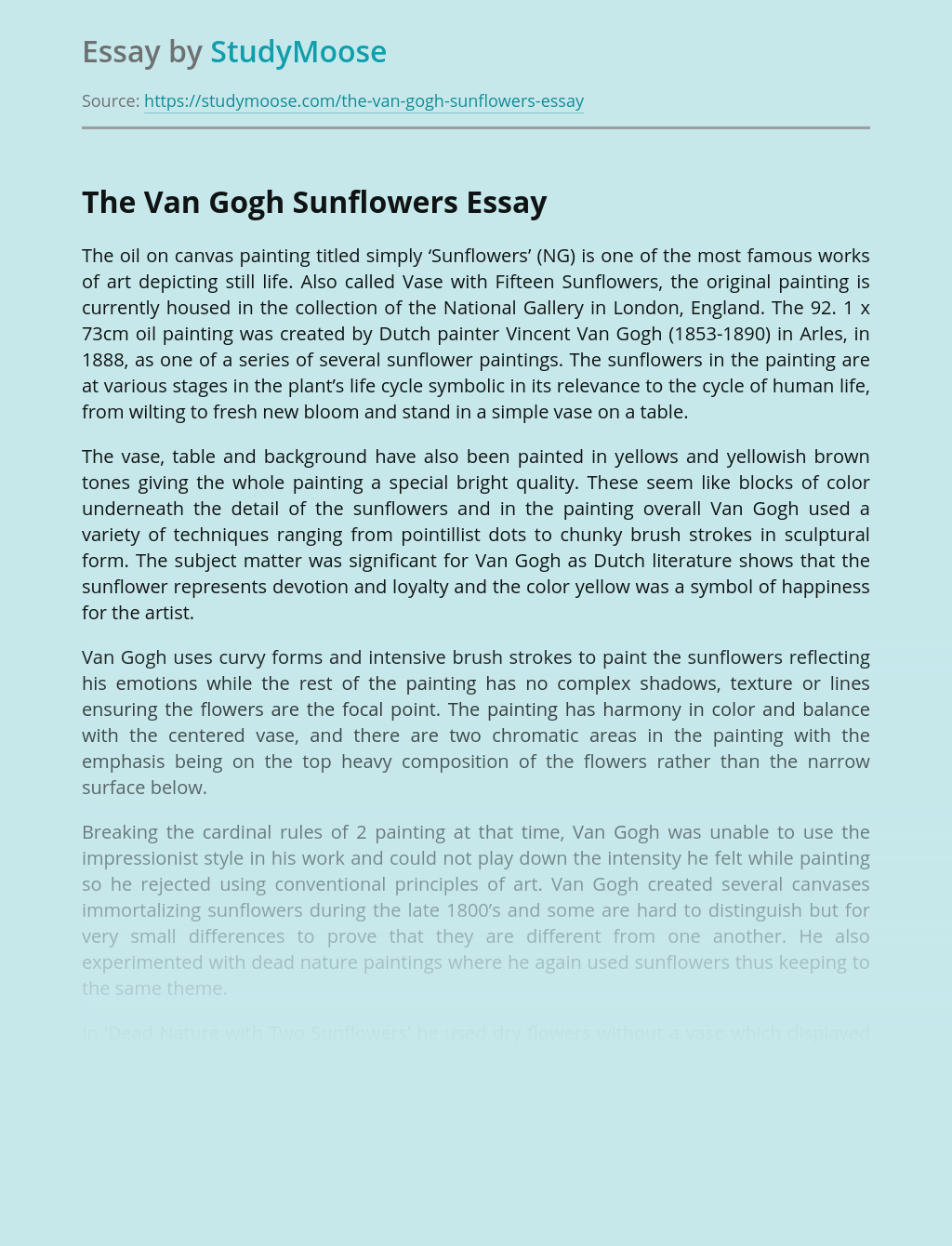