The Usage of Cisplatin for Chemotherapeutic Purposes

Cisplatin is one of the best and first metal-based chemotherapeutic drugs, used for wide range of solid cancers such as testicular, ovarian, bladder, lung, head and neck, gastric cancers[1]. It exerts its anticancer activity by binding with genomic and mitochondrial deoxyribonucleic acid (DNA). This action creates DNA lesions, arrests its replication, production of messenger ribonucleic acid (mRNA) and proteins. In addition, it activates several transduction pathways which finally lead to cell necrosis or apoptosis[2]. The usage of cisplatin for chemotherapeutic purposes is limited due to its several side-effects that include nephrotoxicity, ototoxicity, and neurotoxicity[3].

Don't use plagiarized sources. Get your custom essay on
“ The Usage of Cisplatin for Chemotherapeutic Purposes ”
Get custom paper
NEW! smart matching with writer

Granulocyte colony stimulating factor (G-CSF) is a glycoprotein that is synthesized mainly by monocytes and lymphocytes. In addition, it can be produced by fibroblasts, endothelial cells, bone marrow stromal cells, astrocytes and neurons. This factor exerts its effects by binding to a single homodimer receptor, G-CSFR[4].

It has been reported that G-CSF can induce peripheral nerve protection and regeneration, so it is considered an important neurotrophic factor.

Moreover, it improves angiogenesis and has anti-apoptotic influence[5].

The Cucurbitaceae family includes citrullus lanatus or watermelon which has been extensively studied for its pharmacological and therapeutic activities. Citrullus lanatus has antibacterial, antiulcer, antioxidant, anti-inflammatory, and analgesic effects. It induces protective effect against prostatic hyperplasia, atherosclerosis and hepatic injury[6]. The antioxidant effect exerted by citrullus lanatus could explain one of the mechanisms by which this fruit could be used as dietary intervention for prevention and management of cardiovascular and neurodegenerative diseases[7]

This work was performed to study the effect of cisplatin on the histological structure of cerebellar cortex of adult albino rat and the possible protective role of G-CSF versus citrullus lanatus (watermelon) juice.

The current study was carried on 40 adult male albino rats about 12 weeks old with average body weight 200 grams. They were bought from and housed in the Animal House of Kasr Al-Ainy. Animals were housed in hygienic stainless steel cages and kept in clean well ventilated room, at room temperature and allowed food and water ad libitum. They were treated according to guidelines approved by Institutional Animal Care and Use Committee of Cairo University. Approval Number of this experiment was CU III S 86 17.

Control group: included 16 rats that were subdivided equally into the following subgroups (4 rats each):

Twenty four rats were divided equally into the following 3 groups (8 rats each):

? The experiment ended 3 days after the last cisplatin injection[11].

At the end of experiment, blood samples were taken from tail vein of all rats to detect levels of malondialdehyde (MDA) and reduced glutathione (GSH)[12]. Blood samples were centrifuged at 3000 rpm for 10 minutes at room temperature and stored at -20°C until they were assayed. These measurements were done at Biochemistry and Molecular Biology unit of Medical Biochemistry department, Faculty of Medicine, Cairo University.

After blood collection, all animals were euthanized by IP injection of sodium pentobarbital (100 mg/kg)[13]. Then the animals were given intracardiac injection of 1ml of 10% formalin. Skull of each animal was opened and cerebellum was immediately dissected out and divided into two hemispheres:

? The right cerebellar hemisphere was fixed in 10% buffered formalin solution, dehydrated in ascending grades of ethanol and embedded in paraffin. Serial sections of 5 µm thickness were cut and subjected to the following techniques:

The Usage of Cisplatin for Chemotherapeutic Purposes. (2019, Nov 23). Retrieved from https://studymoose.com/the-usage-of-cisplatin-for-chemotherapeutic-purposes-essay 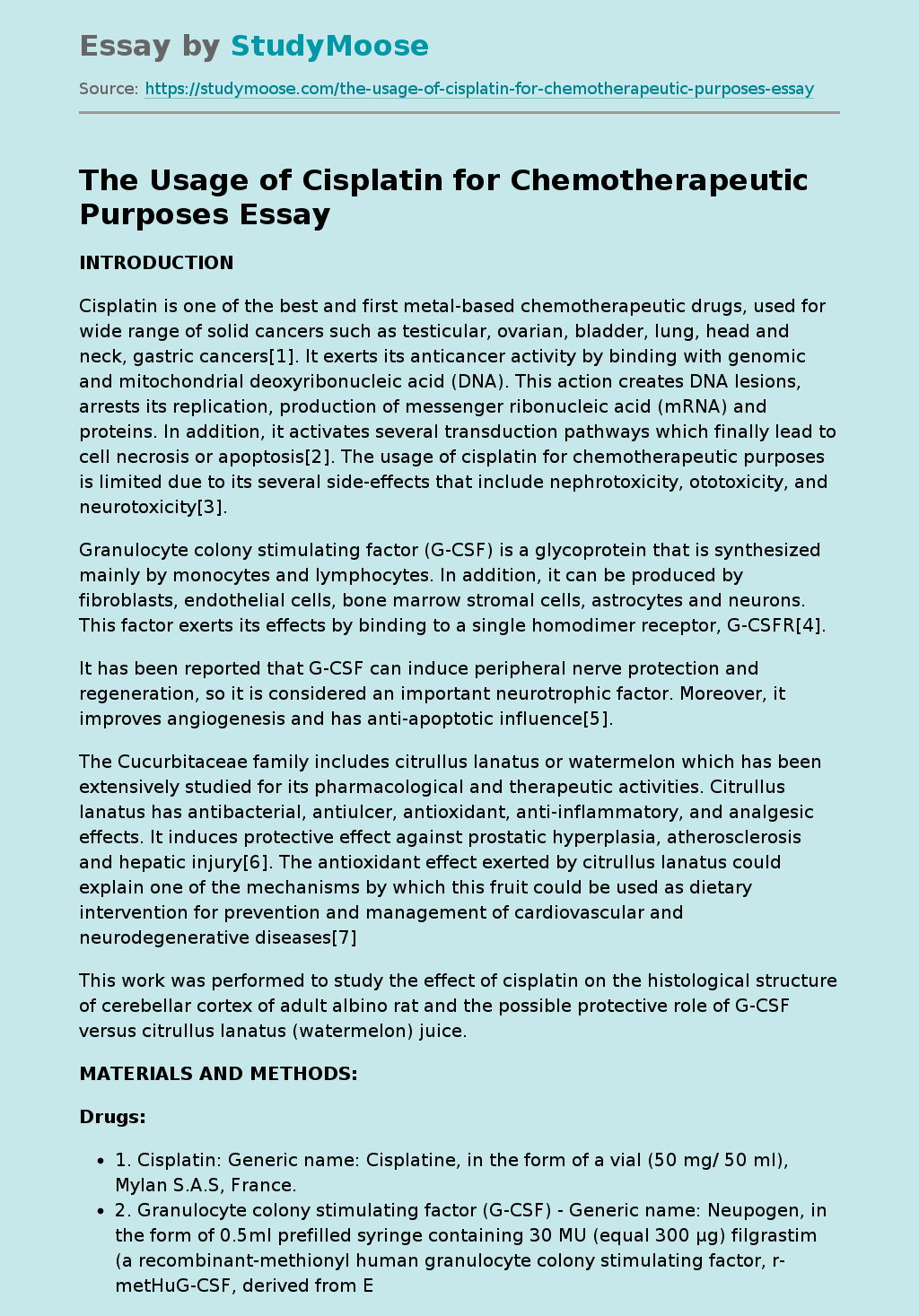