The Two Sides of Police Brutality

Barack Obama once said, “Our police officers put their lives on the line for us every single day. They’ve got a tough job to do to maintain public safety and hold accountable those who break the law (Earnest 2014).” This statement uses a rhetorical device known as hyperbole. A hyperbole is used when there is an over exaggeration to prove one’s point. In this case, Obama is trying to prove the importance of the police and their difficult jobs that put them at risks everyday.

Don't use plagiarized sources. Get your custom essay on
“ The Two Sides of Police Brutality ”
Get custom paper
NEW! smart matching with writer

Many individuals, however, have begun to question the work ethics of the police as the rates of police brutality has increased. In today’s society, police brutality has become a controversial issue, as the media uses various tactics to showcase the police in different aspects. The media showcases two sides to this issue: the police using improper, excessive behavior to citizens and the police effectively doing their jobs within their rulebooks.

Police brutality is a horrific, reoccurring problem that has been going on for a long time.

In our culture the rise of technology has made it impossible for unjust treatment from the law enforcement to go unnoticed. Every action is either recorded on body cameras or from handheld devices being used by a bystander watching. The gatekeepers are the news channels and people who personally witness these events. These bystanders often broadcast these issues on social media or television for others to see. This has influenced activists and groups of individuals to create a movements to help those who have been affected by police brutality.

There are constantly new articles or videos being released in the media for the public to view. Videos such as that of Eric Garner saying, “I can’t breathe” 11 times until he lost consciousness or that of Diamond Reynolds stating to the police officer, “You shot four bullets into him, sir. He was just getting his license and registration, sir’” (Alang, 2017, p.106). Police officers are not following the correct training and quick to abuse their power. It is causing physical and mental abuse to the citizens who are supposed to feel protected by the police. A moral judgement can evolve when it comes to police brutality. A moral judgment comes from whether or not you think something is morally wrong. Many people think that police treatment against citizens is wrong and unethical. There are many unnecessary lives loss over the assumptions made from police officers.

Police officers are using discrimination as a reason for probable cause of their actions Unfortunately, certain races are more likely to become a victim to unfair treatment. “Blacks are almost five times more likely than are Whites to have a police intervention-related injury”(Alang, 2017, p.106). For this reason, the way people react to this issue can come from a personal bias regarding the color their skin. Since people of color are more probable to encounter this problem it is more likely to anger them and continue to further the division of the citizens and law enforcement.

In a series of shootings that has lead to a national debate regarding the use of deadly force by law enforcement officers, the law itself have given little to no guidance on when the use of force by law enforcement is justified (Gross, J., 2016, p 155). In 1985, Tennessee vs Garner, a police officer used deadly force by shooting and killing a teenage boy who was running away from him. In the officers defense, he used the Tennessee statute that an authorized police officer may “use all the necessary means to effect the arrest” of the suspect (Gross, J., 2016, p 156). This story has led to what is an important guide to law enforcement. In 2014, two Ohio police officers responding to a 911 call of “a guy with a gun”, who was pointing it at people, shot and killed a 12-year-old boy who was playing with a toy gun. In an incident that could have been prevented had the police officers taken the correct steps, failed to do so by using deadly force. In the article, Judge, Jury, and Executioner, Gross, J. discusses Police Officers’ aggressive use of force stating that the assumption made by the court, that officers are forced to make split-second decisions regarding the use of force, and they typically must use force for self defense (2016, p 161). “The opposite is actually true-police officers typically use force offensively rather than defensively and do so with at least some degree of premeditation (Gross, J., 2016, p 161).” When it comes to the social media or the news, we often tend to read or view what pertains to our personal preference. In that, the news or social media will often use confirmation bias, “which refers to the tendency to attach more weight to evidence that supports our viewpoint” (Brooke, M. & Parker, R., 2017, p 15). When it comes to the safety of the citizens and the police where do we draw the line to say what is excessive and what is not.

The media fails to showcase a police’s ability to do his/her job properly. Often times, what is showcased in the media neglects certain aspects, such as the citizens behavior prior to his/her arrest. On May 20, 2014, a news outlet showed an African American professor named Ersula Ore being “body slammed” to the ground because the police believed that she had been jay-walking (Fridkin 2017). During the event, the woman and police officer got into a brawl, which resulted in what appeared to be an “aggressive” act done by the police. This instance, however, does not show the woman’s unwillingness to comply to the officer. In fact, the woman, Ore, “refused to show her identification” even though the officer had asked her 7 times (Fridkin 2017). This incidence, in which the media failed to showcase both sides of police brutality, has happened more than once. This is known as the Strawman fallacy, in which the media misrepresents the issue to fit their argument. In this case, the media focuses on a police’s aggressive ways to gain attention to show brutal force done by the police, but fails to show other aspects. An aspect that the media fails to showcase is a citizen’s behavior. In fact, a citizen’s “excessive involvement in crimes of violence and other serious offenses, and their resistance to authority when placed under arrest” has resulted in many misrepresented police shootings (McElvain 2009). Often times, the media uses repetition, a rhetorical device that is used when an individual repeats his or her statements or ideas multiple times, to showcase police brutality to make it appear as if there is an excessive amount of police brutality occuring within the nation; when in fact, there is just more news coverage (McLaughlin 2015). By showing more news coverage of these events, it will make it appear as if police brutality is occuring more and more within society. In addition, there are other factors that contribute to a citizen’s arrest, such as intoxication and prior violent criminal behavior (McElvain 2009). These factors, however, are downplayed by the media and viewed as insignificant premises. A downplayer is a rhetorical device that seeks to tone down the significance of something and raise attention to something else (Moore 2017). These factors are important to understand because it will provide more context to the situation and show the reasons why a policeman would exert force to control the situation. It is also important to know these types of information before coming to a conclusion about an issue because it will allow one to understand the background of the event in a better aspect.

Police officers are often under credited by the media. The media crops out real stories of people when being arrested or detained by police officers. These are some questions one should think about when viewing these kinds of videos: what did the person do to be arrested? How were the officers provoked? What actions of the detainee caused the police officer to use excessive force-whether it be resisting arrest or assaulting a police officer? People often use stereotypes against officers due to their image portrayed by the media. A stereotype is a held assumption about a group of people due to an individual’s cultural beliefs. An example of a stereotype commonly held is that police are only males. This is a popular stereotype because there are not much female policemen portrayed in the media. Another stereotype is that police use guns to handle situations. This stereotype is popular because of the fact that there have been many instances that showcase the police using their guns to handle a situation. Stereotypes, however, often influence and limit an individual’s thinking. In addition, these stereotypes can lead to a fallacy known as hasty generalization, which occurs when there is a generalization of a subject based on a small sample. For example, if a citizen has been exposed to too much news about the police using improper tactics and actions, the citizen may feel threatened by the police and not ask for their help. They may also view these authoritative figures negatively. Instead of creating these hasty generalizations, it is important for an individual to think critically about this issue and examine various points of the situation.

The issue of police brutality is shown in two contrasting aspects: police using aggressive, improper actions towards citizens or the police effectively handling situations within their code of ethics. In an era where news can be viewed or shared by the click of a button, and where many individuals can pick and choose what they read or hear. Ways for an individual to critically think about this issue and create a decision are to research, find biases or fallacies within their sources, and identify whether an article’s argument contains valid premises. If these steps are done, the individual will be able to gain a bettering understanding of the issue and therefore, be able to form an informed opinion.

The Two Sides of Police Brutality. (2021, Mar 18). Retrieved from https://studymoose.com/the-two-sides-of-police-brutality-essay 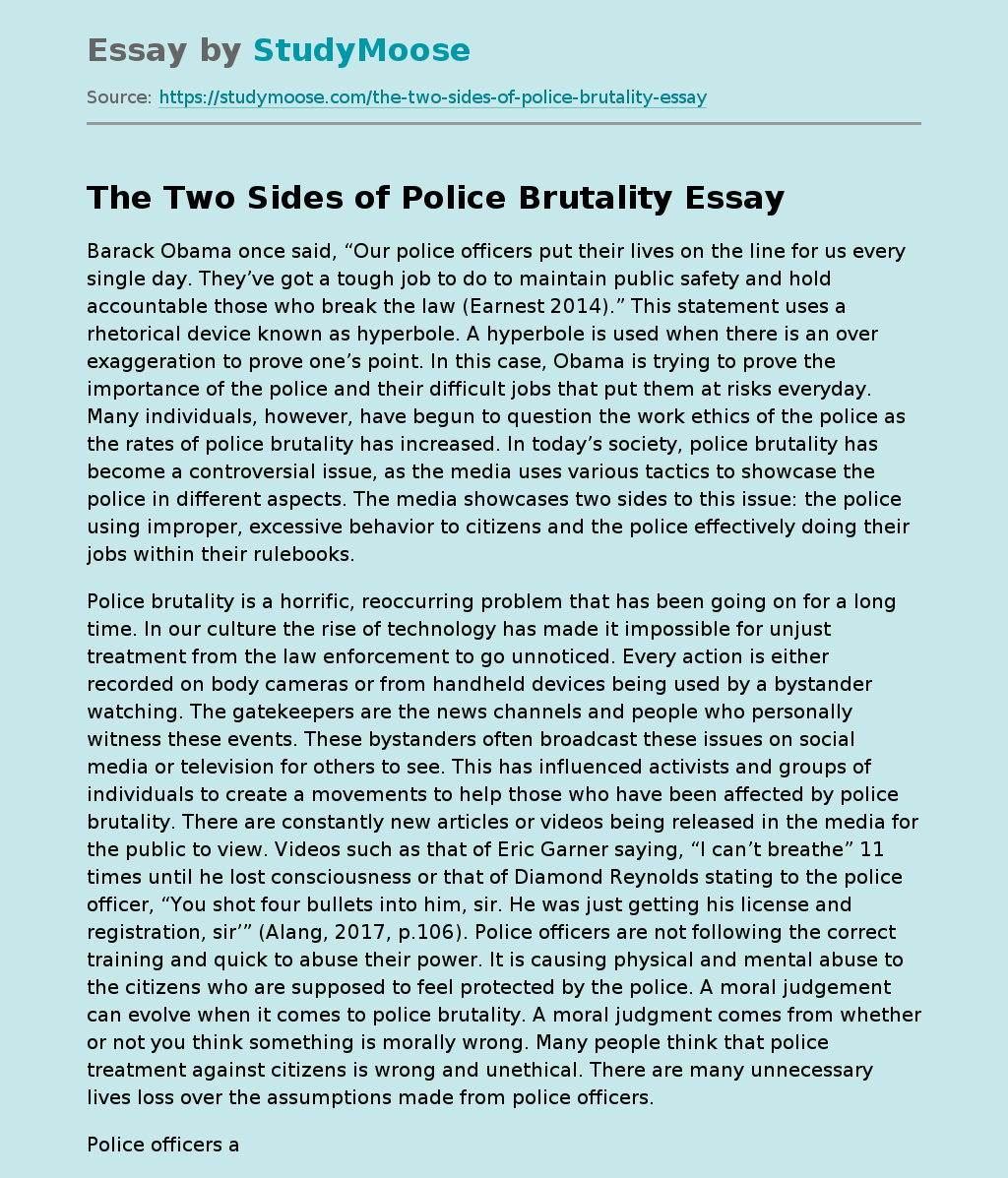