“How could the terrorists have sacrificed their own lives, and taken the lives of  thousands of others as well as causing such colossal destruction? What could lead them to justify in their own minds committing mass atrocities? This goes far beyond a debate over religious beliefs, to the very heart of human nature: what allows certain people to override any sense of community with their fellow human beings, and willfully cause death and destruction for the sake of a higher cause”

The above questions are stated by Dr.

Don't use plagiarized sources. Get your custom essay on
“ The True Believer Book Report ”
Get custom paper
NEW! smart matching with writer

Timothy J. Madigan in one of his writings as a reflection to the “The True Believer” book of Eric Hoffer while analyzing the September 11, 2001 attack in the United States of America by those who believe as terrorist who can also be called themselves crusaders, jihad followers, fanatics or True Believers.

The True Believer: Thoughts on the Nature on Mass Movements is the first book of Eric Hoffer and considered as his most successful manuscript.

It is then published and reached the crowd in 1951. A survivor of visually impairment during his childhood days, orphaned at an early age and once a veteran of Pearl Harbor, he called himself a longshoreman philosopher rather than intellectual author.

He has the talent and passion in writing that makes him to contribute more than ten books with a million volumes in the circulation, all of which are considered classic in Social Psychology. He achieves both enormous recognition and fair share of criticisms and judgments from the readers and booklover during his time.

A freethinker and a true lover of freedom, Eric Hoffer is given due honor and appreciation by the President of United States Ronald Reagan, and receives the Presidential Medal of Freedom in February 1983, three months just before he passed away.

The book The True Believer: Thoughts on the Nature on Mass Movements states the origin of true believers, demonstrates Fanaticism, exhibits analysis of the psychology of mass movements, and examines the parallelism of mass movements on early Christianism, Nationalism, Communism, modern day uprisings and even terror attacks. It successfully evaluates peculiar movements, specifically mass movements whether it is social revolutions, civil war, coup‘d etat, religious’ crusades and politically motivated movements.

It tells that a person is said to be a True Believer when this individual stresses his belief and can relinquish his exquisite eccentricity by expressing his own identity even for a violent cause. Eric shows in the book how people having the same state of mind, same types of mind relate with each other and form unusual norm of practicing their beliefs together as fanatics of something their passionately believe in one way or another. He believes that True Believers share the same thinking and ideas irregardless of its content, intent and motives.

Eric Hoffer says, “The fanatic is perpetually incomplete and insecure. He cannot generate self-assurance out of his individual resources or out of his rejected self, but finds it only by clinging passionately to whatever support he happens to embrace. This passionate attachment is the essence of his blind devotion and religiosity, and he sees in it the source of all virtue and strength. He easily sees himself as the supporter and defender of the holy cause to which he clings. And he is ready to sacrifice his life.”

If a man suffers from great depression, sooner or later he will experience burn out and later aspire sudden changes in life to prevail over the dilemma he has, and this desire for the transition depends upon the ideal which a man takes to believe in and fight for. A good intention might end up bad results. On the other hand, bad motives might be given fair judgments. Although it can easily be understood by most normal people, still, there are some instances that the consequence of anything a man does is sometimes more horrifying to realize; moreover, if it stake someone else’s lives other than him alone.

Religious practices are somewhat exaggerated somehow. The principle of good versus evil sometimes makes the person confused that will tend to practice wrong teachings, in which some instances even the most kindhearted churchgoer ridicule his own colleagues’ follies, in accordance to his standard or the church he belongs set and preach. It is all in the acceptance of a man to take the courage of dismantling his belief. No one is perfect to distinguish right from wrong, false from truth, evil from good, or even knowing the straight or curve path. No one even the true believer themselves.

The challenge now is how each one of us will fight against the True Believers and their wrong doings. It will be easily achieved by people who are cautious, independent, loves freedom of expression in a silent and not in a provocative manner, and practice individualism freely. Most of all, the bravery to defeat fanaticism and True Believers is by learning to disincline himself from his leader and inclination. 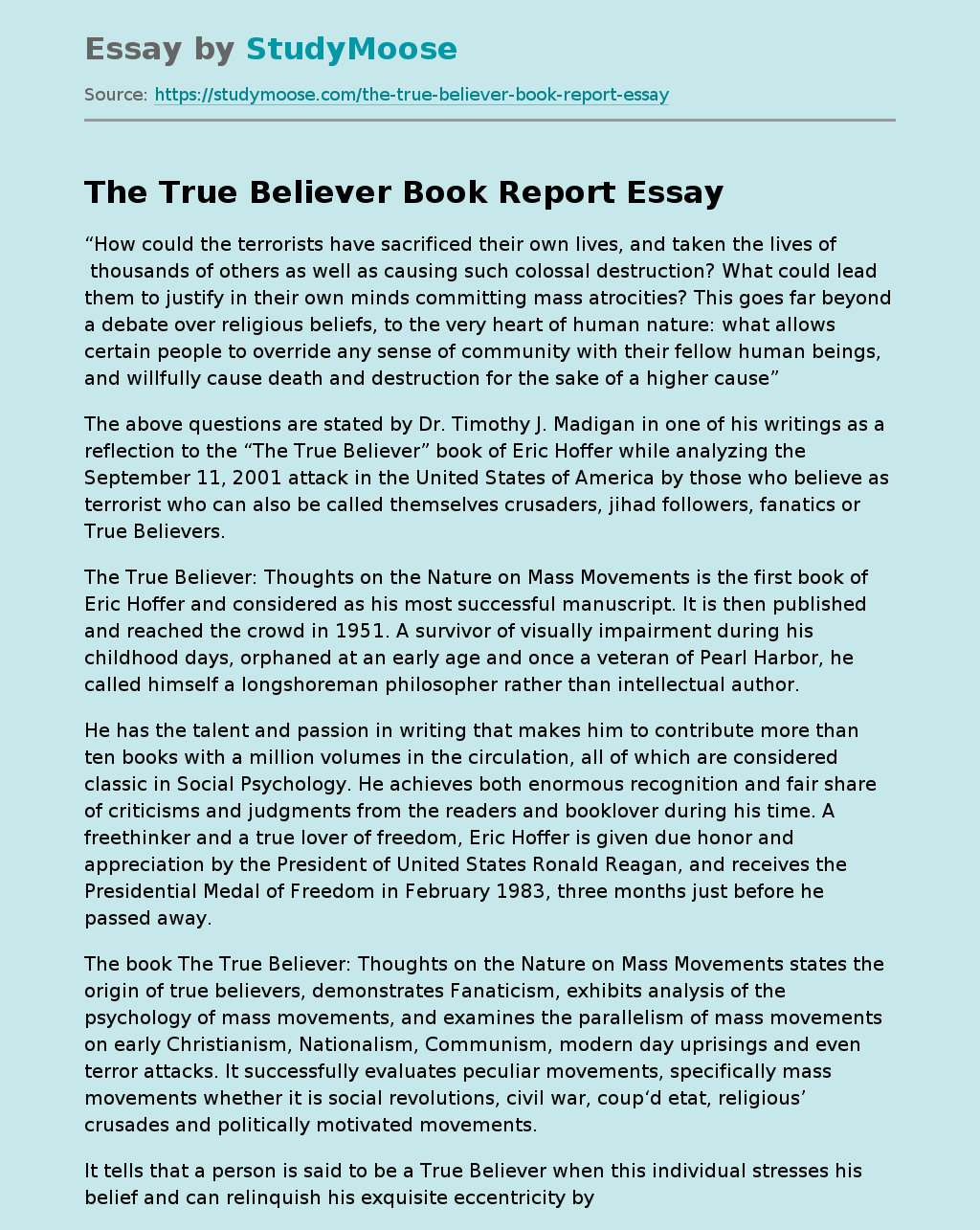