The trade networks between Africa and Eurasia from circa 300 CE to 1450 CE experienced many changes in their merchandise trade and who they traded with. Also, there were continuities involving their methods of trade. Among these changes and continuities technological advancements were made and cultural and political aspects were also affected.

At the beginning, there were primary trade routes and the exclusive trade they had. Primary trade routes were between Europe and North Africa and through the Indian Ocean. In Africa, soon Egypt rose in power and become an empire.

Don't use plagiarized sources. Get your custom essay on
“ The trade networks between Africa and Eurasia from 300 CE to 1450 CE ”
Get custom paper
NEW! smart matching with writer

It was at the top of the trade because of how much power and control it had. However, Eurasia was a combination of states in the Mughal Empire. Continuities that were established now were the involvement of the Northern coast of Africa, products of trade, and China’s treatment. African spices, Persian rugs, gold, salt, and indigo were traded along with the trade of religion, ideas, and cultural diffusion. China had the most uniform respect for its hierarchy and had very good treatment to its merchant class considering it greatly helped the economy.

Around the middle, there were new trade routes; rise and decline of empires, and new places were involved. A new trade route, the Silk Road traveled to and from India, Africa, and Western Europe. Because of the help the economy of Europe had from all this trade, it was once again stabilized as it had been reaching the decline of the Roman Empire. In contrast, the Islamic Empire rose and more regions were then available for trade.

Then, sub-Saharan Africa got involved in the trade and offered gold and salt as well. By this time, scholars from every place that was involved in trade was constantly gaining knowledge on many subjects. For example, the new technological advancements there were now saddles, caravans, and the compass.

In the end, it was visible how much the trade network had expanded which was a great change because it had gone from only the Northern coast of Africa to nearly the whole continent. The new areas were South, West, and sub-Saharan Africa. And it also led to new empires like Ghana and Mali. Luxury goods were also a great demand besides the normal spices and minerals. New luxury goods included silk, cotton, porcelain, coffee, and tea.

Overall, the changes and continuities that were made in the trade networks between Africa and Eurasia from circa 300 CE to 1450 CE were for the better. On both sides there were benefits such as expansion, technological advancements, and economic stabilization. 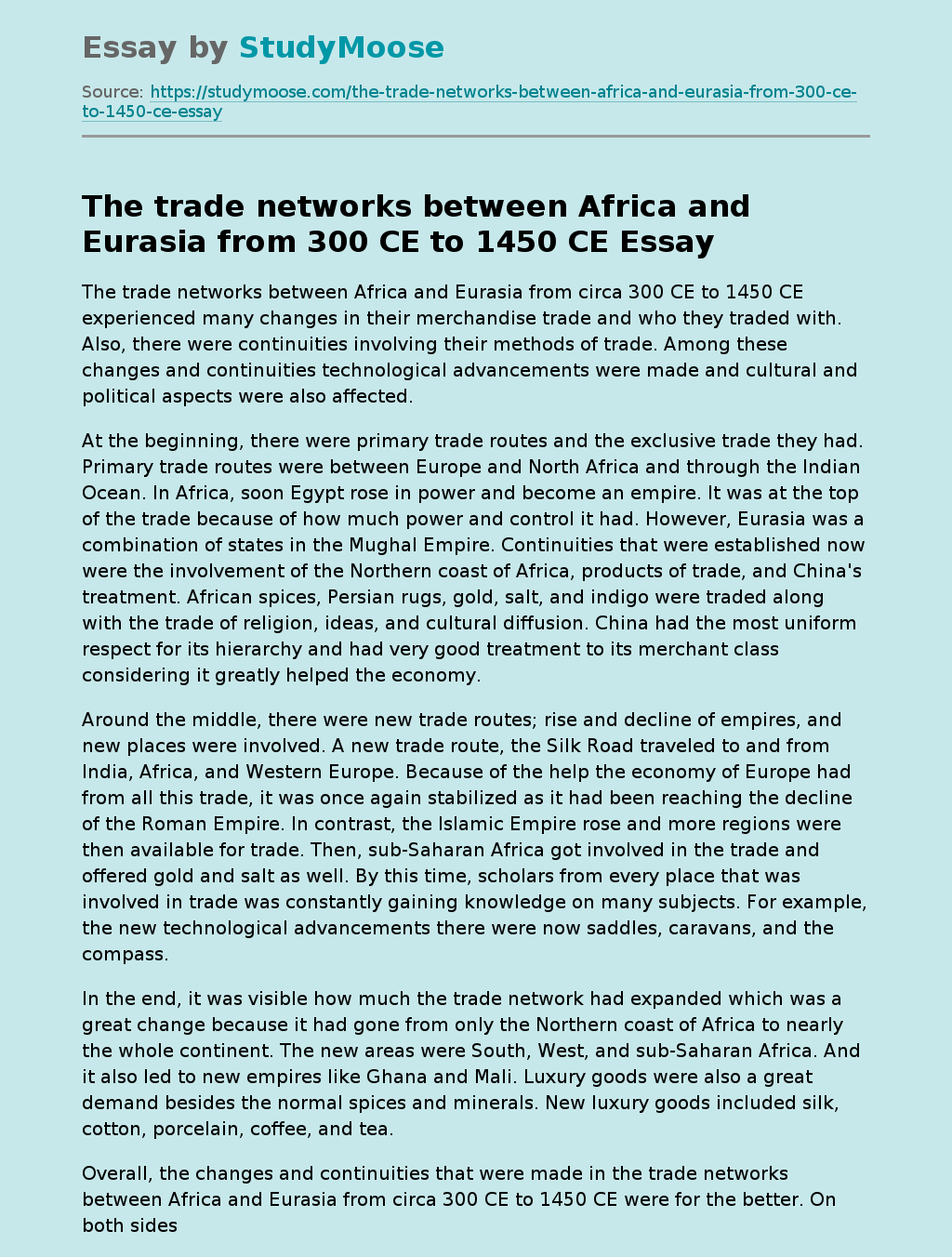