The topic of this research article is to extend a hypothesis called the species confidence hypothesis which states that birds are drawn to the colors on their bodies and reject colors that are not. In this study they have tested this hypothesis on non-avian reptiles suggesting these reptiles will be less fearful of the colors used during mating than those that are not. This preference for certain colors by these reptiles is impacted by humans in areas both humans and reptiles inhabit.

Don't use plagiarized sources. Get your custom essay on
“ The topic of this research article is to extend a hypothesis called ”
Get custom paper
NEW! smart matching with writer

This overexposure to color can have major impacts to the success of sexual mating and overall fitness of a species. The extension of the species confidence hypothesis predicted that Western fence lizards in southern California should be less fearful to humans wearing a darker shade of blue, the sexually-selected color of the lizards, compared to other colors being tested. They tested this extended hypothesis in areas with high and low human activity suggesting in high human activity areas the lizards will show reduced runaway responses compared to low activity areas.

Humans have made many impacts on this planet that show what we have accomplished, but also what we have destroyed. The data of this extended hypothesis will aid in giving possible explanations on human impact and the effects on the overall fitness of avian bird and non-avian reptile species.

The lizards were tested at two different locations in southern California in areas with high and low human activity while integrating the same type of environmental conditions. They also calculated the amount of human activity at these giving different variations in both locations.

This study used four different T-Shirt colors, two different shades of blue T-shirts which closely corresponded to the lizard’s ventral patches but are different to the human eye. Gray and red T-shirts were used to have a clear contrast in color from the types of blue presented. They used reflectance spectroscopy to find the wavelength and spectra of each T-shirt and the blue ventral patches on the adult male lizards, measuring the different regions of blue on the bodies of four adult male lizards. They also used an Ocean Optics spectrometer with a fiber optic reflectance probe on a 1.3mm region on the lizards. The determination of how closely the T-shirts corresponded to the lizards’ ventral blue patches, they used Vorobyev and Osario’s receptor noise model to find the different values in chromatic and luminance for each T-shirt and its closeness to the ventral blue patches on the lizards. The values they found, known as JNDs, were different giving a depiction of T-shirt color compared to the ventral patches on the lizards. A value less than one indicates that two regions can’t be discriminated while a higher value indicates a greater contrast. The apparentness of the T-shirts in the environment was found by taking pictures of a single person wearing T-shirts in each color at ten random locations. These photos were taken in direct sunlight to minimize the difference in lighting among the images taken. After these images were taken, they used Multispectral Image Calibration and Analysis Toolbox plugin to further analyze the images. The JNDs were then calculated into two different locations for the recordings of color and luminescence, which showed the values for chromatic and achromatic contrasts. Using a Weber fraction of 0.05 and assuming equal cone ratios on the lizards, the comparisons would help determine if the lizards reacted to changes in color.

The team’s analysis found was performed in R using the JND values to find which T-shirts were closest in affinity to the ventral blue patches of the lizards. The team analyzed their original hypothesis if the lizards would be reactive to T-shirt color, towards the end of their study, they found that likelihood of capture was correlated with decreased escape behavior. They found that sex had no determining factor in number of lizards captured. While analyzing their results of T-shirt color to the lizard’s blue regions, they found the two different shades of blue T-shirts being tested gave the lowest JNDs showing these blue T-shirts correspond to the lizard’s blue bodily regions with the lowest values of contrast and luminescence, while the red and grey T-shirts had high chromatic contrast values. The behavioral trials in table 1 show that T-shirt color did influence the distance at which the lizards ran away when being approached. Those who wore red T-shirts influenced the lizards to run a longer distance compared to the shades of blue T-shirts as they predicted before, the test showed that the level of human activity did not have an impact. Figures 2 and 3 are the bar graphs presented that show their closeness to their initial hypothesis with red T-shirts giving the highest value of distance fled when being approached followed by grey and both shades of blue.

The extension of the species comfort hypothesis in the Western fence lizards was a well-planned hypothesis using different T-shirt colors to gain comprehension of the lizard’s comfort using close colors that are already on their bodies. The study was performed in areas of high and low human activity with extensive lab work on color contrast and relative closeness in color and luminescence to the body regions of the lizards. They found similar results to their initial hypotheses that different shades of blue T-shirt corresponded to the blue regions on the lizards would exhibit the lizards are more comfortable with colors on their bodies, being both shade of blue, than other colors of red and grey. The examination their original hypothesis can help finalize that blue t-shirts the experimenters wore yielded less distance covered when the lizards fled and an increase in the number captured. This experiment has helped give reasoning to the extension of the species comfort hypothesis and its comparability to birds as well as the amount of comfort these animals have with colors that are self-portrayed.

The topic of this research article is to extend a hypothesis called. (2019, Dec 11). Retrieved from https://studymoose.com/the-topic-of-this-research-article-is-to-extend-a-hypothesis-called-example-essay 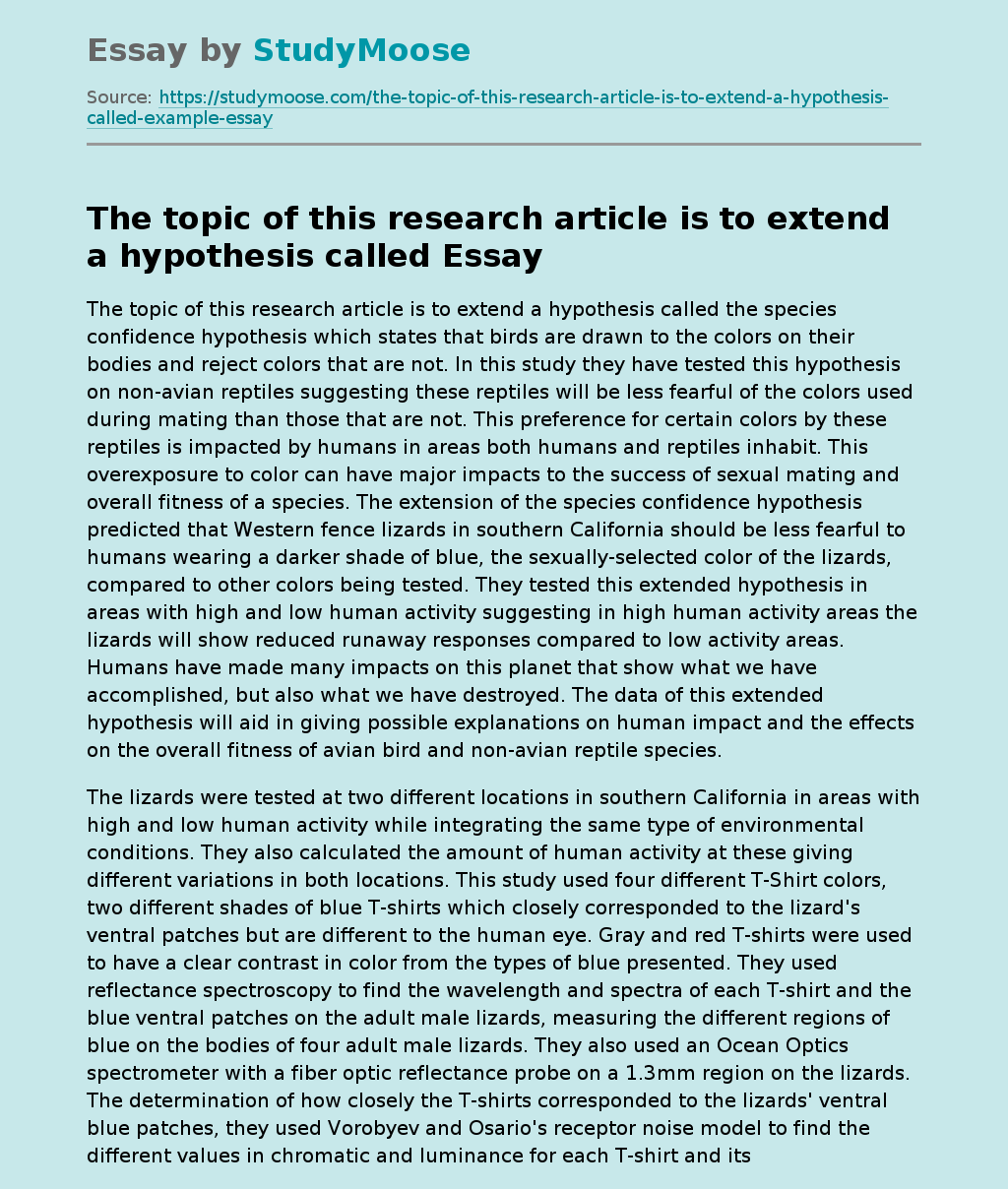