These are the last lines of the book The Teacher Man by the ever outstanding writer, Frank McCourt. These lines mark the beginning of McCourt’s flight as a writer. McCourt began earning world readership after he published Angela’s Ashes, my favourite of all his works. It became an award winning memoir as it highlighted the childhood life in Limerick, Ireland, revealing the painful course of experience he had when he was a kid, and the situation of his family on that time.

Don't use plagiarized sources. Get your custom essay on
“ The Teacher Man ”
Get custom paper
NEW! smart matching with writer

His second book ‘Tis came out as the sequel of Angela’s Ashes.

It is a magnificent piece, containing stories about his early years in New York. Though it is not as good as Angela’s Ashes but still it is a wonderful work of Frank McCourt. The Teacher Man is Frank McCourt’s third book. As a tribute to teachers, with all honesty and material from real experience, this book presents all the trials McCourt faced, the surprises he encountered, and the achievements he received in all the secondary schools in New York City where he used to worked at.

This book exposes what mostly happens inside a classroom; how the students work and what role their teachers play for them.

After reading Chapter 7, where the importance of the teachers is fleshed out, I learned that teachers don’t just teach; they also inspire their students and give them values which students will hold dear through time. Like the situation of Kevin, a bully student, McCourt made him show his true self and turned him into a good boy with a lively imagination.

This explains how teachers influence their students. They are indeed the second parents to guide their students to the right direction towards their future. Being a teacher is challenging.

Most of my life is spent and handled by teachers, year after year, and, I must say though they have different approaches in teaching, they had a hard time dealing with our attitudes and of the rest of their students, especially the high school students. Difficult as it may seem to handle a number of students with different personalities and levels of understanding, this challenge for them is to overcome always. Thus, of all professions that one has to choose and pursue, teaching is what I really respect the most. Without teachers, there would be no other professionals for teachers are those who mold people into becoming professionals.

McCourt decided to write literary piece only thirty years after he worked as a teacher. This pursuit can be analysed in two ways: from what sort of influence his students might have suggested on him and his teaching experience; or to the fact that Mr. McCourt was once a teacher and he should write a book about it. This re-representation of his life into a book explains also why he had to write a memoir about his childhood, his life in New York, and now, his life as once a teacher. I want to title this paper The End of the Beginning because after he retired from teaching, Frank McCourt started working on this book.

It is all about his life, retelling things that happened since his retirement. The book serves as a two-end account for that part of this life, because it is closing the stories, things he used to meddle while he was working as a teacher. Another, this may be an end to his writing. Considering his age, this memoir is his last record but the beginning, in a way, for readers who want to understand more about the realities he had. This book will move one’s heart as it does to a reader like me. At the age of 66, in 1996, Frank McCourt published his first book Angela’s Ashes.

In 1999, McCourt, at 69, published ‘Tis. It is remarkable that he was able to write good books at such age. I may not be a good writer, but I give credits to his patience, skills, and for being such an influential author. I like the way he writes his books for it’s like I am reading what exactly one says, as if I am the one who is talking in the book. The thought of reading a book doesn’t come into my mind. This means that any readers can really put themselves to the shoes of Frank McCourt. But if you ask me if The Teacher Man is a great literary piece as well? My answer again ‘TIS. 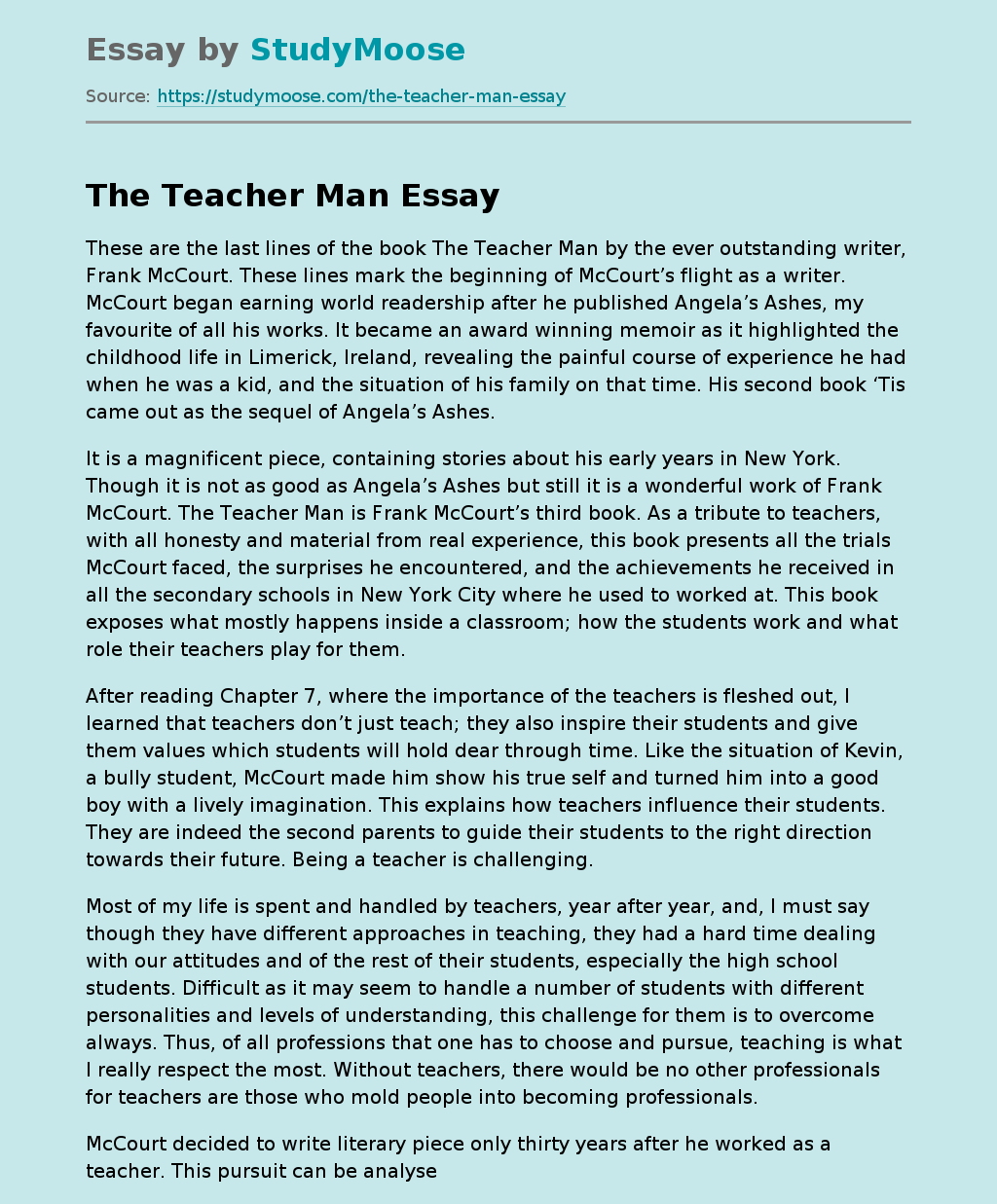