The Success of the Southwest Airlines Marketing Strategy

Southwest Airlines is the fourth largest major airline in the United States, flying more than 64 million passengers every year to 58 cities from the southwest and beyond. The company offers low fares to passengers, thereby achieving a huge market share in the airline industry. Although Southwest Airlines could be compared to Walmart in terms of its pricing strategy, the airline has not reached Walmart’s success yet, perhaps because it does not fly everywhere in the world. All the same, the airline wins award after award for finest quality in many departments, including Best On-Time Record, Best Baggage Handling, and Fewest Customer Complaints (Barlow; “Southwest Airlines’ Anne Murray”).

Don't use plagiarized sources. Get your custom essay on
“ The Success of the Southwest Airlines Marketing Strategy ”
Get custom paper
NEW! smart matching with writer

Southwest Airlines has relied on highly successful marketing strategies through its 30+ years old career. The company has partnered with highly lucrative organizations such as the NBA, with which it launched the Slam Dunk One aircraft in the year 2005 (“Southwest Airlines launches Slam Dunk One, an NBA-themed aircraft”). What is more, the company’s media campaigns to target the minorities, such as the African Americans and the Hispanics – have proved to be highly successful (Churchill).

The airline has about eighty percent of its employees in unions. This is the highest rate of union membership among the top ten U.S. airlines. Southwest Airlines also happens to be one of the top ten domestic carriers that has issued stock options to employees as part of standard compensation packages (Karrh). By making its employees satisfied thus, and an essential part of business success, the airline hopes to make them more motivated than usual to serve consumers well.

The company has also launched a website to increase its revenue through offline marketing. Meredith Levinson reported on the success of Southwest Airlines’ new strategy in the year 2001, following the September 11 attacks:

As a matter of fact, Southwest Airlines made $241 million in profit and $5.5 billion in sales in the year 2002, when all major airlines were incurring significant losses following the terrorist attacks on the American soil. According to E. Rasmusson, the success of Southwest Airlines despite terrorist threats related to aircrafts, clearly demonstrated the airline’s ability to inspire loyalty from its customers even during difficult times. Southwest Airlines does not only appeal to the minorities in the United States, but also to value-conscious and price-conscious businessmen and senior citizens of all races. The company markets itself as the only low-fare, short-haul, high frequency, point-to-point airline in America that is also fun to fly. Indeed, Southwest Airlines is famous for its humor on board (Barlow).

Besides, the company uses bad color schemes for its airplanes, only so that passengers would recognize Southwest planes while disregarding the faceless sort of aircrafts used by other carriers (Henderson). The airline is also known to use the word “love” as a promotional tool. While the word may appear strange in the context of an airline – in the case of Southwest Airlines, all of the above strategies have been successful at building brand loyalty for the carrier (Colvin).

As a result, every time Southwest Airlines enters a certain market, air fares in the market are observed to go down, tourist traffic is increased, and there is an economic boom experienced even by the airline’s competitors. Moreover, the airline is known to be petitioned by residents and politicians every ninety days with pleas to enter their city (Pounds and Weil).

The pricing strategy of Southwest Airlines is, of course, to charge the lowest possible fare while keeping its airline business profitable. In point of fact, the airline also claims to be competing with ground transportation! T. Barnstetter reported that at one point Southwest Airlines was charging $25 for a flight segment, while another carrier was charging $62 for the same route. One of the shareholders of Southwest Airlines approached Herb Kelleher, the chairman and CEO of the company to ask, “Don’t you think we could raise our prices just two or

three dollars?” “You don’t understand,” replied Kelleher. “We’re not competing with other airlines. We’re competing with ground transportation.”
The company believes in increasing the number of its flights as the market gets busier and demand increases for its product – travel. Southwest Airlines, unlike most other carriers, does not increase its prices in response to increased demand. This is yet another reason for the brand loyalty that the carrier has developed for itself (Barlow). In addition, the company does not rely on travel agents to distribute its products.

Directing marketing is the main force behind Southwest Airlines’ increasing market share. By phone and through the Internet, the reservation agents of Southwest Airlines ensure that the passengers are provided quality service and there is no compromise whatsoever in terms of customer service quality and low fares (Miller). What is more, Southwest Airlines never partners with other airlines to offer joint affairs. By keeping its marketing position unique, the company has benefited enormously (Barlow).

In January 1995, Southwest Airlines became the first major carrier to introduce a Ticketless Travel option to all passengers. By so doing, the company reduced its costs besides making it more convenient for its passengers to travel without the hassle of safekeeping of tickets. In the case of Ticketless Travel, passengers need only show up for a flight with a confirmation number.

The airline is actually the first to sell its product through the ATVM, which is essentially used by passengers like an ATM to purchase tickets by simply choosing a destination city and swiping a credit card. This makes it even more convenient for passengers to use Southwest Airlines as their preferred carrier instead of other airlines that require either online reservation or a phone call (Harrison). Business passengers, for whom time is money, are especially lured by this strategy of Southwest Airlines.

The frequent flyer program of Southwest Airlines is also different from such programs used by other airlines. In the case of Rapid Rewards – Southwest Airlines’ frequent flyer program – passengers may be rewarded for the number of trips taken rather than the number of miles traveled. “Three trips, and the fourth is free” is the way this program works. Additionally, this program does not only appeal to affluent passengers who are able to earn many rewards for miles traveled, but also to those passengers who approach the carrier mainly because of its low fares.

These passengers have been invited by print and television advertisements used by Southwest Airlines to visit the website of the carrier for the best online deals. This strategy repels the competitive efforts of online ticket discounters, besides encouraging both the affluent and not so affluent classes of American society to travel with one of the best, and the cheapest airline in the country (De Lollis).

Southwest Airlines has additionally been known to run ads that target online ticket discounters such as Expedia.com, Priceline.com, and Lowestfare.com in order to say to its own loyal consumers: Do not believe the hype (De Lollis). Indeed, Southwest Airlines continues to advertise itself as the lowest possible fare carrier thus, and consumers are quick to give in to its messages. This is also because the company attempts to intrigue, entertain, and persuade people through its unique advertisements of fun and personality (Barlow).

Because a lot of its consumers are male, Southwest Airlines believes in sports advertising not only through partnering with NBA, but also through its sponsorship agreement with NFL. In fact, Southwest Airlines is the official airline of the NFL, thereby making it more attractive for sport lovers to “love” the carrier. Moreover, the airline runs spots on sports programming, for example, Monday Night Football. Seeing that three out of four NFL ads are targeted to women, Southwest Airlines is also successful through its agreement with NFL at targeting female passengers (Barnstetter). Furthermore, the company has been seen to use aggressive television advertising to target business people in particular (Callahan).

There truly appears no end to the success of Southwest Airlines. The carrier has partnered with Sea World to create Shamu One, Shamu Two, and Shamu Three out of its aircraft. In addition, it has attracted state-wide publicity by naming its airplanes Arizona One, California One, Nevada One, and New Mexico One. As a result of its marketing efforts, there is virtually nobody in the United States that does not know about Southwest Airlines.

Further, the airline wins favorable publicity because of its support of the Affirmative Action Hiring Program (Shoneberger). Because of such practices, the airline wins the support of the whole melting pot of America. Lastly, the company’s philosophy of “Service for Smiles and Profits” works wonders for its employees who are encouraged to treat customer service as the most important part of their job. Indeed, this philosophy works as successfully for the company as does its marketing strategy.

The Success of the Southwest Airlines Marketing Strategy. (2017, Mar 20). Retrieved from http://studymoose.com/the-success-of-the-southwest-airlines-marketing-strategy-essay 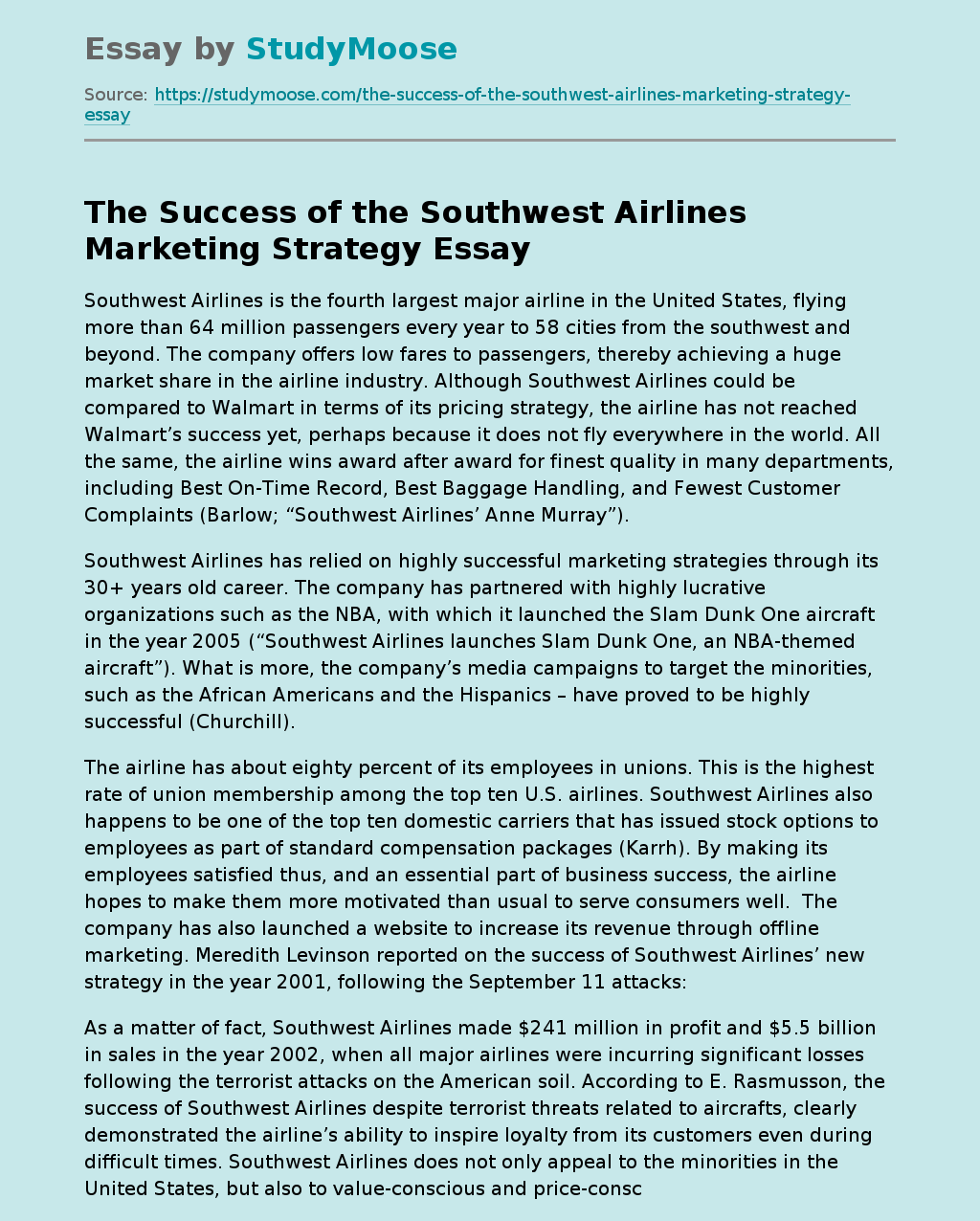