In “The Speckled Band” there are very few suspects, which makes the reader wonder, not who, but how? The way Roylott is described suggests he may be the perpetrator, and we find that as his character builds, he becomes more sinister. Such descriptions as “… seared with a thousand wrinkles, burned yellow with the sun, and marked with every evil passion… ” are consistently used. We are intrigued by Roylotts pets, which are also suspects, but turn out to be nothing but red herrings.

Don't use plagiarized sources. Get your custom essay on
“ Research Paper on Speckled Band ”
Get custom paper
NEW! smart matching with writer

The gipsies also fulfil this role, as their headgear suggests that they may be involved in the crime.

Their scarves are described as ‘speckled bands’ and so Holmes follows up on this lead, but finds it a red herring, in compliance with a convention. Roylott may be described as an eccentric, because he keeps strange pets, and lives on his own. He keeps a snake as well, and the equipment for its keeping is a vital clue. “He broke into a low laugh … That is the baboon.

” The di?? nouement unusually occurs after the death of Roylott, and gives the reader an insight into the deductive process in Holmes’ brain. Holmes explains the case to Ms Stoner, and Watson, who are somewhat baffled as to how he solved the crime.

Normally in stereotypical stories, all the suspects are gathered together, and the detective tells them who the criminal is. Is Justice served? – It is somewhat unconventional, but the reader feels satisfied that Roylott has had his ‘come-uppance’ Holmes feels that he has done his job, and Watson is still confused as to how Holmes has performed yet another astounding discovery.

“Visitors” relies on the reader’s knowledge of the genre, and the fact that the conventions are well known. “Visitors” does not conform, but subverts the reader’s expectations of the story. There is no mystery.

The criminals give a knock on the door and say “Morning Madam, This is a robbery. ” There is no surprise, and no mystery. The facts are presented to us in the first place, to make us wonder – what has happened to this story? Instead of what has happened in this story? We are further intrigued as to the fact that the ‘robbers’ are invited in. The language used suggests a feeling of resignation on the victims part, as if this was a necessary process. The crime is a robbery, but not as we know it. As mentioned above, the robbers programme of events is clearly spread before us.

They have carefully planned what they will do, and know the locations of phones, electricity, etc… The robbers are dressed and act like businessmen. As the story progress’ we find that in fact they are. There is no detective in this story. The story has already been solved, so there is no need for a detective. We, the reader are expected to work out what has happened to the story, and not who has committed a crime. The robbers have obviously committed the crime, but have committed it in such a way, as to astound the reader.

Overall, the story is very confusing, and this adds to the confusion. The would be detective (as there is none) has no confidant. We are expected to work out the problems on our own, and receive no help even though there are rapid plot twists. The robber has his confidants, his ‘assistants’ in his business that serve the same function as Watson in “The Speckled Band”, although he is employed for bad and not for good. The explanation of what has happened is given to Mrs. Morrison, and in a reversal of the normal conventions, is given to her before the crime takes place, and during the crime.

The role of the police in this story is one of mystery. After the robbers have departed, leaving everything tidy, a battered car arrives and policemen jump out. They are totally aware of the situation, and have called round without summons. They are very inferior and incompetent, (but not for the same reasons as in “The Speckled Band”) and seem to have had a role reversal compared to today’s standards. They act like the robbers and the robbers act like the police. The language used is very contrasting as well. The robbers are formal and polite.

“Morning Madam” and “”We’d like to put you in the picture first” are constantly used, whereas the robbers use language like “Police, Mrs Morrison. Understand you’ve been robbed… ” Basically there is no investigation. There are no clues, and no suspects. We are given all the necessary details required to solve the crime. And yet, as I keep repeating, there is no crime. Burglary is now legal, so the story cannot really be about a crime. Everything in the story is unfamiliar. All the conventions of the story are upside down and back-to-front. The villain are not what we expect.

They are respectable men, dressed in suits, that politely knock on the door and inform you of the current situation. There is no argument, and no violence. It is all planned. As Holmes in “The Speckled Band” has a brilliant mind, so do the robbers. They have got everything written down, and have made every effort to make sure the experience is as uncomfortable as possible. They are organised and very persuasive. As with the investigation, there is no di?? nouement as such, because the crime has already been explained to us. We are left to piece together the story into a loose order and draw our own conclusions.

“The Speckled Band” and “Visitors” reflect the crime situation of their eras. The attitudes to crime differ greatly over time, and have been reflected in the stories. In the 19th century, the attitudes to crime were defined well. Citizens were aware of what was right and wrong, and the punishments for their crimes. That was the world of Conan Doyle. In today’s world, these attitudes have become blurred, with the introduction of psychology in the field. Instead of being convicted. Some people are sent to mental institutions and some are deemed medically unwell.

This way of investigation was not used in Conan Doyle’s era, so if Holmes had found someone guilty, he was guilty. This is not the case in Visitors. Circumstances ‘beyond control’ have forced the government to legalise robbery, therefore blurring the boundaries further. If Holmes had existed today, he would have found his job ten times more difficult because of the factors mentioned. “Visitors” and “The Speckled Band” show the diversity that an author uses to create a novel of the same type. The conventions used are bent to the era of which the stories were written, and make sure the reader has a very interesting story. 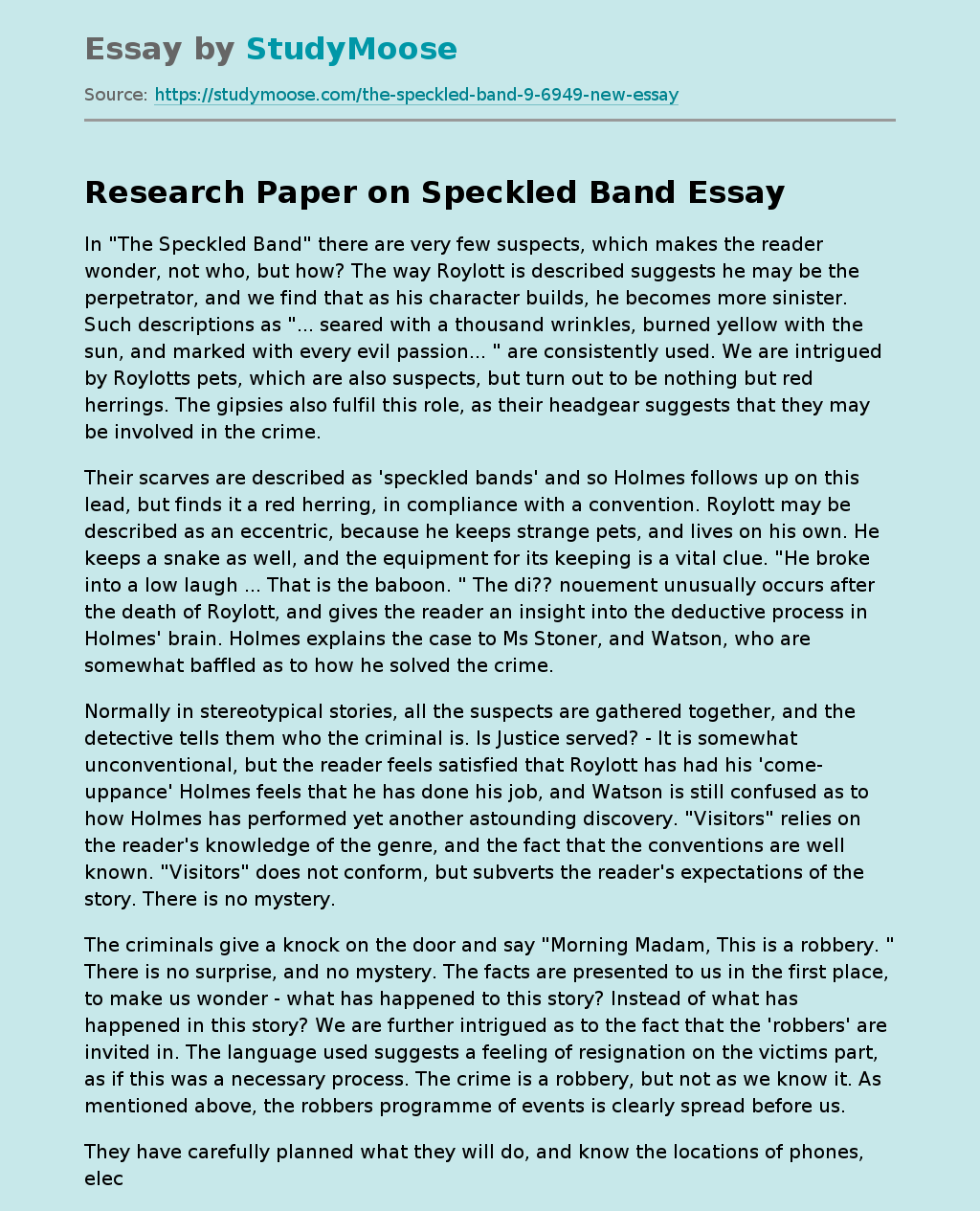