The six major elements of fiction

The six major elements of fiction are character, plot, point of view, setting, style, and theme. 1. Character — A figure in a literary work (personality, gender, age, etc). E. M. Forester makes a distinction between flat and round characters. Flat characters are types or caricatures defined by a single idea of quality, whereas round characters have the three-dimensional complexity of real people. 2. Plot –- the major events that move the action in a narrative. It is the sequence of major events in a story, usually in a cause-effect relation.

Don't use plagiarized sources. Get your custom essay on
“ The six major elements of fiction ”
Get custom paper
NEW! smart matching with writer

Third –person narratives come in two types: omniscient and limited. An author taking an omniscient point of view assumes the vantage point of an all-knowing narrator able not only to recount the action thoroughly and reliably but also to enter the mind of any character in the work or any time in order to reveal his or her thoughts, feelings, and beliefs directly to the reader.

An author using the limited point of view recounts the story through the eyes of a single character (or occasionally more than one, but not all or the narrator would be an omniscient narrator). 4. Setting –- That combination of place, historical time, and social milieu that provides the general background for the characters and plot of a literary work.

The general setting of a work may differ from the specific setting of an individual scene or event. 5.Style — The author’s type of diction (choice of words), syntax (arrangement of words), and other linguistic features of a work. 6. Theme(s) — The central and dominating idea (or ideas) in a literary work. The term also indicates a message or moral implicit in any work of art.

What is the connection of Literature to the history?

The main connection between literature and history is that literature is used to report and represent history. The two are, therefore, intertwined with one another. The biggest difference between literature and history is that the latter posits itself as fact, while the former is taken to be an artistic form. The twin ideas of fact and entertainment intertwine often within literature and history to produce historical fiction and narrative non-fiction. Literature takes many forms. They range from personal notes to poems and non-fiction articles. Literature can be presented in a number of mediums including online content, magazine and newspaper articles and in book form. For a work to be considered literary, it usually requires artistic merit and quality.

What constitutes as literary is a subjective matter and rarely agreed upon. History at its most basic is the story of humanity. This is divided into anthropology,archaeology and history. History is the story of man’s representation of his own story — that is to say, what people through the ages have chosen to record and write down. Literature and history both occur in numerous forms, from tax records and letters to full histories of whole nations and people.

Anthropology is the scientific study and analysis of human beings and humanity. Archaeology is the discipline of excavating old artifacts and buildings to learn more about human history. It is often considered a type of science, though it is based more on interpretation and cross-comparisons than hypothesis-making and experimentation.

Francisco Arcellana, writer, poet, essayist, critic, journalist and teacher, is one of the most important progenitors of the modern Filipino short story in English. He pioneered the development of the short story as a lyrical prose-poetic form. For Arcellana, the pride of fiction is “that it is able to render truth, that is able to present reality”. Arcellana has kept alive the experimental tradition in fiction, and has been most daring in exploring new literary forms to express the sensibility of the Filipino people. A brilliant craftsman, his works are now an indispensable part of a tertiary-level-syllabi all over the country. Arcellana’s published books areSelected Stories (1962), Poetry and Politics: The State of Original

Writing in English in the Philippines Today (1977), The Francisco Arcellana Sampler (1990). Some of his short stories are Frankie, The Man Who Would Be Poe, Death in a Factory, Lina, A Clown Remembers, Divided by Two, and his poems beingThe Other Woman, This Being the Third Poem This Poem is for Mathilda,To Touch You and I Touched Her, among others.

Nestor Vicente Madali Gonzalez, better known as N.V.M. Gonzalez, fictionist, essayist, poet, and teacher, articulated the Filipino spirit in rural, urban landscapes. Among the many recognitions, he won the First Commonwealth Literary Contest in 1940, received the Republic Cultural Heritage Award in 1960 and the Gawad CCP Para sa Sining in 1990. The awards attest to his triumph in appropriating the English language to express, reflect and shape Philippine culture and Philippine sensibility. He became U.P.’s International-Writer-In-Residence and a member of the Board of Advisers of the U.P. Creative Writing Center. In 1987, U.P. conferred on him the Doctor of Humane Letters, honoris causa, its highest academic recognition.

Nick Joaquin, is regarded by many as the most distinguished Filipino writer in English writing so variedly and so well about so many aspects of the Filipino. Nick Joaquin has also enriched the English language with critics coining “Joaquinesque” to describe his baroque Spanish-flavored English or his reinventions of English based on Filipinisms. Aside from his handling of language, Bienvenido Lumbera writes that Nick Joaquin’s significance in Philippine literature involves his exploration of the Philippine colonial past under Spain and his probing into the psychology of social changes as seen by the young, as exemplified in stories such as Doña Jeronima, Candido’s Apocalypse and The Order of Melchizedek. Nick Joaquin has written plays, novels, poems, short stories and essays including reportage and journalism. As a journalist, Nick Joaquin uses the nome de guerreQuijano de Manila but whether he is writing literature or journalism, fellow National Artist Francisco Arcellana opines that “it is always of the highest skill and quality”.

Among his voluminous works are The Woman Who Had Two Navels, A Portrait of the Artist as Filipino, Manila, My Manila: A History for the Young, The Ballad of the Five Battles, Rizal in Saga, Almanac for Manileños, Cave and Shadows.

F. Sionil Jose’s writings since the late 60s, when taken collectively can best be described as epic. Its sheer volume puts him on the forefront of Philippine writing in English. But ultimately, it is the consistent espousal of the aspirations of the Filipino–for national sovereignty and social justice–that guarantees the value of his oeuvre. In the five-novel masterpiece, the Rosales saga, consisting of The Pretenders, Tree, My Brother, My Executioner, Mass, and Po-on, he captures the sweep of Philippine history while simultaneously narrating the lives of generations of the Samsons whose personal lives intertwine with the social struggles of the nation. Because of their international appeal, his works, including his many short stories, have been published and translated into various languages.

Jose is also a publisher, lecturer on cultural issues, and the founder of the Philippine chapter of the international organization PEN. He was bestowed the CCP Centennial Honors for the Arts in 1999; the Outstanding Fulbrighters Award for Literature in 1988; and the Ramon Magsaysay Award for Journalism, Literature, and Creative Communication Arts in 1980.

Carlos P. Romulo’s multifaceted career spanned 50 years of public service as educator, soldier, university president, journalist and diplomat. It is common knowledge that he was the first Asian president of the United Nations General Assembly, then Philippine Ambassador to Washington, D.C., and later minister of foreign affairs. Essentially though, Romulo was very much into writing: he was a reporter at 16, a newspaper editor by the age of 20, and a publisher at 32. He was the only Asian to win America’s coveted Pulitzer Prize in Journalism for a series of articles predicting the outbreak of World War II. Romulo, in all, wrote and published 18 books, a range of literary works which included The United(novel), I Walked with Heroes (autobiography), I Saw the Fall of the Philippines, Mother America, I See the Philippines Rise (war-time memoirs).

His other books include his memoirs of his many years’ affiliations with United Nations (UN), Forty Years: A Third World Soldier at the UN, and The Philippine Presidents, his oral history of his experiences serving all the Philippine presidents.

Alejandro Roces, is a short story writer and essayist, and considered as the country’s best writer of comic short stories. He is known for his widely anthologized “My Brother’s Peculiar Chicken.” In his innumerable newspaper columns, he has always focused on the neglected aspects of the Filipino cultural heritage. His works have been published in various international magazines and has received national and international awards.

Ever the champion of Filipino cultures, Roces brought to public attention the aesthetics of the country’s fiestas. He was instrumental in popularizing several local fiestas, notably, Moriones and Ati-atihan. He personally led the campaign to change the country’s Independence Day from July 4 to June 12, and caused the change of language from English to Filipino in the country’s stamps, currency and passports, and recovered Jose Rizal’s manuscripts when they were stolen from the National Archives.

His unflinching love of country led him to become a guerilla during the Second World War, to defy martial law and to found the major opposition party under the dictatorship. His works have been published in various international magazines and received numerous national and international awards, including several decorations from various governments.

The six major elements of fiction. (2016, Apr 03). Retrieved from https://studymoose.com/the-six-major-elements-of-fiction-essay 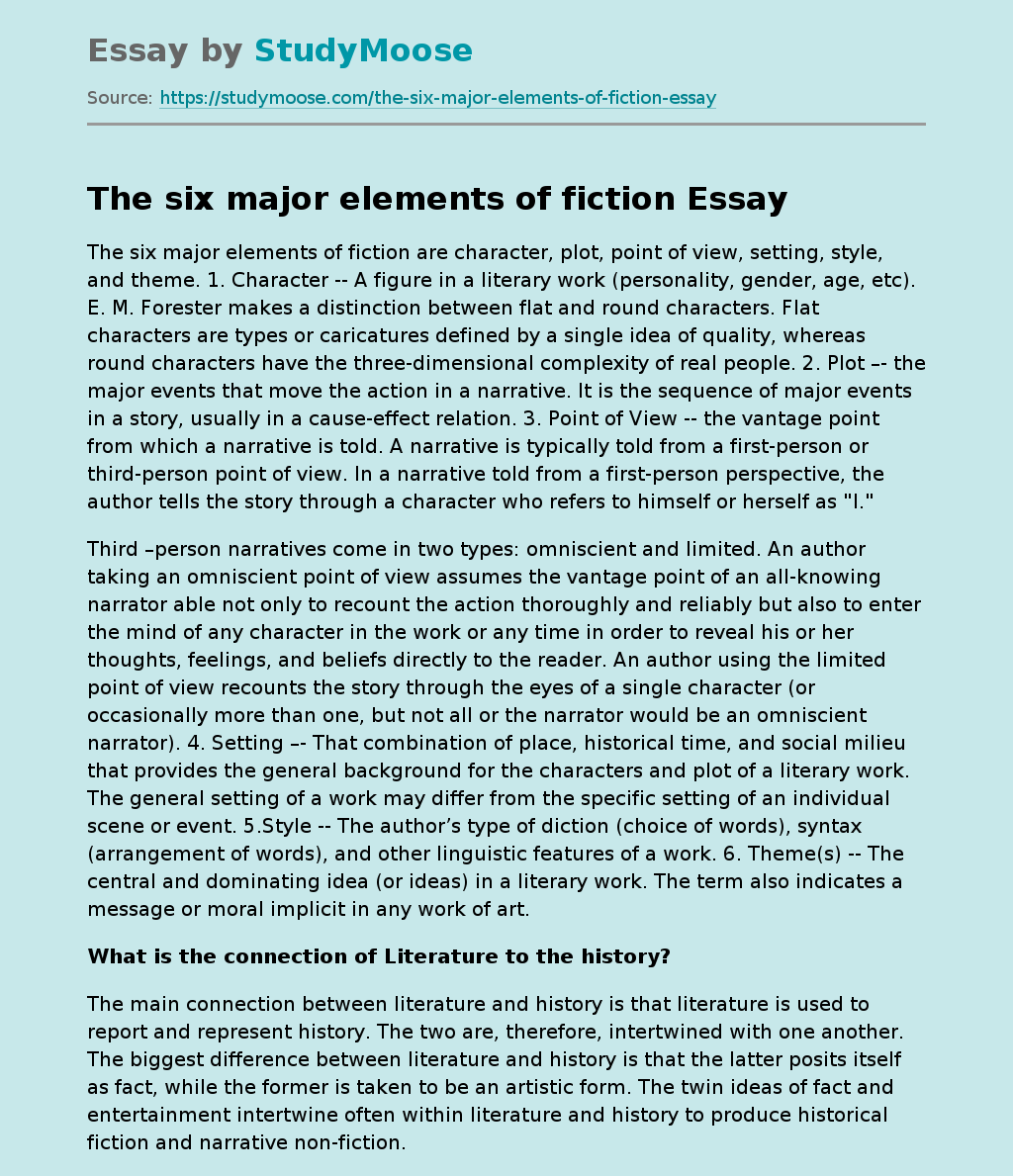