The Six Forms of Punishment

Don't use plagiarized sources. Get your custom essay on
“ The Six Forms of Punishment ”
Get custom paper
NEW! smart matching with writer

If the crime is minor they will most likely be given probation or community service. They will also might have to pay the restitution for the wrong that was done. The people who determine and sentence people is the criminal statutes. The crime being minor will most likely get community service or pay the restitution. If the crime is more serious and that person has a record already that’s how the court determines there sentencing.

Like for instance if that person has a record and committed the same crime the punishment will be more severe. The court takes into account how serious the crime is and if it can be sentenced to the courts discretion going by the books. Sentencing is a very important part in the criminal justice system. It is the punishments defendants receive when they have committed a crime. The punishment is wide and vast, ranging from probation to death. The relationship between sentencing and punishment is that they both work together.

The reason is the sentencing will decide what type of punishment that person will receive. When somebody commits a crime they will receive punishment depending on the type of crime they committed. Indeterminate sentencing is a punishment that encourages rehabilitation through the use of genera l and relatively unspecific sentences, such as a term of imprisonment of from one to ten years. Indeterminate sentencing has both a historical and philosophical basis if participation will reduce the amount of time they have to spend in prison. If an inmate is doing good behavior they will be released early, while recalcitrant inmates will remain in prison until the end of their terms.

There are many types of sentencing’s and the punishment is depending on what sentence they give you. That’s why They punishment have certain things in common with the sentencing. The way I believe that we can modify the sentencing process is by looking at the records of the defendant and the level of crime he committed. Like for example if a person would commit a serious crime like murder or rape they should get the most time and punishment even if it’s there first time. The reason being so is that when a crime like that was committed they ruin people and family’s lives forever. They didn’t think about that aspect in life and should deserve the worst in the sentencing. I also believe that no good behavior should play in that there role because of the crime that was committed. They didn’t think about ruining those family and friends so the judge should not shed any light on them. There have been a couple of cases were some criminals who did some serious crime like rape and get out of prison early. When that happens it makes the victim feel unsafe and probably also feel like it will happen again. I have seen people in the news and real life when they are told or found out that the criminal is out of jail and freed really early because of good behavior. That’s why I believe they should look into that more and make it more strict on the criminals that commit these types of crimes.

The Six Forms of Punishment. (2016, Mar 22). Retrieved from http://studymoose.com/the-six-forms-of-punishment-essay 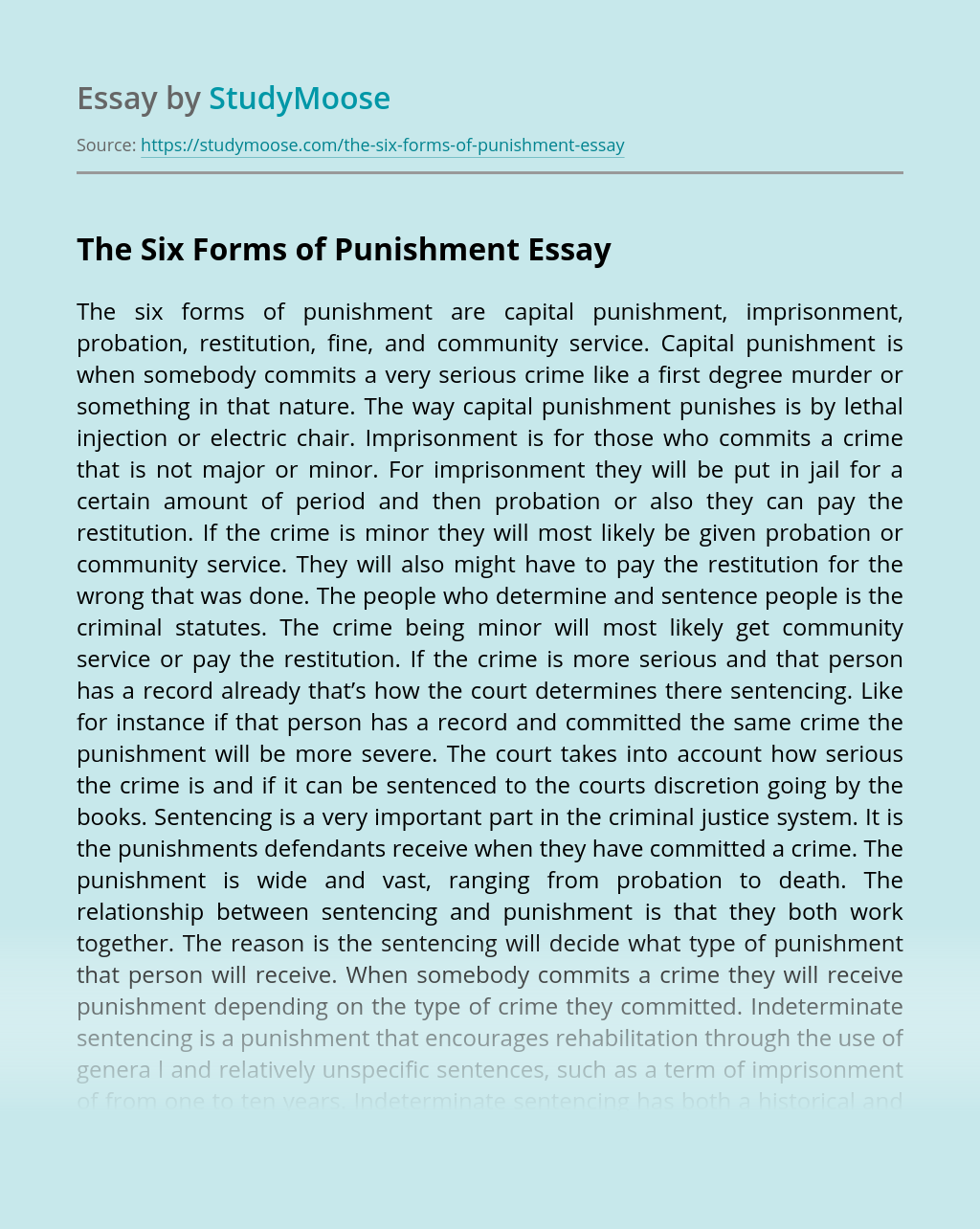