The Simpsons, Hyper-Irony, and the Meaning of Life

Carl Matheson, in his essay The Simpsons, Hyper-Irony, and the Meaning of Life suggests the formula that made The Simpsons the successful comedy that it is, lasting for almost 18 years and going strong. It has even duplicated its success in the big screen when it opened at number one for Simpsons the Movie. He believes he has pinned it down and labeled them a quotationalism and hyper-ironism. He opines that today’s comedies are wrought with these, The Simpsons most especially.

Turn in your highest-quality paper
Get a qualified writer to help you with
“ The Simpsons, Hyper-Irony, and the Meaning of Life ”
Get high-quality paper
NEW! AI matching with writer

He went on to draw on episodes selected from out of the more than 400 episodes of the show to prove his statements.

He defined quotationalism in the context of comedy as “essentially depend(ent) on the device referring to or quoting other works of popular culture. ” Let is look into the background of the show. The Simpsons is a half-hour comedy created by Matt Groening with the first episode aired on the Fox network on December 17, 1989. It featured :the first mainstream animate characters who drank beer to excess, bet the family savings on dog track and said ‘damn’, ‘hell’, and ‘ass’ like the rest of us” (Apter 5).

It quickly soared up the ratings charts and consistently dubbed a one of the best television shows.

According to Matheson, quotationalism in The Simpsons is used in a more mature form compared to earlier comedy shows in that “they are very funny,” that “they are allusion,” and that “the most impressive feature of this pattern of allusion is in its pace and density.

” He sees this as a deficiency in the show’s formatting. However, this is actually the characteristic that is simultaneously praised by its fans and derided by its detractors. Those who get the in-joke proclaim it as “the smartest show on television” (Apter 5) and on the other side derided as coarse and “perverts our society or…

Reflects the inherently perverted nature of our society” (Yenter 1). Being a cartoon somehow gives it license to be able to say things unimaginable for other shows with real life actors and when it makes serious political points, it is always successful in making it funny rather than horribly derisive and sad. Moreover, it’s never biased or predictable. Nothing and no one escapes notice – the two-party system, the educational system, the local government, the corporation, the immigrants, gay rights, religious denominations, and even the Fox network.

Matheson’s other device label is hyper-ironism which he used to describe comedy as “the humor offered… is colder, based less on a shared sense of humanity than on a sense of world-weary cleverer-than-thou-ness. ” To give his thesis a sense of academic credibility, he went on further to use phases in painting, science and philosophy as a standpoint for the phenomenon (of The Simpsons) as a “crisis of authority” where “hyper-ironism is the best form of comedy. ” However, I agree with his position that the show “does not promote anything…

Because its humor works by putting forward positions only in order to undercut them” although I disagree that it is a product of a crisis in authority. The Simpsons is a parody. The characters were developed so that they are perfect foils for each other. Homer is the best parody of them all. He was made into a fool to in order to mock shortcomings and simplify them. Bart is the underachiever brat who exists to question all authority. Lisa is the rational voice, Marge the heart and Maggie is the neutral, pacifier-sucking, quiet and forgotten Simpson who, if we are to compare with society, is the silent majority.

One of the characters will present an issue and the others are there to oppose and question it. An episode ends with either a decision or it just ends. Take the “Cartridge Family” episode which dealt with gun rights. Marge: Mmm! No! [pulls gun from Homer] No one’s using this gun! The TV said you’re 58 percent more likely to shoot a family member than an intruder! Homer: TV said that? But I have a gun! It’s in the Constituion! Lisa: Dad! The Second Amendment is just a remnant from the revolutionary days. It has no meaning today! Homer: You couldn’t be more wrong, Lisa.

If I don’t have this gun, the king of England could just walk in here anytime he wants and start shoving you around. [pushing Lisa] Do you want that? [pushing her harder] Huh? Do you? Lisa: [quietly indignant] No. Homer: All right, then. (cited in Goldberg, 2000). Regardless, virtually every episode of the The Simpsons ends on an uplifting note where’s Homer’s authority is affirmed firm, though barely, and family bonds are strengthened. Matheson criticizes this saying that when the show does this, it ceases to be funny and that “the heart-warming family endings help The Simpsons to live on as a series.

” There is a semblance of truth in this statement as society likewise constantly needs some redeeming value to persuade itself to live on (Tingleff, 1998). The hyper-irony is most evident, however, in Matheson’s essay itself. He lambasts The Simpsons’ comedy, paints a no-so-pretty picture and contradicts himself by categorically stating in his last paragraph “we love them” anyway. In future comedies, we should then expect that The Simpsons will fall under the pop culture category and will oft be quoted for its “Worst. Episode. Ever. ” D’oh! Works Cited

The Simpsons, Hyper-Irony, and the Meaning of Life. (2016, Sep 02). Retrieved from https://studymoose.com/the-simpsons-hyper-irony-and-the-meaning-of-life-essay 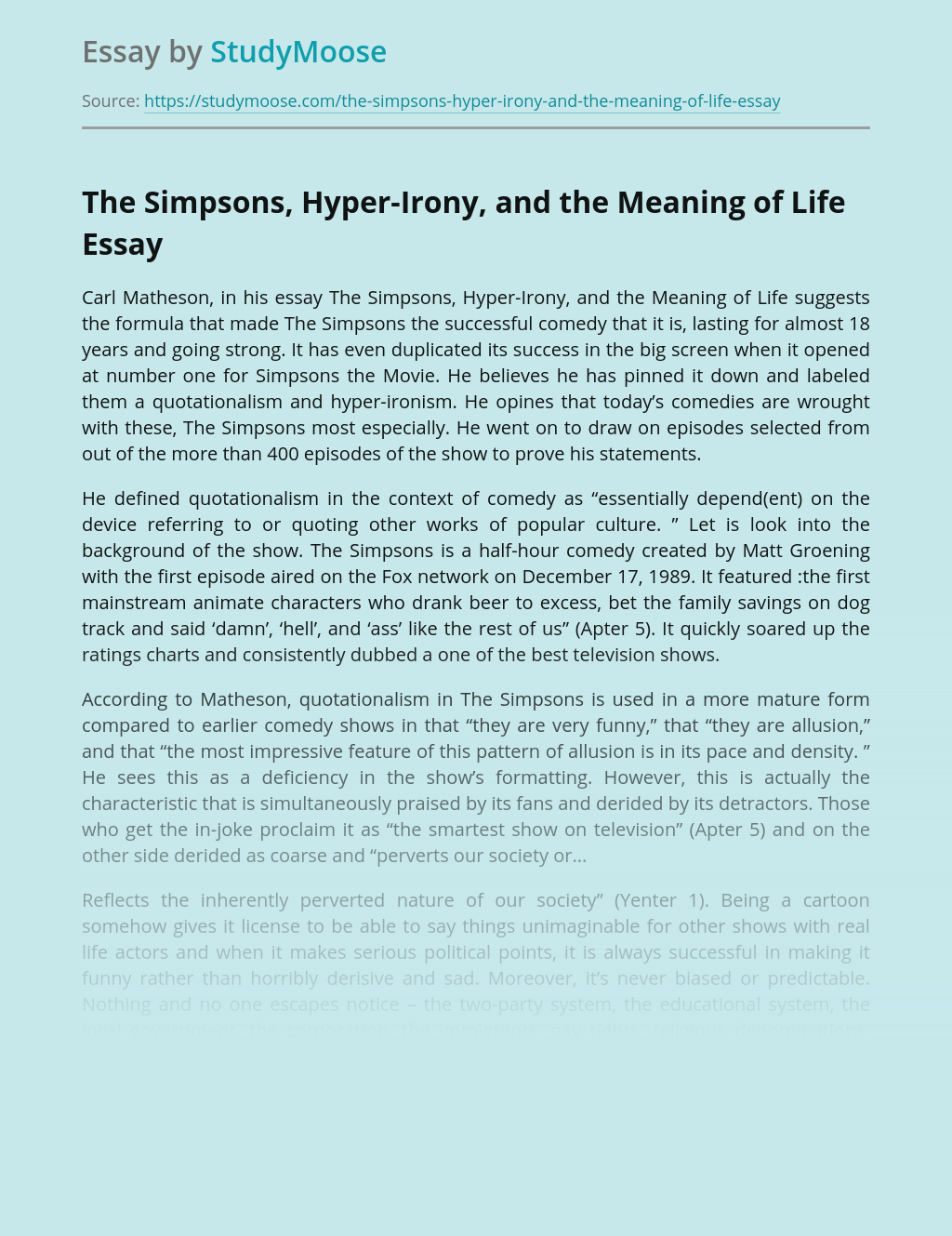 Turn in your highest-quality paper
Get a qualified writer to help you with
“ The Simpsons, Hyper-Irony, and the Meaning of Life ”
Get high-quality paper
Helping students since 2015
Stay Safe, Stay Original