The Scope of Sociolinguistics

Sociolinguistics is the study of the relationship between language and society. Sociolinguistics is a derivational word. Two words that form it are sociology and linguistics. Sociology refers to a science of society (which is a grouping of individuals, which is characterized by common interests and may have distinctive culture and institutions), and linguistics refers to a science of language (which is a means of communicating information, and a crucial means of establishing and maintaining relationships with other people).

In social dimensions of language, the emphasis is on language.

Don't use plagiarized sources.
Get Your Custom Essay on The Scope of Sociolinguistics Just from $13,9/Page

Micro sociolinguistics explores the way in which society influences the way people talk, ex: creation of a variety of dialects; how they communicate with different social factors, and how language varieties with social attributes such as class, sex and age. 2. Macro sociolinguistics: (sociology of language)

In linguistics dimensions of society, the emphasis is on society. Macro sociolinguistics focuses more on society as a whole in relation to language, that is, the study of language related to how the society treats the language.

Langue and Parole: Saussure defined language as a system of signs that expresses ideas and suggests that it may be divided into two components:Langue which is the whole system of language that leads and makes the speech possible; while parole is the concrete (real) use of the language, the actual utterances.Speech community: it is a group of people who speak a common dialect.Mutually un/intelligibly: Any two varieties which are mutually intelligibly means they are two dialects of the same language, if they are mutually unintelligibly, then they are separate languages.

Any variety of a language characterized by systematic differences in pronunciation, grammar, and vocabulary from other varieties of the same language is called dialect. Ex: New York City English vs. Appalachian English.

It is the phonology of a spoken dialect (the pronunciation of a language), which means a certain form of a language spoken by a subgroup of speakers of a particular language. From an accent of an individual, it can be identified from where the speaker is from regionally or socially.

It is a dialect spoken by one individual. Everyone has small differences between the way he speaks and the way that his /her families speak. So idiolect is creating a minimal dialect. Types of language variation:

It is a variety of a language spoken in a particular area of a country. The differences can appear at all levels: Pronunciation: British English /ka/ — Am Eng. /kar/
Lexis (vocabulary): Bri Eng. gas —- Am Eng. petrol
Morphology (grammar): (غطس) Am Eng. dove —– Bri Eng. dived. Syntax (استعمال عبارة في جملة) Am Eng. i don’t have a book, Bri Eng. i haven’t a book.

It is a variety of a language spoken by a particular group based on social characteristics (wealth, education, profession). Ex: in the United States a variety of American English is called Black English, this variety is associated with lower class, and it is characterized by:

– With becomes d
-West End becomes Wes ‘en
-He/ she likes becomes he/ she like
It has been found that the lower we go in the social class scale, the more we find non-standard variants.

The linguistics variable are those where the meaning remain constant but the form varies. Ex: cat and pussy, they have the same social meaning but different form.

The term social class is used to clarify that society can be divided into different social classes. Different people or groups may have very different ideas about what makes one “high” or “low” in the grading. In general term, they can be divided according to income, occupation, education, behavior, etc. It has been asserted by some sociolinguist as Basil Bernstein that there are two varieties of language to its speakers (an elaborated code and restricted code), and as William Labov’s research about how often the final or pre-consonantal r was sounded in words (the non- pronouncing the final or pre-consonantal r is more prestige than pronouncing it).

The elaborated code is distinguished by the use of complex sentences, high proportion of subordinate clauses, a wide range of adjectives, and adverbs, frequent use of the pronoun I, and complex use of prepositions and conjunctions. This code is tending to be used by the middle and the upper class.

The restricted code is characterized by the use of short and simple sentences, few conjunctions and little subordination, frequent use of the pronoun WE which fosters greater solidarity than an emphasis on I, and limited use of adjectives and adverbs. It is tending to be used by the lower class and it is less formal than elaborated code.

He studied it above 4 levels of speech: casual speech, careful speech, reading, and word list. William found out that people do not pronounce it in the careful speech, which means that speakers want to acquire high status by speaking in that way. In short, the link between language and class is that, the way in which any speaker speaks reflects the class to which he/she belongs to.

The study of sociolinguistics has noticed that there are differences between the man’s and women’s use of language. The words sex and gender are commonly used interchangeably. But many linguists argued that their usage is quite distinct.

Sex refers to the biological and physiological characteristics (boy or girl); it refers to male or female.

Words and phrases that demean ignore, or stereotype members of either sex or that needlessly call attention to gender. It means specific words or expressions that reflect to either man or woman which has been historically prevalent. Man: masculine charm, manly courage, police man, doctor, worker. Woman: feminine hands, women tears, nurse, typist.

The above examples show the sex differentiation patterns in our language are the result of sexism which exists in our societies. With the change of attitudes which we have been seeing in recent times, many words and expressions have changed as: replacing chairman by chairperson, and policeman, by policeoficer. 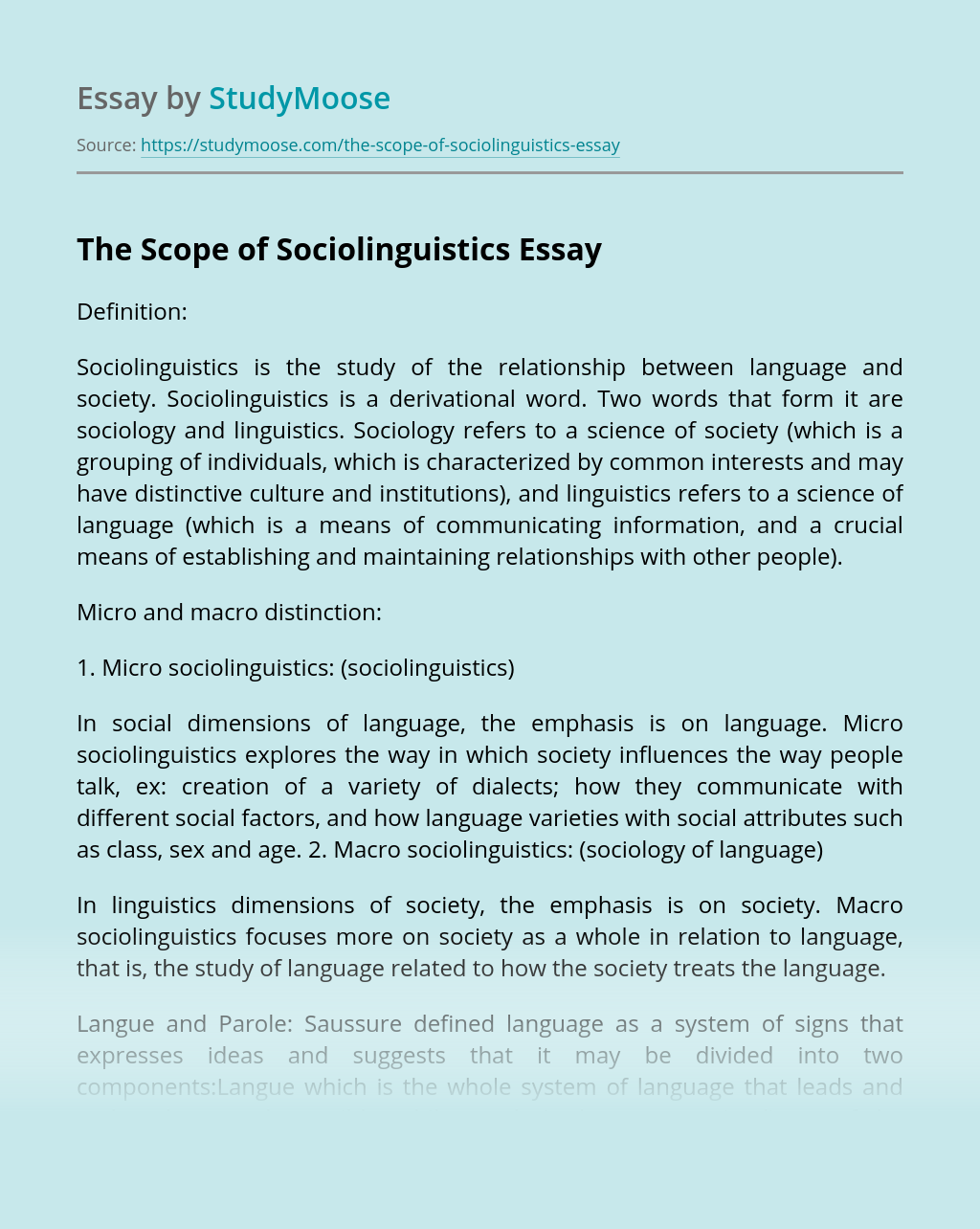 The Scope of Sociolinguistics

Get Essay
Adjectives as Notional Part

Adjectives are the third major class of words in English, after nouns and verbs, that’s why I think that this part of speech is merited detailed consideration. Thus the purpose of my coursework is to examine the adjectives as the notional part of speech. An adjective is a word which expresses the attributes of substances...

INTRODUCTION The book is intended for English language students at Pedagogical Universities taking the course of English lexicology and fully meets the requirements of the programme in the subject. It may also be of interest to all readers, whose command of English is sufficient to enable them to read texts of average difficulty and who...

Lexicology is the study of words-their menanigs and relationships. * English vocabulary is one of the most extensive amongst the world’s lang.contains an immense number of words of forerign origin. * lexicology has to study the etymology of word,e.g.their origin, their development and function * And English is lang.which had changed a lot in a...