The Role of Women in Heart of Darkness

In Joseph Conrad’s Heart of Darkness, despite the disparaging comments made about women by male characters, numerous feminine figures in the story display or exercise a more notable amount of power than the male characters. Joseph Conrad’s Heart of Darkness discusses social issues such as racism, sexism, and corruption. Katkin further emphasizes how, “Chinua Achebe is correct that Conrad provides no voice to the Africans in Heart of Darkness”(par. #). Similarly, he doesn’t provide it for women. Yet, the power possessed by the female characters closely relates to how paramount these women are in the development of the story and plot.

Don't use plagiarized sources. Get your custom essay on
“ The Role of Women in Heart of Darkness ”
Get custom paper
NEW! smart matching with writer

Initially, Marlow commences by referring to female characters found in the story as girls and does not call them women. Although some may think this is unimportant, Marlow’s comments demonstrate an automatic response from the male sex to view women as infantile or miniscule. Furthermore, a vast number of females are interchangeable as the “female” stand- in.

Some readers refer to this as Conrad demeaning those women and making them seem secondary characters. Marlow speaks, “Girl! What! Did I mention a girl? Oh, she is out of it—completely. They—the women I mean—are out of it—should be out of it” (Conrad 108). Those women are being diminished and their role of power is being stripped from them, not only in Joseph Conrad’s Heart of Darkness, but the world in which they lived in at the time. During the Victorian Period, women did not have as many privileges as their male counterparts.

Women during this time lived in the shadow of their men. In most cases, they were thought of as weaker, fragile, or slower. Furthermore, the Victorian Period was vastly what would be referred to as a patriarchal society. “Patri” derives from the Latin word “pater,” meaning father. Patriarchy is a social system in which a male-dominated power structure takes place. For instance, women did not obtain the right to vote, that did not happen until years later. Women were not allowed to own property, but men could possess as much as they longed for. To sum up, it is a system in which men have more power than women; men have some level of privilege to which women are not entitled.

Ironically, power never works in a way we think it does. For example, The Victorian Period was a social culture. People desired extravagant parties, wealth, and social status. Men were mainly responsible for getting things done and lots of women married high-ranking, influential men. Women during this period climbed to power by attaching themselves to influential men. As previously stated, women are portrayed as secondary characters in Heart of Darkness. However, those women who seemed to at first have little to no power, represent more than initially thought when further analyzing the female character.

To begin, Marlow’s aunt is introduced. Marlow begins to speak and displays dismissive sentiments about women through his attitude toward his aunt by saying “It’s queer how out of touch with truth women are. They live in a world of their own, and there had never been anything like it, and never can be” (Conrad 81). Ironically, the aunt holds a significant amount of power. It is because of that woman that Marlow is headed towards Africa. With that being said, Marlow later reveals how he obtained his employment as a steamboat pilot. He reveals that he “set the women to work – to get a job” (Conrad 78). Marlow’s aunt shows much enthusiasm towards her nephew and would love to give him a hand. Marlow is indifferent to her and would only respect his aunt if she can obtain employment for him. Therefore, with her power, his aunt was able to successfully get him a job. Interestingly, Marlow holds his power by attaching himself to a powerful female character. Not Marlow, but his aunt, a female, pulled it off better than he could ever and she is the only reason he had a job in the first place.

To continue, the knitting women that appear in Heart of Darkness also are imperative to the plot. Marlow arrives at the Company’s office where he comes face to face with two other women, who “knitted black wool feverishly” (Conrad 79). Additionally, Marlow describes the old women,“She seemed to know all about them and about me, too. An eerie feeling came over me. She seemed uncanny and fateful” (Conrad 80). The women only appear briefly but hold a symbolic meaning. The knitting women correspond to the Moirae – the ancient Greek personifications of fate. These powerful women spin, measure, and cut the thread of life. The Fates, who were in the Company’s office, were measuring Marlow’s life as he embarked on the journey. The Fates are immortal beings who have the ability to see every man’s fate, thus making them very powerful. Once again, what appeared to be secondary female characters suggest that femininity is a powerful force.

She walked with measured steps, draped in striped and fringed cloths, treading the earth proudly, with a slight jingle and flash of barbarous ornaments.She carried her head high; her hair was done in the shape of a helmet; she had brass leggings to the knee, brass wire gauntlets to the elbow, a crimson spot on her tawny cheek, innumerable necklaces of glass beads on her neck (Conrad 118).

From Marlow’s description of his African mistress, anyone can point out the powerful presence that she holds. She seems to have influence on Kurtz and has him hooked. It’s ironic to think of the men’s way of thinking during this time, when they would refer to women as lesser beings. Men would never admit it, but men need women in more ways than one. From the detailed description given about Kurtz’s mistress, a reader can easily point how much of a trance he is in while admiring her beauty. More often than not, beauty is all it takes to lure in men; they will be in a trance and infatuated. That is where women hold power over the man and could get him to do anything. Notably, the Russian sailor recounts to Marlow how “she got in one day and kicked up a row about I wasn’t decent… I fancy Kurtz felt too ill that day to care, or there would have been mischief” (Conrad 118-119). From this textual evidence, it can be inferred that the mistress has power over her man and gets things done her way.

Moreover, the final notable female character in Heart of Darkness is the Intended. The Intended was Kurtz’s fiance. Kurtz’s fiance waited for Kurtz in Belgium while Kurtz was in the Congo gathering ivory. Marlow later visits her more than a year after Kurtz’s death. Marlow describes their encounter by stating that “She had a mature capacity for fidelity, for belief, for suffering” (Conrad 128). His fiance seems to still be in mourning. When Marlow visits Kurtz’s fiance he lies to her about Kurtz’s final words.

Additionally, the Intended represents a symbol for colonialism. For example, she is utterly infatuated with Kurtz and only remembers the Kurtz that she knew not the one who did tasteless things. She recalls, “I am proud to know I understood him better than any one on earth” (93). This textual evidence shows how the Intended is the Europeans; they believe in the greatness of men like Kurtz without knowing the dark and hidden parts of their characters much as the mistress did when remembering Kurtz.

To conclude, Heart of Darkness is a densely male dominated story which undermines women, yet women are paramount to the development of the plot. Marlow’s aunt, the knitting women, and Kurtz’s mistress all hold a grip and power of the men in Heart of Darkness. The protagonist, Marlow, often encounters these women at landmarks of his life. Marlow continous to believe women should stay in their own world and stay out of the man’s world. Even if this new lense of viewing the roles of the women in Heart of Darkness is not convincing enough it is intriguing to ponder and relate to this in this century and in real life. With this in mind, after further analyzing Heart of Darkness, the female character are far from powerless in this Conrad classic.

The Role of Women in Heart of Darkness. (2021, Apr 19). Retrieved from https://studymoose.com/the-role-of-women-in-heart-of-darkness-essay 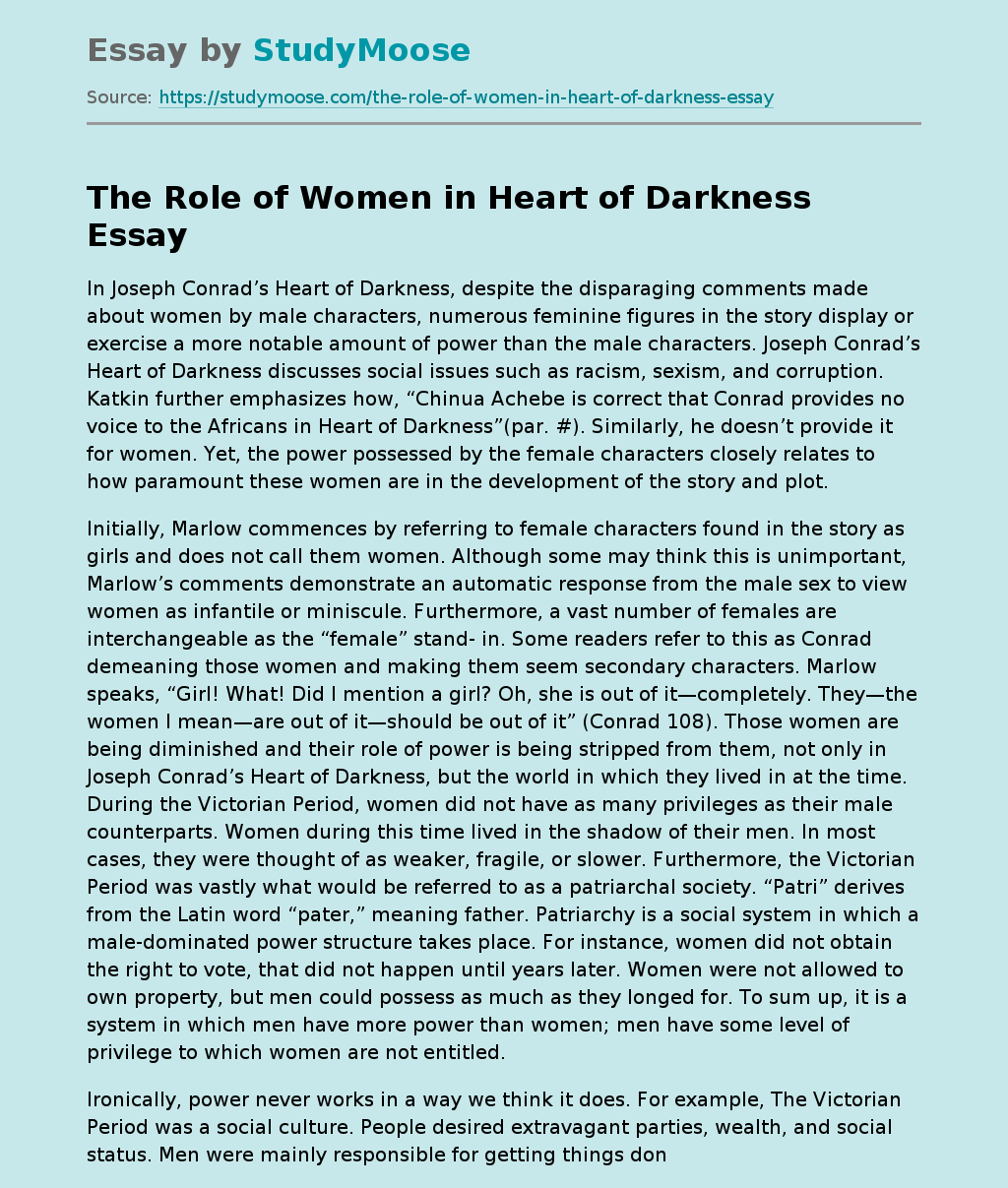