The Role of Women and African Slaves in the American Revolution

Throughout history both women and African slaves have fought for their place in the United States, however the American Revolution was the first stepping stone for both the African slaves and the women as they offered support in the fight for freedom. In the American Revolution, both African slaves and women played climacteric roles of support in the war that lead Colonial America to gain independence from British rule, through the pretense of eventual hope of gaining both liberty and freedom in the New World for themselves.

Don't use plagiarized sources. Get your custom essay on
“ The Role of Women and African Slaves in the American Revolution ”
Get custom paper
NEW! smart matching with writer

During the American Revolution thousands of women took an active role in the American armies, mostly stationing themselves at military camps to offer support to their male relations. Women’s roles became more valued for their aid in the Revolution and were under the idea of “Republican motherhood” or mothers for the new nation. Most of these women, who participated in the American Revolutionary War, were wives and daughters of officers or soldiers. These women who maintained a almost constant presence in military camps, became known as “Camp Followers.

1 Women were considered to have little military function during the war, therefore their individual names were never listed in the records of the Stony Point Battlefield.

Although it is supposed that the women’s duties as camp followers consisted primarily of cooking, mending, laundry, childcare, and nursing the sick, many other women found themselves in extraordinary circumstances that allowed them to take up active military roles as both soldiers and military officers. Margaret Cochran Corbin was one of these remarkable women in the Revolutionary period. Margaret Corbin was the wife of John Corbin, an artilleryman in Captain Thomas Proctor’s 1st Company of Pennsylvania Artillery. As a camp follower she followed her husband’s example and was taught how to load and fire cannons gained the respect and admiration from the other artillerymen in the Company. On November 16, 1776, Margaret assisted in the battle at Fort Washington, New York. “Molly”, as she later became known, stood on the front line with her husband John. In the course of the battle he was mortally wounded.

As a result she assumed his duties as matross and was injured herself. Once the fort fell she was moved to Philadelphia where she was paroled and later pensioned by Congress. Corbin was later assigned to the Corps of Invalids at West Point where she remained until her death in 1800. Margaret Cochran Corbin is now buried on the grounds of the United States Military Academy. However, Colonial women weren’t the only ones who played a crucial role in the Revolutionary War, along with the Colonial men, African slaves also had a key role in the war for independence. African slaves played a major role in the fight for freedom, through joining the Colonial men in the Revolutionary War. The African slaves made their greatest bid for freedom by taking up arms.

In 1775 Samuel Johnson, English writer and dictionary maker, asked “How is it that we hear the loudest yelps for liberty among the drivers of Negroes?”3 This question further proves the African slave’s drive for their freedom, not only were they fighting for the Colonist’s freedom, but they were fighting for their own freedom from the Colonists. On April 19th, 1775, a Lexington slave named Prince Easterbrooks was one of the first persons shot at Concord Bridge.4 He survived and went on to fight in nearly every major campaign of the Revolution. His presence at these battles was not unusual, many other African slaves also followed in pursuit as they joined the armies in hope of gaining their freedom.

Both Colonial women and African slaves sought independence and freedom in the New World, and had many hopes of finding a higher status in the Americas. Women began to have ideas of how the revolution stimulates hopes and expectations for equality and freedom. In some cases they even gained voting rights, however overall the revolution only lead to a limited gain of status. The same could be said of the slaves. Although the slave trade itself was banned and in the Northern states, slavery was abolished, it did not completely remove slavery and make them considered as a “real person.”

Nonetheless, the ideals of the revolution inspired women and slaves for equality, freedom and independence that would contribute in the future. The slaves believed that since they were fighting in the armies they would be given more freedom. However, this was a dream that would never come to be realized, as the both the Colonial people and Britain were not willing to allow their source of free labor to be released.

The American Revolution significantly affected aspects of slaves and the status of women. It provided slaves with an opportunity to escape their bondage through joining the army, while it gave women an opportunity to proclaim a more public role in society. Both of these remarkable groups of people sought to prove themselves, in order to gain a better social standing among the Colonial people, and eventually their dreams were realized. Although their fight for freedom took place long after the fight for independence against Britain was over, the Revolutionary period was a major stepping stone for both the African slaves as well as the women. It gave both groups opportunities to prove their worth to society and create a new image that would help construct a new future for both parties.

The Role of Women and African Slaves in the American Revolution. (2016, Oct 30). Retrieved from http://studymoose.com/the-role-of-women-and-african-slaves-in-the-american-revolution-essay 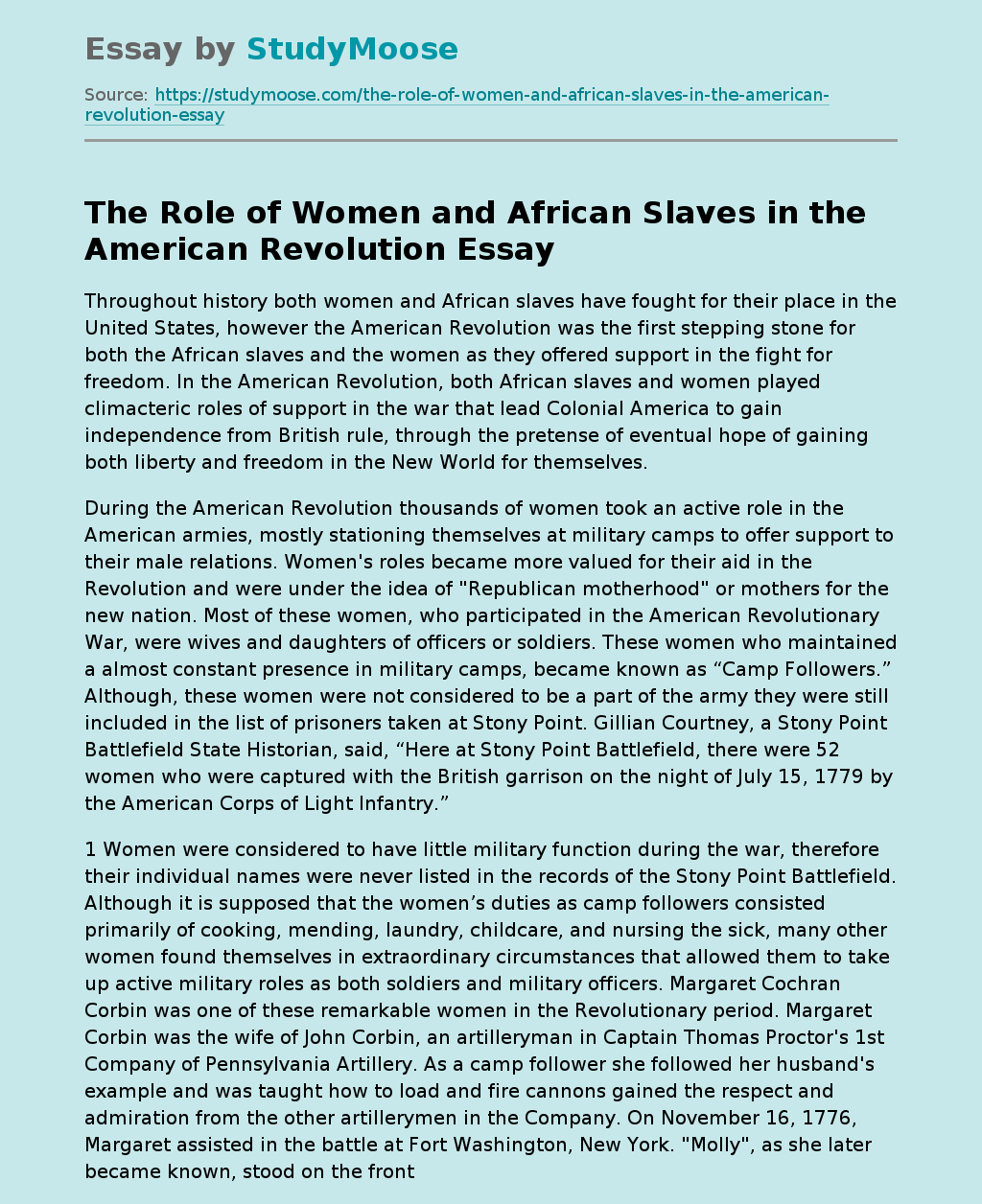