The Role of Federal and State Government

The role of state and local governments has provided a vital role in defining federal relations. The relationship has been defined by a few factors: Congress, the Supreme Court or other courts, and funding policies The courts must address questions concerning the powers of the state and federal government. Early Supreme Court decisions mirrored the views of Chief Justice John Marshall, who favored a strong national government. In defining commerce in the Gibbons v. Ogden case, he argued that Congress’s power to regulate interstate commerce could be “exercised to its utmost extent.

Don't use plagiarized sources. Get your custom essay on
“ The Role of Federal and State Government ”
Get custom paper
NEW! smart matching with writer

” Marshall’s interpretation of the commerce clause provided a way to enforce civil rights laws and regulate wages, working conditions, and other areas that may seem out of reach from federal jurisdiction. Throughout most of the 19th century and roughly into the 1930s, the Supreme Court did not follow Marshall’s lead; it was hesitant to allow an expansion of federal power at the expense of the states.

As the makeup of the Court changed with the appointments made by President Franklin Roosevelt, so did the direction of its decisions. Through their interpretation of the clauses in the Fourteenth Amendment, they brought about a significant transfer of power from the states to the federal government.

In recent years, the Supreme Court limited the powers of the federal government in favor of the states. Congress can make states directly or indirectly do something they otherwise might not do. Congress may also threaten to cut off funds if states don’t implement a particular policy.

Although a law forcing the states to establish 21 as the minimum drinking age may be unconstitutional, Congress can and will threaten to cut off federal funds for certain thing if the states don’t comply. The most powerful tool the federal government has in its relations with the states is money. A grant-in-aid is funding provided by the federal government to the states or municipalities. Federalism has evolved over the course of U.S. history. The balance and boundaries between the national and state government have changed substantially. In the twentieth century, the role of the national government expanded dramatically, and it continues to expand in the twenty-first century. Dual federalism describes the nature of federalism for the first 150 years of the American government. The Constitution outlined two types of government in the United States, national and state.

This type of federalism is also called layer-cake federalism because, like a layer cake, the states’ and the national governments each had their own distinct areas of responsibility, and the diverse layers rarely overlapped. Part of the disputes that led to the Civil War concerned federalism. Many Southerners felt that state governments had the right to make decisions, such as whether slavery should be legal. Supporters of states’ rights believed that the individual state governments had power over the federal government because the states had ratified the Constitution to create the federal government in the first place. Most Southern states eventually seceded from the Union because they felt that secession was the only way to protect their rights. Abraham Lincoln and many Northerners believed that the Union could not be dissolved. The Union victory solidified the federal government’s power over the states and ended the debate over states’ rights. The nature of government and politics in the United States changed dramatically in the late nineteenth and early twentieth centuries.

The national government assumed a larger role as a result of two major events: industrialization and globalization. Federalism over much of the last century has closely resembled more of a marble cake rather than a layer cake as federal authority and state authority have become entwined. The national government has become integrated with the state and local governments, making it difficult to tell where one type of government begins and the other types end. Richard Nixon began supporting New Federalism during his presidency, and every president since Nixon has continued to support the return of some powers to state and local governments. New Federalism appeals to many people because of its emphasis on local and state governments. The Supreme Court has played a New Federalist role by siding with state governments in a number of cases. The most well-known of these cases is United States v. Lopez, the Court ruled that Congress had overstepped its authority in creating gun-free school zones. In other cases, the court has ruled that state governments cannot be sued for violating rights established by federal law. Overall, the Supreme Court in the late 20th century reduced the power of the federal government in important ways, especially in relation to the commerce clause.

The Role of Federal and State Government. (2016, May 11). Retrieved from https://studymoose.com/the-role-of-federal-and-state-government-essay 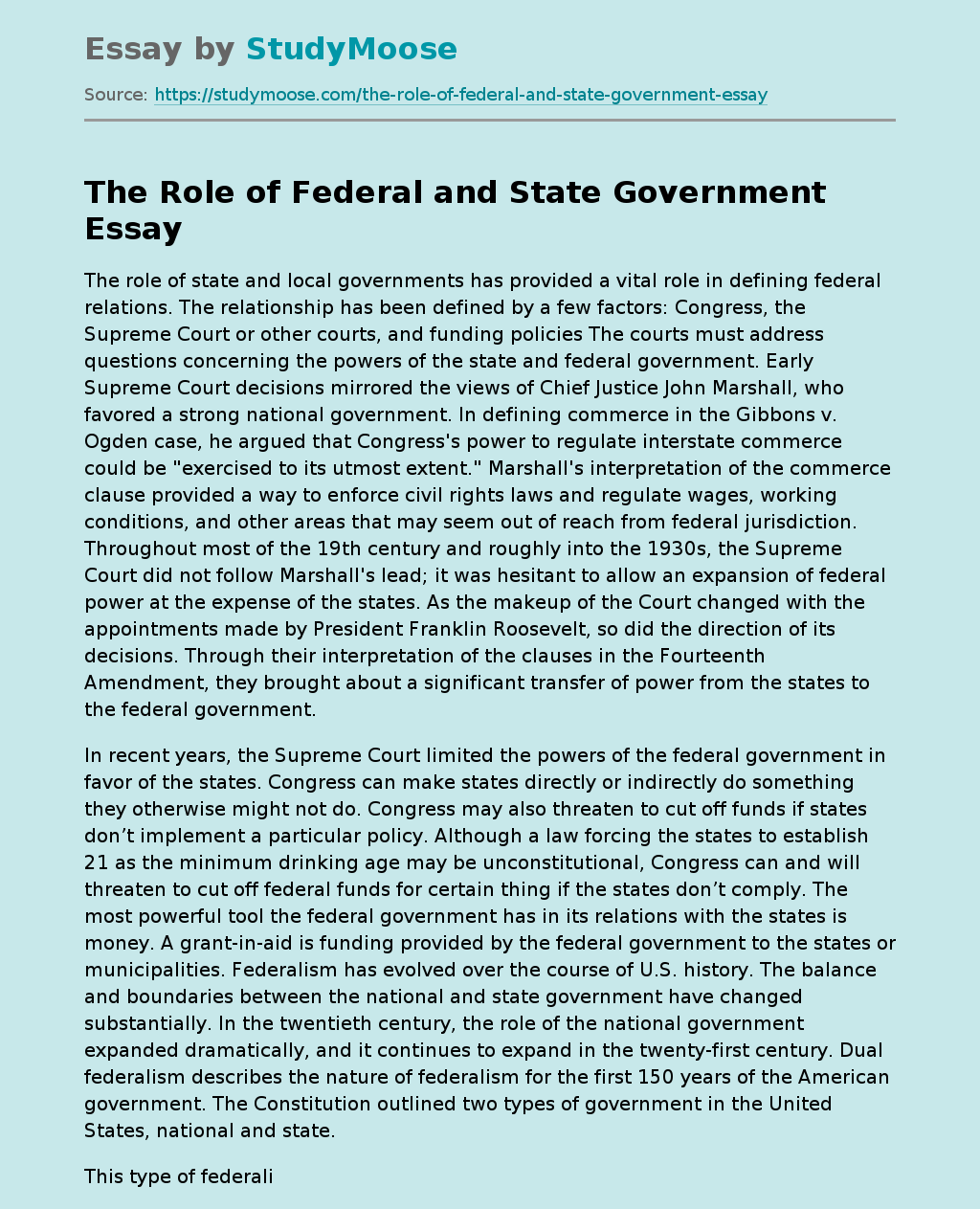