“The Raven” is an exploration into the loneliness, despair, and insanity associated with the loss of a loved one. Through the clever use of structure, repetition and symbolism Edgar Allan Poe manages to draw us into this feeling of morbid despair and with every use of the haunting refrain “nevermore” upon which the chilling cadence of this poem is built Poe transforms a story steeped in sorrow into a tale of supernatural fear and insanity as only he can. Poe uses the very structure of his poem to scream melancholy despair.

The Raven” is written in trochaic octameter. The first and third lines have sixteen syllables each. That makes eight pairs of syllables. The emphasis in these pairs is usually placed on the first syllable. (Once / u / pon / a / mid / night / drea / ry / while / I / pon / dered / weak / and / wea/ ry). It also makes use of internal rhyming,every eight syllables rhyme (Dreary, Weary). In the fourth line, the rhyme from the third line is used to rhyme again in the middle.

Eagerly I wished the morrow; vainly I had sought to borrow From my books surcease of sorrow, sorrow for the lost Lenore. ) The most noticeable rhyme comes at the end of the second, fourth, fifth, and sixth lines in each stanza it’s easy to pick up because it always ends in an “or” sound (lore, door, floor, Lenore, and of course nevermore), meaning two-thirds of the poem ends in the same sound. The meter however is not constant throughout, the last line of each stanza is a lot shorter with only seven syllables and the second, fourth, and fifth lines only have fifteen syllables.

The trick is that in each of the lines ending in an “or” sound, poe leaves off a syllable. That way the crucial “or” sits out there by itself, unattached to another syllable, making it stand out even more. Through all of these little things he makes his poem musical hypnotic and captivating drawing you more completely into this world full of despair and insanity. Poe makes use of repetition to slowly transform this piece from a tale of melancholy despair into one of insanity. Our narrator starts out seemingly hopelessly trying to drown his orrows by any means possible (Eagerly I wished the morrow; vainly I had sought to borrow From my books surcease of sorrow sorrow for the lost Lenore) .

After the raven comes into the picture announcing for the first time that his name is nevermore our narrator seems almost disbelieving ( “Doubtless,’”said I, “what it utters is its only stock and store, Caught from some unhappy master whom unmerciful disaster Followed fast and followed faster till his songs one burden bore Till the dirges of his hope that melancholy burden bore Of Never-nevermore. ) But as the poem continues unraveling he keeps asking the raven questions knowing the answer will always be the same as if he knows this will always be the answer but is trying to deny it (“Tell this soul with sorrow laden if, within the distant Aidenn, It shall clasp a sainted maiden whom the angels named Lenore Clasp a rare and radiant maiden, whom the angels named Lenore? ” Quoth the raven, “Nevermore. ”)

After this goes on for some time his pleas intensifying all the while and the raven repeating nevermore all the while he begins to show signs of madness like a mad scientist on the edge of a discovery. Be that word our sign of parting, bird or fiend! ‘I shrieked upstarting . ) Until finally he seems to just give up and accept his fate (And my soul from out that shadow that lies floating on the floor Shall be lifted – nevermore! ) and back to despair the difference is this time he seems to accept it as a part of himself he knows will never go away. Another literary device that Poe uses throughout his poem to draw us into the feelings he is trying to convey is symbolism. One of the centerpieces of the poem is Lenore.

She is the main focus of our narrators obsessive thoughts. He brings her up constantly and yet despite this we don’t actually learn much about her at all. We don’t know the color of her hair or eyes or much besides her name . He never even specifically brings up their relation. She’s an idea a memory but never becomes a full fledged character even when her presence seems to lurk everywhere in the room in a sense, this Lenore is not anything like a real person because of this I believe her to be a symbol.

At the beginning we learn that Lenore is dead (Sorrow for the lost Lenore For the rare and radiant maiden whom the angels named Lenore Nameless here for evermore. ) Lenore seems to be a symbol for lost loves for all the lost things that bring us despair. She is almost purposefully not described in detail thus allowing us to fill her in as our mind will and pulling us even deeper into the atmosphere of sorrow surrounding the poem. Another big symbol used in the poem is of course the namesake of the poem, the raven.

In most stories and in folklore the raven is used to symbolize death. Poe seems to take this idea and expand it and use it to further convince us of the feelings he is trying to convey throughout the poem. In this particular use of the raven as a symbol he symbolizes not death but comes more in the form of a messenger. Although the fact that he is as black as the night it came out of and adds to the supernatural atmosphere emphasised by the personification of the bird could have been intentional on Poe’s part.

His role as messenger does not escape the narrator who believes first that he is a prophet sent by god (thy God hath lent thee by these angels he has sent thee) but as the raven’s ever present refrain begins to slowly drive him mad he actually comes to think that he is a demon (And his eyes have all the seeming of a demon’s that is dreaming, And the lamplight o’er him streaming throws his shadow on the floor; And my soul from out that shadow that lies floating on the floor Shall be lifted – nevermore! ). Whatever Poe meant the raven to really symbolize it just seems to add to the air of supernatural despair and insanity.

Therefore Poe brings us this feeling of morbid despair and insanity through structure, repetition, and symbolism. His use of trochaic octameter gives the poem an almost musical melody that adds to the feelings of despair Poe is trying to convey. The repetition of the word nevermore almost constantly throughout the poem helps to transition from the despair at the beginning to the insanity in the middle then back around full circle; and through the symbolism of Lenore and the raven he wraps all these feelings in one single package quite nicely that he can bring up over and over again. 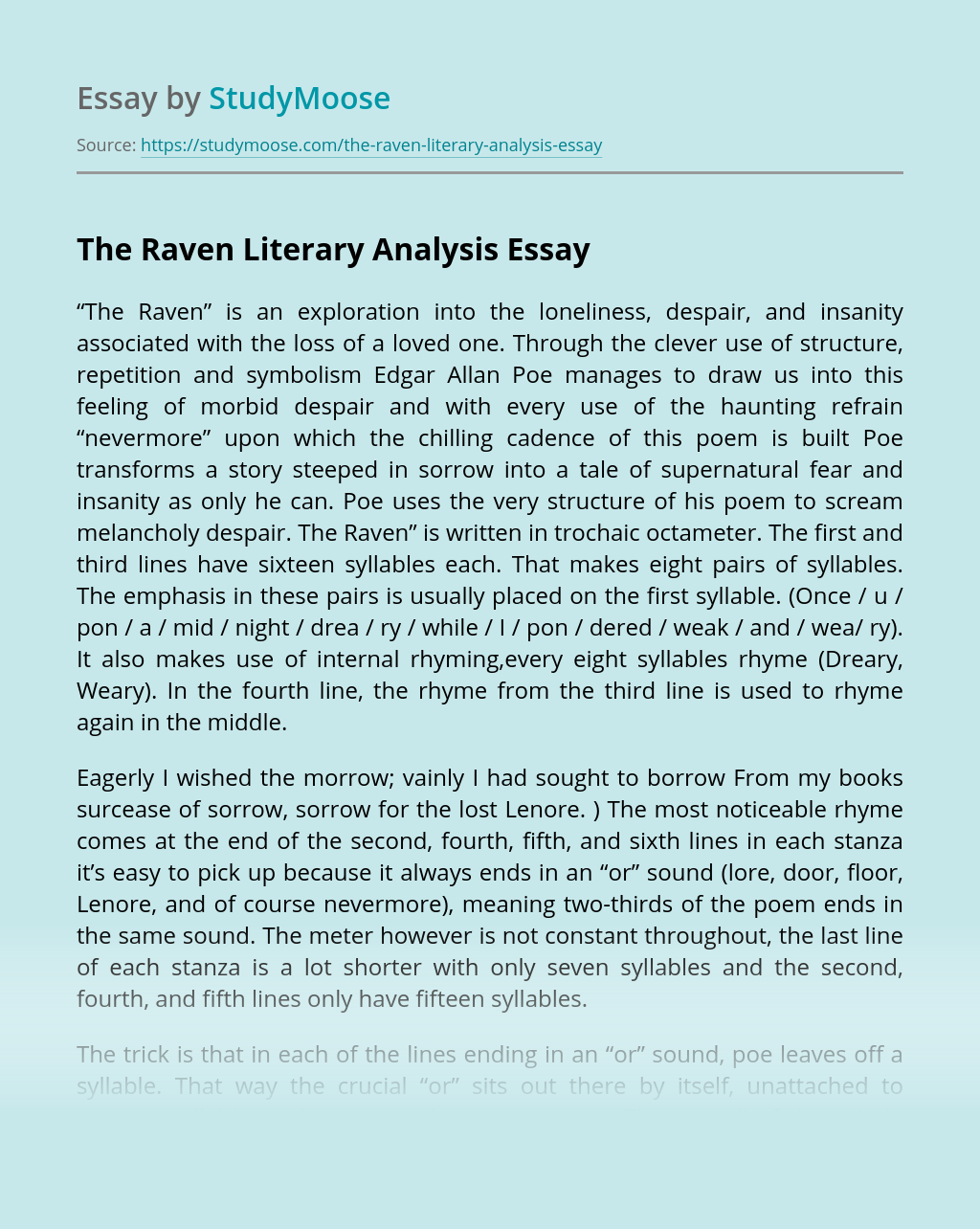 ?We Real Cool by Gwendolyn Brooks

The Poem We real cool. We Left school. We Lurk late. We Strike straight. We Sing sin. We Thin gin. We Jazz June. We Die soon. Summary: This poem was written in 1959, which was in the midst of the Civil Rights Movement. In the case of Brown v. Board of Education, in 1954, the...

Compare ‘Island Man’ with one other poem, to show how the poets use people to explain the conflict that can exist between and within different cultures People are at the centre all communities. They embody the values, customers and ideas that particular culture possesses. By examining how people behave and think, it is possible to...

Introduction Larkin is often portrayed as being obsessed by death, but High Windows is as much about life as it is about death. How true do you find this statement? Larkin was 52 when High Windows was published and the collection is dominated by poems about the loss of youth, time passing and the imminence...