Obamacare as is famously known is Patient Protection And Affordable Care Act(PPACA) or affordable health care. Obamacare or the Affordable Health Care Act was signed into law in March 2010 and was further upheld by the US supreme court in the year 2012.This healthcare act does not whatsoever replace the private insurance, but rather it regulates the health insurance.The affordable health care act has been lauded for having so many benefits.But the most noteworthy aspect of the Obamacare is that, it has brought about cheap and reliable insurance for the US citizens.

Don't use plagiarized sources. Get your custom essay on
“ Patient Protection And Affordable Care Act ”
Get custom paper
NEW! smart matching with writer

The scheme is set to benefit all Americans and those who were not insured will now be covered. However, despite some criticism the Obamacare has impacted in a positive manner in health care.

Among the most commendable benefits of the affordable care act is universal coverage. This act made it possible for people of classes, racial descent in the united states to access health care insurance, and now cannot be denied on the basis of their gender or maybe an honest mistake made during the application process.

Insurance companies cannot also drop you when you are ailing. The act also curbs the unjustified hikes in rates by private insurance companies, thereby inconveniencing low income citizens who cannot cope with such price fluctuations. According to McDonough (2011), there is no other reason that would make an individual to be denied access to medical care insurance other than fraud. Insurance costs are paid by the state for those people living below the poverty line America.

It is the best health care solution for Americans for private short term coverage providers will only offer coverage for a short period and at high premiums after which it expires, but with the Obamacare, there is a maximum coverage at minimal costs. The Obamacare has subsidized premiums, with low taxes and does not frequently have price rises, making it a very cheap medical coverage option for the groups that could not afford private insurance.

However, Obama care has received widespread criticism on its aspect for pre existing condition. The affordable health care act prohibits insurance companies from dropping or denying anyone coverage or charge them more due to their preexisting condition. Insuring people with pre-existing condition is expensive due to the risk involved. Critics have argued that this would force the insurance companies to spread the cost to other clients in terms higher premium rates. But the law also prohibits increased rates, therefore this may lead to insurance companies going out of business or they may adopt or ration care. However, the law is not yet in full effect and the benefits of the affordable health care act or Obamacare in safeguarding those with preexisting conditions still outweigh the demerits as put out critics. Therefore, although the criticism would be taken into consideration, citizens will continue enjoying the benefits of the affordable health care act.

Generally, the Obamacare has encompassed many benefits in preexisting conditions which have enormously helped people with chronic diseases such as cancer. Many cancer patients could not be insured, but now the law is welcome relief for this group of people. According to the CDC many Americans who die of cancer cannot afford its treatment and management. Furthermore, many cancer cases could not be diagnosed early enough as the preventive measures which were available could were costly. However, Obamacare has covered this by making all preventative measures such as check ups, immunizations and screenings are offered at no cost by this act. This measure will go a long way in helping identify and curb chronic diseases which have been spiraling out of hand at early stages where the diseases may be curable. This will reduce the considerable number of American deaths resulting from this chronic but curable disease. Eventually, the health care costs of the chronic diseases will go down and the expenditure incurred in managing the diseases by states.

According to a survey done in all the States, it was found that more than 60% of bankruptcies reported in the United States are medical related. And most of the people who face bankruptcy do so despite having insurance. The Affordable Act puts safeguards to the citizens by eliminating the dollar limits either annual or lifetime previously present. This has great impact on the management and treatment of chronic diseases as the law will protect against bankruptcy by allowing citizens to continue with treatment when they require it. Presently, there is no dollar limit anymore to policies which led to many people being left vulnerable after reaching the dollar limit. Cancer patients will now be able to manage their condition without the fear of the cost escalating past their dollar limit and patients suffering from other chronic illness. Therefore, this protects the consumer financially and safeguarding their right to affordable health care.

Already the ban on annual and lifetime limits is in effect and there are other laws in the act which ensured Americans are protected. Many insurers before could cancel or a policy when a mistake was made during the application process or after determining a preexisting condition. Many people suffered a lot when the insurer cancelled the policy when they needed it most. This will be no longer the case with the Affordable care act which protects the common American from this insurance malpractices. This malpractice is commonly referred as rescission according to the Journal of Health Care for the Poor and Underserved. If an insurer terminates a policy, the consumer has been empowered to appeal to an independent body which will determine if there is a case against the insurer. This law will also halt the indiscriminate price hikes by the insurers in a bid to exploit Consumers and make sure all American citizens access this care when they need it.

Additionally, those with preexisting condition and yet are middle income or low income earners, the Obamacare has guaranteed them access to health care. According to Maynard, The Affordable Care Act (2010) has accorded anybody earning less than 400% of the federal poverty level privileges of earning subsidies on premiums offered in the marketplace where they buy health insurance policies. Moreover, people who make less than 200% of the federal poverty level are also accommodated in the acquisition of subsidized health plans. This assistance and subsidies will aid many low and middle income consumers and businesses to acquire affordable health care. This further adds weight to the free preventive services offered as now after being screened for free treatment is affordable. Before the Affordable Care Act was enacted, private insurers could not cover people who earned below the federal poverty level, thereby locking out millions of Americans from accessing health care. It is estimated that more than 100 million Americans who are low and income and middle income earners have benefited from the Affordable Care Act,and the numbers are still rising as the government has dictated that every American acquire the most convenient health care for them.

The government is laying actions for improved coverage of the health care plan to millions of Americans who were not insured. Some of the measures the government has done to expand the reach of the healthcare plan is letting young adults the age of 26 remain as dependents to their guardian’s health care policy even if they at home, married or still at school. This will help a lot to cover a very huge group of young adults who mostly are not insured until they can be able to purchase insurance themselves or when they get employed. But some private insurance companies have been reluctant and some have declined to cover the young adults as they believe they should acquire individual policies as adults. The government has asked every American to purchase health care or if face penalties in terms of fines. The government and relevant stakeholders believe that this motivates people who are not insured to take up health care plans so as to escape being penalized. Furthermore, this will help them to enjoy the benefits that come with the Obamacare, which are not necessarily present in health care plans offered by private insurance firms.

The Obamacare has been described as a very expensive project to the government and insurance providers. This because covering of people with preexisting conditions is expensive and risky and the insurance providers cannot increase premiums as it is against the existing laws. But, the insurance providers and the government agreed that, for the preexisting conditions to be covered, all qualified Americans must have insurance in order to shield the huge expense of covering those with chronic illnesses. However, Obama care is not expensive in term of premiums as the government introduced an online marketplace where consumers could purchase a health plan that suits them and is affordable. Furthermore, for those who cannot afford to purchase, the government rolled out measures to ensure they get quality and affordable health care too. The government will pay states for those who cannot buy a policy to be included in Medicaid. Therefore, individuals and companies will purchase policies best suits them and still enjoy the Obamacare benefits.

In fact, for any healthcare purchased in the online marketplace or Medicaid, Medicare or CHIP, there are some features that are essential to all these policies and with no lifetime limits. Americans are entitled to emergency services whenever they require. In addition, maternity care, mental care, hospitalization, outpatient, preventive care dental and eye care and prescriptions. These essential services will be provided without any limits to the amount of care received. This will ensure Many of the chronic diseases which are curable are noted early and managed. Therefore saving the country and the consumers more expenditure on their treatment.

In conclusion, it is evident that despite some challenges the implementation of the Affordable Care Act, the benefits that accrue to it are tremendous and revolutionary in health care. The covering of persons with preexisting conditions such as cancer has great impact on health care of Americans who were left out to suffer as they could not afford paying from their pockets. Additionally, the expansion of the health care to accommodate low and middle income earners has made the healthcare be accessed by millions of Americans who prior to that could not qualify for coverage. Moreover, the Act has sealed loopholes that led to Americans being exploited by insurance companies. Insurance companies cannot deny coverage, charge more or put dollar limits to annual or lifetime health care plans as it is prohibited by this Act. Therefore, the Affordable Care Act or Obama Care benefits more Americans than any other health care plan before and should be embraced fully 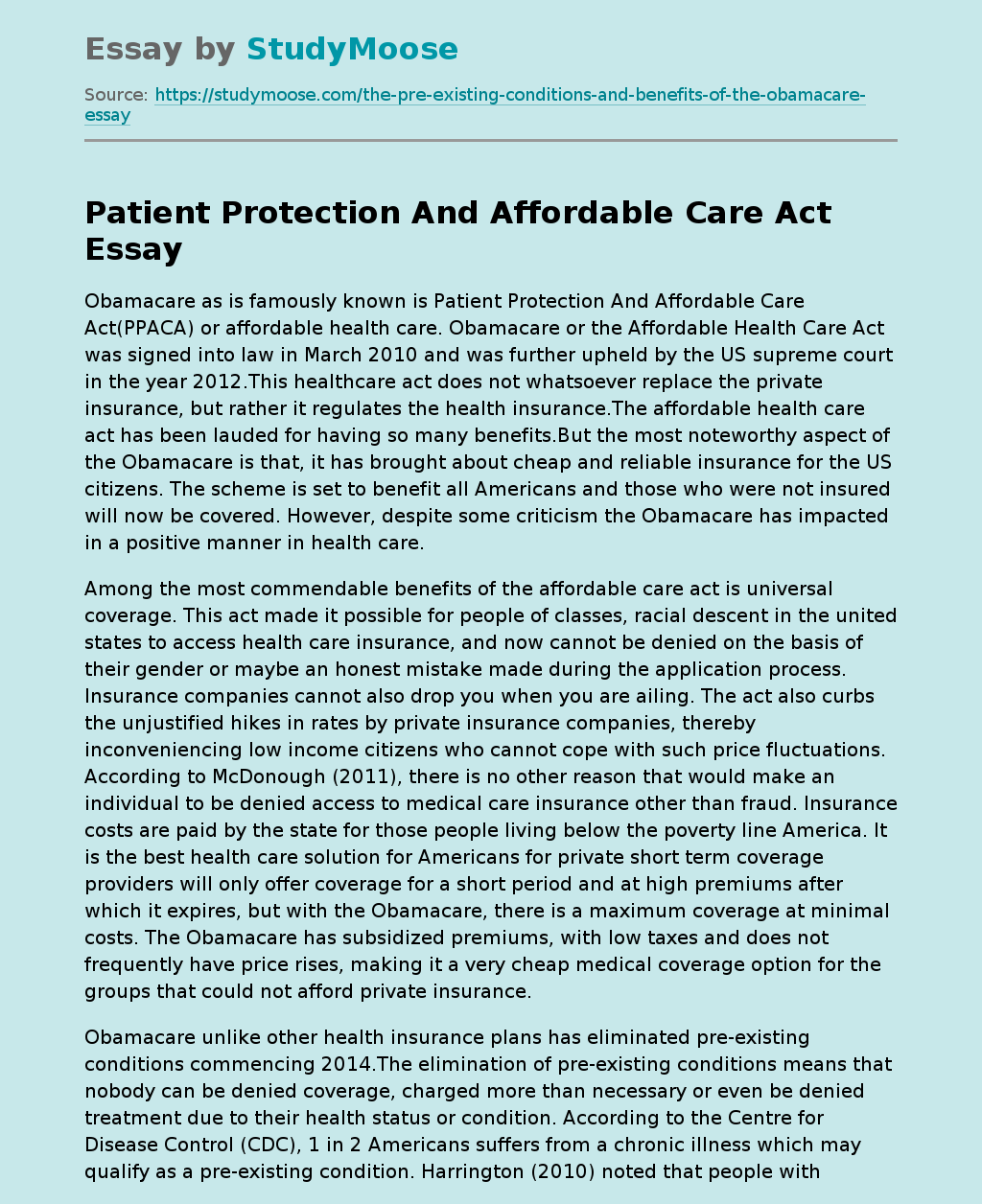